Dutch centre-back linked with Celtic? If the player to fit that criteria is anything to go by, the Bhoys' reported interest in Wolfsburg centre-back Jeffrey Bruma could be much-needed good news for Brendan Rodgers.

Virgil van Dijk was far from a household name when he moved to Parkhead from FC Groningen in 2013. But, after excelling north of the border and with Southampton, he became the world's most expensive defender when he joined Liverpool for £75million in January and has not looked back.

With the Scottish Premiership transfer window open until the end of the month, Rodgers is desperate to bolster his depleted defence and a repeat of that success would be most welcome.

The Bhoys boss is facing a mounting headache just nine games into the season. Celtic have already been knocked out of the Champions League, but they could still have a Europa League campaign to embark on should they make it through the playoff tie against Lithuanian champions Sūduva Marijampolė – the first leg takes place on Thursday evening.

The competition brings with it a large number of extra games and Rodgers will be desperate to go deep in the competition having arrived in Glasgow with the remit of bringing European progress.

The Hoops have had problems in recent weeks at centre-back with reported Fulham transfer target Dedryck Boyata, who would normally be first choice alongside Kristoffer Ajer.

Having impressed at the World Cup with Belgium, the former Manchester City youngster appears to have decided he has outgrown Parkhead.

Rodgers was disappointed that his defender didn’t make himself available for Celtic's Champions League qualifier at AEK Athens, commenting that the centre-back’s absence made him “sad” and that he had to put his faith in “players who want to be here”.

It’s for this reason Bruma – someone Rodgers will know from his time as a youth coach at Chelsea, the side Bruma joined from Feyenoord as a 15-year-old – is a Celtic transfer target.

As is the case with many Chelsea youth products, the Dutchman spent much of his early senior career out on loan. He had half a season in the Championship with Leicester City in 2011 before moving to Germany for the first time for a two-year spell at Hamburg.

He was once considered a potential long-term replacement for John Terry, but the Blues dipped into the transfer market for more established players rather than looking to bring through one of their young prospects.

As a result Bruma returned to his homeland to play for PSV in Eindhoven, spending three years with the club and winning the Eredivisie title two seasons running between 2015 and 2016.

His performances in the Netherlands attracted interest from the Bundesliga and he returned to the league to play for Wolfsburg in 2016. He spent much of last season out of action with a knee injury.

Though he returned to the side towards the end of the previous campaign he was left out for the first game of this season – a cup match against Elversberg – last weekend. That only added more weight to the rumours that he is about to leave die Wölfe.

The best period of Bruma's career came during his time at PSV. During this time he gained vital Champions League experience as the Eredivisie club made it to the last-16 in 2015/16, only going out on penalties to Atlético Madrid.

During their impressive displays in the group stage they beat Manchester United at home and secured a draw at Old Trafford, as well as defeating CSKA Moscow and the club Bruma would eventually sign for – Wolfsburg.

He averaged three tackles and three interceptions per 90 in his eight Champions League appearances that season, and that experience could be a boost for Celtic as they look to re-group following their Champions League exit at the hands of AEK Athens. 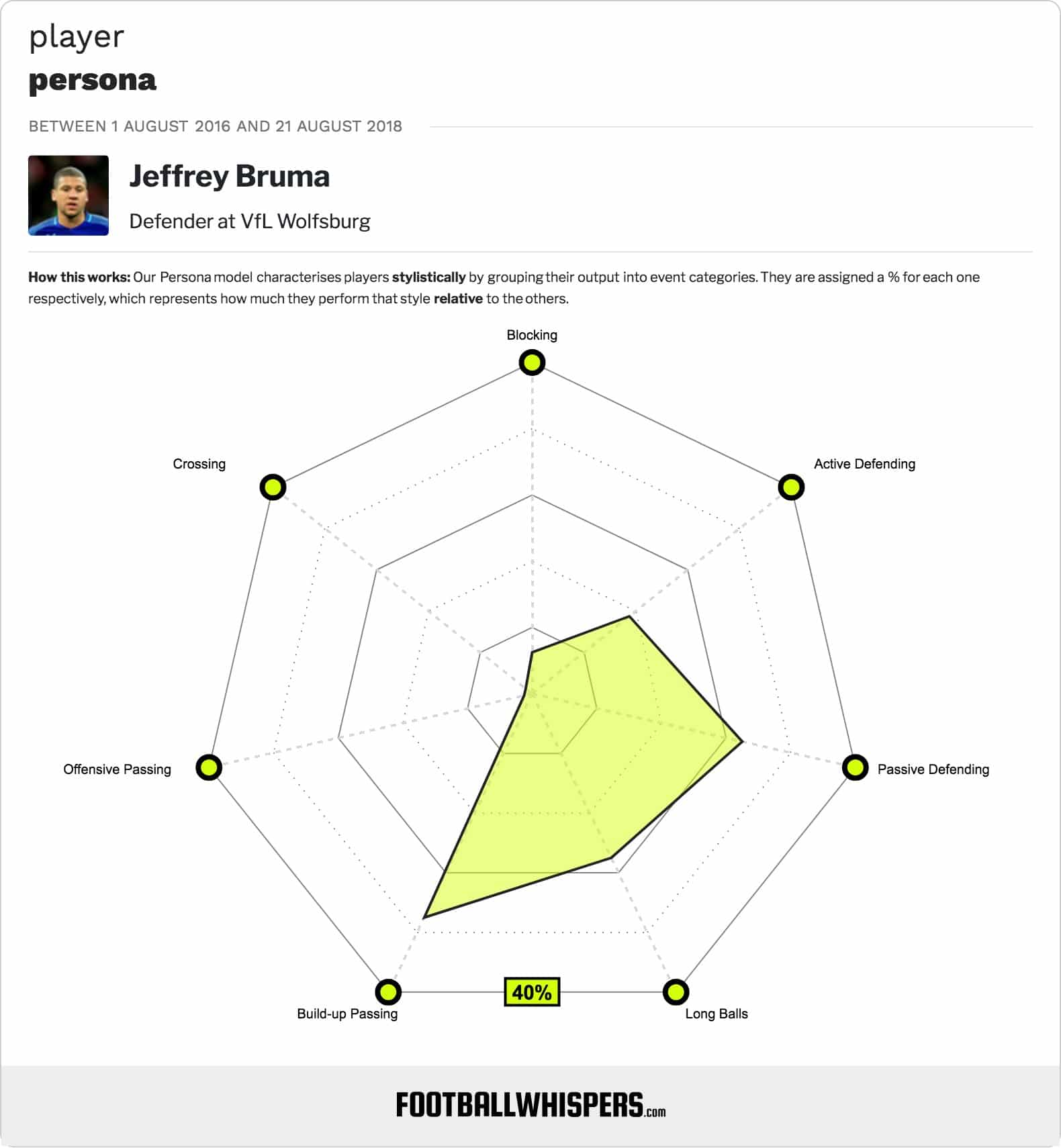 The Football Whispers player persona chart, above, characterises players by their statistical traits and shows a player who is adept on the ball – something which would also be useful for Celtic with Rodgers known for his commitment to a possession-heavy style.

Other than this the 26-year-old is a decent all-round defender who will win his fair share of aerial duels. At 6ft 2ins the right footer is a big presence at the back, and last season won 3.09 aerial duels per 90 minutes to add to 1.36 interceptions and 1.27 tackles.

He also has 25 caps for the Dutch national team where he has partnered Van Dijk previously. If he has taken anything from playing alongside the Liverpool defender he could be just the tonic for Rodgers' growing headache at Parkhead.