Facing Paris Saint-Germain to kick off your UEFA Champions League campaign is already a difficult task at the best of times, but during the summer transfer window, Celtic’s job was made even harder.

As long as PSG are not relegated from Ligue 1, they will spend £166million on the 18-year-old. Throw in Edinson Cavani, Ángel Di Maria and Arsenal transfer target Julian Draxler and you have one of the most devastating front-lines in European football.

Neymar has settled in quickly to life in the French top flight, picking up four goals and four assists in just four games.

Kylian Mbappé take one ! by PSG

On Friday night, we were treated to the first appearance of the MCN, Mbappé, Cavani and Neymar. On paper, with a 5-1 win over Metz, it won’t have filled the Bhoys fans with hope of a positive result on Tuesday night.

Last season, after trying to implement his successful 4-2-3-1 formation on his arrival in Paris, player power forced Unai Emery to resort back to 4-3-3.

There were doubts this would work with the new arrivals, so on Friday night, the Spanish coach made the decision to play 4-4-2.

Cavani and Mbappé led the line and Neymar and Draxler would play the wide roles.

Despite the scoreline, it wasn’t as plain sailing as the away side would have hoped. Metz dug in and gave the Parisians a tough battle. Even at 1-1, former Newcastle United flop Emmanuel Rivière missed an amazing chance to give his team the lead, firing over with the goal at his mercy.

Then Benoit Assou-Ekoto was sent off for what proved on the replay to be a clean challenge. That changed the game and PSG went on the rampage against the 10-men.

Philippe Hinschberger set up his side playing 4-4-2 also. For the most part, it worked, but it also showed the vulnerabilities of facing the Ligue 1 league leaders.

With two lines of four and the wide players on each side keeping narrow, Metz were trying to reduce the space through the centre. This leaves the wings free and regardless of who Emery picks at full-back, they love to break forward.

On Friday, it was Yuri Berchiche and Thomas Meunier, but during the week Layvin Kurzawa and Dani Alves will be in contention.

In the graphic below, you can see that by playing narrow you are giving PSG license to attack down the wings. 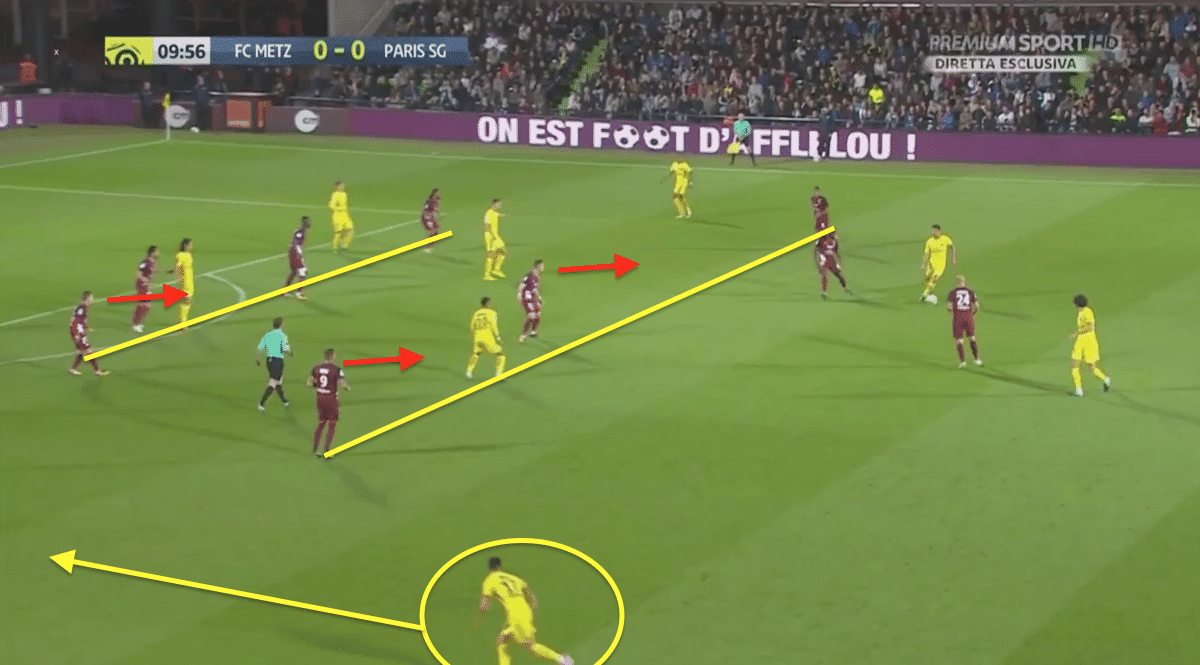 The three players closest to the right flank have their eyes drawn to the ball, giving Yuri space to attack. Lining up in this way will make it difficult for Celtic protect against this.

However, you can’t play wider, as it will leave bigger gaps through the middle and with the world-class movement of Cavani and Mbappé, they will rip you apart. With the quality they possess behind the forwards, especially with Neymar, you are asking for trouble.

Ten minutes later it happened again. This time the Brazil international has managed to collect the ball between the two banks of four. 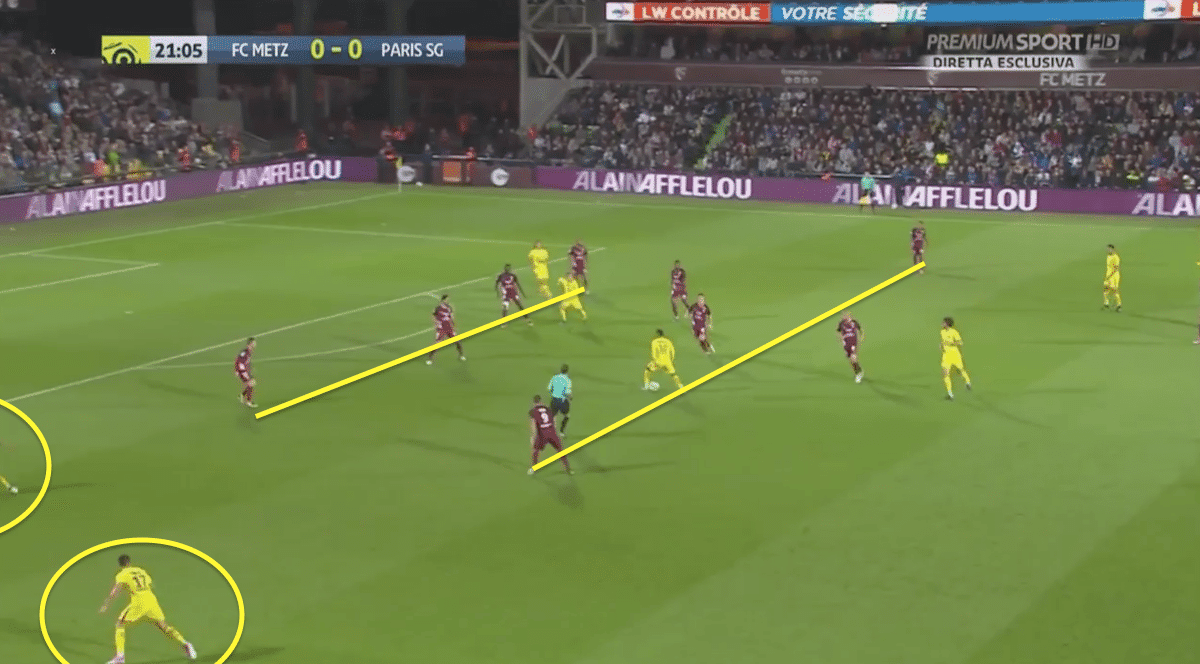 Again, almost giving up the wings, PSG have both Yuri and Mbappé wide left.

Neither the midfielder or right-back have the pace to get across and stop the pass. The French teenager comes inside, gets the ball to the right and through a deflection it spins to Cavani and his flicked shot hits the far post.

Initially, it’s the movement from Neymar which creates the chance. The Brazilian runs from outside to in and takes up that very dangerous gap between defence and midfield. This allows Mbappé to drift into the gap he left and the defenders are unable to track the intelligent movement.

How can Celtic limit PSG’s threat?

One tactic that Brendan Rodgers could utilise would be to play 4-1-4-1 or a variation that puts an extra man in midfield. It’s similar to what Metz tried, but by picking an extra defensive midfielder between the lines and you have a player ready to track the runs made by Neymar.

Rather than follow the former Barcelona man everywhere, you only deal with him when he comes in from the flank. He is now PSG’s chief creative force and the man who makes everything tick.

Rather than worrying yourself about Mbappé and Cavani – they will always get chances – you must try and cut them off at the source. 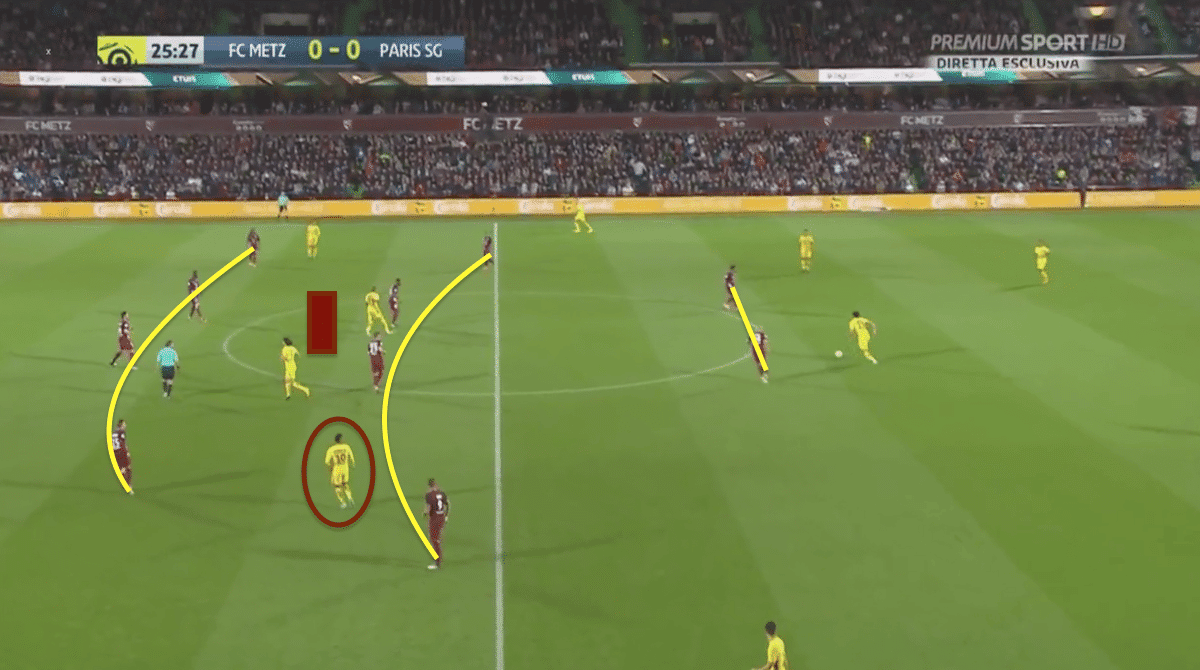 You can clearly see Metz playing 4-4-2, but with how comfortable PSG are on the ball, it’s redundant to have two forwards chasing shadows.

Drop someone into the area in between the defence and midfield and you have a chance of limiting the space in which Neymar can work some magic on the ball.

His starting position is on the left, with the away side looking more like 4-2-4 for most the game. Yet, regardless of who the four attackers are on Tuesday, they will always look to come narrow.

Neymar will drift inside, and rather have the wide players coming infield further, let the defensive midfielder close him down and protect yourself against the runs down the flanks from the PSG full-backs.

Celtic played 3-4-3 on Friday night against Hamilton Accies, comfortably winning 4-1. Partly this is due to their issues at centre-back with Erik Sviatchenko injured. Jozo Simunovic made his return to the team, flanked by Kieran Tierney and Mikael Lustig.

Although this would be a risky system to play against PSG, it could be adapted slightly. Nir Bitton had been deputising at centre-back with others out and he could be the perfect foil on Tuesday night.

Play the Israel international in the hole, let him track Neymar when he comes inside and you also have a player that can operate on both sides of the ball.

The 25-year-old can drop back beside Simunovic, creating a back four and allowing the two wider defenders to play as full-backs. Plus, the 25-year-old can join the midfield and help Celtic win the battle in the middle of the park.

You are never going to fully stop PSG from creating chances for the whole game. That’s unrealistic, but if you can stop them controlling the areas of the pitch where they want to find success, you can frustrate them and limit their opportunities.

That’s what Celtic can hope for, then, like Metz, you know their defence isn’t good enough to stop you from making chances for yourself.

It could be a long night defensively for Brendan Rodgers side, but with this PSG attack still getting used to each other, it’s not impossible that the Glasgow side couldn’t cause an upset. They just need to be extremely well-disciplined and organised. More than they ever have before.