For almost the entirety of the last decade, Scotland have relied upon two goalkeepers: Craig Gordon and Allan McGregor. However, over the last few months, this reliance has been put under severe scrutiny.

The former is 36 years of age and without regular first-team football, while the latter is 37 and recently announced his international retirement. Step up Scott Bain, Celtic's – and potentially Scotland’s – new No.1.

Bain emerged from the winter break as the reigning champions’ first-choice shot-stopper. When he started against Airdrieonians most assumed Gordon was being rested. When he started the next game, a home league clash with St. Mirren, those assumptions were re-considered. Since then he has started every possible Scottish Premiership game.

The 27-year-old’s rise was as strange as it was quick. He joined Celtic on loan last January, making his debut in a 3-2 win over Rangers. But he was only ever seen as cover for the more experienced, and more reputed, Gordon.

Bain previously followed manager Paul Hartley from Alloa Athletic to Dundee, establishing himself as a top-flight goalkeeper in the process. However, while he became one of many fringe contenders for a national team spot, he did make errors. At times his decision-making, positioning and reflexes all appeared questionable, and a falling out with Hartley’s successor, Neil McCann, saw him leave for Hibernian on loan.

That spell was over before it began. Within weeks of moving to Easter Road he was on his way to Glasgow. And, at the expiry of his contract with Dundee six months later, he made his Celtic move a permanent one last summer.

Despite some impressive displays as a stand-in, nobody saw his Parkhead advancement coming. Prior to the winter break, Gordon was undisputed No.1. After it, Bain had taken his place. The reasoning behind former manager Brendan Rodgers’ decision soon became evident.

In their last game of 2018, Celtic lost 1-0 to Rangers. The derby defeat felt like a huge moment in the title race, and it came about largely through the latter’s defensive pressure. Steven Gerrard’s side pressed high and with intensity, forcing their rivals into more long balls than they are used to playing. Consequently, Celtic’s possession on the day was their lowest of the campaign.

Gordon, who has never appeared fully convincing in build-up play, went direct, inaccurately, a lot that afternoon, with the high press he faced emphasised the limitations in his kicking. It’s not too big of a leap to say that this match, with all its significance, paved the way for Bain’s promotion.

The former Dundee man is a much better fit for the ‘sweeper-keeper’ role Celtic require, and in his first two months as No.1 his qualities on the ball have brought a number of benefits to the team’s possession game.

Most of Bain’s passes are short, with a defender – be it Dedryck Boyata, Kristoffer Ajer or Kieran Tierney – his target. Over small distances, his weight of pass is perhaps the most important factor – too slow and the tempo of passing decreases unnecessarily, enabling the opposition to push up; too fast and the receiver may not be able to control it.

Generally speaking, the 27-year-old’s short passing is crisp and accurate, with the receiver rarely placed under undue pressure. Furthermore, over longer distances, he is highly adept at finding his target.

In the graphics below, we see Bain receiving a pass before executing a long switch out to the left wing. He aims for Tierney and finds his man, effectively kick-starting a counter-attack. 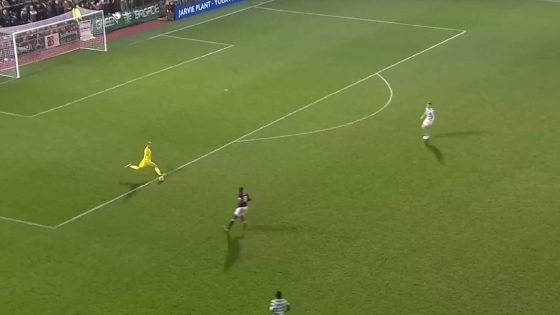 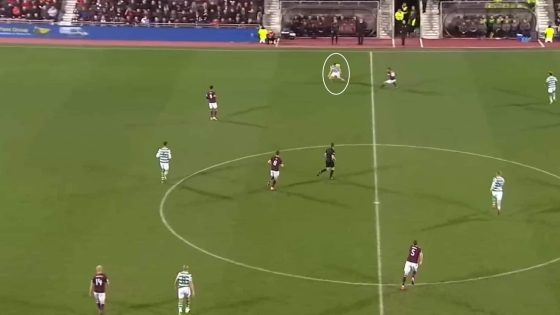 When it comes to the types of pass he plays, it’s worth comparing his statistics to Gordon’s. Firstly, he plays more short passes per 90 minutes (18.8 to 15.2) than his teammate. Secondly, he averages under half the amount of long passes (3.1 to 6.4).

While the two play a similar amount of passes per 90, it’s clear that Bain is more willing and able to go short. What is also clear is that he is a more accurate passer of the ball.

Over shorter distances – especially at a team like Celtic – where high pressure from opponents isn’t so common – it’s difficult to assess which of two goalkeepers is a more proficient ball-player. In line with this theory is the fact that Bain’s short pass accuracy of 97.9 per cent is only 1.1 per cent higher than Gordon’s. However, pass accuracy is put to the test over longer distances. Here, Bain’s 79.5 per cent accuracy is a sizeable 15.1 per cent higher than his positional rival’s.

To summarise: not only is Bain a more decisive short passer, but he is more capable of picking out teammates far away.

He’s also more composed under pressure. So, when the opposition do step up to close him down, he is able to remain calm, control the ball and play short. This allows Celtic to recycle possession rather than going long and giving it away.

In the recent win over his old club Dundee, Bain displayed his confidence on the ball even when directly confronted by an opponent. Below, Kenny Miller steps up to close him while cutting a short pass option. But, rather than panicking and knocking the ball into opposition territory, Bain simply chips it over Miller. 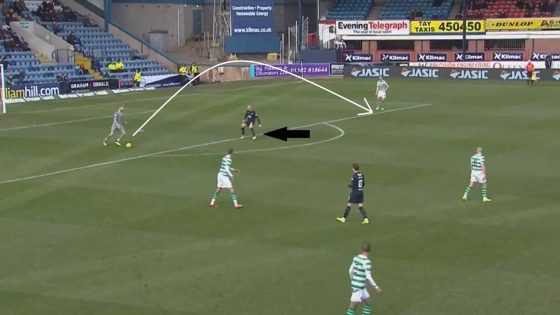 Bain’s confidence on the ball thus allows Celtic not only to keep hold of possession more often, but means they can actively draw out the opposition and create space behind before playing over or around them.

The goalkeeper’s attitude extends into his play without the ball. On occasion he can be seen positioning himself not far beneath the halfway line to sweep up opposition long balls, allowing his team to rebuild from higher up the pitch. He’s also a willing receiver, which perhaps explains why, on average, he’s collected slightly more passes from teammates (15.5) than Gordon (15.3).

Three months ago, Scotland were without an obvious long-term successor to the Gordon/McGregor dynasty. Fortunately, with a strong mentality and good technical qualities, Celtic’s Bain has preemptively solved a potential goalkeeping crisis.