Celtic’s 1-0 defeat to Kilmarnock on Saturday was in part down to the superb job of Steve Clarke and his resolute squad, but it was also an afternoon that underlined Celtic’s utter reliance on certain players within their squad to set up and score goals.

After the game Brendan Rodgers admitted as much. “We could've played here until midnight and not scored. We weren't really threatening,” the Parkhead manager told the BBC. And he’s absolutely right: there’s a huge hole in Celtic’s attacking line and it needs to be plugged.

The Scottish champions struggled to breakdown Kilmarnock’s deepline from the very start, but it’s no surprise that Scott Sinclair’s introduction in the 35th minute for the injured Kristoffer Ajer did return the side to some form of structure and routine.

Against lesser Scottish sides, and to an extent in Europe too, Rodgers has used a possession-based system that prioritises control of midfield and outsourcing the goals and assists to either wing. Which is where Sinclair and James Forrest have worked well to date.

Forrest’s 13 goals and three assists already this campaign suggest he’s having one of the best seasons of his career, with a directness from the right wing that really propels him as perhaps more of an out-and-out forward rather than a traditional winger.

To an even greater extent, Sinclair not only tops the club’s goalscoring charts with 17 goals but also has five more assists than the second-best playmaker at the club this season, Kieran Tierney, with 14. The former Swansea and Aston Villa forward has not only been instrumental in Celtic’s attack from midfield but is very much the creator and scorer of most of the team’s goals.

It’s stats like these that truly underline the complete lack of activity in the pocket of space behind Celtic’s striker and their two flourishing wide players. Celtic lack a genuine No.10 with the grit and consistency to score, assists and win games like the two aforementioned performers in Rodgers’ side.

Stuart Armstrong should be that player. Ever since he was signed from Dundee United in 2015 the attacking midfielder has suggested his best talent lay in driving in to the final third with precision and skill – and that was perhaps most evident from his 17 goals and seven assists last season.

However, the softly-spoken lad from Inverness hasn’t been nearly as effective this time around. That is, in part, down to the problems with his contract negotiations which dragged on until the very end of last year. Armstrong was used sparingly at the start of the season and hasn’t yet got back to former heights.

Last season the 25-year-old was picking up a goal every 200 minutes of game time, yet that figure has now ballooned to a goal every 490 minutes. Celtic already have a No.10 who can score goals like the rest of their front line. He just isn’t up to scratch right now. And the main problem with Armstrong’s lull in form is the fact that the other players tasked with replacing him haven’t exactly done a great job of that either. 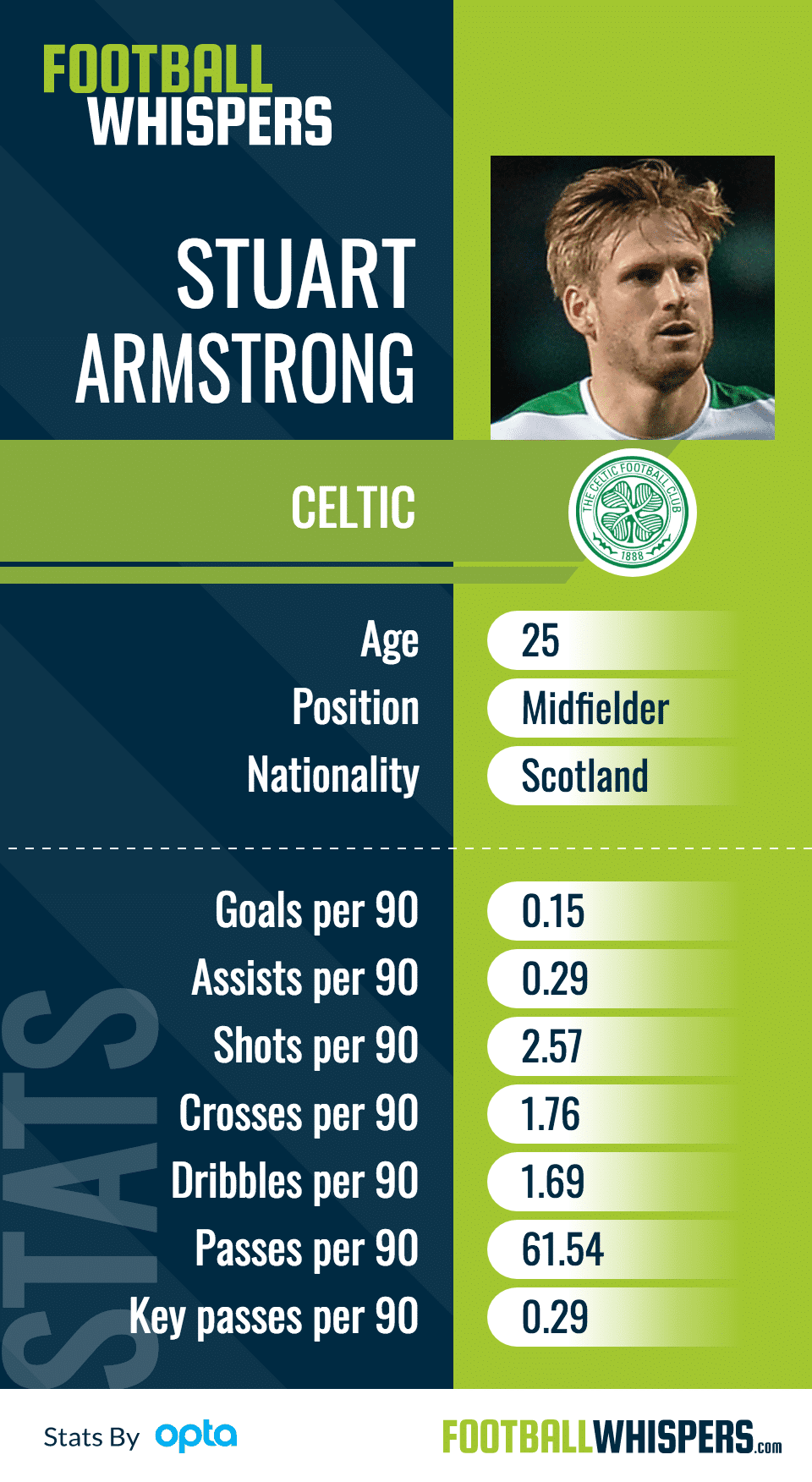 Tom Rogic, perhaps Celtic’s most gifted attacking midfielder, continues to astound and frustrate in equal measure. Last term the Australian picked up 12 goals and six assists and although this season’s return of four goals and seven assists isn’t terrible, the midfielder’s inability to stay fit or remain injury free for any sustainable length of time ultimately makes him unreliable.

Rodgers has turned to Callum McGregor for large parts of this season to fill in for Armstrong, yet that hasn’t entirely worked either. The Parkhead youth product is having a decent enough season, but his talents tend to lie in picking out assists while shying away from the goalscoring that Celtic need from a No.10.

Intriguingly, Olivier Ntcham perhaps offers the best option of a long-term replacement for Armstrong. The French midfielder has a clear eye for goal – with seven strikes already this season – despite spending much of his first campaign at Celtic playing in a more defensive position. Often tasked with a combative role alongside Scott Brown, the 21-year old may find his quick passing and excellent long-distance shooting would be of greater use behind the striker.

The arrival of Charly Musonda on loan from Chelsea may also help in that regard. The young forward started against Kilmarnock in a No.10 role and although he never really got going in the match, he does have experienced playing behind the striker and through the middle of the pitch. A short-term fix, perhaps, but Celtic could certainly use all the goals they can get from that position in the squad.

Whether Armstrong can reclaim his pivotal role in this team or whether the likes of Rogic, Ntcham or even Musonda can snatch it from him is still not clear. But what Rodgers has to ensure is that he finds a midfielder that can lighten the burden on his free-scoring wide players and strikers and develops a No.10 that can help win games when nothing else is working.