There were plenty of success stories from Brendan Rodgers‘ first season at Celtic. On top of going unbeaten while winning the treble there was Moussa Dembélé confirming his status as a star in the making, the renaissance of Scott Sinclair, Stuart Armstrong winning over the doubters, Scott Brown's snarling return to his best and Craig Gordon showing there is life in the old dog yet.

But one case has gone under the radar in particular. That of Croatian centre-back Jozo Šimunović. The 22-year-old is reportedly a Lazio, Burnley, Huddersfield Town and Newcastle United transfer target.

And with good reason. While Celtic only conceded 25 times as they waltzed to a sixth successive Scottish Premiership title, Šimunović was sublime alongside Erik Sviatchenko and deserves all the attention he is getting from other clubs.

When he arrived at Celtic Park from Dinamo Zagreb in September 2015 he was a relative unknown. The then Bhoys boss Ronny Deila was buying potential in the hope the Croatian would prove to be a rough diamond. 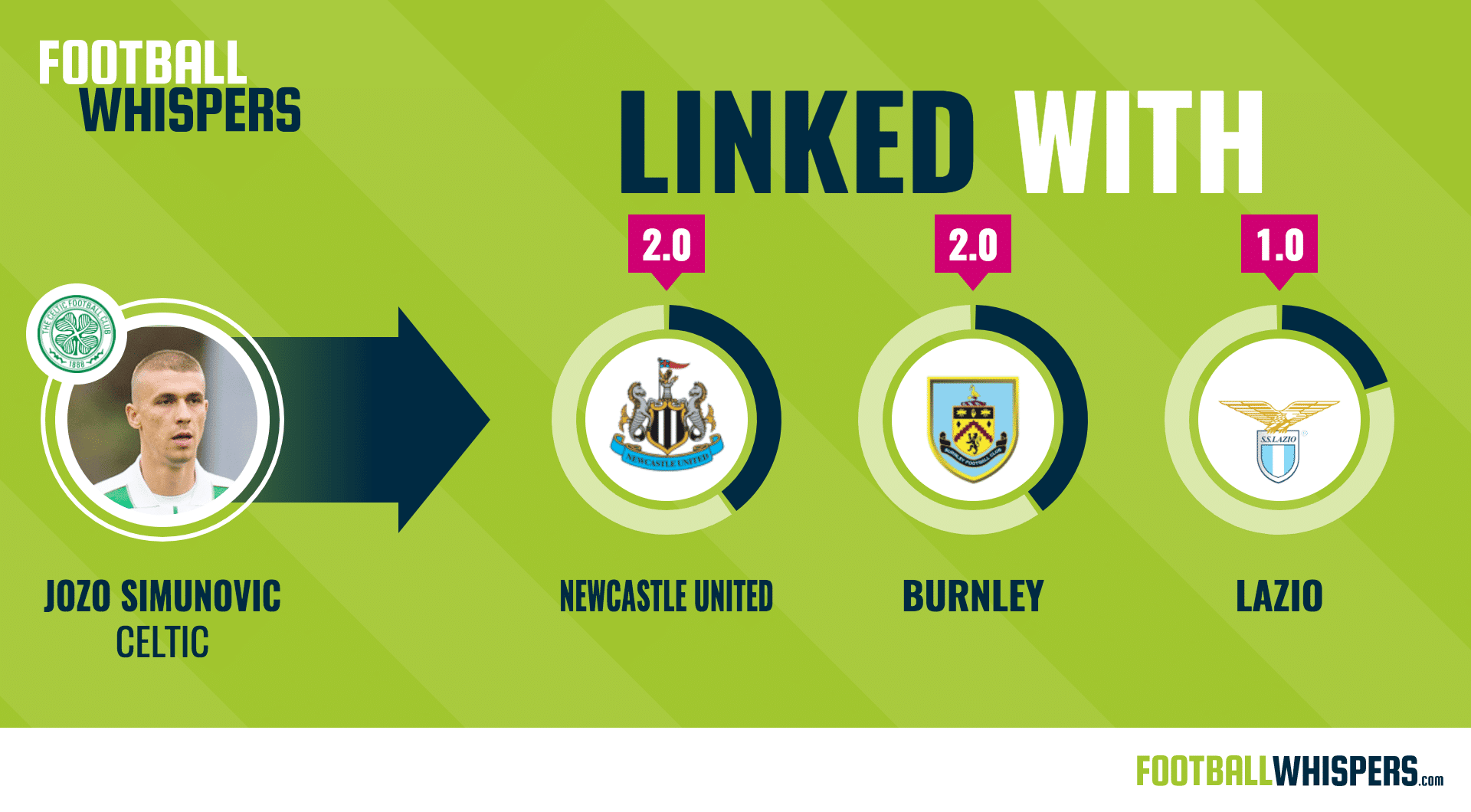 However, in January 2016 he was ruled out for six weeks with knee ligament damage. That became rest of the season and Šimunović later revealed he had been playing with a fracture in his knee for six weeks.

“I know it seems weird that I could play with this injury,” he said. “But everything was down to psychology – and the atmosphere on the pitch was phenomenal. When you play for a great club like Celtic you can play even with a fractured bone.”

He spent time recovering in Belgrade during the off-season but rumours began to circulate Celtic would cut their losses and allow Šiminović to join Torino.

“Italian reports are nonsense,” he said, matter of factly. “I have absolutely no indication about a potential departure for Torino. In fact, I think only about Celtic. Next week I finally join the team, and after a long injury return to normal training.”

Despite that strong rebuttal, Šimunović travelled to Turin to undergo, and subsequently pass, a medical. It appeared the Croatian's time in Scotland was up with injury a major part of that.

However, things changed in an instant for a second time. The following day it was announced the deal was off with the two clubs failing to agree on terms for the player.

Rumours of a failed medical were quashed by the player who returned to Glasgow to find former Liverpool boss Rodgers in situ and fight on his hands to get into the starting XI with Kolo Touré having followed the Ulsterman from Anfield.

To all @celticfc fans.I am contacting you in this way because I can not express myself in 140 characters. pic.twitter.com/yjVecYDEdQ

Fate had intervened and Celtic were about to be grateful for that. Šimunović made good on his promise. Handed his first appearance since injury against Inverness Caledonian Thistle in September, the Croatian Under-21 international's road to redemption began.

“He is a big talent,” Rodgers said after the defender made his first start against Alloa Athletic. “He looks a top player and I am talking more in training than in the games because he only came back the other day at Inverness.

“If you look at his profile, he is 6ft 3in, he is very dominant, strong, quick, can serve the ball and for a young player shows a wonderful mentality.

“He is a player I really like and hopefully he can stay fit.”

And Šimunović did just that. He finished the season having played 31 times in all competitions and one of the unsung heroes of a Celtic side which will go down in history.

What sets Šimunovic apart and what makes him so popular at Celtic Park is he's a defender who likes defending. There are few airs and graces to the player and that is unsurprising given he played on with a broken bone in his knee during his debut campaign in Glasgow.

That was never clearer than when Šimunović flew into a full-blooded tackle in the 5-1 Old Firm win over Rangers in May, upending Gers skipper Kenny Miller seconds after Brown had clattered the striker.

Speaking afterwards, Miller said: “Broony’s Broony so you are not going to complain too much, but he knew what he was doing. The Šimunović one in the first half? Honest to god.

Speaking afterwards, Miller said: “Broony’s Broony so you are not going to complain too much, but he knew what he was doing. The Šimunović one in the first half? Honest to god.

“I was trying to get out the way of it. If I decided to ride it, there was the potential to be hurt. I appreciate he did play the ball, but what’s the term used now – ‘excessive force’? There was definitely excessive force in that.”

His reading of the game is impeccable and for someone who is as much about strength, bravery and aggression, he is good on the ball and refined enough to know when to put his power to use.

Every bit as impressive are his powers of recovery. And the same has rung true of his Celtic career. The question now is whether bids from south of the border will come. But a year on from his collapsed move to Torino, Šimunović has given Hoops fans cause for optimism.

“I always believe things happen for a reason. It was fate,” he said. “I want to be a part of Celtic’s future and I only want to look forward, not back.

“Celtic are a big club in the Champions League and that’s the highest level. We have really good games and I never look at it like Celtic is just a step to somewhere else.”