Player transfers in football tend to be framed as a narrative. You have the start, when the rumours begin, the middle, when a player maybe gives some suggestions as to the proposed move, then you have the end in which the player in question is holding his new club colours high above his head for the local newspapers and photographers.

Of course, in reality, these moves are more like cogs in a much larger machine. One turns and then further down the line another one sets off in motion. At Celtic, where the Scottish champions are calmly going about their summer transfer business, we have a perfect example of that.

This week, Stuart Armstrong is expected to complete his move from the Scottish champions to Southampton. It’s a deal that has been rumoured and then simply reported upon as a matter of fact for some time following a lacklustre season hindered by injury and Brendan Rodgers’ preference for other players.

The midfielder was once a fan favourite – Celtic fans have a very catchy song about the Scottish international’s golden locks – but has become dispensable. And if the club can get £7million for a player with one year left on his contract, fans will quite happily wish him on his way once the cheque has been signed and delivered.

A large part of the ease Celtic fans have towards wishing Armstrong off is the fact that they’ve already turned their attention towards the man the club may sign to take his place in the squad: Hibernian’s John McGinn.

As the beating heart of Neil Lennon’s impressive Hibs side, McGinn has showcased his credentials in leading the Edinburgh side to an impressive fourth place in the Scottish Premiership, with a couple of eye-catching performances against Celtic prompting admiring glances from the champions.

With every commanding, battling match against the Scottish champions, Celtic fans went from irritation to admiration, and many believe the 23-year old is the perfect, long-term replacement for their own commander-in-chief, Scott Brown.

However, suggestions of Celtic being on the verge of signing Brown Mk II are wide of the mark. And although McGinn is a superb player and could be an even better one for Rodgers’ side, he is by no means an ideal replacement for the Celtic captain.

For a start, they’re completely different players. Brown is a holding midfielder who dictates Celtic's tempo in possession similar to Sergio Busquets at Barcelona.

McGinn is a more exuberant presence, with runs across the pitch to get into the opposing box as often as possible. Last season he averaged 0.98 touches of the ball in the opposing box per match. Brown’s average stood at just 0.18.

McGinn is a much more effective attacking presence. The Hibs player scored six goals to Brown’s zero last season, averaged twice as many assists per game, shot 1.98 times per match to Brown’s 0.24 and embarked on 6.52 dribbles per game while Brown, unsurprisingly, only amassed 1.33. 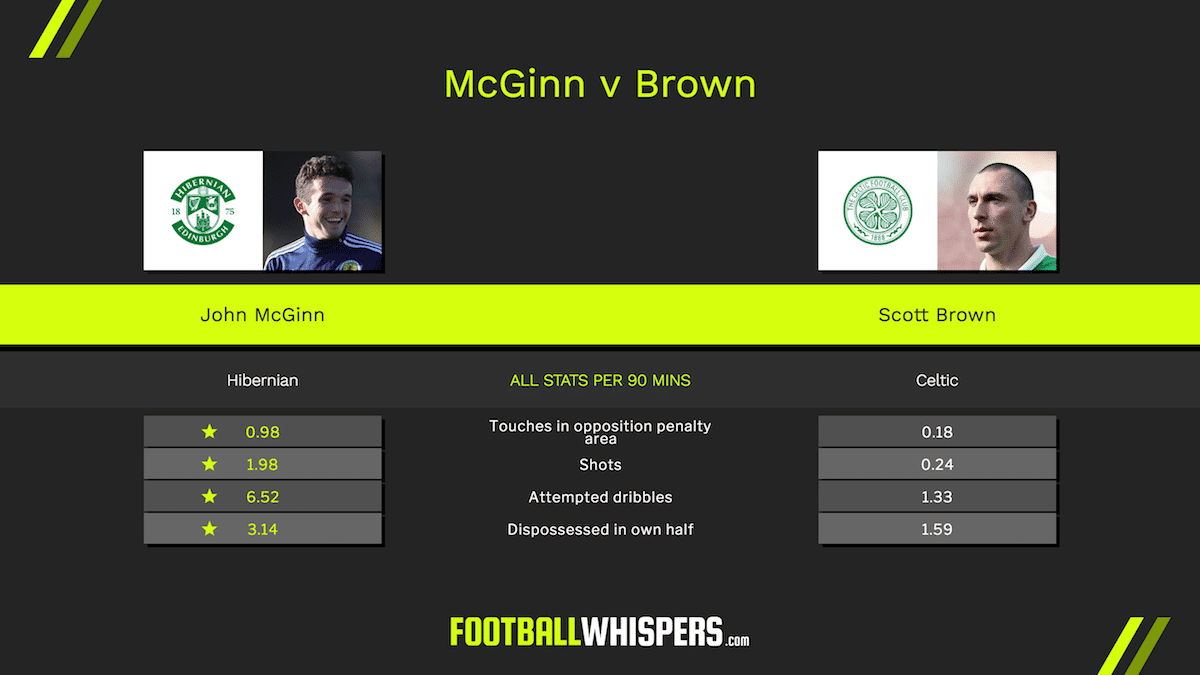 However, whereas McGinn is more influential in the final third, Brown's defensive make-up is more refined.

Despite a shared appreciation for the more physical side of the game and an astute talent for shielding the ball, McGinn isn’t nearly as careful in possession as Brown. The 33-year old’s accuracy for forward passes stands at an impressive 85%, while McGinn’s wavers slightly at 67%.

Similarly, Brown only tends to lose the ball in his own half 1.59 times per match, while McGinn’s average is 3.14. Brown also stands out for averaging almost twice as many tackles per match compared to McGinn and tends to make two more interceptions per game than the young contender.

The Hibs midfielder is clearly a great player but, at this moment in time, he has shown himself to be a fantastic attacking talent who thrives further up the park. And while he may possess the kind of tenacity and confidence that used to have Brown trotting around Easter Road, that doesn’t mean he’s a like-for-like replacement for the talismanic Celtic captain.

The vague comparisons between these two players may seem ideal at first but when we scratch below the surface and really dive into what each of these midfielders thrives at we find that they’re actually completely different.