The response to Celtic’s 2017/18 Champions League campaign has been varied.

Those with a glass half-full will choose to focus on the objective, which has been achieved, of a third-place group stage finish and Europa League qualification. Others may shake their head with disappointment at the nature of the five defeats, particularly the 5-0 and 7-1 thrashings meted out by Paris Saint-Germain.

There is plenty to think about, then, as Celtic prepare themselves for the prospect of European competition beyond Christmas for the first time since 2014/15. Here, we at Football Whispers consider what Brendan Rodgers and his players may have learned from their latest Champions League experience.

Rodgers went with a variation of the 4-2-3-1 system for four of Celtic’s six Champions League group stage games, but a rough 3-6-1 shape was crucial to the team’s finest performance in the competition. At home to German giants Bayern Munich, a surprise win was almost accrued as the Scottish champions created a multitude of scoring chances.

They could easily have overwhelmed their esteemed opposition at Celtic Park that night. Indeed, when Callum McGregor ran onto a James Forrest through ball to equalise, the home crowd must have thought they were in for one of those classic European nights. Ultimately, instances of bad defending cost them dearly, but the statistics told a positive story.

Celtic enjoyed success playing their own way against one of the continent’s finest sides. They reduced Bayern to 53 per cent of possession – the German side average 62.9 per cent in the Bundesliga – and had more shots, just as many shots on target, completed more dribbles and made more tackles.

After the 7-1 defeat away to PSG, Rodgers ditched the 3-6-1 for his preferred 4-2-3-1 for the vital final match against Anderlecht, but the formation didn’t work. Indeed, it was only in the second half – following another switch back to 3-6-1 – that his side managed to compete with the Belgians.

The choice of system may be a fairly basic learning, but it’s a key one. If Celtic want to go deep in the Europa League, they would be best off sticking with the back three, wing-backs and a packed midfield.

DEEP DEFENCE IS NOT (ALWAYS) THE ANSWER

After the opening 5-0 home defeat to Paris Saint-Germain, questions were asked of Rodgers’ tactics. The aggressive defensive style and fluid possession game that had worked so wonderfully against domestic opposition seemed ineffective on that occasion, and led some to consider whether it might be more fruitful to take a more conservative stance in European action.

However, over the course of the six games, quite the opposite became apparent. Celtic were at their best when they went for opponents and tried to impose their own ideas. And, when they tried to stymie by sitting deep, they often struggled to contain their opposition.

The home game against Anderlecht was a case in point. Reluctant to press high, Rodgers’ side deployed a midfield press whereby they applied pressure when their opposition threatened to cross the halfway line. However, this became gradually deeper, making it easier for the Belgians to bring the ball out unchallenged and establish some momentum with their passing.

A more active second half approach paid dividends for Celtic that night, and this should be trusted in future matches. There are times when a deeper defensive block and a defensive press may be appropriate, but they must first eradicate a major flaw in their structure when without the ball…

The amount of space between the midfield and defensive lines was a problem for Celtic throughout their Champions League campaign, and was regularly exploited by the stronger sides in their group. The below graphic, taken from their home match against PSG, showcases their poor structure in the defensive phase. 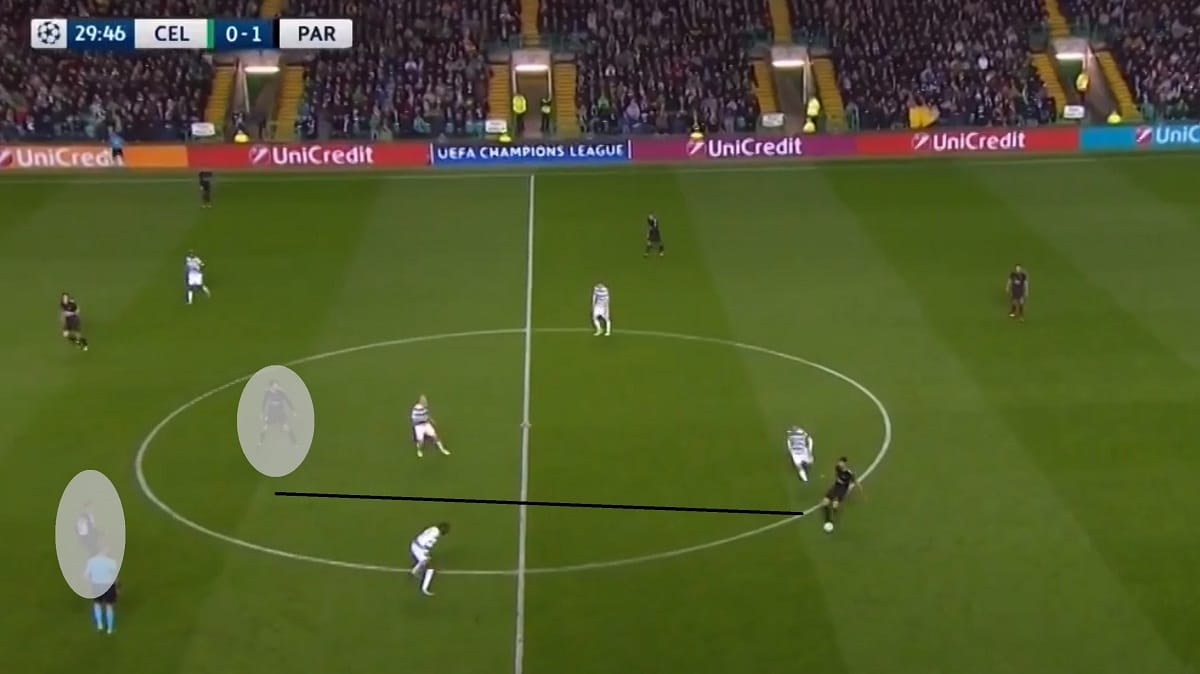 With the midfield resembling one horizontal line there was a lack of staggering. This, along with the gap between them and the defensive line, made it easy for Thiago Motta to pick passes through Celtic’s press and into a dangerous area of the pitch.

If Rodgers does want his side to defend deep in future European matches, there must be a concerted effort to pair this with a compact defensive shape.

While Celtic’s defensive weaknesses were exposed at regular intervals against the likes of Paris Saint-Germain and Bayern Munich, their attacking play was laudable throughout.

Against the latter, their build-up play was particularly exceptional – they played out from the back in a controlled manner, retaining possession and progressing effectively into the middle and final thirds frequently.

With the pressure on to avoid a 3-0 defeat against Anderlecht in the final match, however, they avoided this approach. Craig Gordon went long with the majority of his kicks to avoid the risk of giving possession away in the defensive third, but this only meant the team were unable to establish control in the game.

The quality of Celtic’s passing is not in doubt. Their defenders are, for the most part, comfortable on the ball, while their midfielders – particularly Stuart Armstrong and McGregor – are happy to receive in tight spaces.

Indeed, their pass success percentage during the group stages of Liverpool and Tottenham Hotspur.

Rodgers’ side are a talented possession team, and they should believe in this aspect of their game going into the Europa League. Doing so would at once minimise the flaws evident in their defensive phase while also enabling them to establish control over matches.