Celtic have their very own Philipp Lahm. It's an extreme way of looking at it but in Callum McGregor the Bhoys have a special player on their hands.

A midfielder by nature, he has impressed recently playing as a makeshift left-back. It's the latest in a long line of roles the 24-year-old has been deployed in throughout his career and it comes just weeks after he scored a sublime goal against Zenit in the Europa League.

Others in his situation would have lashed at the ball after bringing it down on their chest but the Celtic No.42 let it bounce before firing it home using his weaker right foot. That calmness in the area can often elude some of the greatest strikers.

When a team has a player with that ability in their squad it seems bizarre to use them in a position so far away from the opposition's goal. But Brendan Rodgers knows what he's doing.

He's had joy throughout his time as a manager tweaking the positions of players. He moved Steven Gerrard into a holding midfield role, played Philippe Coutinho in centre midfield and saw Raheem Sterling's potential as a playmaker at the tip of a diamond.

The Celtic boss understands a player's profile and where he can shine. Rodgers has utilised McGregor as a number six, a number eight, a number ten, a left winger and a right winger. And he's not looked out of place anywhere. He even scored 17 goals for Notts County as a 21-year-old. He really is a Jack of all trades.

That description of a player has negative connotations but, in all honesty, it should be viewed as a compliment. Being flexible and interchangeable in the modern game is a must. If a player is able to excel in a number of roles, not just do a job but really make themselves at home no matter where they are, then they are worth their weight in gold.

The former Liverpool boss acknowledge this recently in an interview with : “He is just consistent, seven or eight out of 10 every week for me, in terms of how he plays. He has this incredible knack of keeping the ball. At international level that is a must.”

“He has got the perfect temperament,” added Rodgers. “He has never missed a day’s training since I have been here. He comes in the team, he plays in big games, he plays at left-back, he plays wide on the right, he is just the same.”

What makes McGregor so unique

It sounds clichéd but the Scotland international's brilliance is down to the simplicity in which he plays the game. He has the ability to slalom past players and jink his way out of tight spaces, in fact it's part of his charm, but they're worst case scenarios for him. Done when it's a necessity.

The Celtic youth graduate is intelligent and he sees the bigger picture. It's why it's so easy for him to manipulate space and shift the tempo of a match without even touching the ball. Without lauding him too much, there's a touch of Thomas Müller about him in the final third.

There was a moment in the game against Motherwell. The ball breaks to McGregor in the middle of the park and the opposition expect the midfielder to take the ball on. They have players in situ looking to stop him from powering forward.

Without taking a touch to set himself, he plays a first time pass forward into Leigh Griffiths. The forward rounds the keeper and hits the post from a tight angle. It's not the sort of thing to make a highlight reel but goes a long way to show just how quick thinking he is as a player and why he's so comfortable in a number of roles.

He makes everything look effortless and easy. There are examples of this below. 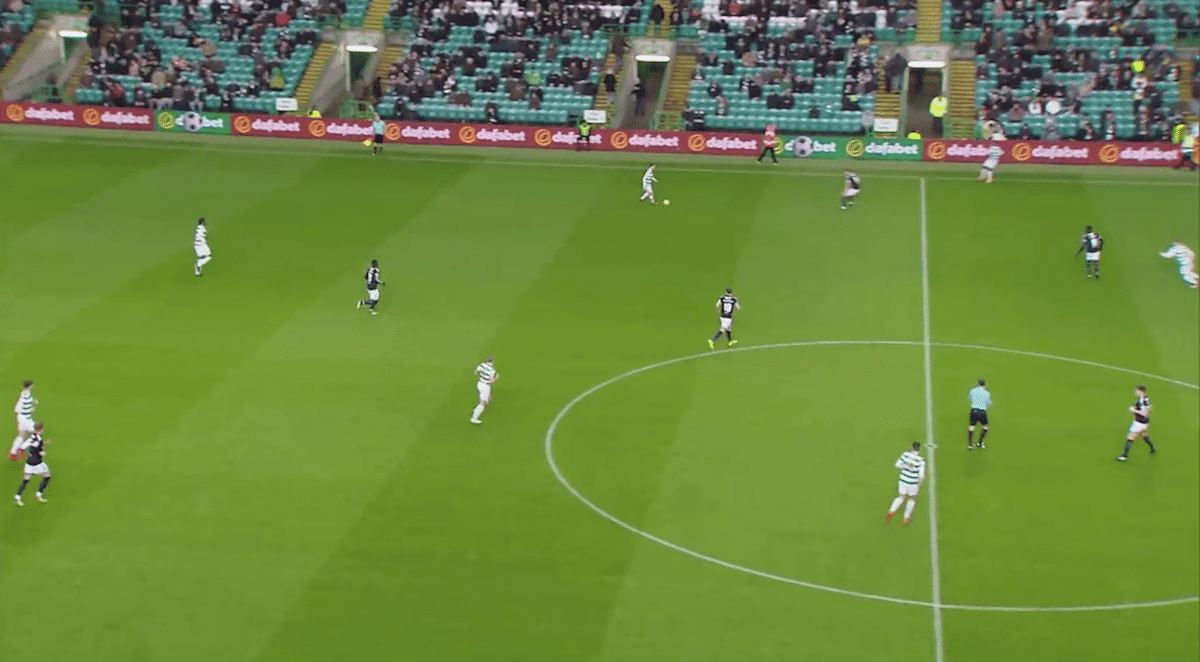 McGregor, playing at left-back, is in possession of the ball against Dundee. There's no obvious pass for him to make and many in this scenario may look to force it.

Players have to make risky passes to help their team progress up the pitch but there are times to do it. The Celtic utility man can see the away side are in a good position to counter if there's a turnover of possession.

Instead of forcing a pass he carries the ball forward, beats the man looking to tackle him and plays a simple right footed pass out wide to Scott Sinclair.

It's not overcomplicated and it's something that 99 per cent of the time goes unnoticed. But it's progressive play and benefits Celtic, all because of McGregor's calm nature. 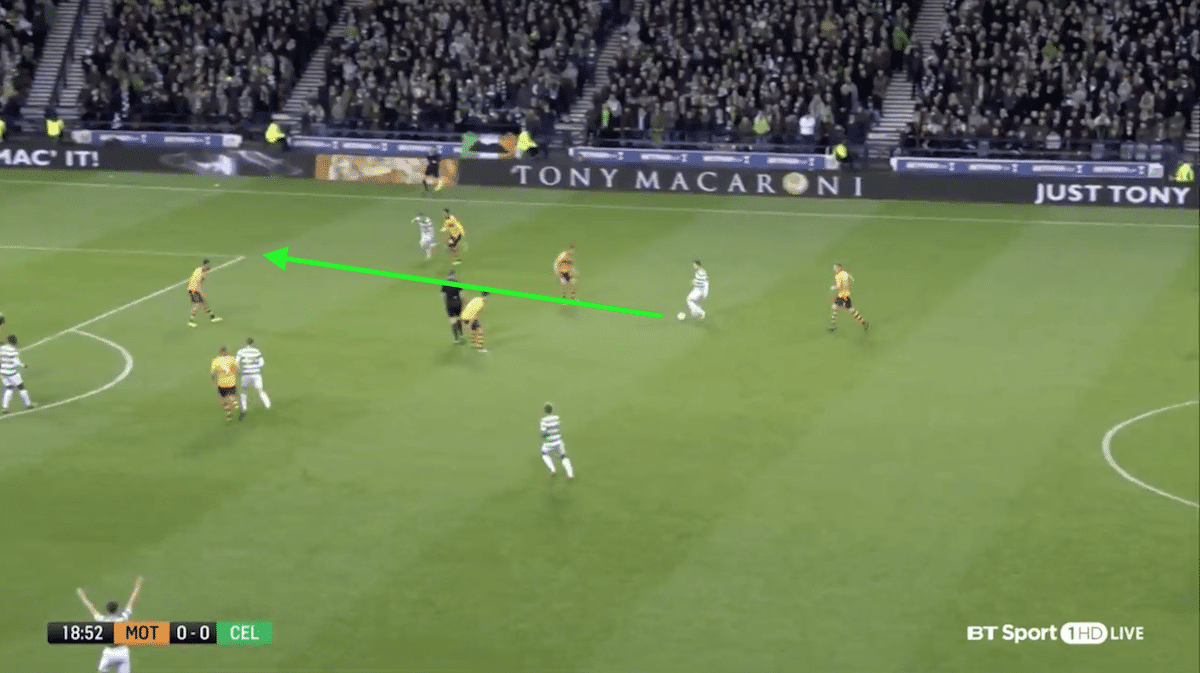 The Scottish ‘Joshua Kimmich' can also act as a playmaker. He plays a one-two down the Celtic right and the picture above makes it look like a fairly simple pass. But it's only like this because of of McGregor's awareness.

He positions himself on the half-turn to receive the pass and this allows him to pivot on the ball while controlling it. He's then able to play it quicker than most.

It's why it appears as though no Motherwell men have reacted quick enough. Because not many play the game as quickly as Celtic midfielder does. 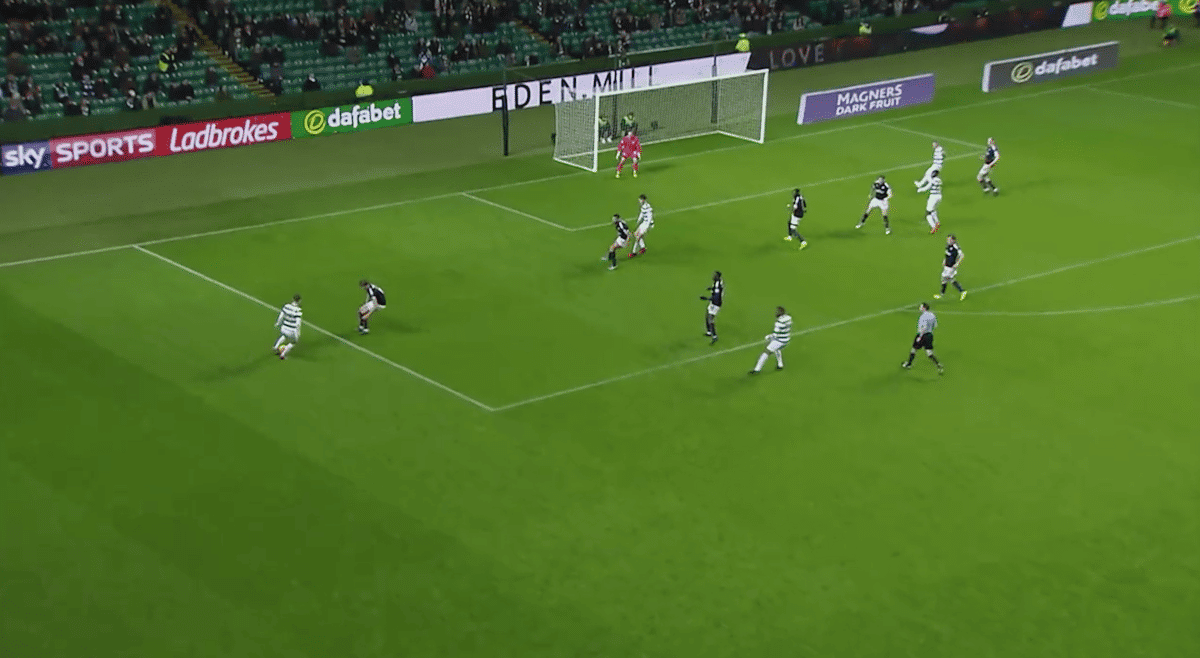 The fact he's ambidextrous adds another layer to his game. McGregor the left-back is being fronted up in the picture above. In most instances the Dundee player would be doing the right thing by showing the left sided player inside onto their weaker foot. 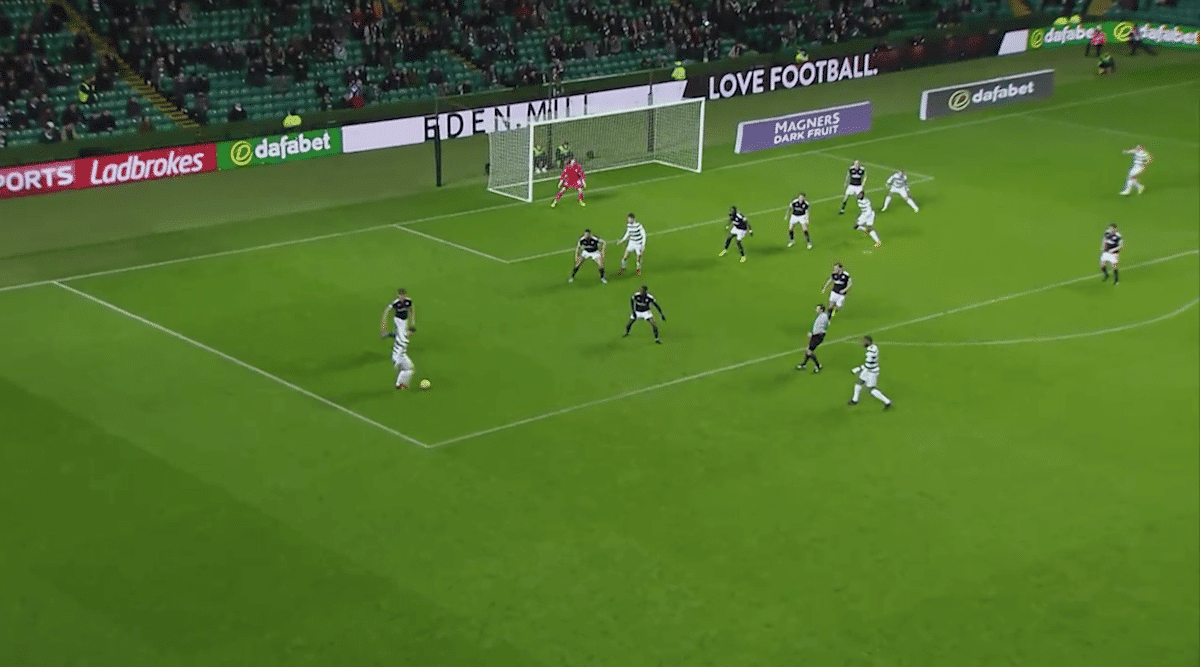 But McGregor doesn't really have a weaker foot. He cuts back onto his right and delivers a ball most players using their dominant foot would be impressed with. It finds a team-mate in the area but can't be controlled and a good opportunity goes begging.

This situation in particular highlights the damage he can do in the opposition's penalty area but he's capable of doing this all over the pitch.

McGregor is the real deal. An intelligent player who can use both feet and isn't flustered no matter what the scenario is. He might not make the starting XI every single week but he's by far one of Rodgers' most important players.