Over the last few years, Aberdeen have emerged as Celtic’s main domestic threat. With Rangers demoted to the lower tiers of Scottish football and needing time to work themselves back into the top division, Derek McInnes’ men have secured their status as the country’s second-best side.

Celtic won everything on offer on the home front last season, sealing a magnificent treble after a campaign undefeated. They pipped Aberdeen to second place in each of the three domestic competitions in the process.

McInnes’ side haven’t been put off, however. Despite the woes of 2016/17, a summer that saw several key players move on, the hefty spending of Rangers and the continuation of Celtic’s unbeaten run in Scotland, the Dons remain in a sound second place in the Scottish Premiership.

And, on Wednesday night, they will be looking to take that big next step, as they welcome Brendan Rodgers and his players to Pittodrie for what is arguably the most meaningful league game in recent memory.

Celtic will have to be on top form to guarantee a win and three crucial points to stay top of the Scottish Premiership. Here we analyse the strengths and weaknesses in Aberdeen’s game, and how they can be countered.

Aberdeen are not the most complex team when in possession. They often look to go long, playing direct balls out from the back towards a target man up front. In Adam Rooney and Stevie May, they have two strikers of good physical strength and aerial ability who can win flick-ons or hold the ball up.

As a result, applying pressure high up the pitch is unlikely to alter the way McInnes’ side build attacks. Their central defenders may be hurried into playing direct balls quicker, but their passing style will essentially remain the same.

Aberdeen are highly unlikely to change this aspect of their play against Celtic; if anything they will be more aware than ever of the need to get the ball forward from the back quickly to bypass the pressing of their rivals.

With this in mind, Rodgers should perhaps consider allowing the Dons’ centre-backs to have possession. Taking a leaf out of Mauricio Pochettino’s tactical notebook – the Tottenham Hotspur instructed his strikers to sit deep centrally and not pressure Liverpool’s centre-backs last weekend – he could instead focus on maintaining a compact defensive shape and cutting off forward passes.

FOCUS ON THE SECOND BALLS

Aberdeen’s direct style of play may not be particularly easy on the eye. It also isn’t the most progressive form of possession seen in football today. However, it is effective. This is because they have good organisation when it comes to winning the second ball. 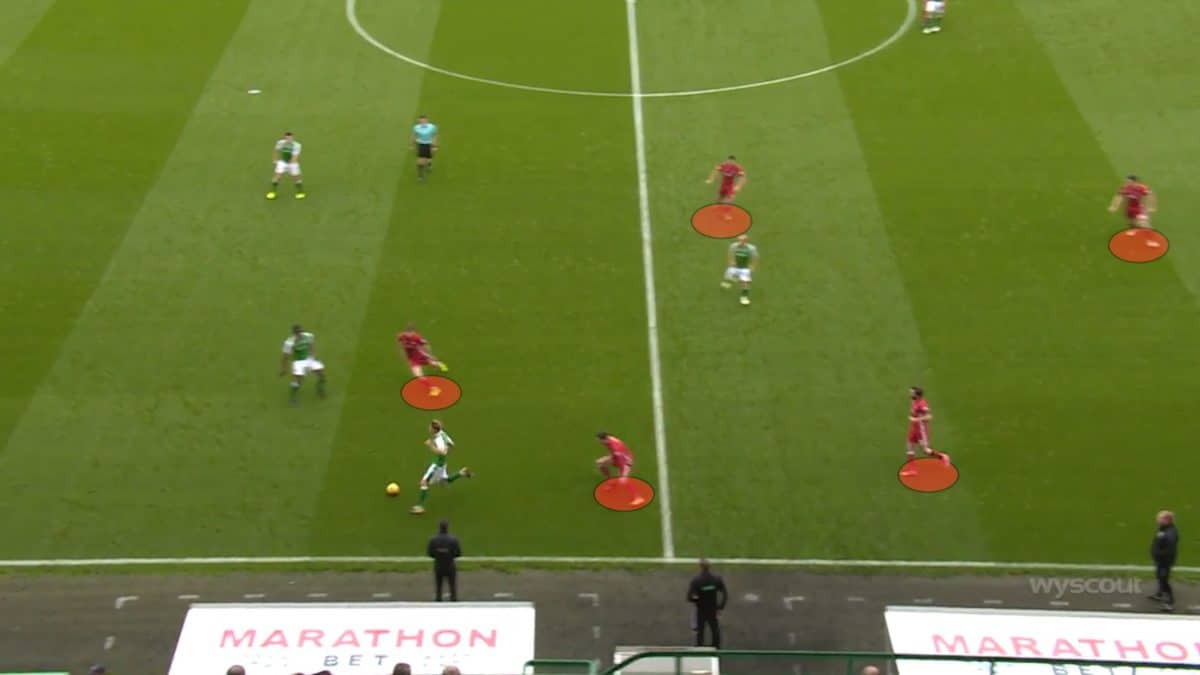 The above image offers an example of how aware McInnes’ side are of the importance of winning the ball after a long pass. Whether or not their target man wins the aerial duel, they always get men around the ball to ensure they can compete for the knockdown, whoever it may fall to. From there, they look to orchestrate quick attacks or counters into the space behind.

In order to avoid this sort of situation, Celtic must understand that their principal aim must be to win the second balls. Pressing the Aberdeen defence won’t stop them from going long, and challenging in the air won’t always stop the ball from going loose. But, once it does, Rodgers’ side must be alert to it.

Aberdeen may prefer to go direct with their possession, but they do have one excellent string-puller in McLean.

Celtic must not allow him to find his rhythm if they are to enhance their chances of picking up a big win at Pittodrie.

The 25-year-old has a refined left foot, good close control and excellent vision. These traits make him capable of accurate switches of play and precise balls through opposition lines of pressure.

At his best when in the centre, Rodgers should ensure his side are vertically compact, deny space between the lines, and force the former St Mirren man wide.

It was announced today that McLean will be leaving Aberdeen upon completion of his current contract next summer.

McInnes said: “Unfortunately, Kenny McLean has indicated he's going to leave at the end of the season. I am totally fine with that. Disappointed, but grateful that Kenny and his agent have been honest enough to say that's the intention.”

But McLean isn't gone yet, and removing him from the centre, or at least reducing his space and time on the ball and therefore discouraging passes to him, would severely limit Aberdeen’s creativity.

Aberdeen may well opt for the rough 4-2-3-1 system they started the campaign with. This is also similar to the shape they used the last time they met Celtic, in last season’s Scottish Cup final. While they lost on the day, they caused problems for the champions with their intensive man-marking approach, seen below. 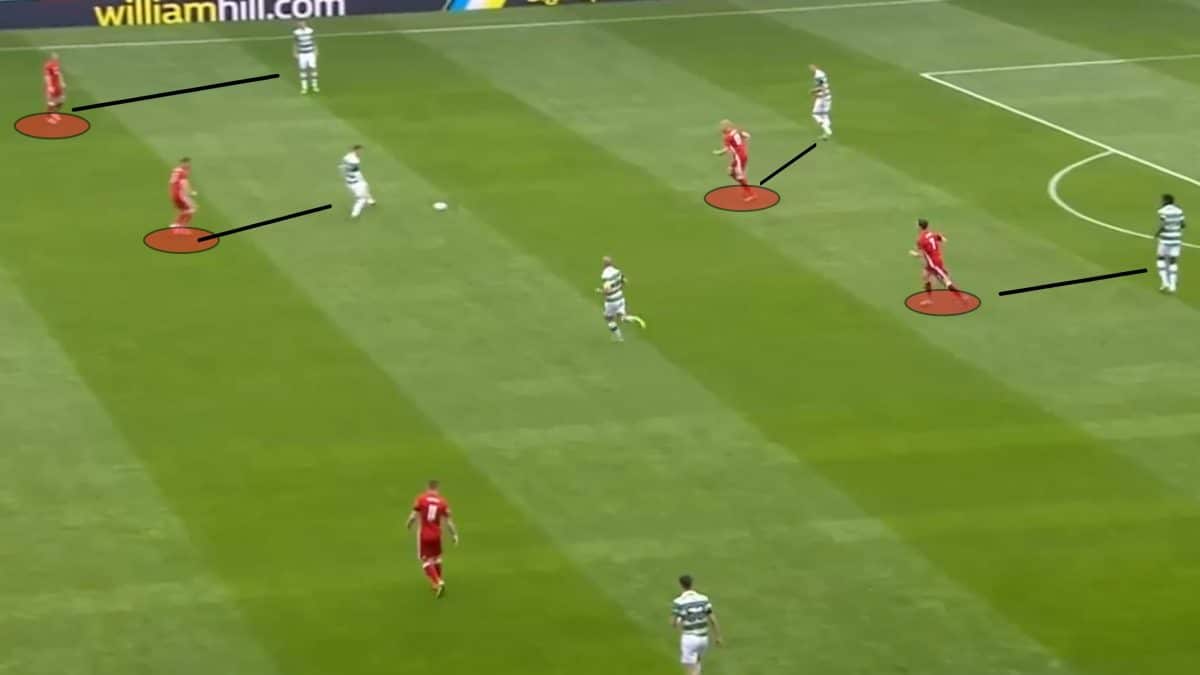 Defensively, the Dons operate a flexible man-marking scheme. While they mark man-to-man, they do allow for the passing on of individual opponents, rather than having every single player mark their direct opponent for a full 90 minutes.

While they allow the opposition ball-player to play out from the back, Aberdeen’s old school defensive coverage ensures the receiver is almost always intensely marked. This pressure can pay dividends, speeding up the opposition’s possession and forcing turnovers.

However, Celtic can shake off this defensive approach by deploying plenty of positional rotations. This could involve the full-backs driving inside rather than outside, the wingers staying wide and then drifting infield, and the central midfielders pushing on to get between the lines.

With these movements, Rodgers’ side can disrupt Aberdeen’s defensive shape and create space in attacking areas to be utilised.