There’s one name in the Belgium team at this World Cup that doesn’t quite fit with the others. Roberto Martínez has one of the most talented squads at summer’s tournament, with countless world class stars to choose from. This is the country’s so-called golden generation, after all. But in Dedryck Boyata, there’s an odd one out.

The 27-year-old has started both of Belgium’s opening two games at this World Cup so far, playing alongside Toby Alderweireld and Jan Vertonghen in a back three.

The injury suffered by Vincent Kompany in the lead up to the tournament thrust Boyata into the lineup and with the Manchester City captain still recovering it’s likely he will remain in the team for the next couple games at least.

Going on the basis of recent reports, this has raised the stock of Boyata, so much so he has been subject of Lazio transfer rumours. Bhoys boss Brendan Rodgers is reportedly desperate to keep the former Bolton Wanderers and Manchester City defender. This gives a false impression of the player Boyata truly is, though.

By and large, Boyata is considered something of a liability at Celtic. If Rodgers has failed in one aspect of his time in Glasgow so far, it is in establishing a solid backline.

This is rarely exposed in the Scottish Premiership, where Celtic are so dominant their flaws in defence are largely masked, but it has become apparent in European competition.

On top of this, Boyata is entering the final year of his contract with the Hoops. In 12 months’ time, the Belgian will be free to walk away from Celtic, with the club getting nothing for the player. Lazio have presented the Hoops with an opportunity to claim value from a player many consider not good enough in the first place.

This isn’t to say Boyata has been a complete failure at Celtic. He has been a key figure for Rodgers over the past two seasons, winning back-to-back trebles with the Glasgow club. He has also played in the Champions League and the Europa League knockout stages. Add the World Cup into this and Boyata has pedigree, at least on the basis of his C.V.

Indeed, the 27-year-old’s stock will never be higher than it is now. Having faced only Tunisia and Panama so far, sides of questionable calibre, Boyata has yet to be challenged and alongside defensive talents such as Alderweireld and Vertonghen doesn’t look altogether out of place. This is the only explanation for the hefty £7million price tag now being placed around his head. 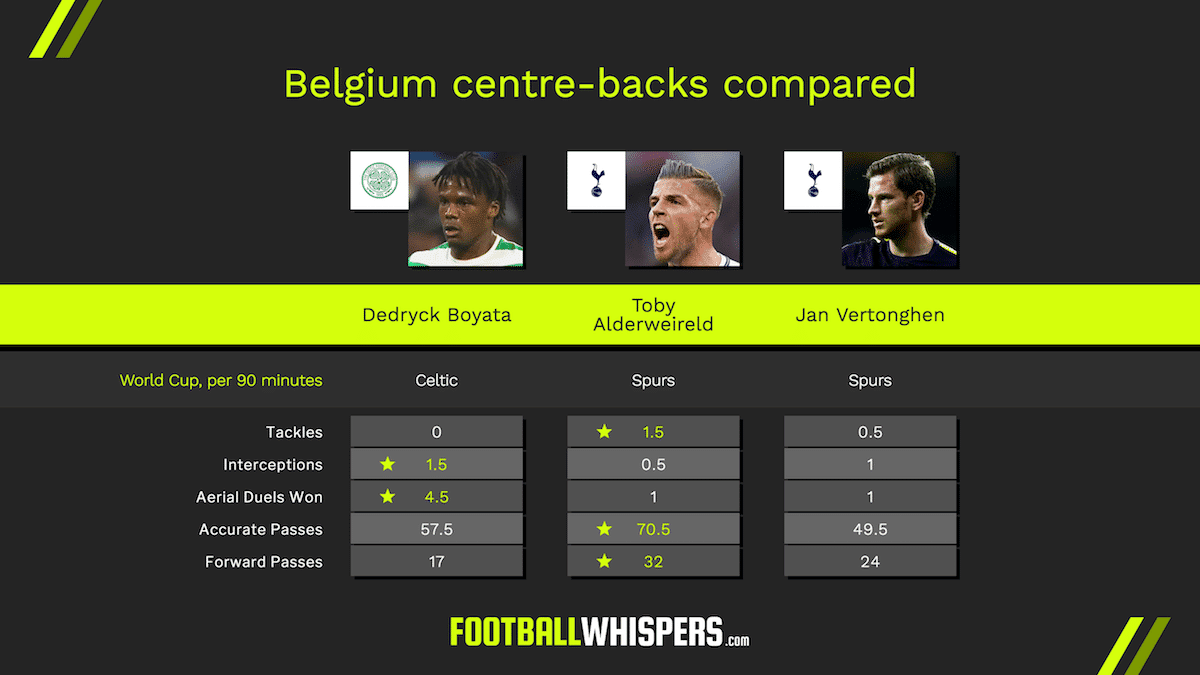 Looking at Belgium’s statistics at this World Cup so far, it’s easy to make out the consistency of their defensive make up. Alderweireld is the one charged with bringing the ball out from the back, averaging 80 total passes per 90 minutes compared to Boyata’s average of 62 per 90 minutes and Vertonghen’s 55.5 per 90 minutes.

Boyata has been rather passive in his play at this World Cup to date, only averaging 1.5 interceptions per 90 minutes, with the centre back yet to make a single tackle. Of course, the point should be made that Panama and Tunisia didn’t carry the greatest goal threat, but Boyata is being used to hold position as much as anything else. In the air he is averaging 4.5 successful aerial duals per 90 minutes (Alderweireld and Vertonghen average just one per 90).

At Celtic, Boyata has proven himself many times before to be rash in his decision-making. He is also slack in possession at times, as shown by a minor mistake in the game against Tunisia last week when he very nearly gifted the ball straight to the opposition as the last man. If Lazio see him as a shrewd signing then they aren’t looking hard enough.

The argument could be made that selling Boyata, even for the £7million figure which has been mooted, would be a risk for Celtic. Erik Sviatchenko has returned to Denmark, while Marvin Compper and Jack Hendry have struggled to make much of an impression since signing for the Hoops in January.

Meanwhile, Jozo Šimunović, himself a target for Italian clubs recently, is also extremely injury prone. Selling Boyata could leave Celtic short at the back.

But if Rodgers wants to take his Celtic side to the next level then the defence must be a priority. A £7million fee for Boyata, who only has 12 months left on his contract, would give the Scottish champions some extra freedom in the transfer market to overhaul their defensive ranks.

Rodgers surely recognises this and won’t fight too hard to keep the Belgian, no matter what he achieves at the World Cup this summer.