Celtic head into their Champions League playoff match against FC Astana sweating over the fitness of Leigh Griffiths. However, not being able to call upon the Scottish striker could well be a blessing in disguise for Brendan Rodgers' men.

Not being able to call upon a prolific striker, which the 26-year-old is having netted 66 goals in 95 Scottish Premier League starts, is a negative and the sooner he's back as part of the starting XI the better for the Bhoys.

But if you were to categorise Griffiths he would come under the ‘poacher' tab. Against some teams having a player of his style is perfect. He turns what some might consider to be scraps into a three course meal.

Having watched Wednesday's opponents FC Astana against Legia Warsaw, though, it's apparent that a false-nine may be more effective for Celtic if they're to progress into the group stages.

It's a system Rodgers and Celtic have used already this term with Tom Rogic and James Forrest both trying their hand there and one of them might be getting the nod there again.

The Kazakhstan league side did well to overcome Legia Warsaw in the earlier playoff round, defeating them 3-2 over two legs. But they were far from convincing.

Not only are they questionable when defending set pieces, with the Polish side having a lot of joy with crosses into the penalty area, they also left their centre-back pairing exposed on a number of times.

Celtic have the quality in attack, even without Griffiths or Moussa Dembélé to really put their opponents to the sword. 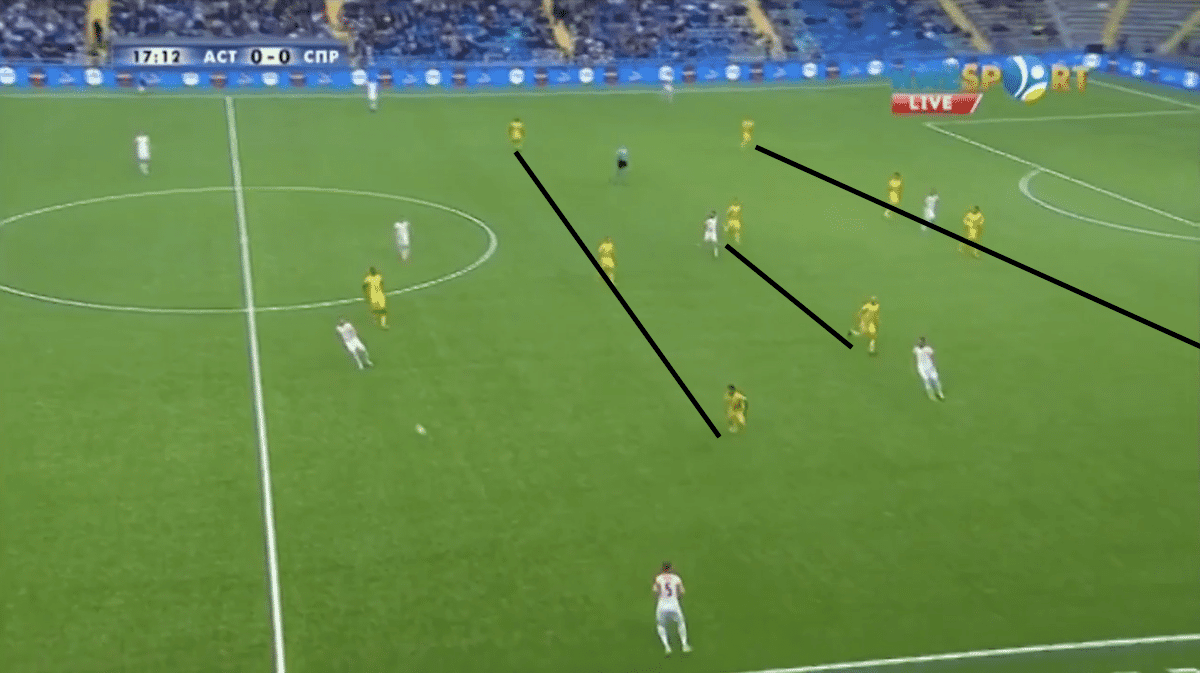 Astana tend to start with a 4-2-3-1 formation as you can see in the picture above, albeit with their left-back just off of the screen. They're compact in their shape and fairly narrow.

They do press the opposition when they come into certain areas of the pitch and they do like to spring a counter-attack whenever possible. But while most teams use their two ‘defensive' midfielders as screens for their centre-backs, Astana tend to let their two follow the ball and even track the opposition into areas they have no business being in. It's a bit of a reckless trait and it leaves them exposed. 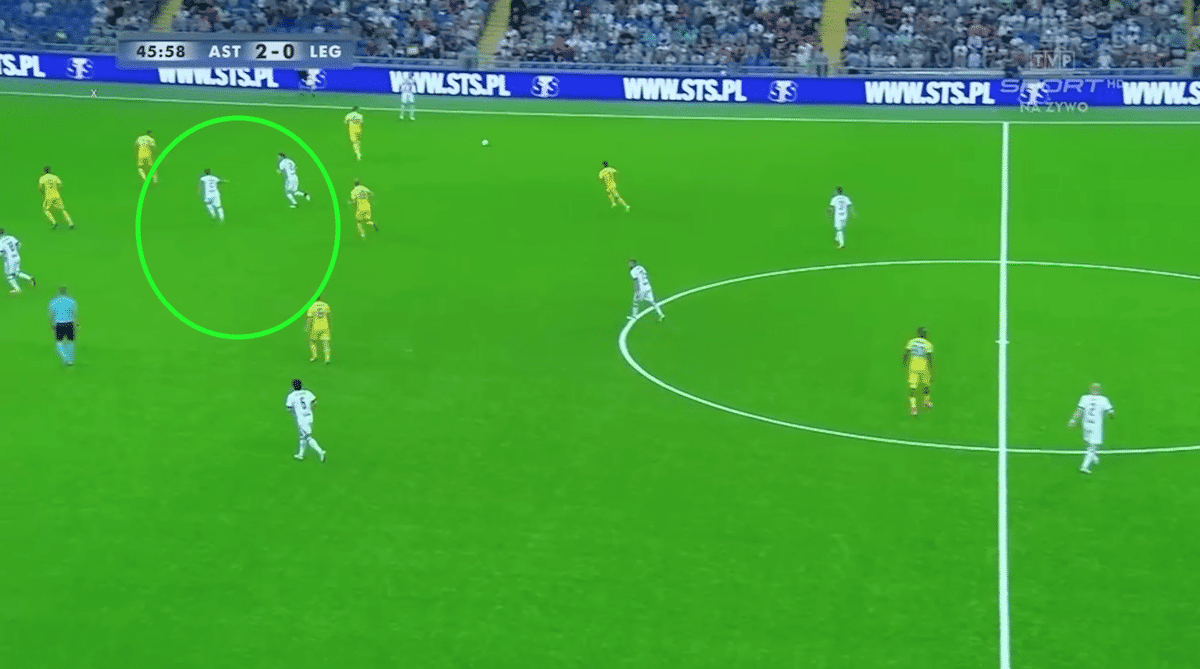 In the picture above you see Legia work the ball out wide. They won back possession in the centre of the pitch and exchanged passes before the man just to the left of the halfway line plays the ball wide right.

Despite such a slow transition, the away side still have two men behind the midfield line, highlighted by the green circle. The left sided centre-midfielder makes his way over to that area of the pitch and his partner scoots over to cover. 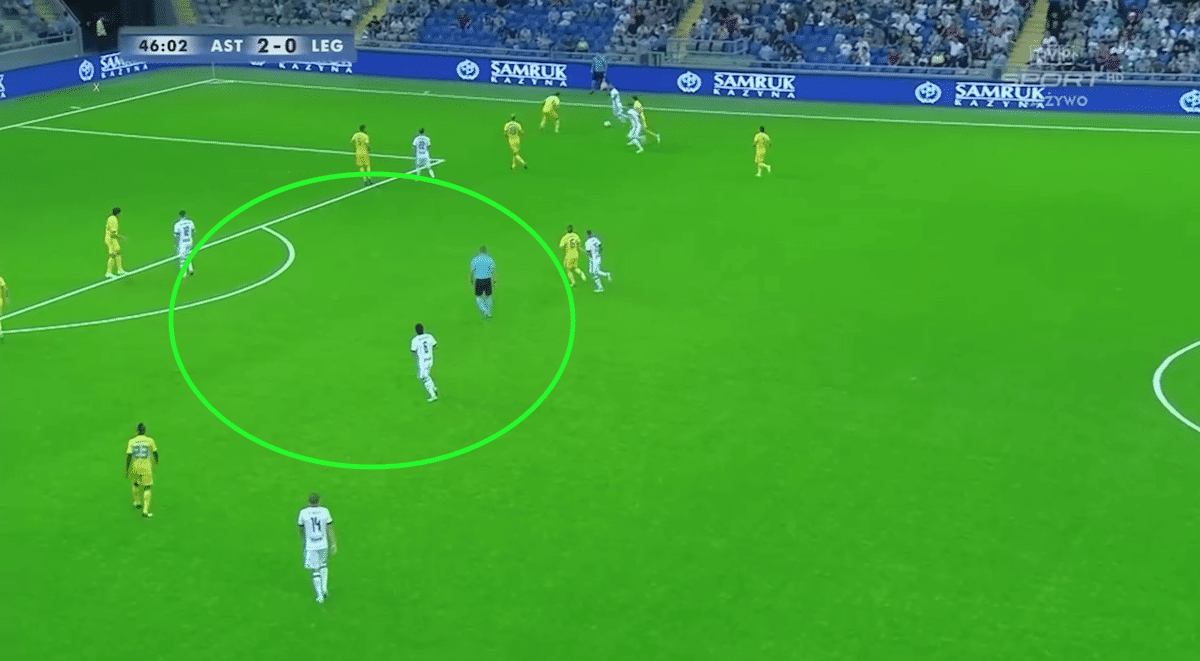 This, however, leaves even more space in the central area. The right sided centre-midfielder, ball watching, is oblivious to the fact two Legia players are making their way into the space ahead of his centre-backs.

What should be a fairly easy situation to defend results in an opportunity for the opposition. 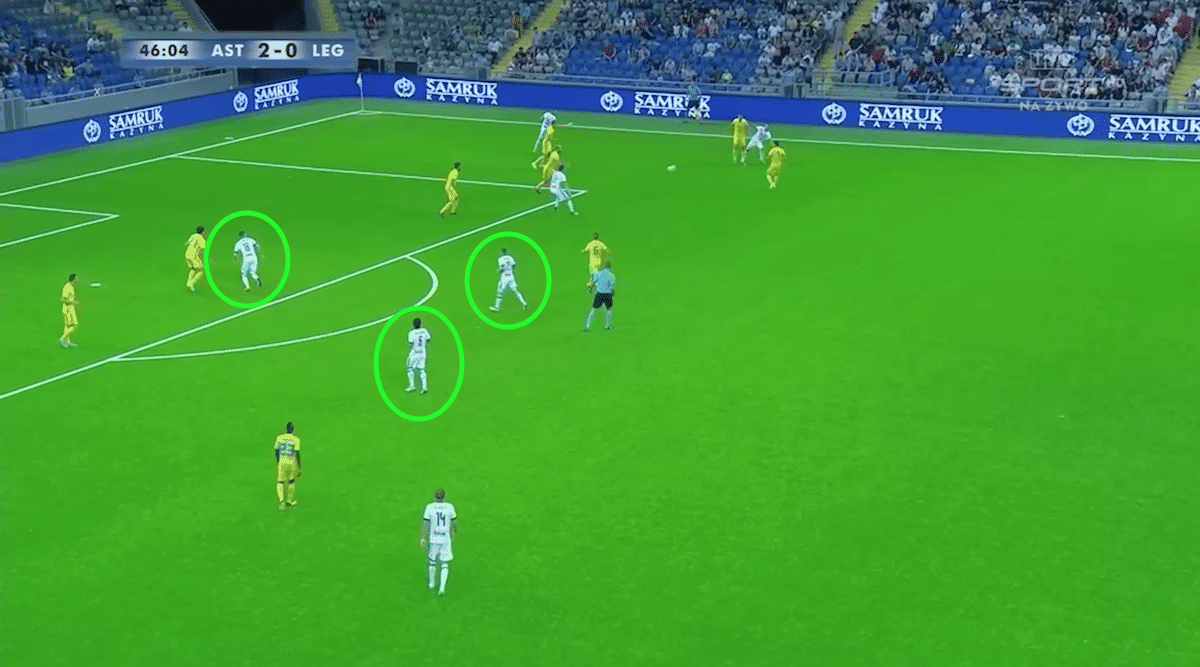 As the ball is played in from the Legia right they have three players in the space between the Astana defence and their midfield. The away side fail to make the most of this opportunity as the ball finds it's way to the Legia No.8 who brings it under his spell, advances into the area but then fires over under pressure.

A more composed player in that position would punish Astana. But what's worrying for them is how easy it was for Legia to get into such a position.

This isn't a one off, either. The spacing in the Astana is shocking when you consider how organised and compact they look at first glance. 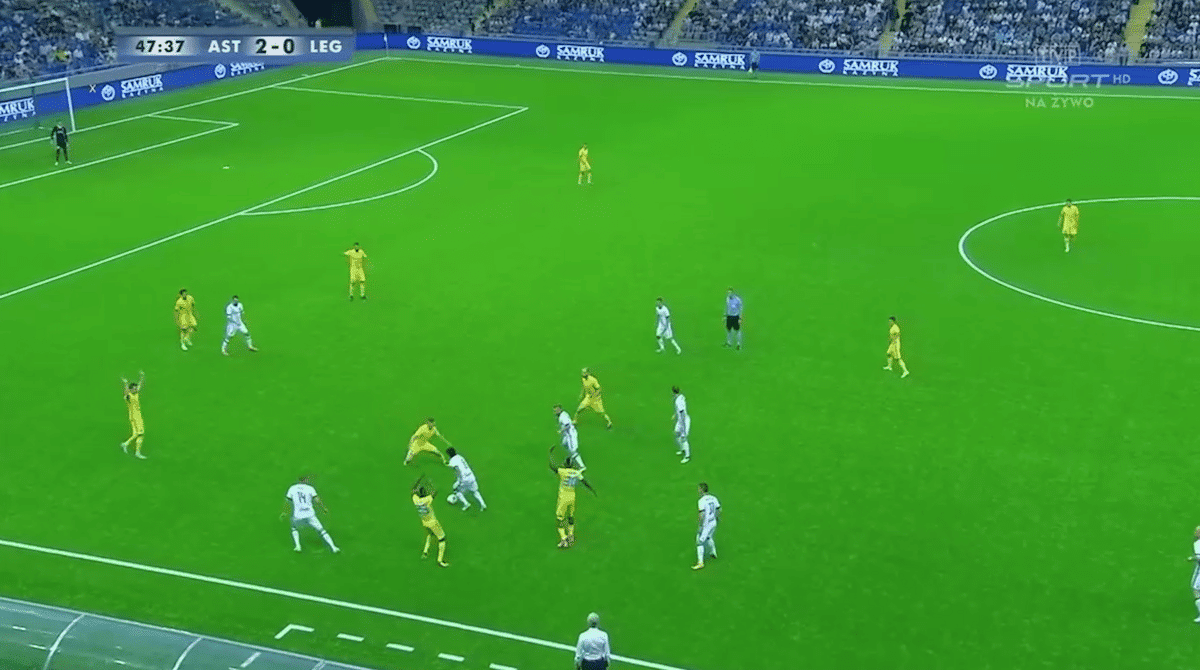 Legia win a throw in on their left side of the pitch and Astana look to win the ball back. Positionally they seem fine apart from the fact their left-back needs to tuck inside so he's closer to his left centre-back.

It's planning for the worst but shouldn't you do that as a team? 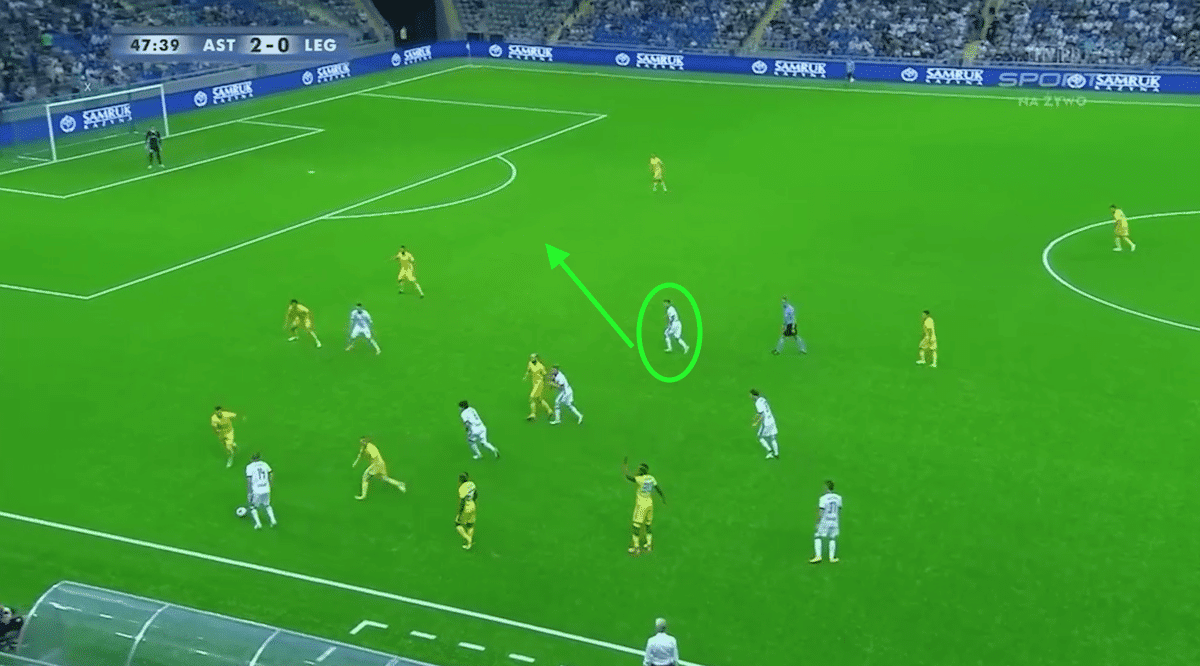 Legia somehow manage to evade tackles and carve out space in what was initially a compact area of the pitch. As soon as the ball is played to the man on the left people from midfield break. Astana, however, are slow to react to this.

Again you see the two Astana midfielders oblivious to what is behind them. 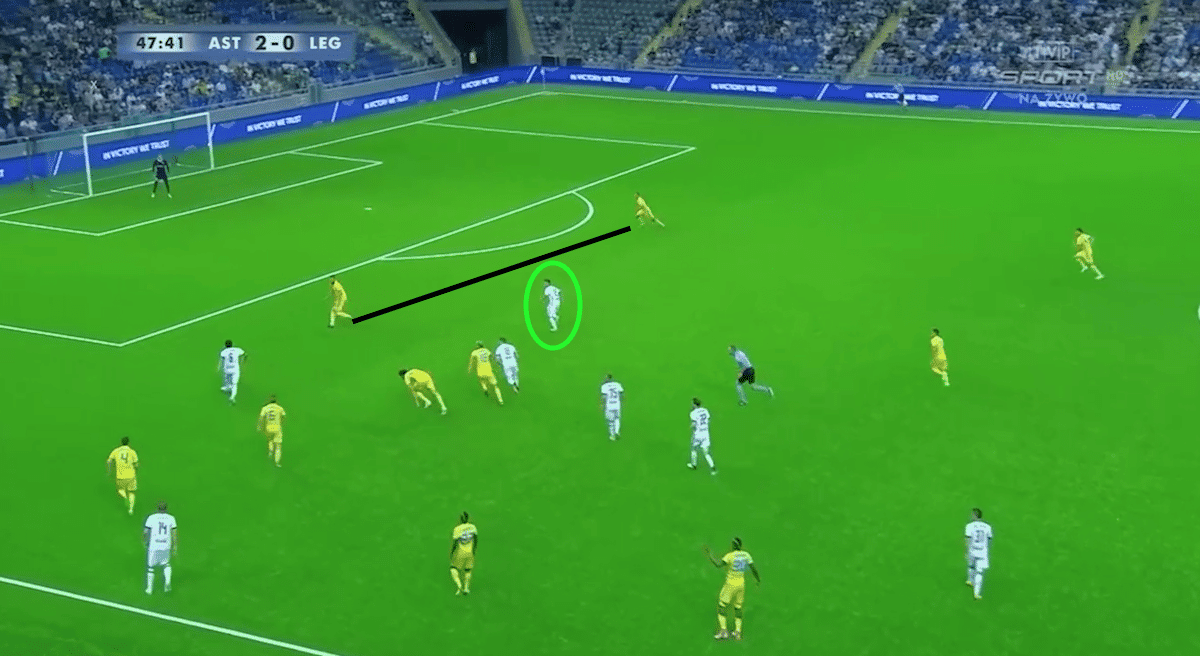 As expected the man circled in green drives into the space between left-back and left centre-back. It's all very reactionary from the home side and they're lucky not to concede. Legia dawdle on the ball and pick the wrong pass but it takes a superb stop from the ‘keeper to keep them out.

But that's two instances which show you don't need to play superb football to cut them open. You just need intelligent players to position themselves between the defensive and the midfield line. That's what causes the chaos and that's what will result in Celtic having a lot of joy.

In the shape of Forrest, Rogic, Scott Sinclair and Jonny Hayes, Brendan Rodgers has players at his disposal who are more than intelligent enough to pick up those pockets and punish the Kazakhstan side.