Celtic secured their eighth consecutive league title thanks to a 3-0 win over Aberdeen in early May.

In the process, they achieved something that has only been done twice before in the history of Scottish football. The next stop is emulating their iconic predecessors of the 1960s and ‘70s – as well as 1990s Rangers – by winning nine in a row.

Their current streak of Scottish Premiership successes has been anything but a straight path, however. It has involved three different managers and a whole host of players in each position.

Here, we analyse and select the best Celtic XI from the eight-in-a-row run, stretching from the 2011-12 season to the present.

Before picking the players it’s worth considering how they might line up. In order to do this, we have to decide upon a manager. Of the three contenders for this role, Rodgers is the leading candidate.

His invincible first season saw Celtic enjoy one of the finest league campaigns in their history, as they dropped just eight points.

And, while he never achieved much in Europe and left mid-season for Leicester City, his domestic record of two straight trebles was outstanding.

Signed permanently from Newcastle United after two years on loan, Forster went on to be a key presence at the heart of defence during Neil Lennon’s first spell in charge of the club. He was commanding, error-free and a superb shot-stopper who pulled off some of his best saves on the biggest of occasions.

The Englishman’s ability to save penalties and his heroics in the 2-1 win over Barcelona in 2012, which led to Spanish media nicknaming him ‘The Wall’, only added to his legend and led to caps for his country, encouraging Southampton to pay around £10million to sign him in 2014.

Ajer has established himself as Celtic’s first-choice central defender over the last two years, capitalising on the injuries and inconsistency of Boyata and Jozo Šimunović.

The Norwegian shows immense composure on the ball for someone just 21 years of age, and his ability to drive forward in attack is matched by his aerial strength and vital blocks defensively. In many ways, he resembles his partner in this iconic line-up.

Van Dijk simply has to be selected for this side. He, like Ajer after him, oozed class on the ball whilst also being aerially dominant and possessing a good understanding of the game taking place around him. His calmness, authority and playmaking quality were integral to the title wins of 2014 and 2015.

Lustig is the only non-Scottish player in this team to have played a role in every single one of Celtic’s eight consecutive title wins. The Swede took over from Matthews at right-back and made the position his own.

While his athleticism may be on the wane now, he has generally been a good attacking outlet down the right flank. In addition, his penetrative passing out from the back has been key, and he is defensively solid enough to operate within a back three when required. 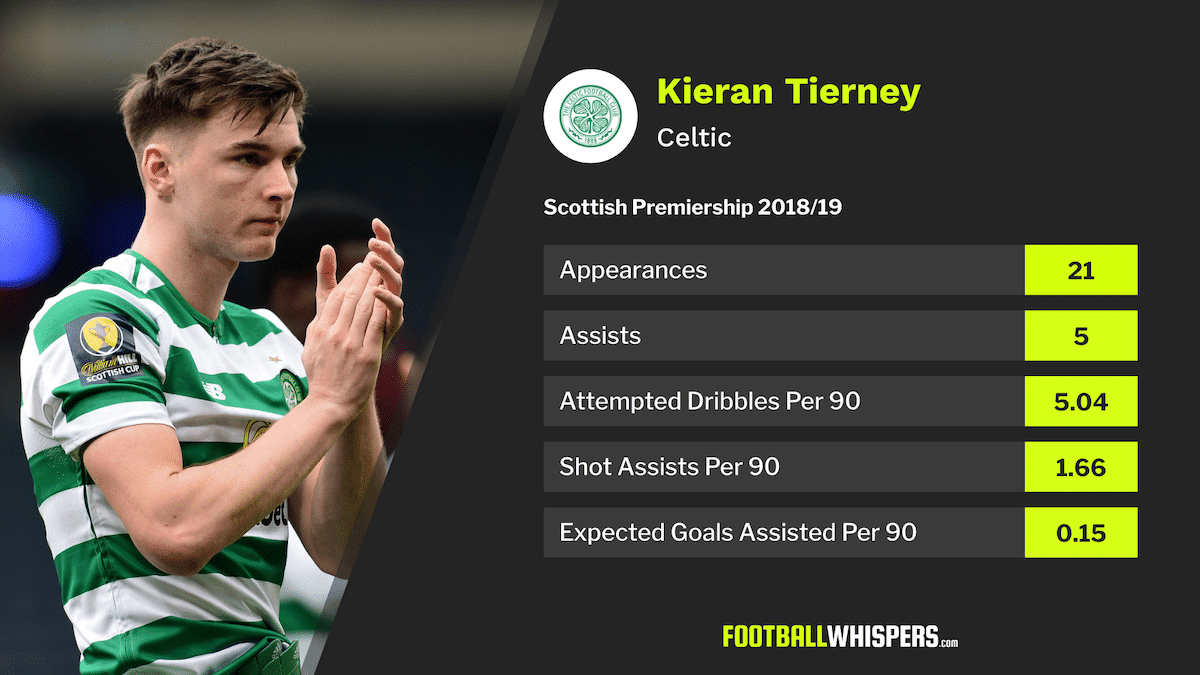 On the left, Tierney edges Izaguirre on account of his consistency. While the Honduran enjoyed a stunning debut campaign at Parkhead, injury stopped him from truly fulfilling his early potential in a Celtic shirt.

Over the last four years, Tierney has developed from a raw prospect into a dynamic modern-day full-back. His ability to get beyond his man and whip in dangerous crosses is an important asset to the team’s attacking play, which explains why some of Europe’s finest sides – including Manchester United and Borussia Dortmund – have been linked with him.

If Rodgers is to manage this hypothetical team, then the 4-3-3 is the most likely formation. Within this shape, a defensive midfielder is needed to protect the back four, and Wanyama is the most obvious choice.

Arriving as an unknown 20-year-old for a £900,000 fee from Belgian club Beerschot AC, he quickly asserted himself upon the starting line-up under Lennon.

His ability to break up attacks, win tackles and generally out-muscle opponents man-to-man made him a hero at Parkhead and meant that sometimes he was utilised effectively in the centre of defence.

Brown could have been considered for the defensive midfield role given his performances as a No.6 within Rodgers’ side in recent years, however, he could just as easily be selected as a more attack-minded midfielder.

For much of his Celtic career, the 33-year-old has been an aggressive box-to-box player, making raiding forward runs, getting stuck into challenges, preventing counter-attacks and winding up the opposition. 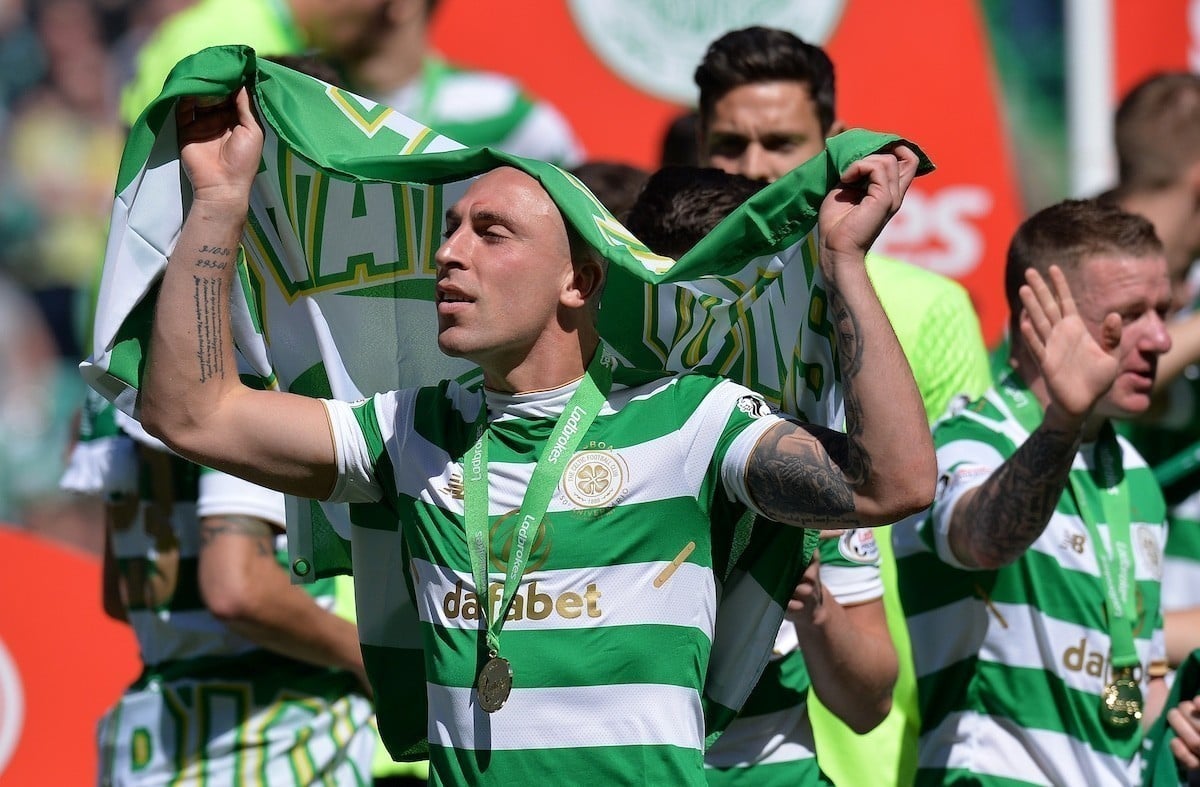 Alongside Brown, McGregor is the stand-out choice after his development in the Rodgers era. Like his more experienced teammate, he is a versatile operator just as capable of sitting at the base of midfield as he is playing behind a striker. However, he provides more quality in possession.

The 25-year-old has grown into an influential creative force at Celtic not only for his passing, but his movement off the ball. In more advanced areas he knows how to pin two defenders at once, get between the lines and move on the blind side of the opposition. Without him, the team’s attacking play wouldn’t be anywhere near as fluent.

At his best, Commons combined the poacher’s instinct of a natural No.9 with an eye for the spectacular. His two-footedness, forward runs, positional sense and composed finishing enabled him to score consistently from an attacking midfield role, while the occasional long-range strike only added to his goals tally.

Making up for a lack of real pace with his technique and instinct, he bagged 48 goals in 90 league games between 2012 and 2015, at times carrying the team forward single-handedly. 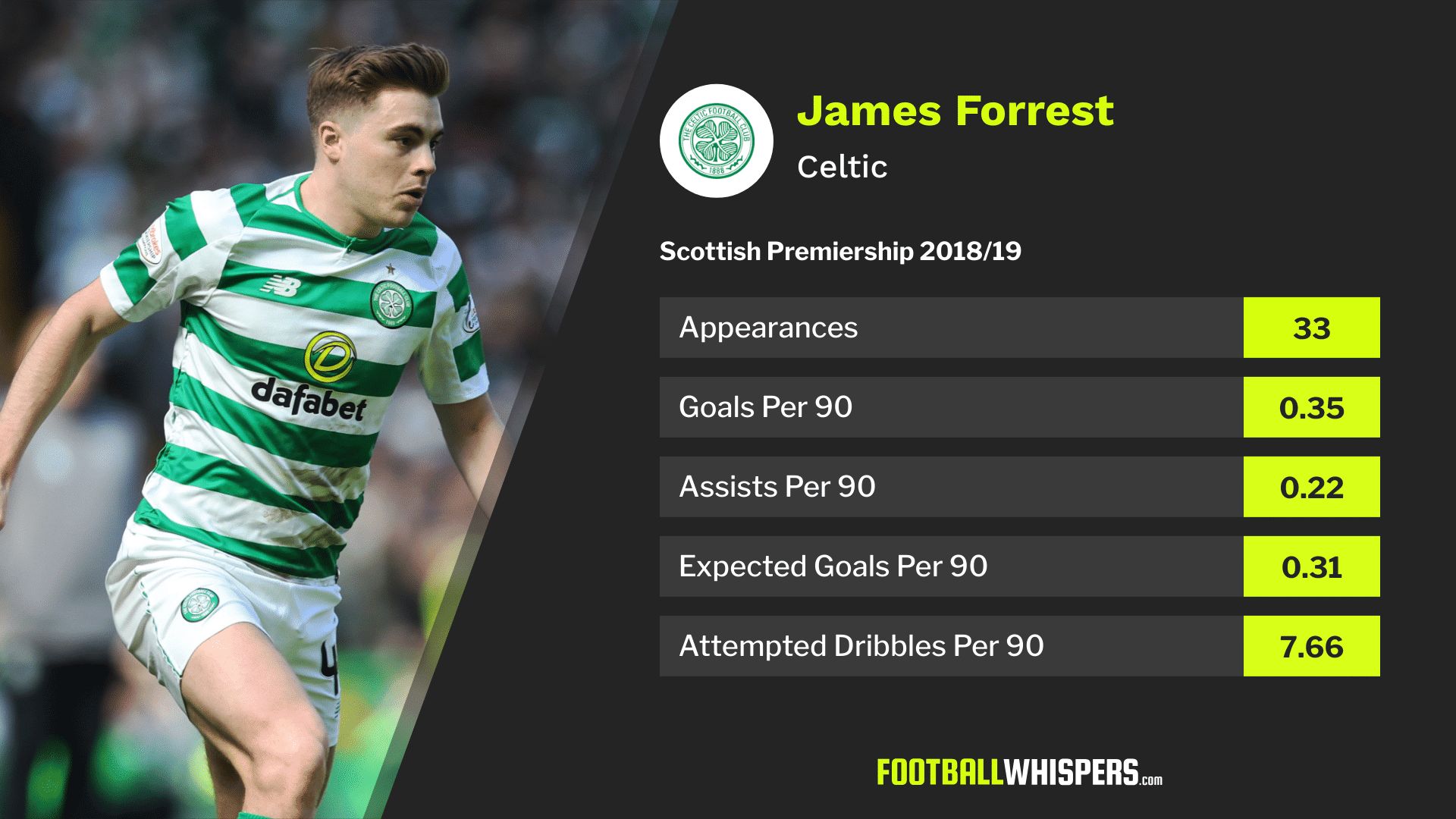 Alongside Commons, Forrest has cemented his place in this XI with some stunning displays over the last two years. Having first been given his break by Lennon, the Celtic academy graduate struggled to gain a regular spot for years before he – like McGregor – reached another level under Rodgers.

Still only 27 years of age, he has now made almost 350 appearances for the club and, along with Brown and Lustig, is one of the few players to have been present for the eight-in-a-row sequence from the very beginning to the present. His sheer pace and increasing robustness make him a serious one-on-one threat to any defender.

Competition for the striker berth in this team is intense. Yet, while Dembele is flavour of the month due to his goals since leaving for Lyon, his strike rate never matched up to that of Hooper or Griffiths. Ultimately, the latter gets the nod on account of his performances over a five-year period.

Signed from Wolverhampton Wanderers after an impressive loan spell with Hibernian, the Scotsman settled instantly. During his first 18 months at Parkhead his ratio was roughly one every two games, but in his second full campaign, he found the net an astonishing 31 times in 34 Scottish Premiership outings.

Inexplicably overlooked by his country, perhaps on account of his lack of physicality, Griffiths provided pace, quick reactions and clinical finishing for Celtic. While Lennon, Deila and Rodgers came and went in the managerial hot-seat, he kept on scoring. 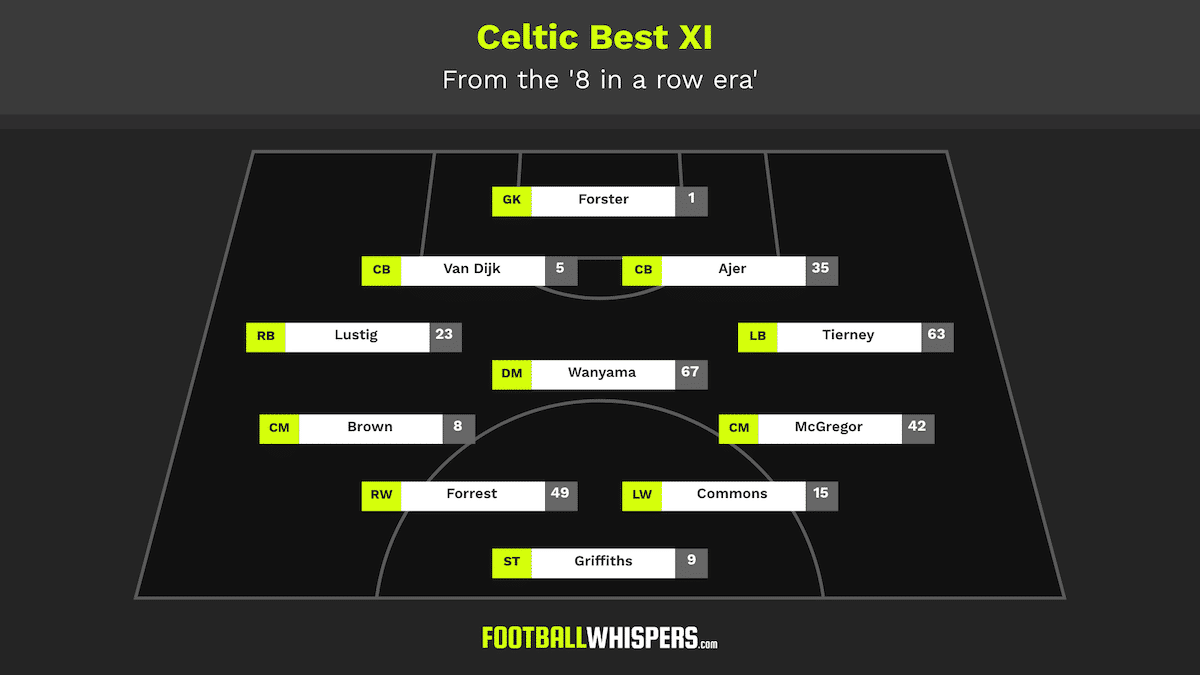