It’s been a difficult second album for Brendan Rodgers. The Celtic boss has failed to replicate last season’s almost flawless success in the Scottish Premiership and the Hoops have already crashed out of Europe.

Yet there's every chance they finish the 2017/18 season with another treble. Celtic have won the Scottish League Cup, are in the semi-finals of the Scottish Cup and are six points clear at the top of the league with a game in hand over second place Rangers.

But Rodgers and his team are victims of their own success. The 2016/17 campaign saw them finish the season undefeated. They swept aside all in their path and put on a show in virtually every game. It’s been different this time around; they aren’t as dominant and they’re not as ruthless.

They’ve won 67 per cent of their matches in the league, down from the 89 per cent from last season. Furthermore, they trail Rangers in the goals for column and are averaging two per game, a drop off of 0.7 from last season’s average. It might not seem like much on a per game basis but over the entirety of a season that’s a 26-goal difference.

Rodgers’ teams are built around productive forward lines. While the likes of Leigh Griffiths, Moussa Dembélé, Odsonne Édouard and Scott Sinclair have impressed in their own right this term, none of the quartet have shone consistently.

Dembélé's injury at the start of the campaign no doubt played a part in this, but the forward line has failed to replicate last season’s rhythm despite his return.

With this in mind, we've decided to take a look at the stats behind the forwards at Parkhead in an attempt to judge who has been Rodgers' most productive attacker this season. 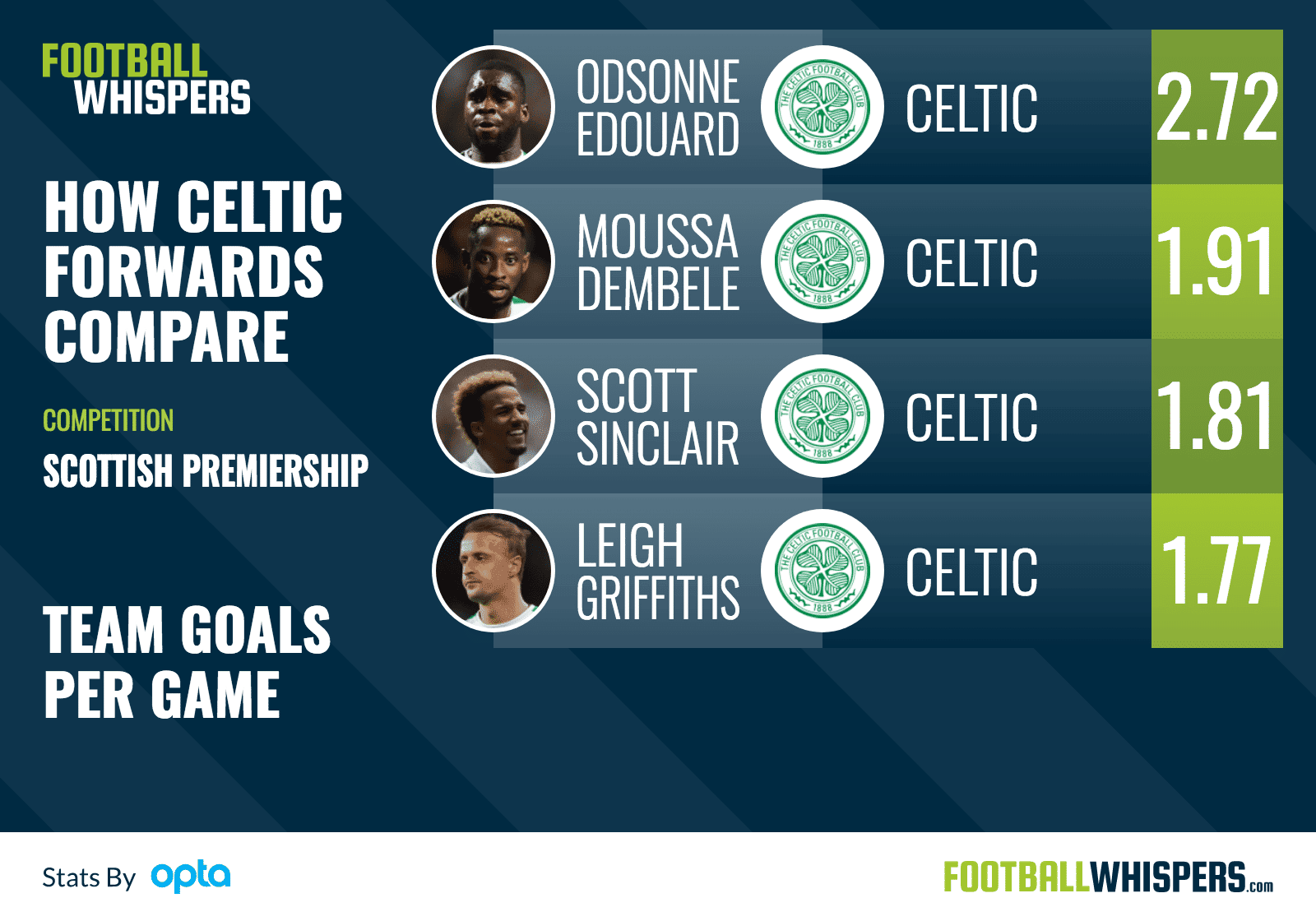 First off we looked at the amount of goals Celtic score when certain attackers start in the Scottish Premiership – although minutes played need to be taken into account for context.

Of the quartet, it's Sinclair with the most minutes (1934) under his belt this season. He's started 19 of Celtic's 28 league matches and the Bhoys have averaged 1.81 goals in these games, putting him third on this list.

Celtic net the most goals (2.72) when Édouard starts but he's been named in Rodgers' first-choice XI on just nine occasions this term. Dembélé is next up on the list (1.91) but he's featured just ten times from the off.

Griffiths has started the same number of matches as Dembélé but the Hoops only average 1.77 goals when the 27-year-old is named in the starting XI.

Édouard, who is on loan from PSG, isn't an easy forward to work out. He doesn't appear in the top 20 Scottish Premiership players for assists or dribbles per 90 minutes, but does play the second highest number of key passes (0.33) of those in this list behind only Sinclair.

It suggests he may not have yet adjusted to the physical rigours of Scottish football, but has the quality required when in possession. 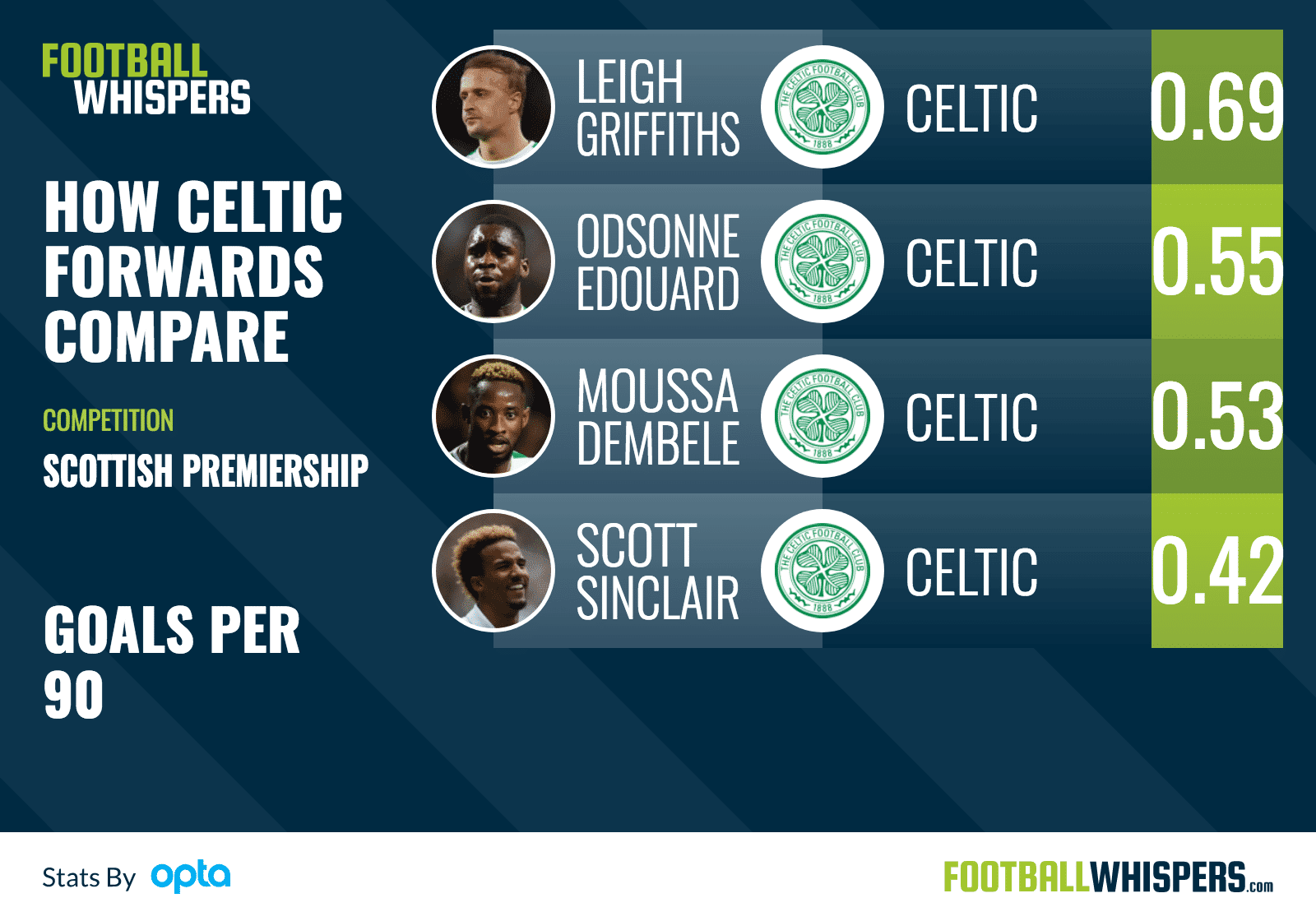 The first stat looked at their impact on the team, this one looks at forwards as individuals.

Griffiths tops the charts when looking at goals per 90 minutes, managing 0.69. The former Wolves striker is comfortably clear in first place, 0.14 above the once again impressive Édouard.

Dembélé is just behind his compatriot on 0.53 with Sinclair, primarily a winger, managing to keep pace with the attacking trio on 0.42.

However, they aren't just in the team to put the ball in the back of the net, at least not in a side managed by Rodgers. It's about the synergy going forward and the impact they have on on the Celtic XI.

Dembélé's assists per 90 score is 0.45, which means he's been involved in a goal every game this season in one way or another. He's also completing 2.85 dribbles per 90 minutes which proves he's disrupting the opposition defence on a regular basis. The Frenchman is the most well-rounded attacker the club have at their disposal.

Sinclair tops the charts for completed dribbles per 90 minutes, with 2.98, but his assists numbers are down at 0.19. It leaves his overall goals and assists numbers per 90 at 0.61. Combined with his average of 0.42 key passes, it means that, along with Dembélé, he's a complete player for Rodgers.

Griffiths doesn't rank in the assist category, which may be through no fault of his own, but he does complete just 0.06 fewer dribbles per 90 than Sinclair.

What you can see from this is that the Scotland international and Dembélé share a similar profile. 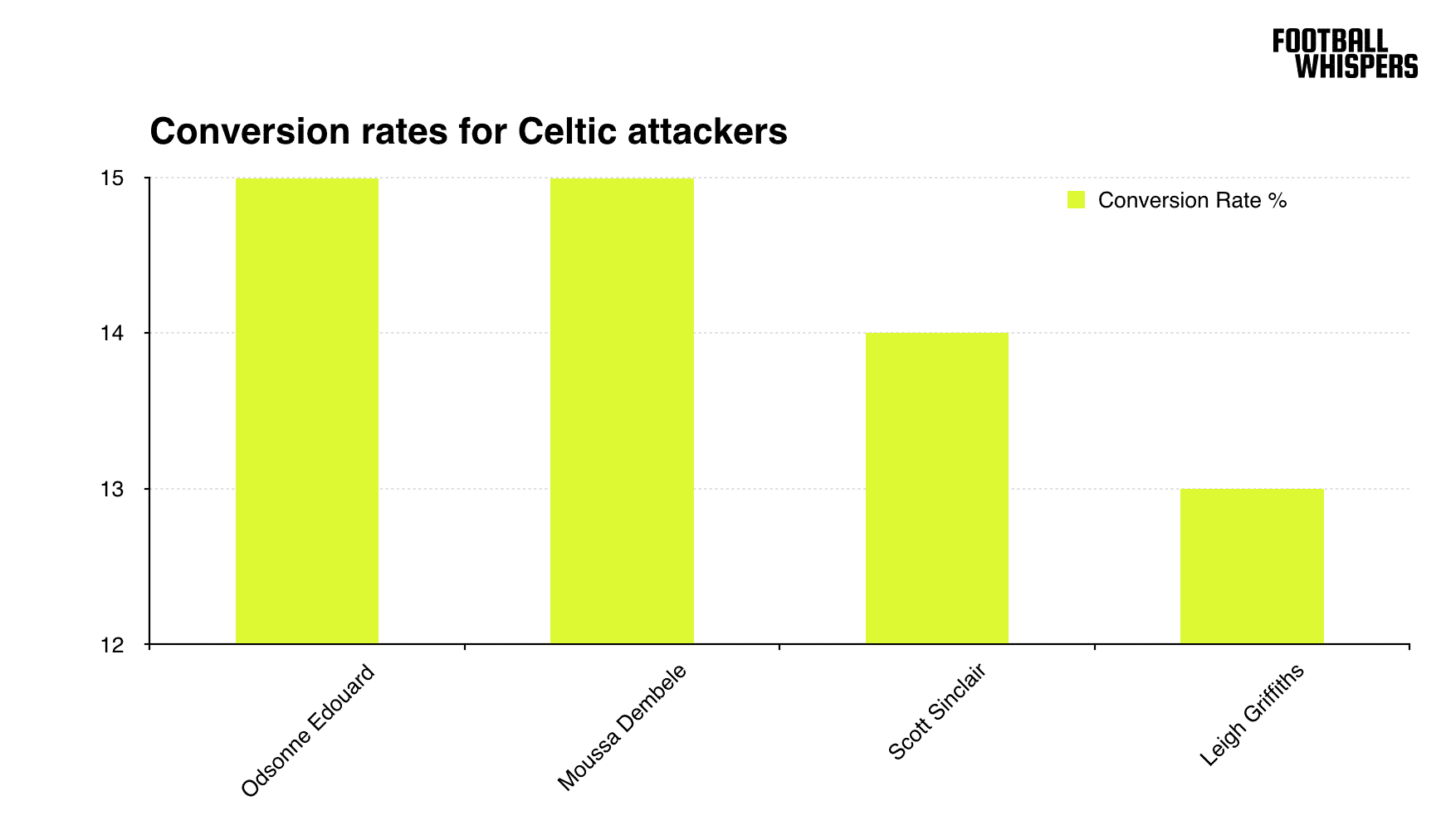 Griffiths has the worst conversion rate of the four, but he takes the most shots per 90 (5.06). He also has the best goals per 90 ratio meaning he's a volume player – it works out that Griffiths is taking close to eight shots for every goal he's scoring.

That's two more than both Dembélé and Édouard require. If the French duo matched the shot volume of Griffiths then, at their current rate, they'd be averaging close to a goal per game.

Sinclair, as you would expect, takes the fewest number of shots, averaging just 2.93 per 90. He's needing seven shots to find the back of the net this term, which is why he is averaging a goal in every three matches.

Injuries and rotation has given each player an opportunity to shine this season, and they've all taken their chance based on the stats. But Rodgers is yet to find the magic combination to get Celtic posting numbers on par to those of last term.

With no European games to concentrate on and a healthy lead at the top of the Scottish Premiership, is now the ideal time for him to tinker?

The numbers suggest Dembélé is the standout, but one thing is certain, Celtic should look at signing Édouard on a permanent basis. The 20-year-old has an abundance of potential.