It was party time at Parkhead as Celtic sealed their seventh Scottish Premiership title in a row in a barnstorming Old Firm Derby.

Odsonne Édouard took his Old Firm tally to three from two appearances since joining Celtic on loan from Paris Saint-Germain, after having scored the winner at Ibrox last month.

Just before half-time, James Forrest weaved his way through the Rangers defence before Callum McGregor and Tomas Rogic completed the rout after the break.

Steven Gerrard has his work cut out

If he wants to be the man to restore balance to the Force of the Old Firm, the former-Liverpool captain will have a lot to do.

Celtic are now unbeaten in 11 against their Glasgow rivals. If you count their defeat on penalties in the 2015/16 Scottish FA Cup as a draw (the game finished 2-2) then that stretches to 14 and 2012.

It’s the manner of their past two defeats which might be most worrying though.

For a club that’s as defined by their Old Firm matches as they are, that’s a problem.

Rangers’ left side struggled with James Forrest all afternoon and his goal just summed up the match-up on that wing of the pitch.

Makeshift left-back Andy Halliday and left-winger James Murphy couldn’t handle him, with Forrest continually beating them in one-on-one’s and creating several chances for himself cutting inside.

His goal – his tenth of the league season – was, it’s not too much of a stretch to say, Messi-esque. Jinking past one, two, three with great close control, he then fired into the far corner.

It was symptomatic of a wider problem though…

Rangers struggle 1-on-1 defending (but can press)

The score-line makes Rangers look utterly abject, and at times they were.

However, their pressing higher up the pitch was good quite regularly, and it was the one-on-one defending closer to goal that was really the death of them.

First it was Daniel João Santos Candeias against Kieran Tierney, who cut-back to Édouard for the opener; then Russell Martin against Édouard himself for the second.

Just about everyone failed to adequately challenge Forrest for his goal, and then James Tavernier failed to apply pressure to Édouard who drove into the box and provided the cut-back to McGregor for the fourth goal.

Why not start Morelos?

Alfredo Morelos was cheered onto the pitch by the opposing Celtic fans after missing several good chances in previous Old Firm matches.

However, the 21-year-old Colombian is Rangers' top scorer in the league with 14 goals and his stats stack up well against Celtic’s Moussa Dembélé this season.

(Tweets from @OwenJamesBrown, numbers from The Rangers Report) 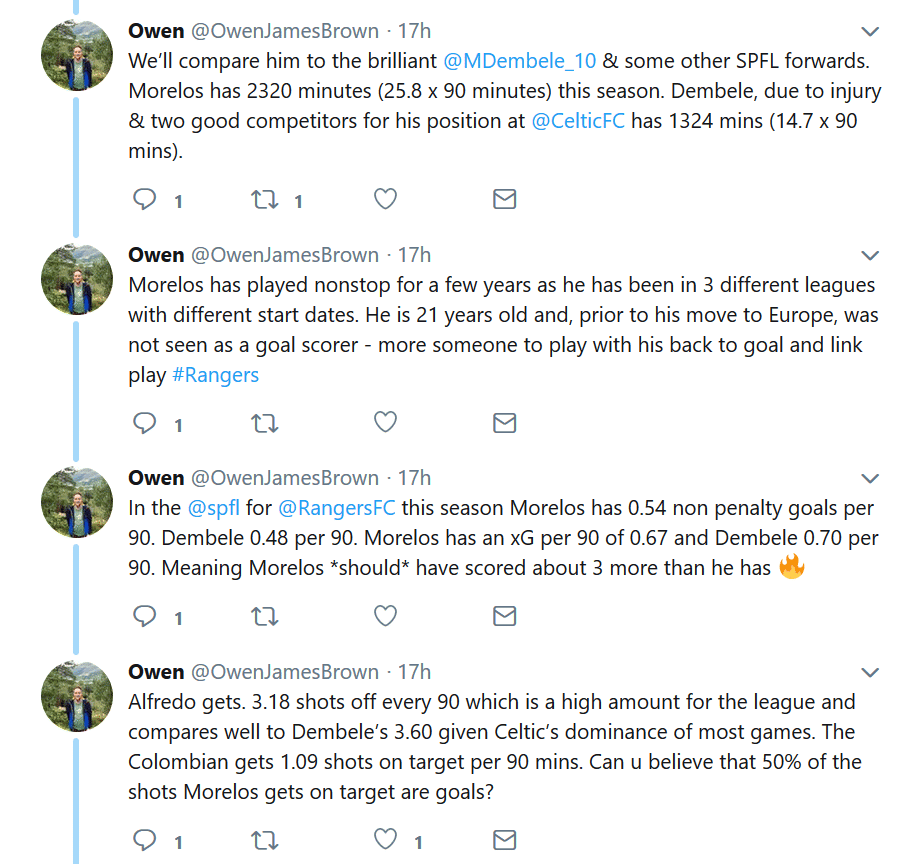 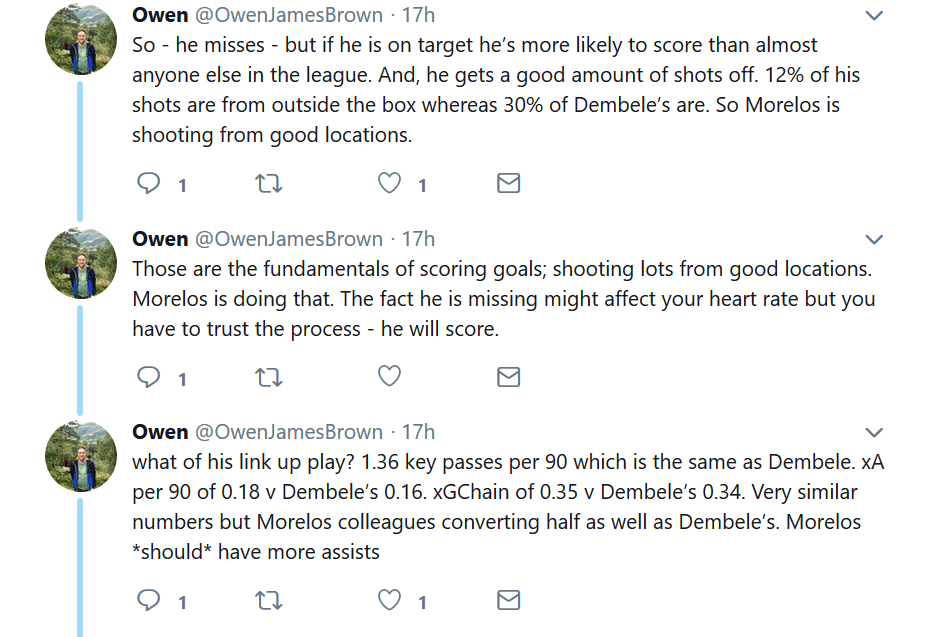 It wouldn’t have solved the defensive problems, but perhaps Rangers would have had more teeth with him on the pitch from the start.

Will Kieran Tierney leave this summer?

Young left-back Kieran Tierney put in another good performance in a big game, defensively sound and getting an assist.

He shrugged off rumours of interest from Manchester United earlier this month, saying: “I’m not thinking about anyone other than Celtic just now.

“I’m enjoying my career here; I’ve just signed a six-year deal, so if that doesn’t say long-term, I don’t know what does.”

The chance to stay with Brendan Rodgers might be a big factor, rather than move to a club managed by José Mourinho.

The Portuguese manager is famed for his lack of time fostering youngsters. The two candidates for Premier League player of the year awards – Mohamed Salah and Kevin de Bruyne – both experienced a cold time under his management, and Anthony Martial might be leaving Manchester United this summer feeling frozen out as well.