With Celtic close to being crowned domestic champions, the Scottish Cup semi-final at Hampden was Rangers’ only chance to try and be the team that stopped their biggest rivals getting a second domestic treble in a row.

From the first minute, it was clear that wasn’t going to happen though, with Brendan Rodgers’ side dominating from beginning to end.

Tom Rogic opened the scoring in the 22nd minute with a lovely finish from inside the box, before Callum McGregor doubled Celtic’s lead before half-time with a right-footed strike from a similar position.

Rangers were all over the place and boss Graeme Murty would have hoped they could put the Hoops under some pressure with a fightback after the interval.

Yet Ross McCrorie hauled down the dangerous Moussa Dembélé less than ten minutes after half-time to earn himself a red card and give Celtic a penalty. The Frenchman picked himself up, scored, and the game was killed off.

Olivier Ntcham sealed the victory from the spot after Patrick Roberts was brought down by Jason Holt with just over ten minutes left.

Celtic will be playing Motherwell in the Scottish Cup final next month.

Murty would have wanted to prove that he’s the man for the Rangers job on a full-time basis.

Before the game, there was a lot of talk about his future after chairman Dave King came out and spoke about who would get the role permanently.

King said: “On the managerial front I emphasise that the board fully recognises the need for sustained stability in this area of the club. Whoever is appointed must be able to meet the unique challenges of managing Rangers and ensuring immediate success.

“It is a priority that we commence next season with the best appointment we can make and that we move forward rapidly. Rangers is synonymous with winning and I want to repeat my commitment that neither I, nor any of the other directors, will consider our work complete until Rangers has been restored to the top of our game.”

That implied that he wasn't sure Murty was the man to take them forward. If the directors thought he was the man, surely they’d have given him the job by now after he took over in October.

And perhaps today’s showing was why they haven’t.

While Rangers caused Celtic problems the last time they met by pressing high, chasing everything and pinning them in their own half, they just sat off and let their rivals win comfortably.

With 30 minutes on the clock, the champions had already had seven shots, while Rangers hadn’t mustered a single effort. They were being dominated in midfield too. It was just really poor.

It didn’t even feel like they were particularly fired up. They were second best and made silly mistakes – McGregor’s goal was undoubtedly a Russell Martin mistake.

To be fair to Murty, he reacted after the game went 2-0 by bringing on Josh Windass for an unhappy Andy Halliday. But it was too little, too late and didn't change much.

Whoever comes in will have a massive job though. Based on today's performance, there is not a single player currently at Rangers that would get in the Celtic team.

Linked to Chelsea today, Rodgers showed how he’s made Celtic the best team in Scotland by a long way and why they need to do what they can to keep hold of him.

His first season in Scotland saw him go unbeaten domestically, winning the league and both cups.

They may have been beaten in the league this season, but they went into today’s match one game away from being crowned league champions and still on track for another domestic treble.

That’s painful for Rangers fans, and the former Liverpool boss carried on his great run against them since joining the Bhoys, now winning eight and drawing two games out of ten.

It summed up Celtic’s dominance in recent years. The Ibrox side knocked their rivals out of the Scottish Cup on penalties in 2016 but their last 90-minute victory over their fellow Glaswegians was in March 2012.

And when Rogic gave Celtic the lead, the game was already over. Since Rodgers took over, they are yet to lose domestically after scoring the first goal.

Dembele and Morelos: A tale of two strikers

Dembélé was Rodgers’ first signing when he arrived at Celtic Park and it didn't take long to show why he was brought in, scoring 32 goals in his first season at Celtic.

He hasn’t matched that this season, going into today’s game with just 14 goals, but the former Fulham striker is a man for the big occasions.

The 21-year-old had six Old Firm goals in eight games before today, including a hat-trick in his debut in the fixture.

He found the back of the net the last time the two sides met and was nearly on the scoresheet within the the opening ten minutes, with a great volley bouncing back off the bar. That showed Rangers they had to worry about him.

He may only be 21, but he caused 20-year-old McCrorie all sorts of problems, and looked reminiscent of when Didier Drogba in his pomp would bully defenders for Chelsea.

It was no surprise when just after half time he outmuscled the Rangers defender, who was forced to bring him down inside the box, resulting in a red card and a penalty to Celtic.

The Frenchman stepped up and chipped a cheeky panenka home to make it 3-0. The whole move summed up Dembélé’s confidence and just how many problems he had caused the opposition's backline in the semi-final. 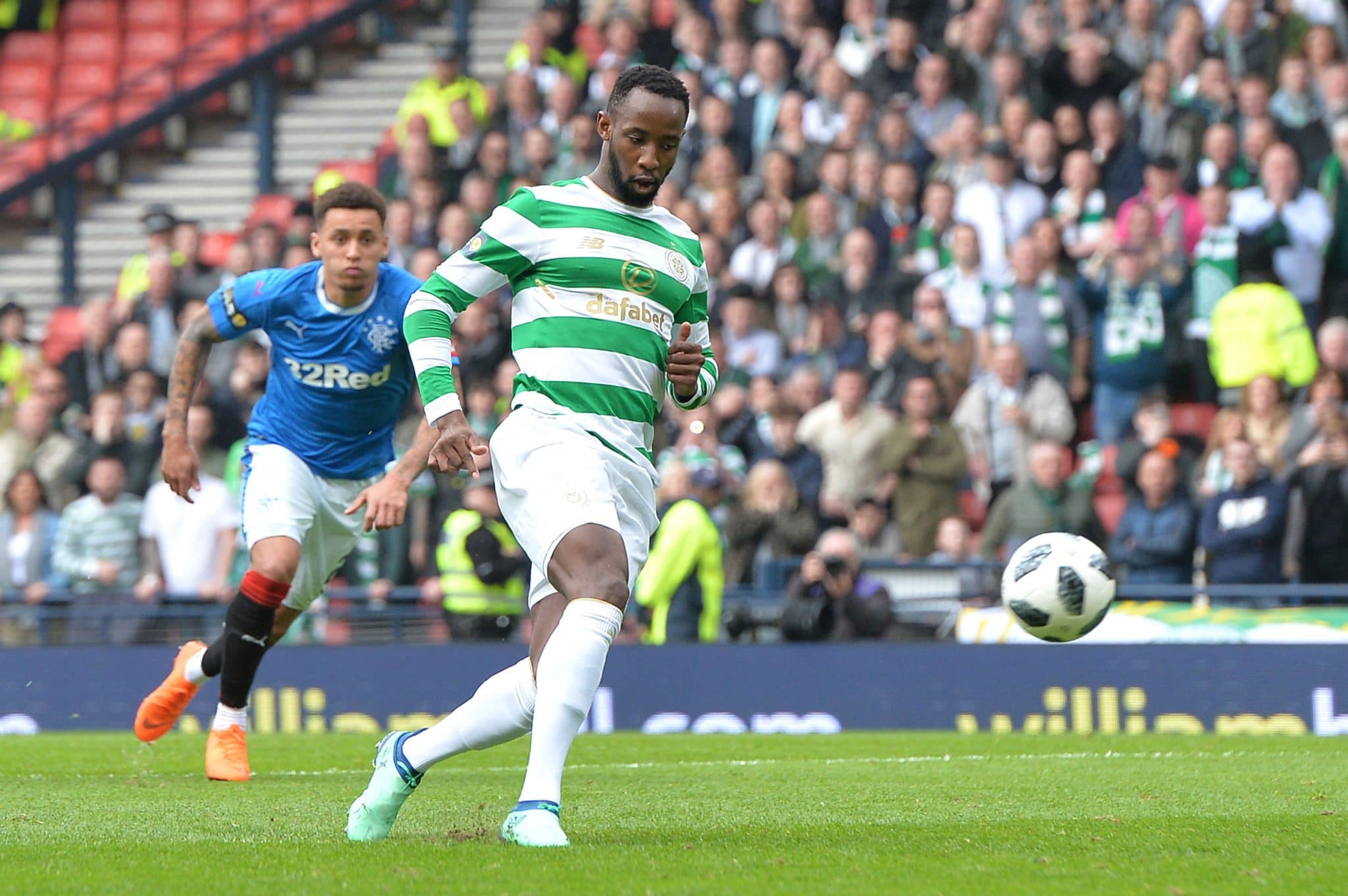 While many of former boss Pedro Caixinha’s signings haven’t worked out, 21-year-old Morelos has adapted well to life in Glasgow.

He is currently the second top scorer in the Premiership with 14 goals, with the Colombian becoming the main man up front at Ibrox thanks to his work-rate and physical presence.

Morelos caused all sorts of problems for Dedryck Boyata in the last Old Firm clash, but regardless of his good performance, it was only remembered for him missing a sitter late on which would have tied the game.

He is yet to score against Celtic, and a goal would have hoped to banish the memories from the last meeting. Craig Gordon pulled off one great save from him in the second half before yet another horrible moment against his club’s biggest rivals came once again.

The ball fell to the 21-year-old in the penalty area, there was no-one around him, and the ball was surely going to hit the back of the net with Gordon sitting on the ground.

Yet he produced a low, tame effort that was blocked by the keeper. Morelos’ reaction was to sit dejected on the floor. The Colombian needs one to bounce in off him against Celtic or it will become a mental issue.

He’s had a good goalscoring record since arriving, but once again he failed to prove that he can do it on the big stage when Rangers need him to step up.

Tom Rogic is the man for the big occasion

While Dembélé may be interesting a number of clubs, it is Rogic who’s been the man who shines on the big stages this season.

He got his third against Rangers this season with the game’s opener. It was a goal that oozed class too.

He picked the ball up at the edge of the box, before turning McCrorie inside out and calmly guiding it pass Wes Foderingham.

Every time Celtic bombed forward in the first half, he was there, and could easily have added to his tally.

He’s out of contract in 2019, and Rodgers will be keen on tying him down to a new deal so he doesn’t leave for nothing in just over a year’s time. A player of this quality needs to either leave for big money of commit to Celtic.

McCrorie not ready just yet

There are high hopes for McCrorie at Rangers. He burst onto the scene at Ibrox in September, first under Caixinha and then under Murty.

But he spent a while out of action with a foot injury, and was involved today after not playing in the 3-2 loss to Celtic last month.

Rangers’ backline may not have been at their best then, but bringing the 20-year-old in today to face Rodgers’ men wasn’t the answer.

He didn’t settle all game. He was turned inside out by Rogic for the opener and Dembélé bulled him throughout the match, which led to the young defender getting sent off and giving away the penalty that led to Celtic’s third.

He is undoubtedly a player with huge promise, but the Old Firm Derby proved too much for him today.