When Yannick Carrasco left Atlético Madrid last January to join Chinese Super League side Dalian Yifang, there was much consternation regarding the transfer.

While the CSL is viewed as a lucrative, understandable final stop for players in the twilight of their careers, the Belgian departed the European game at the age 24 and without having yet solidified himself as a one of the Continent's best.

Carrasco, who scored in the 2016 Champions League final, said all the right things, of course: “The Chinese championship is booming, the working conditions are excellent, the new infrastructures are modern and they are available for both players and fans,” the told Marca. “The level of play also improves every season.”

Yet the move felt like a waste of the former Monaco star's talent. A year on, however, and the winger appears set to return to Europe after his family failed to settle in the Far East.

Arsenal are in talks to sign Carrasco from Dalian Yifang, and the player's agent has urged the Gunners to work hastily before the transfer window closes at 11pm.

Carrasco's agent Christophe Henrotay said: “Everything is possible but it seems difficult to do. It would need decisive and rapid movement by the interested clubs involved to discuss and deal with the current club of Carrasco.”

Reading into Carrasco's form in China isn't easy, partly due to the standard of opposition he faced and partly because of his own side's struggles. He played 25 times for Dalian – who finished eleventh in a 16-team division – in the 2018 season, scoring seven goals and claiming five assists.

They are not standout figures, but he did complete more take-ons (3.61 per 90) than any other midfielder or winger and his scoring attempts per 90 of 3.05 was the eighth highest total.

So perhaps it's best to dive into his final six months at Atlético to get a better gauge on what Gunners fans can expect of Carrasco should he complete a deadline day move to the Emirates. 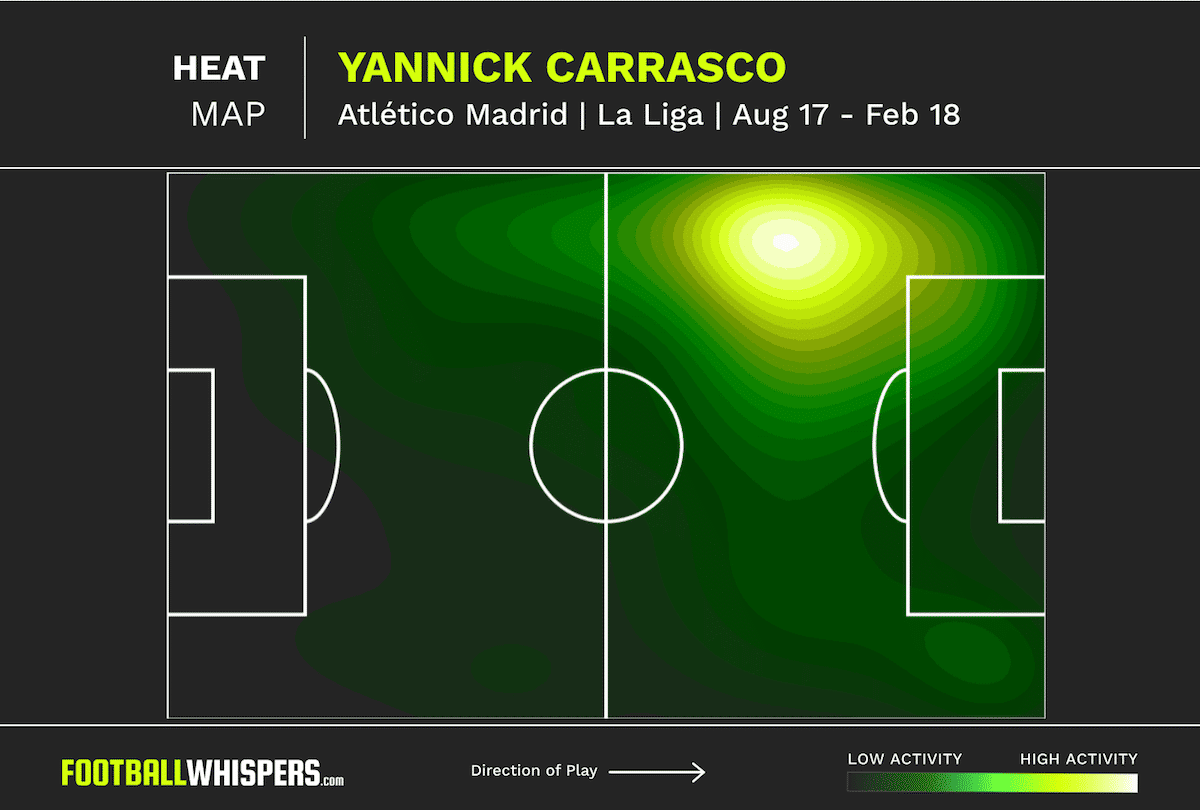 Predominantly stationed on the left flank, as the heat map above highlights, the Belgium international was a constant threat when he moved inside onto his stronger right foot.

Much like during his time in China, few could match Carrasco when it came to beating opponents; his 3.50 successful take-ons per 90 was the fourth best in La Liga before he left for Dalian.

There was more end product to his game under Diego Simeone, however. His assists per 90 of 0.40 was only bettered by one midfielder between August 2017 and February 2018, while his goals per 90 of 0.30 was the eighth highest. 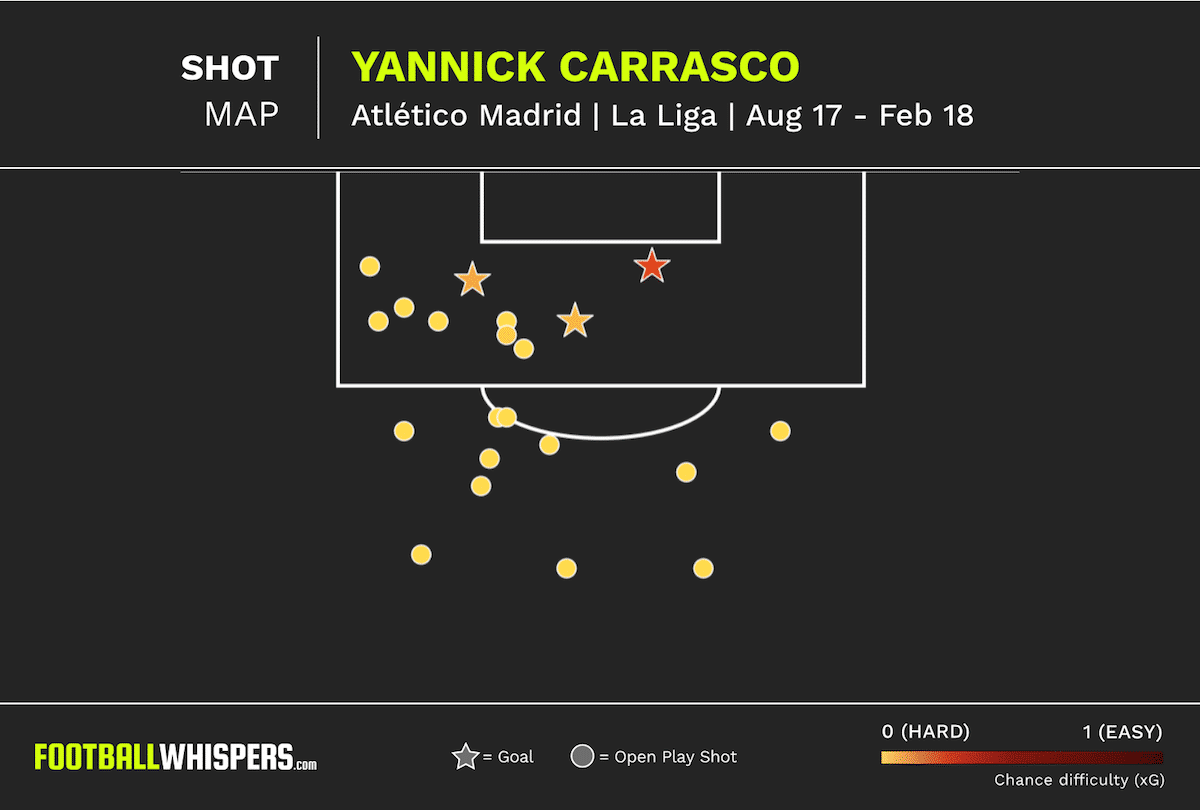 At this point, barring the financial incentive, it's hard to understand quite why Atleti allowed Carrasco to leave the Wanda Metropolitano, especially given the numbers he had posted had come from only eight starts.

Yet a breakdown in his relationship with Simeone was reportedly the reason behind his departure. And that is one aspect of any move Arsenal should be wary of.

Carrasco isn't the easiest to manage. There are players who are far more hassle than the Belgian, but his sulks, either after being left out of the starting XI or after being substituted, did not endear him to the Atleti dressing room.

It's why a six-month loan move, which according to Unai Emery is the only kind of deal Arsenal can strike, makes sense. The Gunners would be bringing in a high-quality player who has a point to prove, and potential a permanent deal to earn at the Emirates.

So far this term, Henrikh Mkhitaryan, Alex Iwobi and Peirre-Emerick Aubameyang have occupied the position with varying degrees of success. A fit and focused Carrasco would be a stronger alternative to the former two, and would allow Aubameyang to return to the No.9 role he thrives in.

If the numbers add up for Arsenal, Carrasco's signing would be a masterstroke. One which may help the Gunners earn a place in the Premier League top four come May.