It is that time of the year again. No, we’re not talking about the return of the Champions League. It’s the time of the year which sees Portuguese media outlets linking Sporting, Benfica and FC Porto players with big-money moves abroad, namely to Premier League sides.

With the Bruno Fernandes saga now at an end, O Jogo have turned their attention to Carlos Vinicius. The 24-year-old has been in rampant form this term, averaging a goal every 73 minutes in the Portuguese top-flight. His double against Porto over the weekend was reportedly watched by scouts from Liverpool, Chelsea, both Manchester clubs, Internazionale and Juventus.

Vinicius only joined the Portuguese giants in the summer from Napoli in a deal worth £15million. The Brazilian was only on the Italians' books for a year but he spent that entire season out on loan.

Initially, with Real, a club in Portugal's second division, his impressive return of 20 goals in 38 matches enticed the Partenopei. He spent the first half of the 2018/19 campaign on loan at Rio Ave, scoring eight in 14, before moving to Ligue 1  Monaco where he helped the principality club stave off relegation.

Last summer's move to Benfica went under the radar, though. With João Félix’s record sale to Atlético Madrid and the arrival of Real Madrid’s Raúl de Tomás at the Estádio da Luz, signing a striker whose only real impact was in the Portuguese second tier wasn’t going to dominate the headlines.

However, fast forward six months and De Tomás is back in LaLiga with Espanyol and it is Vinicius leading Benfica’s title challenge.

The Eagles lost to rivals Porto recently but they’re still four points clear at the summit. It was by no means one of Vinicius' better performances yet he still finished the match with two strikes to his name.

In many ways, it was a quintessential Vinicius performance. He was in the right place at the right time to fire home both goals. But one of the most underappreciated skills in football is just that. 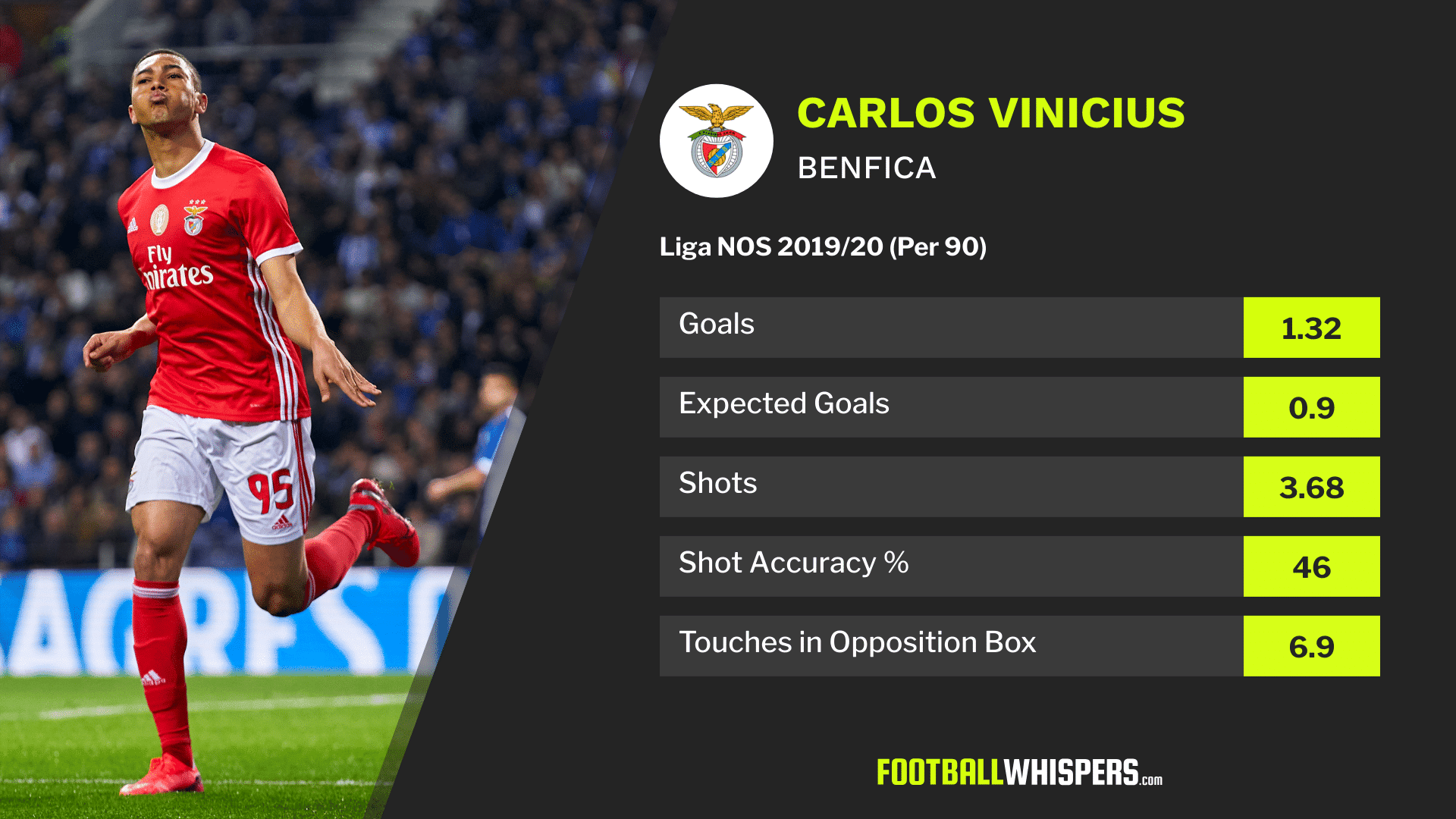 What Vinicius is doing is on a par with what Paco Alcácer did at Borussia Dortmund last season and what Erling Håland is doing at the Westfalenstadion following his January switch. The sample size isn't the largest but you can't ignore the numbers he's posting.

The left-footed forward is overperforming his expected goals average of 0.9, quite significantly it must be said, but even if he reverted to par he'd still be on course to score 34 goals over a 38-game season. That puts things into context.

His return of 1.32 goals per 90 is unsustainable but when you watch him play there's nothing irregular about the chances he's getting. He isn't running hot. This means that with the same level of service, he could replicate his expected numbers elsewhere.

Vinicius' other stats back that up, too. He's averaging 3.68 shots, a decent volume on a per-90 basis. He is frugal with his efforts, landing 46 per cent on target, and he's having a decent number of touches in the penalty area – 6.9 to be exact. This paints a picture of a forward whose output is sustainable so long as conditions don't drastically change.

Intelligent with his shot selection, Vinicius isn't one to just pepper a goal with efforts and only seems to shoot when he's in a good position. It sounds simple and, to be fair, it is. But too many attackers waste possession with questionable efforts from distance.

The 6ft 3in powerhouse looks like a traditional target man but, as the stats suggest, he's much more of a poacher. While he is an intriguing player, the €100million release clause in his deal makes any move for him a difficult one.

At 24, Vinicius isn't a player you'd sign for his potential. That, combined with his price, mean he'd be signed for the here and now. It's difficult to envisage any of those teams linked with him parting with such money for a relatively unknown quantity.

As talented as he is, Vinicius may be destined to be one of those players who is perpetually linked with a move abroad before ultimately playing out his career in Portugal.