On 2 October 1999 there began a story of a dream fulfilled by roaring pride and extraordinary determination.

FC Barcelona were playing Real Valladolid at the Estadio José Zorrilla. The Catalan side, who were reigning champions of Spain, cruised to a relatively routine 2-0 victory thanks to goals from Patrick Kluivert and Rivaldo.

It was a match that would have been almost completely unremarkable, had it not been for the fact that a future club legend made his senior Blaugrana debut – not that anyone knew just what a magnificent player the shaggy-haired teenage right-back would go on to become.

Carles Puyol was born and raised in La Pobla de Segur in northern Catalonia. He, along with his older brother Josep Xavier, was a diehard Barça fan, and the pair would emulate their heroes as they played football in the streets.

As a youngster “Puyi” played in goal, but after his mother sought medical advice for the knocks and shoulder problems her son was developing from diving on the hard ground to save goal-bound shots, it was decided that the boy should hang up his gloves and seek an outfield role.

And with that, Puyol became a striker in his local team.

After attending a trial when he was 17, Puyol was selected to join Barcelona’s famed La Masia youth academy and his position was again switched, this time to central midfield and then right-wing and right-back.

So by the time he was given his first-team debut by Louis van Gaal, 17 years ago today, the 21-year-old was used to fighting for his place.

He entered the fray in the second half, replacing Portuguese winger Simão Sabrosa with Barça leading 1-0.

The straggle-maned debutant rampaged up and down the touchline, tracking runners and bursting forward to spring attacks, with what would become his trademark tenacity.

Van Gaal’s men doubled their lead with Puyol on the pitch; a job well done by the young Catalan, earning himself the role of deputy to Dutch international Michael Reiziger for the remainder of the campaign.

Just over a year before making his senior bow, Barcelona had agreed to sell Puyol to Malaga. But, with the transfer agreed between the two clubs, the player refused to move; he wanted to stay and fight for his future at the club.

And what a decision that proved to be, as Puyol would go on to captain his beloved Barça through the most successful era in their history, but not before making another positional shift – this time to become one of the best centre-backs on the planet. 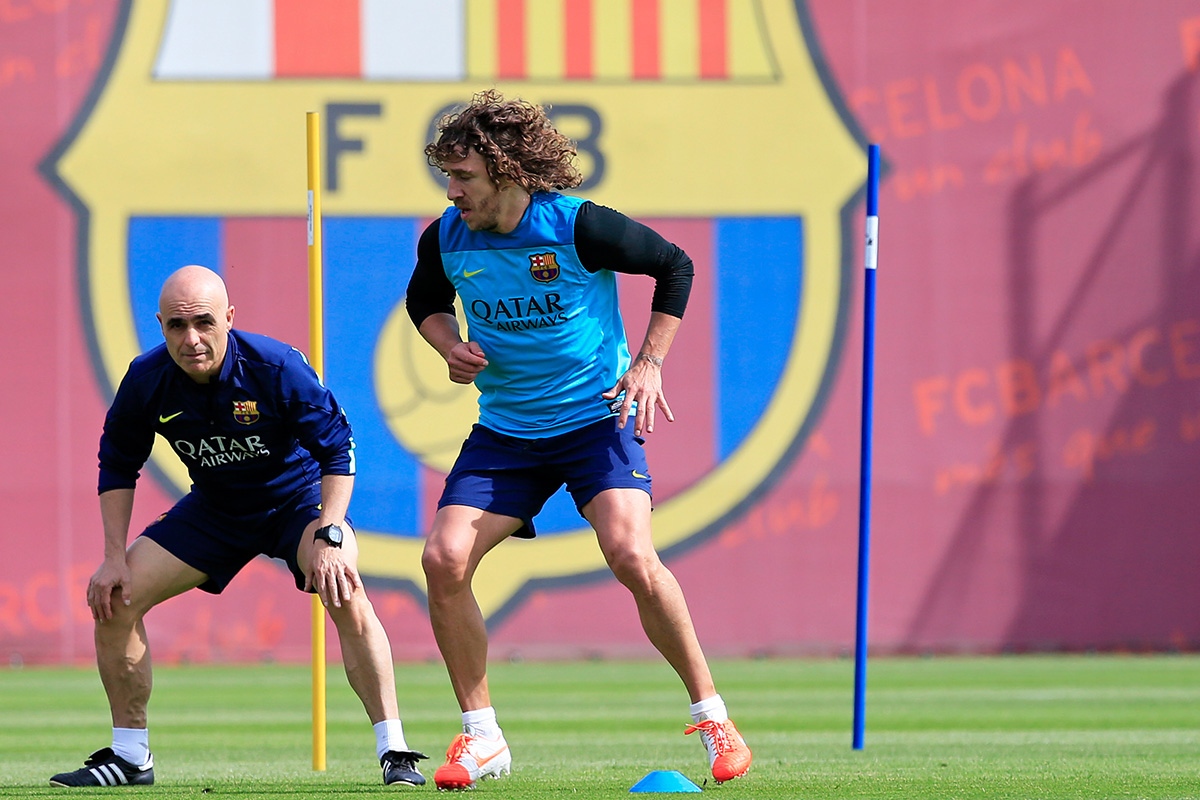 He certainly wasn’t the most technically gifted footballer to graduate from La Masia – a production line which has churned out the likes of Pep Guardiola, Xavi and Andres Iniesta – but Puyol mastered the intangibles. The unquantifiable attributes such as heart, will to win and bravery were abundant in his arsenal. In American sports parlance it would be called “gameness”; there was never a more “game” defender than Puyol.

“I find it very hard to think about losing a match and not being pissed off,” Puyol once said. “I get pissed off even if it’s just a match during a training session. I don’t think I’ll ever change. You need to be very competitive to make it to the elite.”

His former youth coach, Jordi Mauri, recalled an anecdote from Puyol’s early years in an interview with TV4: “Once, when we were playing foot-tennis, Carles threw himself full length to try to rescue a point with a diving header. When he got up he had mashed his face and it was all covered in blood – but he was just pissed off that he’d lost the point and wanted to get going to win it back.”

In his 15 years in the Barcelona first-team, el toro (the bull) made 593 appearances and scored 18 goals. The Spain international was named club captain in 2004, and his assumption of the armband — which was fittingly emblazoned with the red and yellow horizontal stripes of the Catalan flag – coincided almost immediately with the end of a six-year trophy drought for the club.

Barça hadn’t won any major silverware since van Gaal guided them to La Liga success in the 1998-1999 campaign. But in Puyol’s first season as captain in 2003-04, under the tutelage of another Dutchman, Frank Rijkaard, the Camp Nou was again home to the Spanish top division trophy.

And on the international stage Puyol accumulated exactly one-hundred caps for La Roja and formed part of a defensive bedrock which enabled Spain to entertain the world with their beautiful passing style on their way to European Championship and World Cup glory.

Puyol’s defining moment in the famous red shirt of Spain came in the semi-final of the 2010 World Cup in South Africa. Vicente del Bosque’s men were playing a youthful and talented Germany team and, although they were dominating play, they had been unable to make a breakthrough until Puyol crashed home a bullet header from a Xavi corner in the 73rd minute. Spain won 1-0; Puyol had just put his nation through to the World Cup final. 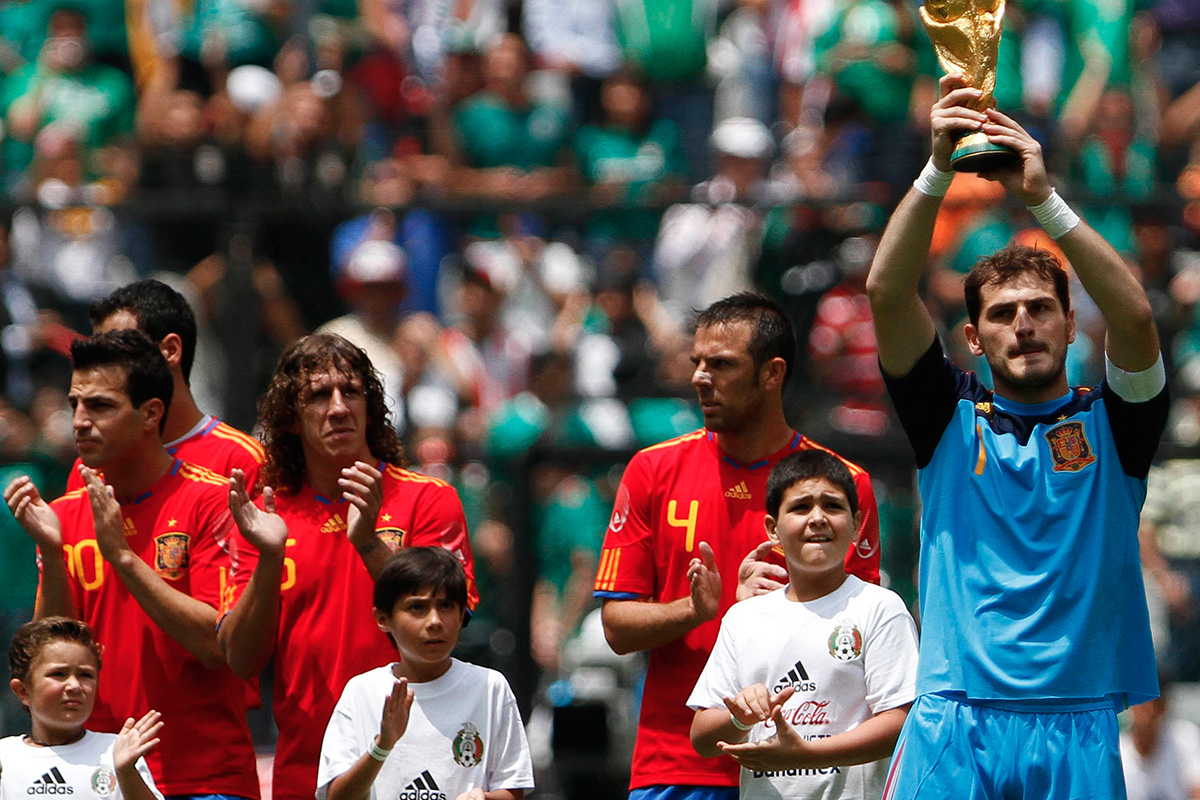 In his superb book Spain: The inside story of La Roja’s historic treble, Graham Hunter described it as “the best, most powerful header I have ever seen.”

“I swear, I knew it was a goal from the moment my boot made connection with the ball for the corner,” Xavi said after the game, recounting the moment his great friend scored the semi-final winner. “Somehow I just knew. I looked up, saw Puyi and thought, ‘don’t miss this one, this one’s a goal.’”

And rather than bask in the glory of his moment, Puyol was typically humble: “I don’t want the goal against Germany to be historic. I want a team-mate to go one better on Sunday [In the final].”

Puyol retired from football in 2014 with a trophy cabinet packed with team and individual honours. His career is a testament to the power of determination, perfectly summed up by one of his tattoos, which reads: “Power is inside the mind. The strong can endure.”