Ordinarily, Cardiff would be grateful of the quick turnaround of fixtures to bury the turgid display they put in Saturday. Is West Brom visiting really the fixture in which to do that though? Find out with our Cardiff vs West Brom match preview with free tips, predictions and odds mentioned along the way.

Cardiff boss Mick McCarthy will want a reaction from his team after getting hit for five at the weekend but with five losses in their last six games it would be a brave person who backs the Bluebirds to win. That's especially true when you consider who they're playing. West Brom sit second and remain unbeaten after nine games. The Baggies had looked set for a fourth consecutive draw on Friday but a late winner means their dressing room will be absolutely buzzing about another match.

Label us as insane if you want but we don't see this match having many goals. We know Cardiff have just lost 5-1 but that won't happen again; at least not right away. Their prior two games both saw just a solitary goal whilst four of West Brom's last five have been under 2.5. The other factor to consider is that off the back of such a bad result, Cardiff will look to shut up shop and show they're not a pushover. Even if they lose the game – as we expect them to – they won't want it to come in embarrassing fashion. That's the reaction McCarthy will get from his team.

West Brom forward Karlan Grant hadn't hit the net for a while before Friday's game. He was the man who stepped up when the Baggies needed him though with a brace seeing his team to victory. Grant would probably point to the fact he's not been getting a full crack at 90 minutes in recent weeks but there is no question he'll be in the starting XI Tuesday. A confident striker is a good striker and Grant will be confident without question.

Find the best odds for Cardiff vs West Brom

Small sections of Cardiff fans were starting to criticise Mick McCarthy before the weekend. It's fair to say the voices of displeasure will have grown now. The Welsh side need to turn up with a performance on Tuesday; hard work, desire and quality will all be needed. A big performance from Marlon Pack in the engine room could help set the tone for the rest of the team. For West Brom, they've had a wobble – three draws – but still haven't lost and, after winning a tough game on Friday, will be looking at the top of the table and thinking they can win this league. Grant being back in the goals is great for them but what's better is the fact his partner Callum Robinson provided both; these relationships are critical to team success. 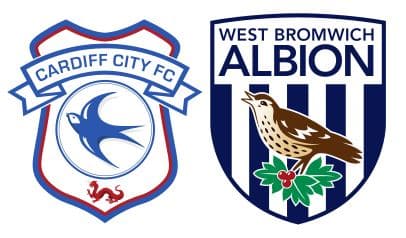