Derby might be dropping into League One next season but they've done themselves proud on the pitch. Can the put in one last stellar display for the Pride Park faithful? Find out with our Derby vs Cardiff match preview with free tips, predictions and odds mentioned along the way.

Forget league positions, Derby have been fantastic this season and their home form in particular has been hugely impressive with six wins and two draws from their last 10 games at Pride Park. We expect them to grab another home win here. Cardiff haven't been great this season and have lost seven of their last 10 games on the road – including their last three. On top of that, regardless of venue, the Bluebirds are winless in five games so arrive in what will be a surprisingly buoyant environment desperate for their summer holidays.

Goals won't be in large supply

Derby's recent form has seen a few more goals hitting the net – albeit not all for them – but we're confident in our under 2.5 goals tip here. Derby have a season long total goals average of just 2.2. Cardiff meanwhile come into this game with their last four matches having gone south of the 2.5 mark. To further cap our prediction off you can look to the head to head record; three of the last five meetings between the sides have gone under 2.5.

Here are the key stats & form guide for Derby vs Cardiff

Derby vs Cardiff: Let's look at the predicted lineups

Cardiff have stayed up but things at the club feel flat. Derby have gone done but the place is generally buzzing. What will happen as the two meet in the season finale?

Derby signing off the 2021/22 season in front of their home fans feels like a fitting end to what has been a tough campaign for the Rams. Wayne Rooney will want his men to sign off in style regardless of their fate already being sealed.

Cardiff will look at Derby and be grateful it's not them heading into the third tier. For a long time it looked like it might be. The bad news for the Bluebirds is that they're ending the campaign in shocking form too and anything but a win at Pride Park will see them enter the summer feeling very low about next year.

A quickfire FAQ on Derby vs Cardiff 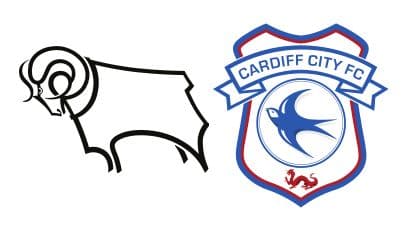