Perhaps the most anticipated match of this Championship round is the Cardiff vs Bournemouth duel. If you want to learn more about this game, check our preview and free betting predictions.

Our favourite betting tips for Cardiff vs Bournemouth

It can be hard to decide on the right bet for a close duel like the Cardiff vs Bournemouth matchup. So, check our top betting tips for this match if you need some help:

Cardiff and Bournemouth to Draw

Both teams have started the new season in Championship well, although Bournemouth is doing much better since they are currently the only undefeated team in the league next to West Brom. In any case, this should be a very interesting duel and we feel that it's going to be very close as well, so our prediction for this match is for Cardiff and Bournemouth to draw.

Cardiff vs Bournemouth to Draw at Half Time

Since we expect to see a draw in this game, we also expect the teams to be equal at half time. After all, that's the case in most matches that end in a draw. In addition to this, Cardiff drew at half time in two of their three matches that they played at home, while the same is true for two of the three Bournemouth away games in the league this season.

The last two matches between Cardiff and Bournemouth have ended with both teams scoring, although the three of their h2h duels before that didn't. However, we expect the latest trend to continue and both teams to score in this game, especially since this happened in 71% of all Cardiff matches in the league so far and in 57% of all Bournemouth games.

The best odds, stats, and more for Cardiff vs Bournemouth

If you want to bet on the best Championship odds, including the Cardiff vs Bournemouth duel, check our list of odds from the top UK bookies:

Cardiff vs Bournemouth preview: A very interesting and close duel

With three wins, two draws, and two losses, Cardiff is doing pretty well at the start of the new Championship season. They are in the ninth place in the standings at the moment, but very close to the playoffs. Of course, it's still too early to give any predictions, but Cardiff can be pleased with how things are going for them. On the other hand, Cardiff is struggling with injuries since they have six injured players at the moment.

After losing in the semi-finals of the playoffs last season, Bournemouth is hoping for another chance of getting the promotion – preferably a direct promotion this time. And they are on a great course to doing that at the moment with four wins and three draws in the first seven rounds. This is enough to put them in the second place, one point behind Fulham. Stanislas and Cook are the only injured players at the club right now.

Common questions for Cardiff vs Bournemouth 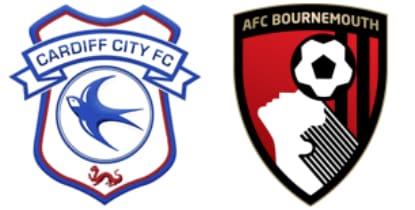