Cardiff vs Blackpool: Check out our betting tips

Cardiff's relegation woes are easing with each passing game at the moment and safety nearly looks assured. Can they move three points closer to confirming it here? Find out with our Cardiff vs Blackpool match preview with free tips, predictions and odds mentioned along the way.

Cardiff to take all three points

Blackpool have had a relatively better season than Cardiff so far, however, it's worth noting that Blackpool have won 11 games this season, and only three of those wins were away from home. As a matter of fact, Blackpool have no wins in their last seven road games in all competitions. On the other hand, Cardiff have enjoyed a good run of form; they've won four of their last five league games, and they've won their last three home games. Also, Cardiff have had Blackpool's number in recent encounters; they won four of their last five meetings with Blackpool. With this in mind, we're making the prediction that Cardiff will take all three points from this game.

Back both teams to score

Here are the key stats & form guide for Cardiff vs Blackpool

Football is funny, isn't it? People praise the season Blackpool have had but criticise Cardiff's campaign. Well, if the Bluebirds win this game they will be just three points south of the Seasiders. Still, suppose they lose, that six point gap will become nine and things will look poor for Cardiff – even if they will stay up.

Cardiff continued their good run of form by defeating Coventry a few days ago; they have now won four of their last five league games. Steve Morison's men have won all of their last three home games; they'll be eyeing their fourth consecutive home win as Blackpool come visiting.

Blackpool have had some mixed results recently; they have two wins, two draws and two losses in their last six games across all competitions. Neil Critchley's men are currently on a seven match winless streak on the road; they'll hope to put an end to that unwanted streak as they take on Cardiff. 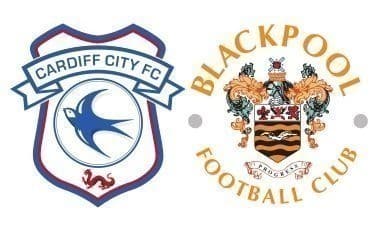