The Klopp of the Alps couldn’t handle the Welsh hills.

Ralph Hasenhüttl got his stint as Southampton manager off to a losing start with 1-0 defeat to Cardiff. The scorer, Callum Paterson, has his coach’s appreciation.

“I don't honestly know what I'd do without him,” Neil Warnock said after the match. Paterson might say the same in return. The Bluebirds manager convinced the club to pay £400,000 in compensation money to Hearts to sign the then 22-year-old Scot, who was still recovering from a cruciate ligament injury.

“I’d been playing well and all of a sudden my world had come crashing down,” Paterson said last year. “That was me struggling to find a club, I thought. It was two or three days before the window started, my contract was running out and I was due to leave Hearts.

“I was already wondering who would be willing to wait for me to come back from a serious injury.

“I was worrying I could be facing having no options but thankfully the manager was still interested and put his faith in me that I would come through this.

“It was just what I needed and it’s made me make sure I’ve really put the work in to come back to where I was before and repay him.”

Paterson is willing to put a shift in anywhere for the manager who gave him such assurance in a difficult time. Although he’s mainly played as a forward this season, he’s also made starting appearances in midfield and at right-back.

“He's just a tremendous lad,” Warnock added after the Southampton match. “He'll play anywhere for me, do anything. In the old-fashioned days, we used to talk about players running through brick walls, but if I asked him to do that he probably would!”

Having received over 100 traditional long balls already this season — one of a select few to do that so far, along with Aleksandar Mitrović and Sam Vokes — he’s able to fit into the archetypal striker role we’d expect from a Warnock team.

But not only is he a good stylistic fit, he’s been effective too. Paterson’s goal against the Saints made it three wins in five for the Bluebirds, propelling them up to 14th, four points above the relegation zone.

The Scot has a knack for getting on the end of decent chances, with four shots inside the six-yard box this season. That’s the same amount as Roberto Firmino and Marcus Rashford, and only one fewer than Sergio Agüero. 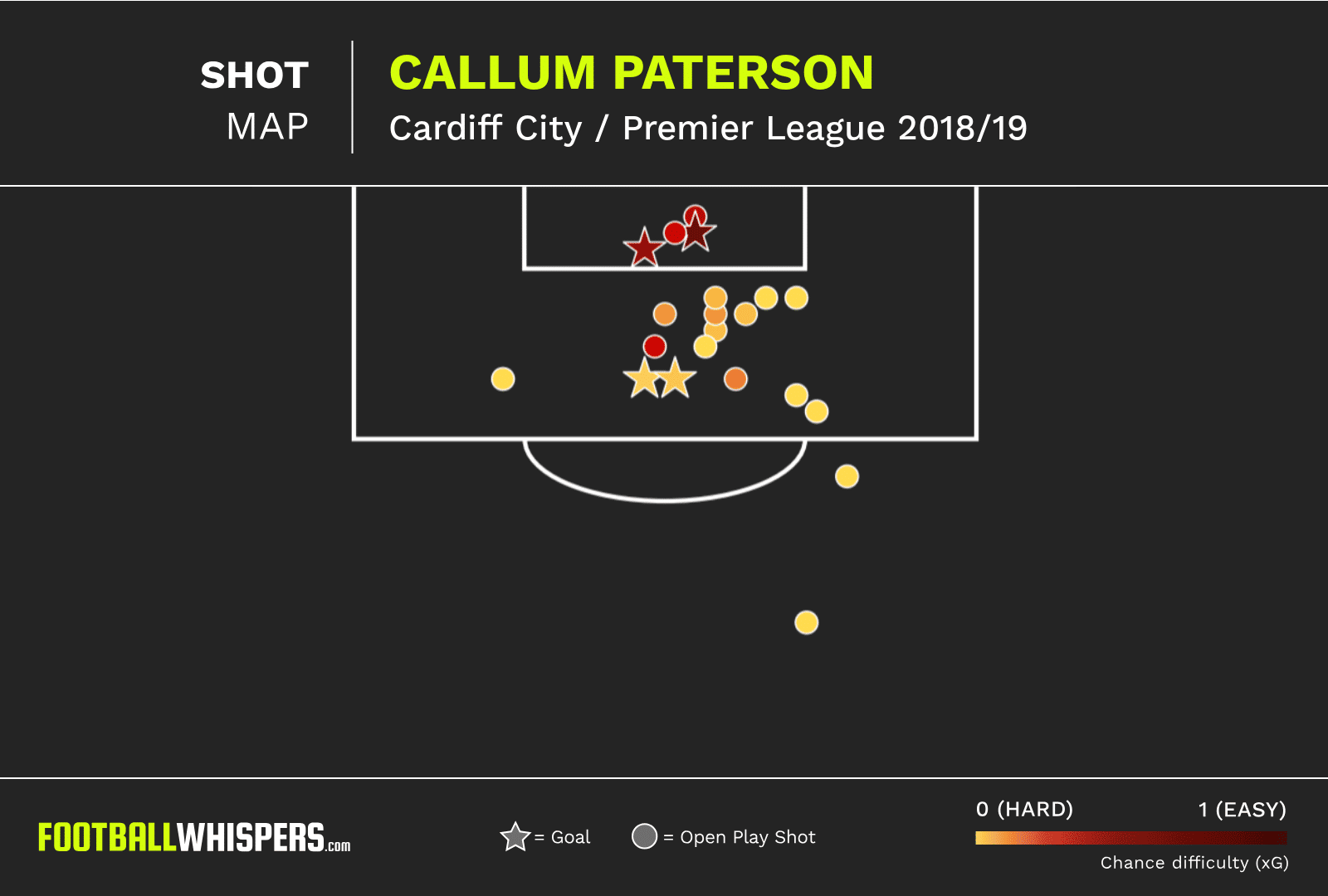 “His work rate is outstanding, and when you work as hard as he does you can play anywhere on the pitch,” team-mate Kadeem Harris said recently.

“I’m not surprised (he’s playing centre-forward) because his work-rate is that good he tires out the defenders he plays against.

“He gets in the positions to get goals and it’s showing now that he can do it.”

Cardiff will be hoping that he keeps it up and, by the sounds of it, Paterson isn’t going to give up working hard for Warnock any time soon.