Round 5 of the Chinese Super League brings together Cangzhou Mighty Lions and Tianjin JMT at the Yutong International Sports Center. Both sides have been unimpressive in the opening rounds of the campaign and will want to return to winning ways at each others' expense.

After four matchdays, both Cangzhou and Tianjin have two stalemates to their names. While the hosts have accumulated a win, it was in their opening round and three games apart. However, in previous meetings, the side hosting has had the upper hand and made their advantage count. With the Lions only conceding three goals to the Tigers five, expect their superior defence to end their winless run and force a move up the points table.

Neither the Lions nor the Tigers have been impressive in front of the goal. They average less than a goal with three goals apiece from their four outings. The Lions have conceded the same amount while the Tiger's tally stands at five. Interestingly both sides have seen three of their four meetings conclude with Under 2.5 Goals and we expect a similar conclusion to this league encounter.

Cangzhou Mighty Lions vs Tianjin JMT: Check out the best odds and the latest stats

A sixth-minute strike from Frank Acheampong was enough for Shenzen to get a win over Cangzhou. The Might Lions have been impressive at the back but it is efficiently going forward where they lack in substance. In the last iteration of this fixture, they scored two past the Tianjin Tigers and will want to repeat their heroics to get back in their groove.

After finishing the last season on a high with three wins and a draw, a lot was expected from the Tigers. Nothing has gone according to their plans as they languish in relegation slots. They are averaging a goal per game but it is the two they concede every game that his holding them back. 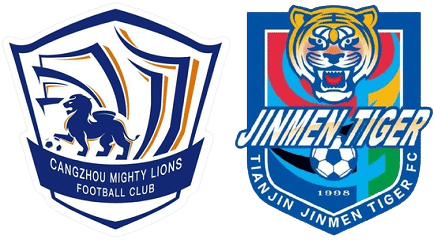 Where is the game being televised? Yutong International Sports Center (Shijiazhuang).