Cangzhou Mighty Lions and Meizhou Hakka face off in the Chinese Super League on Thursday, June 9th. The Lions are favourites to claim three points at Meizhou Haka’s expense. Read our free predictions and find the latest odds for the fixture below in our detailed match preview.

Cangzhou Mighty Lions battled their way to an opening day victory at Beijing Guoan last week to kick their new campaign off with a bang and a follow-up win looks possible against newly-promoted Meizhou Hakka on Thursday. The visitors are expected to be a little green this term having never competed at Super League level before and with experience lacking, they could come unstuck in their first away test of the season.

Both teams to score landed in Cangzhou Mighty Lions and Meizhou Hakka’s first fixtures of the fresh campaign in China and there was enough evidence on show in their respective games against Beijing Guoan and Tianjin JMT to suggest that clean sheets could be beyond the defences again on Thursday. With early wrinkles at the back to iron out for both teams, expect action in each penalty area this week.

Check out our list of the best stats for Thursday’s match below alongside a tool to help you choose the best odds.

Below, you can find all of the latest team news and injury updates for Cangzhou Mighty Lions’ skirmish with Meizhou Hakka in the Chinese Super League on Thursday.

Cangzhou Mighty Lions did well to record an opening day win at Beijing Guoan last week, though the late red card picked up by Guo Hao was a fly in the ointment and the defender will sit Thursday's game out through suspension. Goalscorer Bughrahan Iskandar was withdrawn after 68 minutes, though he should retain his starting spot following his heroics.

Meizhou Hakka started life in the Chinese top tier with a 1-1 draw at home to Tianjin JMT last week with Brazilian Rodrigo Henrique netting their crucial effort. Guokang Chen was taken off at halftime in that game and he could be replaced in the starting line-up by Yilin Yang this week. 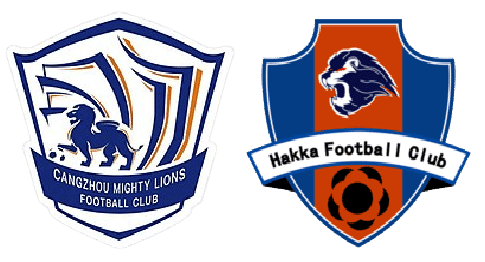 Who is Cangzhou Mighty Lions’ manager?

Svetozar Šapurić is in charge at Cangzhou Mighty Lions having joined the club in November last year.

The Cangzhou Stadium will host Cangzhou Mighty Lions vs Meizhou Hakka on Thursday.