Hakim Ziyech may not have been Ajax’s biggest star but he was one of their most in-demand last summer.

With Frenkie de Jong and Matthijs de Ligt deciding their futures fairly early on, attention quickly turned to where the Amsterdam club's creator-in-chief would end up.

Reports linked Liverpool, Manchester United, Arsenal, Tottenham Hotspur, Bayern Munich and Borussia Dortmund with the Moroccan playmaker. But, to the surprise of everyone, Ziyech remained in the Eredivisie. The former Twente man even penned a new deal with the Dutch champions in October, removing his release clause.

He looked set to remain in the Netherlands as Ajax's one constant in attack. But 2019/20 will be his final season in the Dutch capital, with reports claiming he is close to finalising a deal with Chelsea.

The two clubs have agreed a £40million fee for the in-demand 26-year-old and, according to De Telegraaf, Ziyech is only in talks with Chelsea. The Dutch publication states that Blues boss Frank Lampard instructed the club to ‘immediately complete' a move for Ziyech as he plans to reinforce his attacking options for next season.

Few expected Chelsea to be at the table for the Ajax maestro. For starters, Lampard is a big admirer of Mason Mount and the two play in similar positions. The Blues also have Callum Hudson-Odoi, Christian Pulisic and Willian to fit into their attack. Jadon Sancho is also believed to be a transfer target, too.

While Ziyech doesn't evoke the same reaction as a Sancho, his signing could prove to be a masterstroke for a relatively inexperienced Chelsea side. 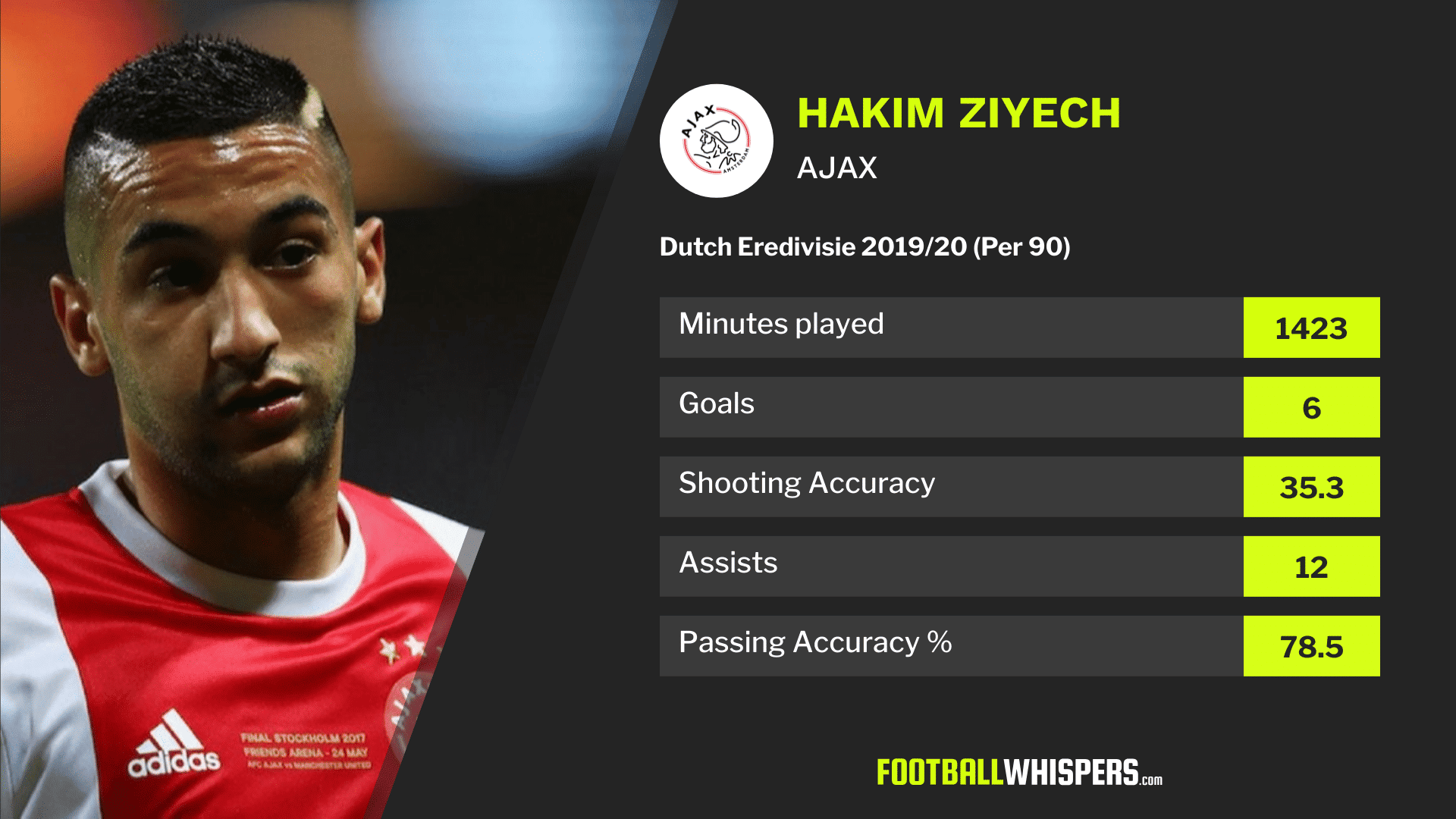 Along with Dušan Tadić, he was the poster boy for Erik ten Hag's side's run to the Champions League semi-final last season. Ziyech chipped in with three goals and three assists in 11 appearances. He was a livewire and a general nuisance in most games.

For example, his 0.73 Big Chances created per 90 can only be bettered by four players in the Champions League during that memorable season. He was in the top three for dribbles attempted (5.66) and third for shots (per 90).

He creates. He can beat a man and there’s end product there. In terms of an attacking player, there isn’t much more Ziyech could do to tick the boxes. And, perhaps more importantly, he has shown he can perform on the biggest of big stages.

There are plenty of positives to signing a player like Ziyech. But there are also a number of things to consider.

Namely, despite posting impressive numbers for the Eredivisie champions, his style of play may ultimately limit him.

He thrives in the Ajax set-up, partly because Ten Hag’s team is constructed to allow it. Deployed in the attacking three, he isn’t tasked with getting beyond the front man. He isn’t judged on whether or not he can make the most of the space created by Tadić in his false-nine role like other forwards are.

In many ways, he’s playing the same role as Philippe Coutinho did when he was at Liverpool. Something of a luxury, he’s able to play his game because of the work others do. That isn't to say he doesn't put in a shift – he does – it's just he's different to the norm now. He drops deep and influences play with raking passes and incisive through balls. Many of his goals come from arriving late into the area.

While he’s one of the best at doing just that, very few teams play with such wide players these days. Attackers are, for the most part, there to score goals. Not just any goal. A certain type of goal.

They need to be able to lead the line. They need to be comfortable playing as a centre-forward at times. Take Sadio Mané, Mohamed Salah, Heung-min Son and Anthony Martial. They can all do it. They don’t just do a job there, they excel in that role. It’s what's expected from these types of attackers.

Chelsea have Tammy Abraham, a quintessential No.9 who does, at times, drop deep to link play. During those moments, the wide forwards have to drift inside otherwise attacks are easy to thwart. Ziyech doesn't naturally do this and adding it to his game, at 26, isn't going to be easy.

However, if Chelsea adapt and if Lampard has a clear plan for Ziyech, he has the potential to be one of the signings of the summer.

However, if he tries to force him into a busy attack and he starts asking him to do things he isn't used to then the Ajax man may struggle to adapt to life at Stamford Bridge. It'll be intriguing to watch unfold.