To the delight of many in the media world who like to claim the Premier League is the best in the world, Pep Guardiola’s revolution at Manchester City hasn’t been as seamless as people had expected.

City are by no means struggling but after 10 consecutive wins at the beginning of the season Pep’s team went six games without a win throughout October. The Guardiola freight train, which had decimated both La Liga and the Bundesliga, had been derailed the Premier League.

Defeats at the hands of Tottenham (2-0) and Chelsea (3-1) were sandwiched between three home 1-1 draws against Everton, Southampton and Middlesbrough. Yet, despite these disappointing results City are just seven points off the top of the league and are only one point behind third placed Liverpool.

A lot of the good work is going under the radar because of the high expectations placed on his shoulders. It’s a transitional period for an ageing squad with Pep trying to evolve their style to suit his plans, all while competing in both domestically and in the Champions League. Guardiola resisted the urge to undertake a large squad overhaul in the summer but after six months of trying to get the players at the club to fit his style perhaps it’s time he delves into the transfer market to bring in better suited player.

With this in mind, two areas of the Manchester City squad which need improving are at centre-back and centre-midfield. With Vincent Kompany out injured Pep has been forced to used Aleksander Kolarov in the middle. The Serbian does a job, but he doesn’t excel there, and that’s not good enough for a team like City. Since the arrival of Pep, City have been linked with a whole host of defenders including Leonardo Bonucci, Antonio Rudiger and Victor Lindelof. It’s the former on that list who appears to be the perfect centre-back for Pep. In midfield, City have been linked with Dortmund’s Julien Weigl and if they’re in the market for a holding midfielder who can be moulded by Pep then they should look no further.

Guardiola’s City average the highest possession per match in the Premier League with 60.6%. To be able to dominate the ball like they do the centre-backs need to be confident and composed on the ball. To add context to this claim – on average Manchester City attempt roughly 615 passes per 90 minutes and of those 615 the centre-back pairing attempt 110 of them. So as you can see, the centre-backs in the Pep system have a lot of the ball.

Victor Lindelof is a 22-year-old central defender who plays for Benfica. He joined the Portuguese giants in 2012 from Västerås SK and made his debut in 2013. His performances have attracted interest from all over Europe, with City’s rivals United reportedly keen on partnering him alongside Eric Bailly. However, Benfica are determined to strike a new deal with the player to hike up the reported £25 million release clause in his current contract. Even so, it shouldn’t be enough to act as a deterrent to City.

It may seem bizarre for City to spend heavily on yet another defender given they have spent so much on centre-backs over the past few seasons but with Vincent Kompany’s injury status a little blurred and Eliaquim Mangala out on loan, the team aren’t blessed with in this area of the pitch and makeshift defender Aleksander Kolarov has his limitations there. If they want to mount a title challenge they can’t have weaknesses in key areas. 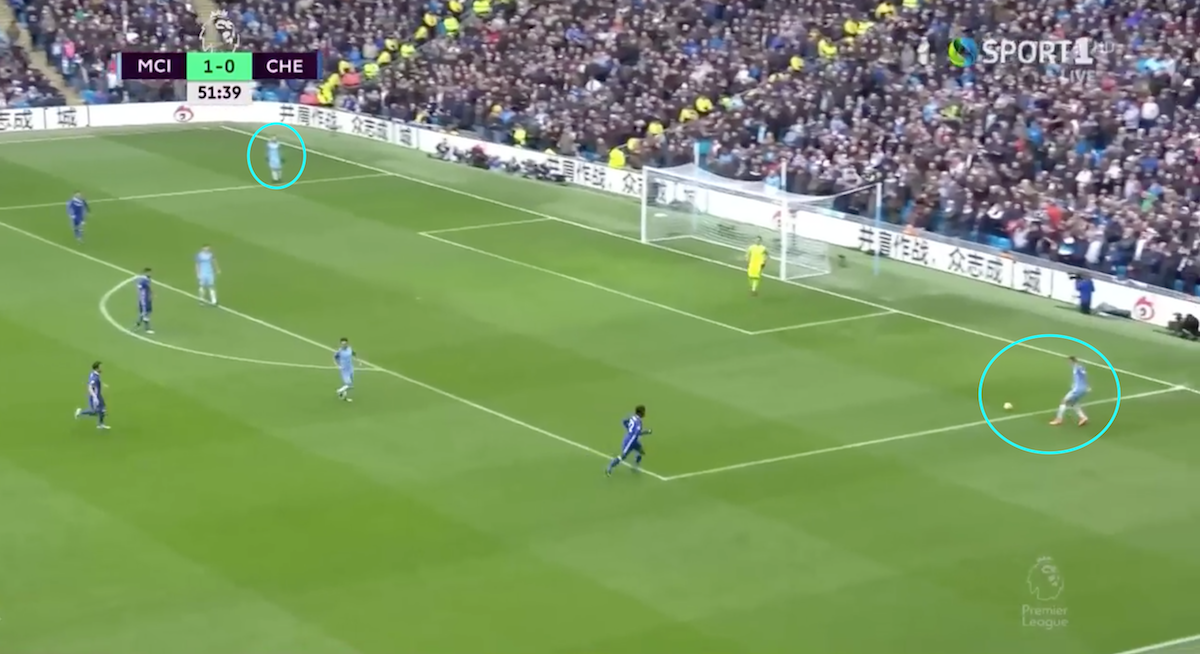 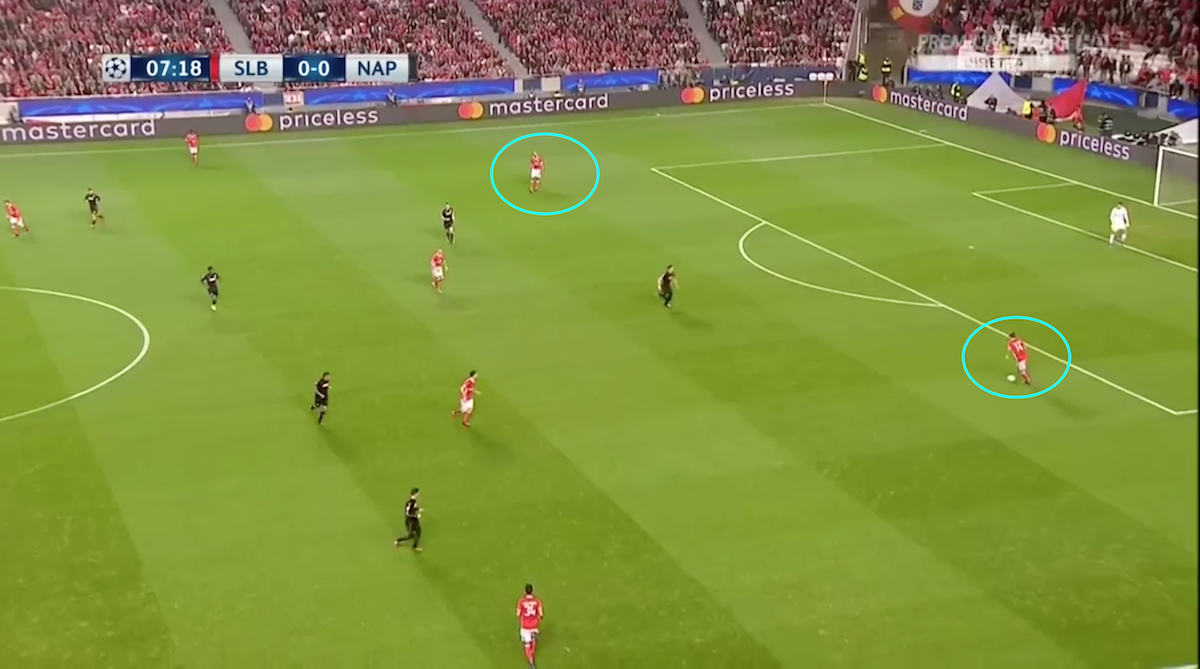 As you can see from the two above pictures both Benfica and Manchester City look to split the centre-backs and play out from the back. Of course like with many things Pep related, the City variation of this is a little more extreme but it’s not something that should test the Swedish centre-back. 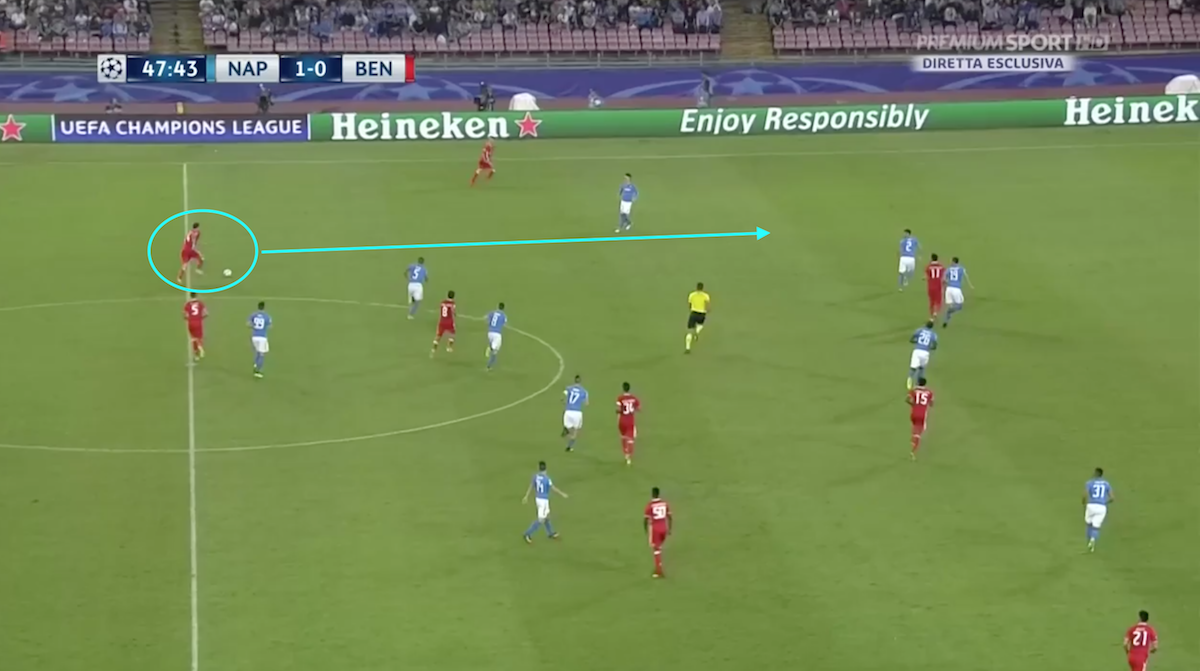 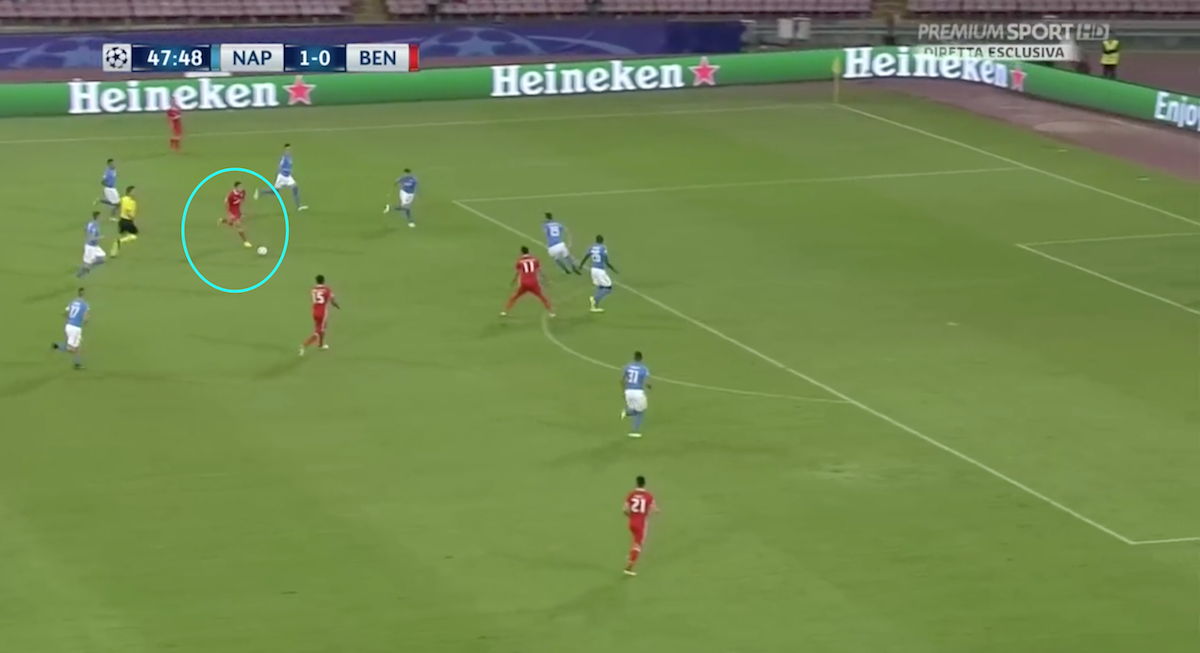 In the above two pictures you get to see Lindelof’s confidence and ability on the ball. He picks the ball up in his own half and instead of playing a simple pass to the Benfica left-back he takes it upon himself to drive into space and ends up working his way into the position shown in picture two. The centre-back ends up shooting when he probably should have passed, but the acceleration to skip past the Napoli midfield and the confidence he had to do so are both transferable traits that a Pep would welcome in a centre-back. 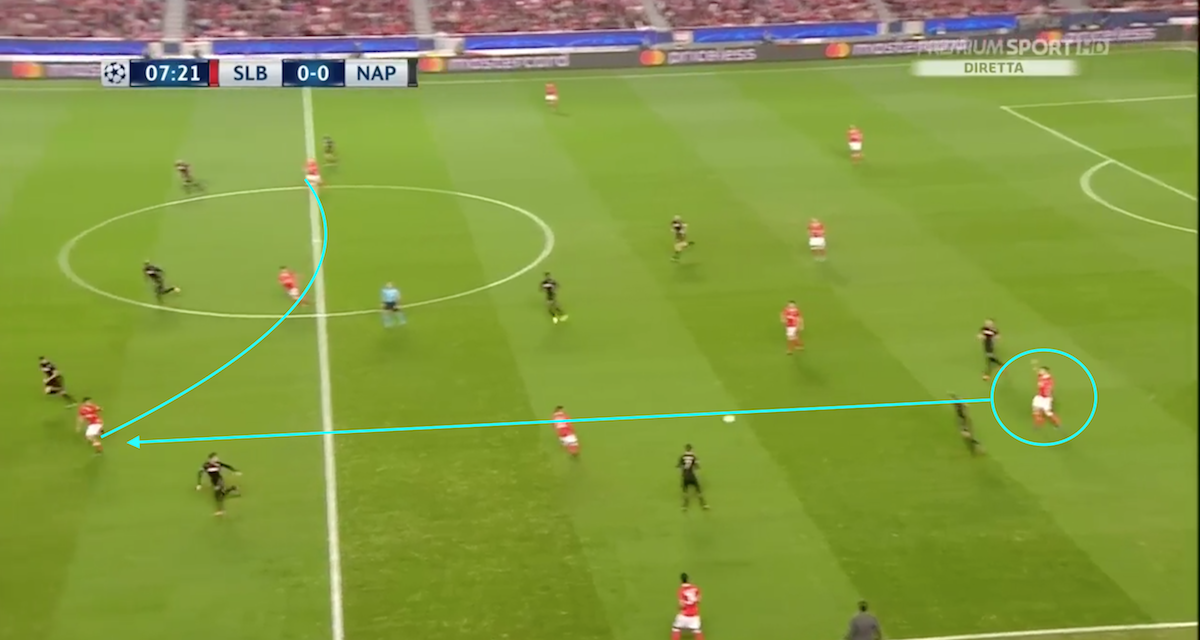 In the above picture you see Lindelof’s vision and execution of a pass. He plays the ball forward from defence and into the feet of the Benfica player. All it takes is a single pass from the Swede to take the Napoli press out of the game and in turn gets the defence facing their own goal and running backwards. Many teams in the Premier League press high and having this weapon from your centre-back would be effective.

In terms of stats so far this season, Lindelof averages 0.9 tackles and 1.6 interceptions and the opposition dribble past him 0.3 times per 90 minutes. Lindelof sees a lot of the ball at Benfica and attempts 63.9 passes with a 89.3% success rate. Compare this to the two centre-backs he’d most likely take the place of and it’s interesting reading.

Aleksander Kolarov makes 1.5 tackles and 1.5 interceptions and is dribbled past 0.8 times per 90 minutes. The former Lazio man attempts 61.2 passes and has a 81.7% pass success rate. Nicolas Otamendi, the natural centre-back, averages 2.8 tackles and 3.3 interceptions but is dribbled past 1.1 times per 90 minutes. Of the 62 passes he attempts he successfully completes 85% of them. 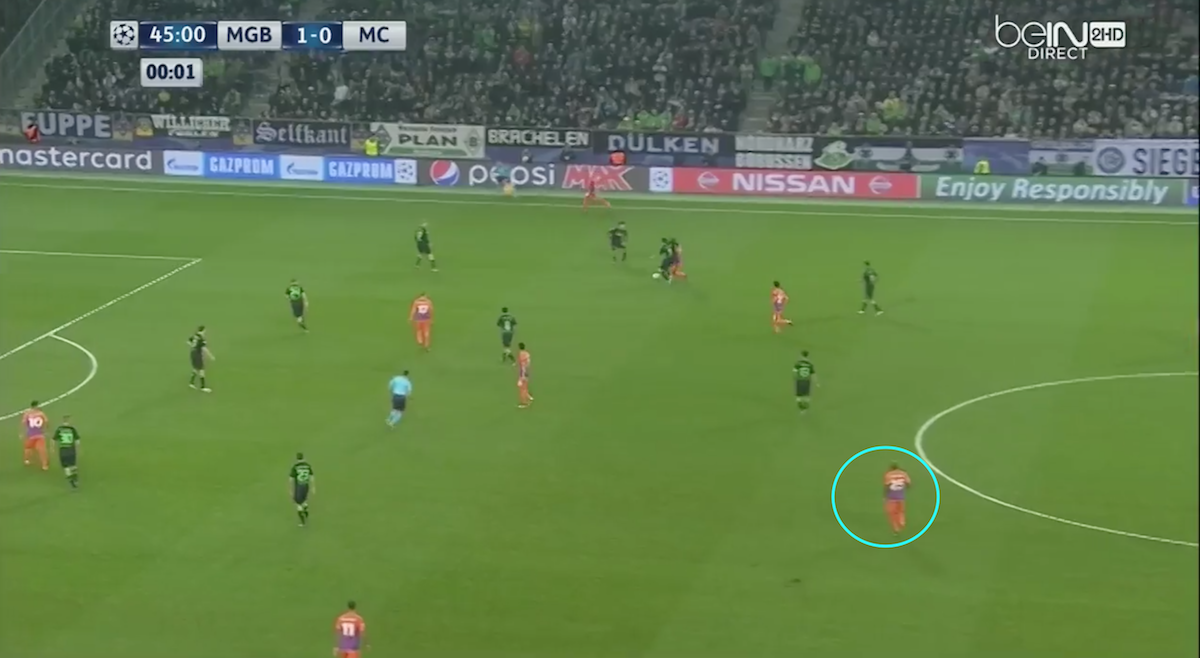 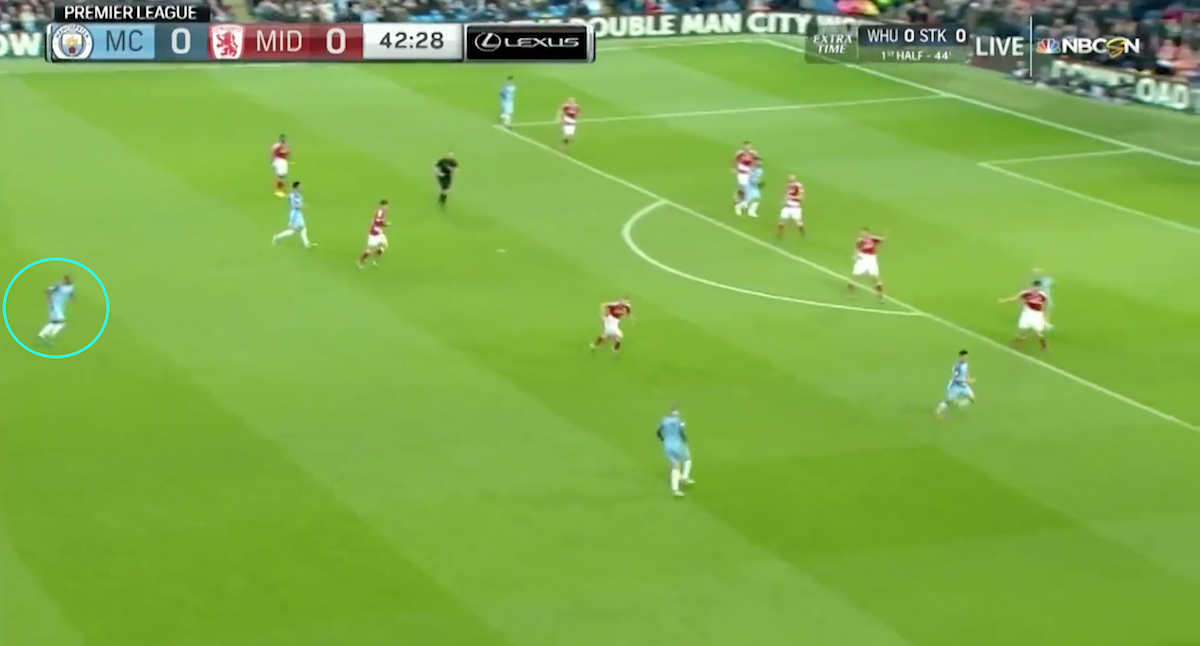 Pep’s tried the likes of David Silva and Kevin De Bruyne in midfield and Fernandinho has featured in all of City’s Premier League matches so far this season and has been somewhat of a balancing counter weight to the creative, attacking duo alongside him. When the rest of the team attacked he’s usually holding his position and fill in as and when. So far this season the Brazilian has averaged 2.3 tackles, 2.1 interceptions and has been dribbled past 1.9 times per 90 minutes. He attempts 71.5 passes and completes 86.1% of them.

No Manchester City player attempts, on average, more passes than Fernandinho, but the 32-year-old only has six months remaining on his deal and even if City do offer him a new one he’s not a long-term solution there. This is where Julian Weigl comes in.

The 21-year-old's rise to prominence has been remarkable. Plucked from Bundesliga.2 side TSV 1860 Munich for a reported £1 million, Thomas Tuchel made him a key cog in his new look Dortmund side which was much more possession based than they were under the blitzkrieg approach of Jurgen Klopp.

Initially, the young German stepped in to fill in for the injured Ilkay Gundogan but then kept him on the bench when he returned with Tuchel planning for the long-term after Gundogan announced he would be leaving. Weigl is the metronome, he keeps things ticking over for BVB and it’s why it will take a reported £40 million to convince Dortmund to part ways with him. In the Bundesliga so far this season he has averaged 2.2 tackles and 1.6 interceptions, and he has been dribbled past 1.2 times. He attempts 81.9 passes and has a 91.6% pass success rate. He’s got so much depth to game though. 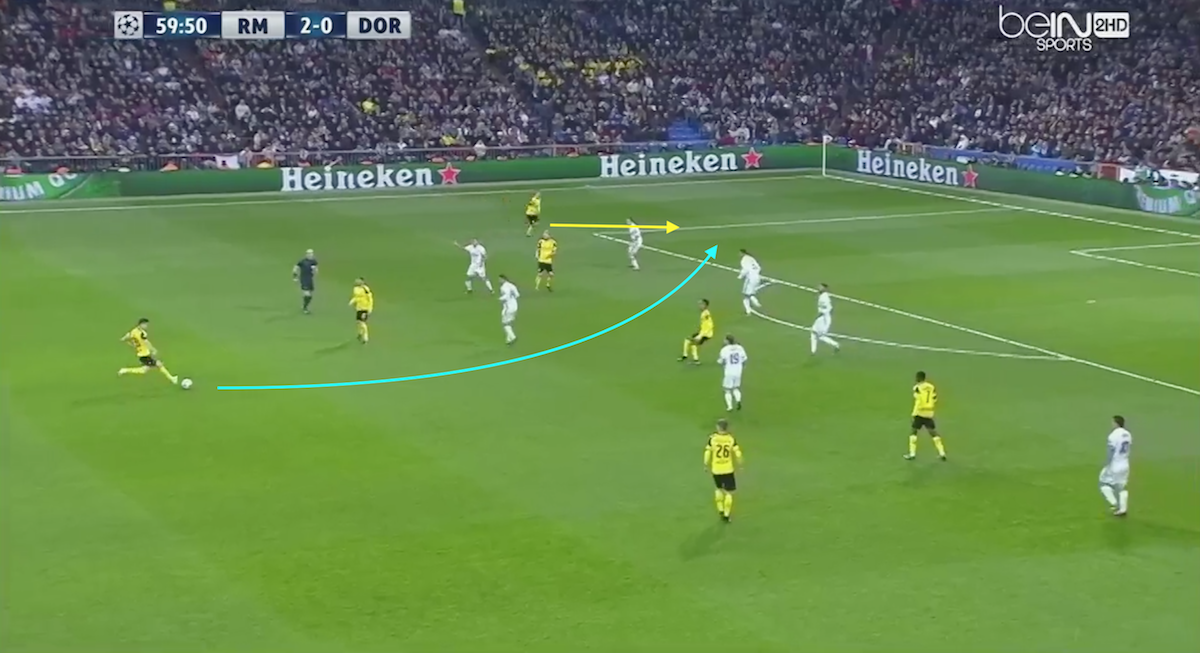 In the above picture Weigl showcases his vision and passing ability. There are simpler passing options on, but those options are all in front of the Madrid team, and they’d have seven players still behind the ball. The young German's pass get’s the Madrid defence facing their own goal and it’s effectively 3 vs 3. This phase of play results in Aubameyang tapping in. 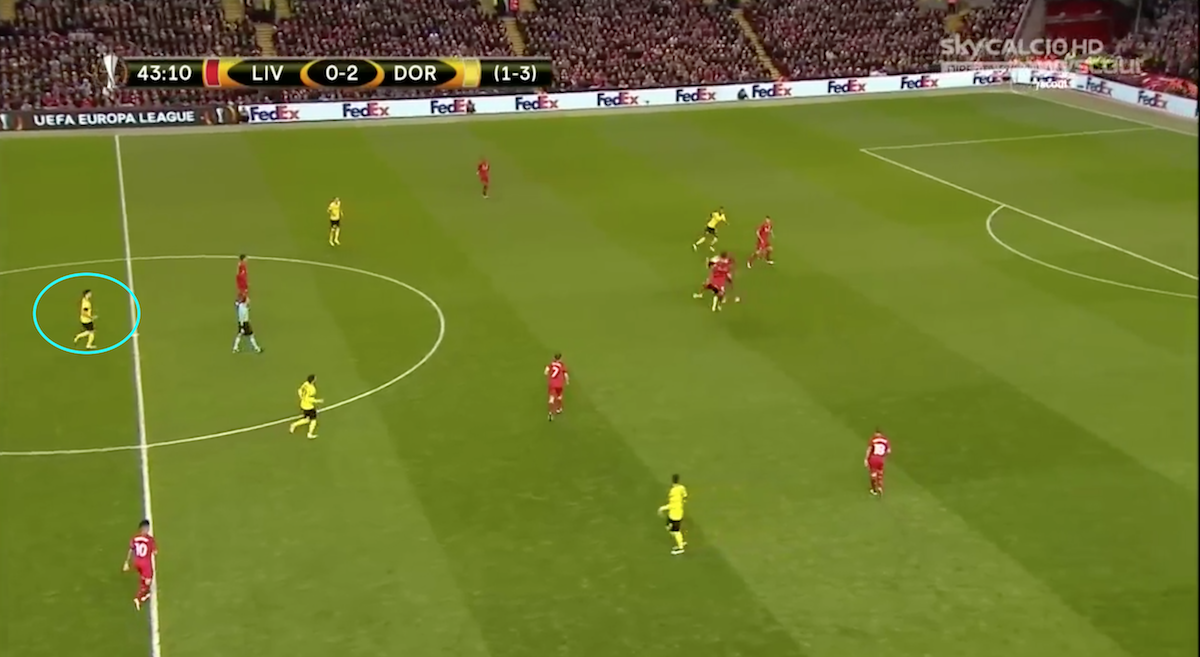 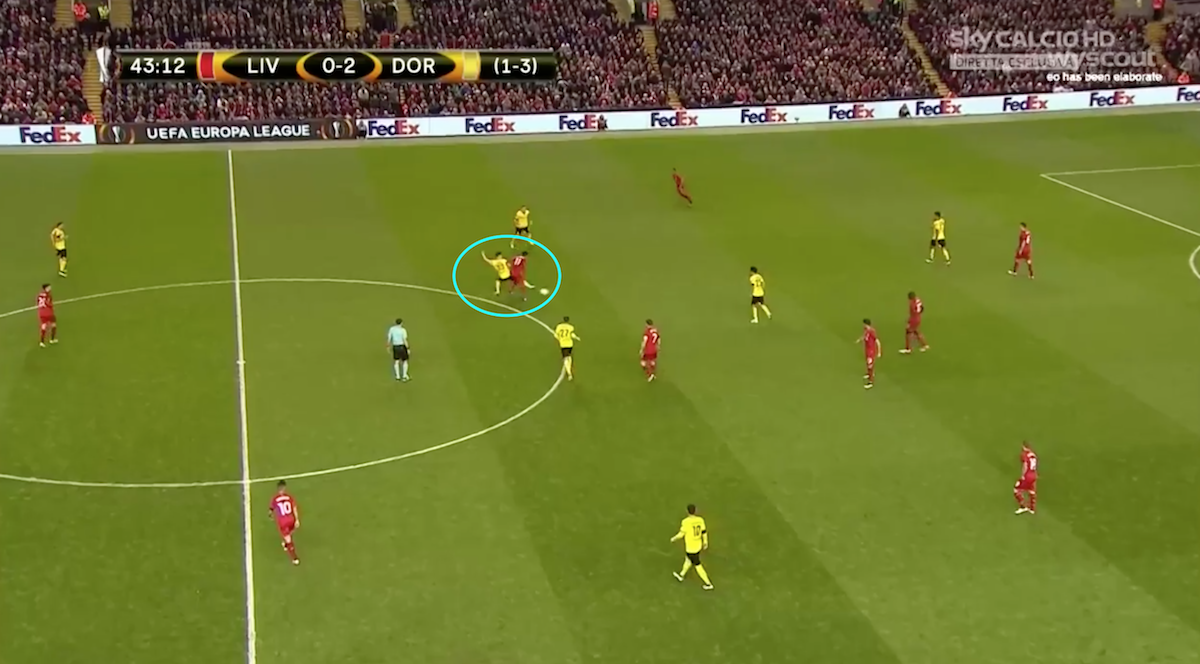 In the two pictures above, taken from Dortmund’s defeat at the hands of Liverpool, Weigl showcases his anticipation and reading of the game. Firmino is first onto the second ball but the midfielder makes up ground to not just stop the Brazilian from turning on the ball, but he actually kills the Liverpool attack dead, and gets Dortmund on the attack in the Liverpool half. He offers what Fernandinho does but then a little bit more too and his potential is scary.