The name. The number. The intelligent passes. The ability to glide beyond challenges. The decisive impact in matches. It's all so familiar, but then perhaps it runs in the family.

Many a young boy attempts to follow in the footsteps of their big brother – some want to go even further and exceed the achievements of their older sibling. But when your big brother is one of the world's finest footballers, escaping their large shadow can be difficult.

And yet that is exactly what Thorgan Hazard, younger brother of Chelsea star Eden, has achieved at Borussia Mönchengladbach. And it's why he is, according to The Sun, a Leicester City transfer target as the Foxes prepare to replace want-away star Riyad Mahrez.

What's more, there is even some speculation that Chelsea could be weighing up a Stamford Bridge return for the gifted attacker.

What asked about Premier League interest recently, Hazard told Sport/Foot: “England is appealing, but when you speak to players who play there, they also tell you that Germany seems like a great league.

“We have the best stadiums, the best infrastructures. The atmosphere is also ‘hotter’ than in England.

“Apparently a few clubs are interested, but we’ll analyse all that at the end of the season.”

Chelsea know full well what the middle Hazard brother is capable of. He was on the books at Stamford Bridge for three seasons between 2012 and 2015 but didn't make a single appearance for the club.

He became one of the club's loan army, having a two-year spell in Belgium with Zulte Waregem and then heading to the Bundesliga with Gladbach, who were so impressed by the attacking midfielder that they signed him permanently in January 2015.

Chelsea received an £8million fee but included a £13million buy-back clause. The Blues clearly knew the potential Hazard had, he just needed a platform to showcase it.

Gladbach gave him that and he's taken advantage. The 24-year-old has made 134 appearances for the German club and has netted 30 goals and registered 31 assists.

This season, however, his output his increased dramatically. Hazard has already notched seven Bundesliga goals and teed up four for his team-mates in 21 games. He is becoming increasingly decisive.

A different kind of Hazard

Given they play in the same position and have similar characteristics, the natural instinct is to look into how Thorgan compares with Chelsea's No.10. However, that would be unfair on the young sibling.

Firstly, Eden is two years Thorgan's senior. Secondly, he plays with better players. And thirdly, he is undoubtedly the most naturally gifted of the Hazard brothers.

But most importantly, Eden is fundamentally a different player to Thorgan. The former loves dribbling at opponents and will do so time and time again – it's why he averages 5.5 successful dribbles per 90 minutes this season in the Premier League.

The latter, however, uses the ball very differently. When he receives the ball, his first instinct isn't to drive at opposition defenders. He instead looks to play a pass, produce a cross or take a shot on goal, all of which he is very adept at doing.

Thorgan's game is, perhaps due to managerial instructions, more basic, but it is certainly effective. He is Gladbach's joint top scorer in the Bundesliga this season and no player has more assists.

Yes, he is the club's penalty taker, which should be taken into account. But if a player accepts the pressure of taking a spot kick then it shouldn't be counted as an asterisk against their goal tally.

In the below stills, Hazard's ability to read the game in attacking scenarios is clear.

Against Hamburg, Hazard started an attack wide on the right flank before drifting, almost subconsciously, into space. 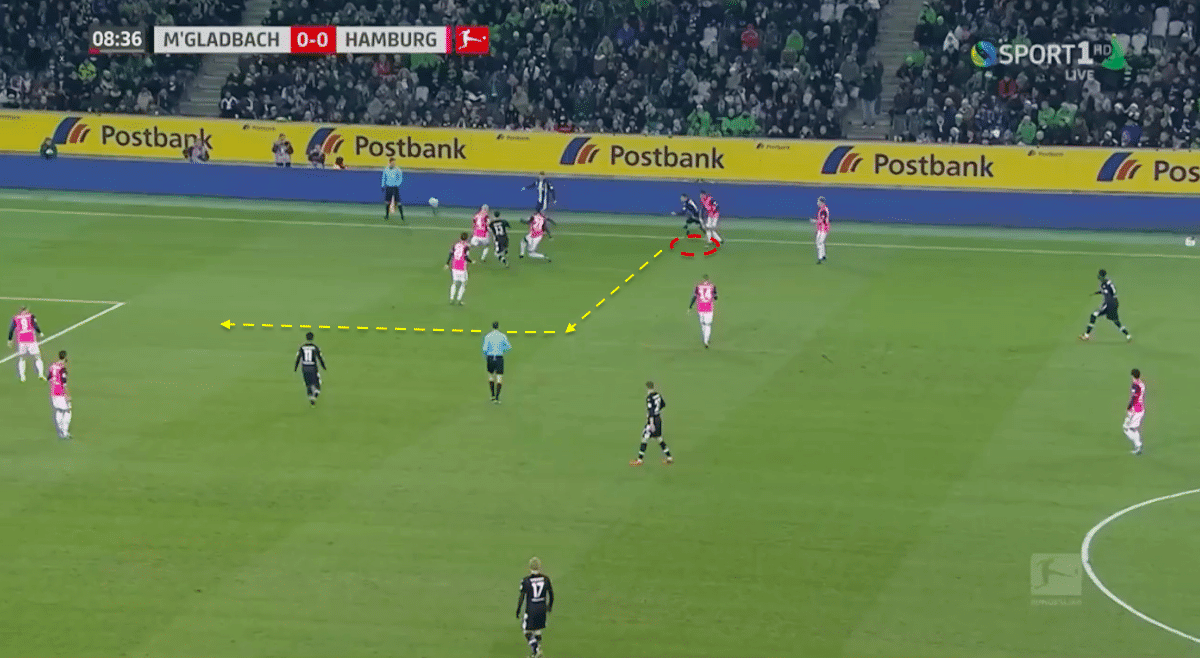 While the Gladbach attack evolves around him, Hazard is slowly drifting forward, but crucially is evaluating when to make his move and break into the penalty area.

As the ball is played to Lars Stindl, Hazard bursts forward and races beyond an admittedly poor Hamburg defence. 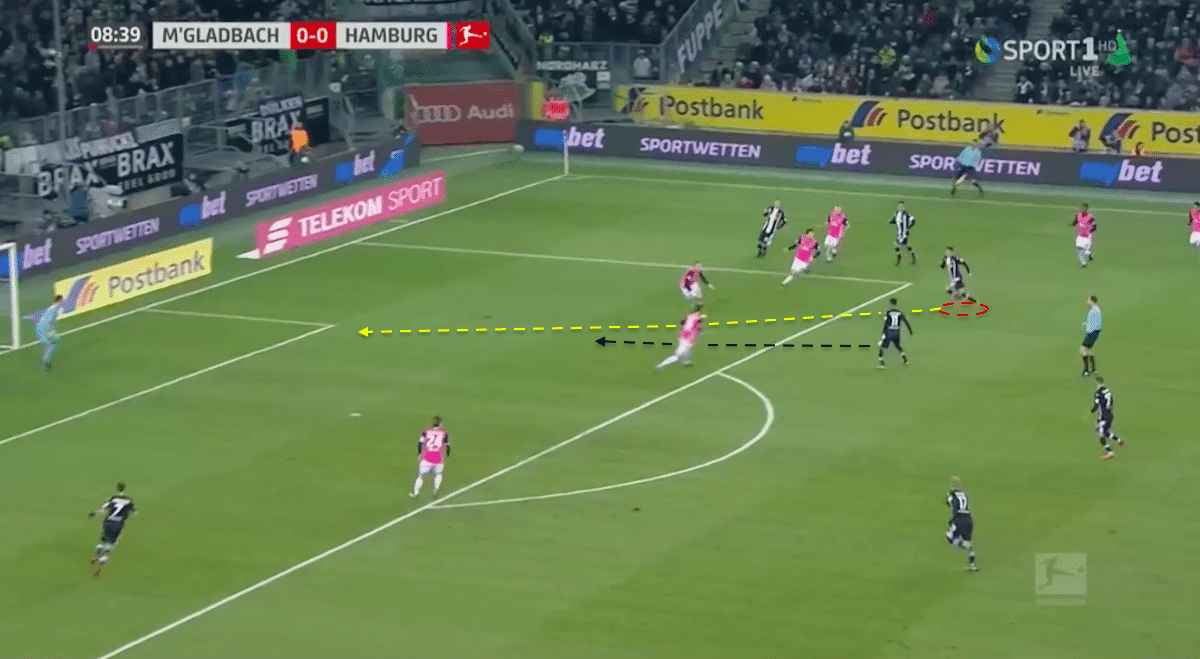 His first touch is excellent and his finish is one of confidence, finding the back of the net with the outside of his right foot. It was the opening goal of the game and set up Gladbach to complete a 3-1 win over their struggling visitors. 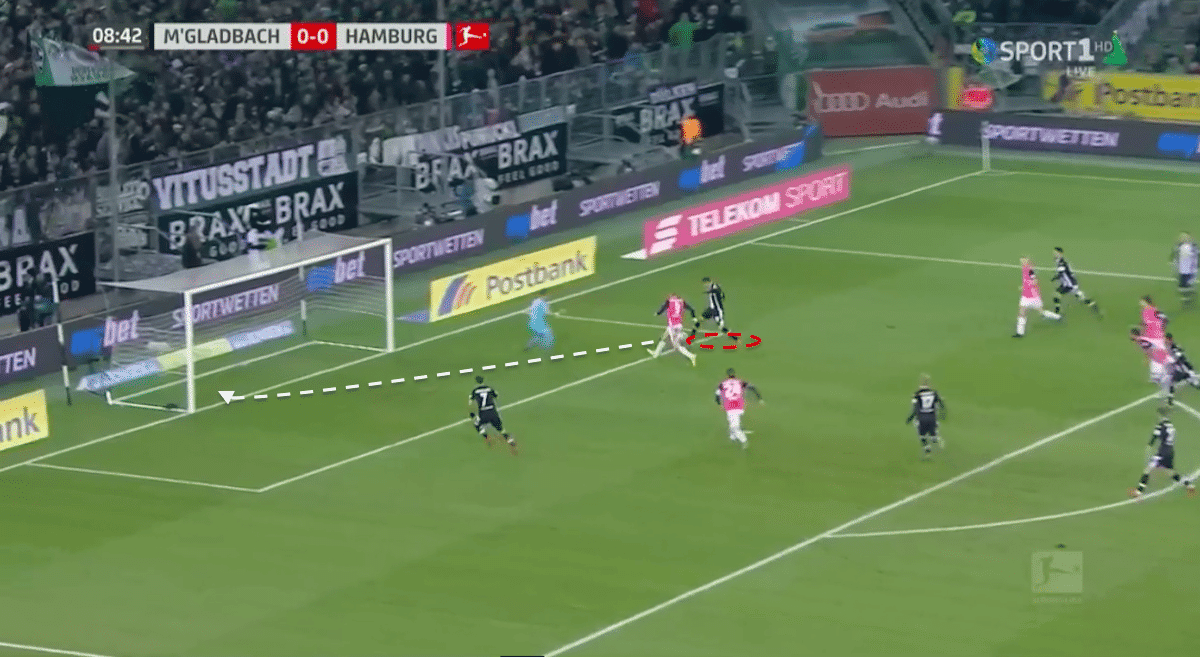 Hazard's desire to break beyond opposing defences is a regular occurrence. He has an injection of pace that allows him to escape defenders and find pockets of space in the penalty area.

The below stills, taken from Belgium's win against Gibraltar in World Cup qualifying, demonstrate Hazard's vision and ability to execute the picture in his mind. 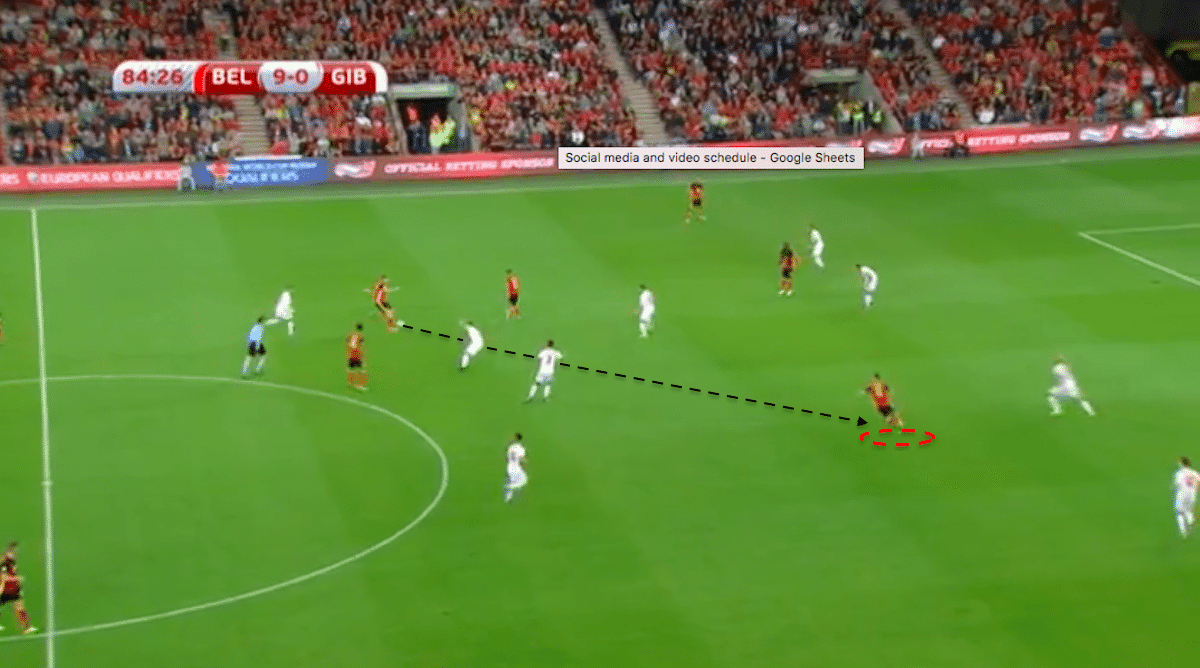 Once again, Hazard drifts into space in front of an opposition defence in order to collect the ball.

But while many players would turn as they take a touch, the Belgian has the confidence to knock the ball forward with the outside of his boot to striker Romelu Lukaku. 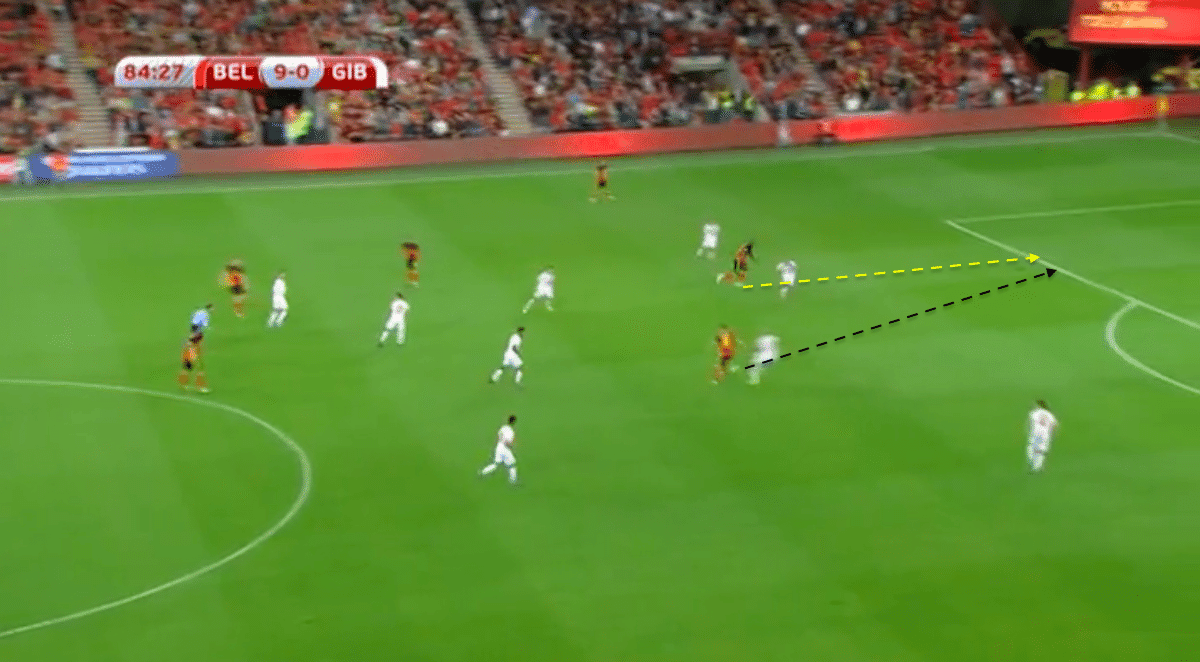 The pass is inch-perfect for the Manchester United striker who doesn't have to break stride before firing on goal.

Ultimately, it's a poor finish but it demonstrates Hazard's ability to unlock a deep defence with a single touch. 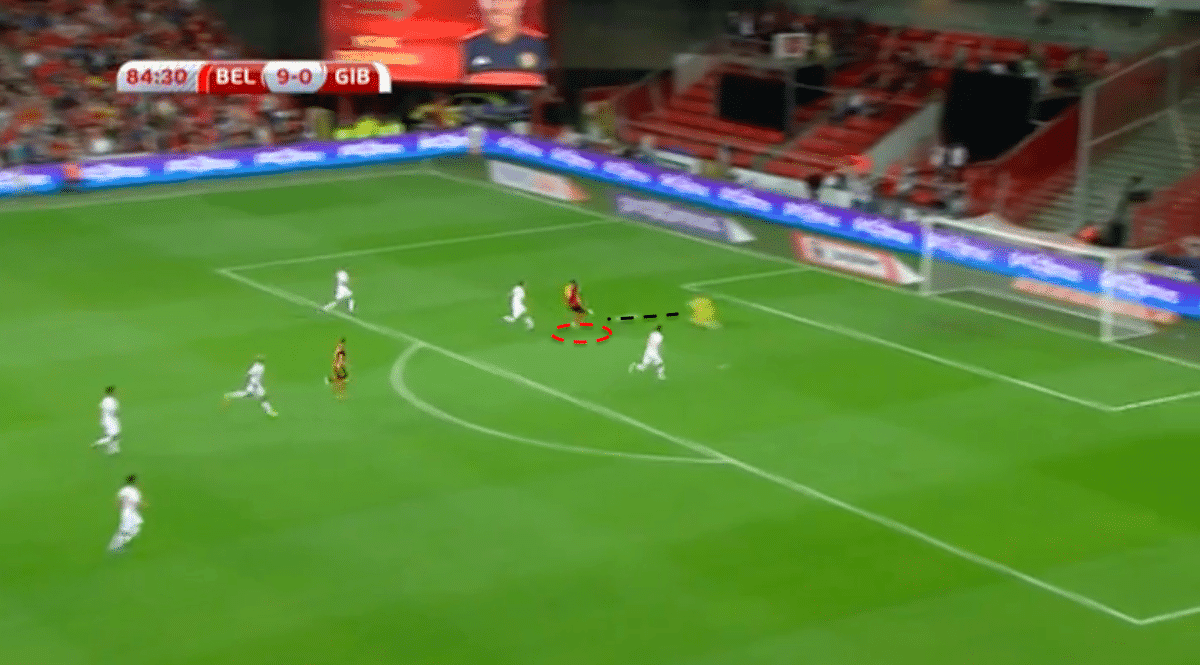 Given how transfer fees skyrocketed in the last few years, it's difficult to predict quite how much players will be valued atwhen the transfer window re-opens. However, it's safe to say Hazard wouldn't come cheap.

For a 24-year-old with the talent the attacking midfielder has, Gladbach could rightly demand over £30million for Hazard which would leave Leicester with a dilemma.

And if Mahrez finally leaves the King Power Stadium, that will only help drive the price up as Leicester will have a wad of cash to play with. Although the Foxes have spent big when required – dropping £25million on Kelechi Iheancho and £29million on Islam Slimani – they could be priced out of a move for Hazard.

But losing Mahrez will be a big blow and failure to replace him with like-for-like quality is a hazard they cannot fall foul of.

However, if Chelsea lose Eden Hazard to Real Madrid in the net future, as is being speculated they might, they could be temped to keep it in the family when it comes to fining a replacement.