With hindsight, it has become clear that Inter Milan failed to capitalise on their Champions League win in 2010. Since that victory, the club — traditionally one of the three big teams in Italy alongside Juventus and city rivals AC Milan — have failed to launch a concerted challenge for honours. After a second place finish and a trio of cup wins (Coppa Italia, Supercoppa and Club World Cup) in 2010-11, they fell swiftly to sixth, ninth, fifth, eighth and fourth-placed positions in Serie A. And their current position of 10th doesn’t offer much hope of a resurgence on the horizon.

Inter’s dramatic fall from grace could quite easily be attributed to a lack of stability in the dugout. Jose Mourinho led them to a remarkable treble in 2010 before leaving but, in the aftermath of the Portuguese’s departure, the club have appointed nine different head coaches. Rafa Benitez failed to build on Mourinho’s work and was replaced by Leonardo, who lasted less than one full season. Leonardo’s replacement, Gian Piero Gasperini, was sacked after just five games in charge.

Claudio Ranieri, Andrea Stramaccioni and Walter Mazzarri all failed to steady the ship before Roberto Mancini was brought back in late 2014, but Mancini couldn’t replicate the success of his first tenure. He left on 8 August but his successor, Frank de Boer, would be gone by 1 November after a terrible start to the season. Stefano Pioli then became Inter’s latest coach.

Pioli was given an 18-month contract that will see him through to the end of the 2017-18 season. The widely held belief is that this arrangement has been put in place to allow for a transition period before Diego Simeone, formerly a Nerazzurri player, takes over in the summer of 2018, when many expect his time with Atletico Madrid will come to an end.

But, even if Pioli does last until the summer of 2018, which would be an achievement in itself, in what state will he leave Inter?

There is no shortage of individual talent at his disposal thanks to the transfer market activity the club has embarked upon over the last couple of years. In Samir Handanovic and Mauro Icardi, Inter have arguably the finest goalkeeper in Italy outside of Gianluigi Buffon and one of the most clinical finishers in the world today. 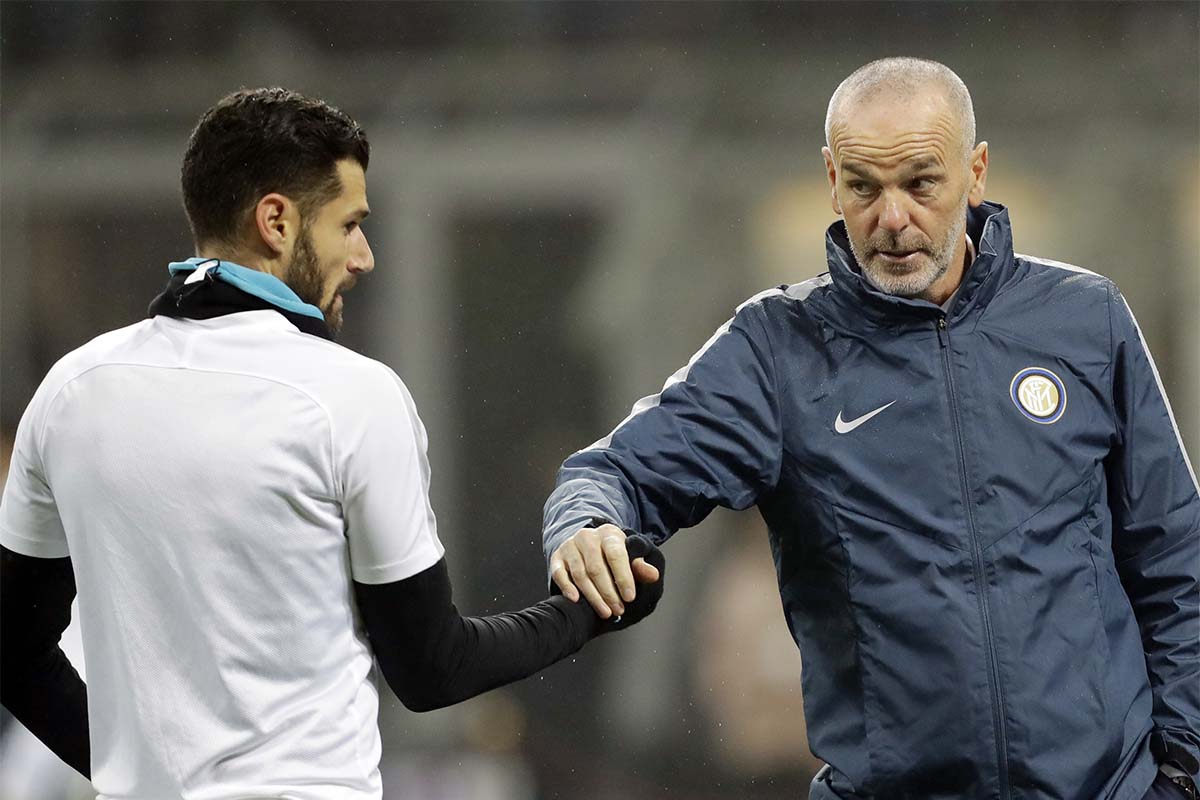 Defensively, Miranda brings solidity and experience to a back line that, with some organisation, could be difficult to break down. The Brazilian who previously played for Simeone’s Atletico is joined by Jeison Murillo, a combative centre-back in need of sound instruction, and Cristian Ansaldi, one of the best full-backs in Serie A last term with Genoa.

The midfield roster offers up all kinds of exciting possibilities. Versatile Chilean warrior Gary Medel is the safest defensive midfield option, though ahead of him Pioli has a selection headache. Geoffrey Kondogbia is, on his day, a strong ball-winner and –carrier, Marcelo Brozovic is an excellent passer, Joao Mario is a fluid and dynamic attacking midfielder, and Ever Banega is a technically refined, creative playmaker. Meanwhile, out wide Antonio Candreva and Ivan Perisic bring incisive dribbling, accurate crossing as well as an element of audacity.

Icardi’s main competition for the striking role comes from Eder, a flexible attacker at his best when playing either behind the front man or out wide. His pace, work rate and energy bring something different to the front line and, while he has yet to thrive at Inter, his scoring rate for Sampdoria was impressive. And while Gabriel Barbosa, otherwise known as Gabigol, remains an unknown quantity to Italian football having played just 16 minutes of action since joining the club in August, he is seen as possessing great promise.

Beyond the established first-team players, Pioli also has a wealth of young talent to work with. Twenty-year-old Assane Gnoukouri made his first start for the club in a Milan Derby in 2014-15 and didn’t look out of place. He hasn’t been afforded many opportunities since, but his composure and technique hint at a special prospect. More recently, 19-year-old Senna Miangue has shown himself to be a capable and attack-minded left-back, while 20-year-old Eloge Yao proved to be a solid and intelligent defender on loan at Crotone last term.

Pioli’s primary task is to build a cohesive team out of these individual components, something de Boer and Mancini before him were unable to do. The former was supposedly derailed by communicative issues, while the latter destroyed his own chances with an overly pragmatic approach to team selection.

In his first three league matches, Pioli has settled on a rough 4-2-3-1 shape, but the performances have been generally unremarkable and, at times, worrying. His coaching debut came in the Derby della Madonnina and saw a strong team showing. An aggressive defensive approach built on high pressing saw Inter cause Milan problems on route to a 2-2 draw in a game they could easily have won. 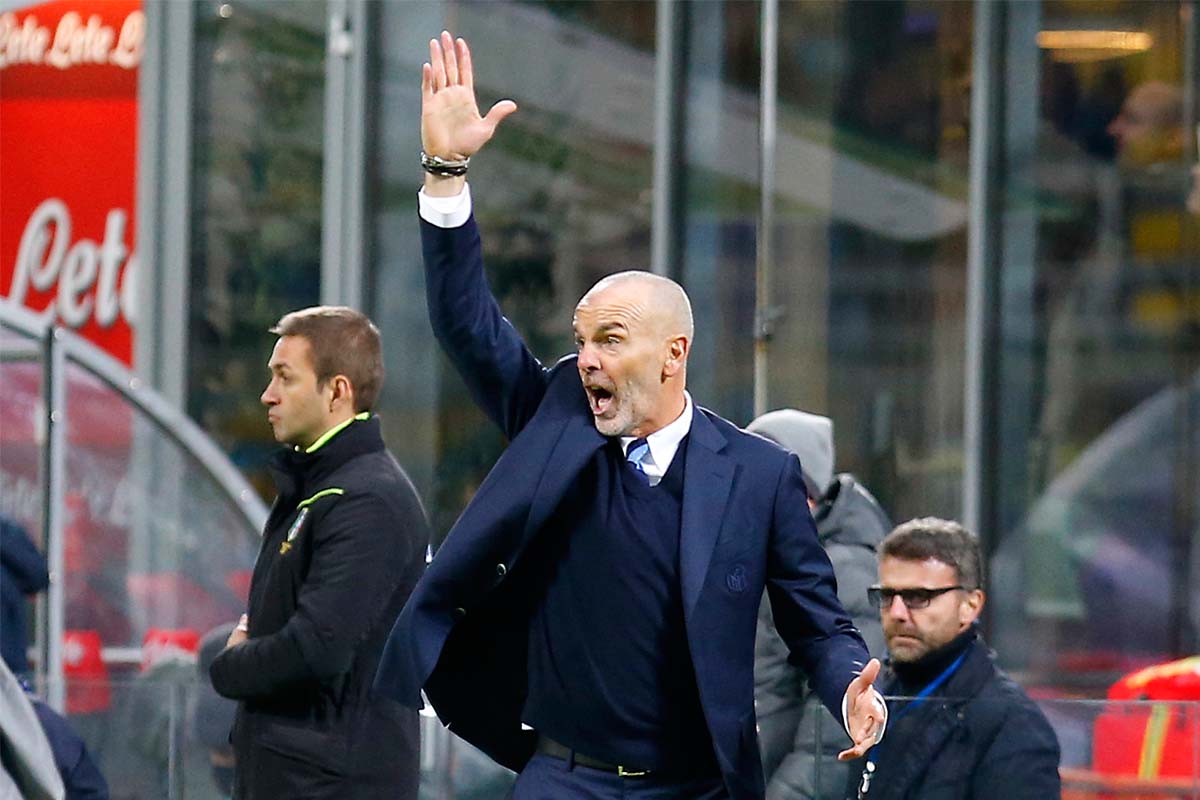 Pioli’s second league match in charge saw Inter go 3-0 up early on against Fiorentina but they were second best throughout the match and struggled even as their visitors went down to 10 men, eventually winning 4-2 after a fightback from the Viola. And, in their most recent fixture, Inter were comfortably outclassed, losing 3-0 to a Napoli side who have struggled for consistency so far this term.

While his appointment was uninspiring, it would be wrong to cast Pioli as a mere stop-gap out of his depth. He worked wonders in his first season with Lazio, taking the club to third place and the Champions League qualifiers as well as a Coppa Italia final in 2014-15. His Lazio side were tactically versatile, capable of operating in a number of different systems, and often exciting to watch.

So far, there has been little by which to judge Pioli at Inter. The draw with Milan showed signs of the traditional ‘new manager bounce’, before the more recent performances suggest a rapid return to reality. But, over time, he could be the combination of passion and proactivity that this Inter side have needed badly for a number of years.