As Manchester United and Tottenham Hotspur prepare to face off at Wembley for a place in the FA Cup final, both sides will be hoping to draw inspiration from Premier League fixtures against each other from earlier in the campaign.

United produced an authoritative display at Old Trafford in October to see off Spurs thanks to a single Anthony Martial goal, and Mauricio Pochettino's men thornily outclassed their visitors to the national stadium in January, winning 2-0.

Although the Red Devils are nominally the home team for Saturday's FA Cup encounter, Tottenham's temporary Wembley residence gives them a greater familiarity with the venue, and the two sides' last meeting there perhaps gives a strong indication as to how this semi-final will be contested.

Going into the game, United had lost just once in their last 11 outings and were riding a five-game winning streak. But Spurs played the 20-time champions off the park, striking in the first minute thanks to a well-worked kick-off routine rounded off by Christian Eriksen, with a Phil Jones own goal sealing the deal.

Aside from a short spell after the shock opener in which United looked to fight for a foothold, Tottenham were comfortable, and it all came down to the way they were able to dominate midfield.

Two weeks prior to his stellar performance in the first leg of Tottenham's Champions League last-16 tie with Juventus, Mousa Dembélé shone, outmuscling and outrunning opposite number Paul Pogba.

With 89 touches, only right-back Kieran Trippier (97 touches) saw more of the ball than the Belgian, who also completed an incredible 94.8 per cent of his passes, made three tackles, two interceptions, two take-ons and three key passes – it was the complete, all-round midfield display.

Dembélé wasn't acting alone, though. Eriksen, in addition to scoring the game's opening goal, accumulated the same amount of touches as the former Fulham midfielder, as well as creating six chances for colleagues.

And the Dane did so from more of a central remit than he is used to. As the below average position map, courtesy of Whoscored.com, shows, from their customary 4-2-3-1 formation, Tottenham drew their midfielders all in close to compact the central zone, relying on full-backs Tripper and Ben Davies to provide width. 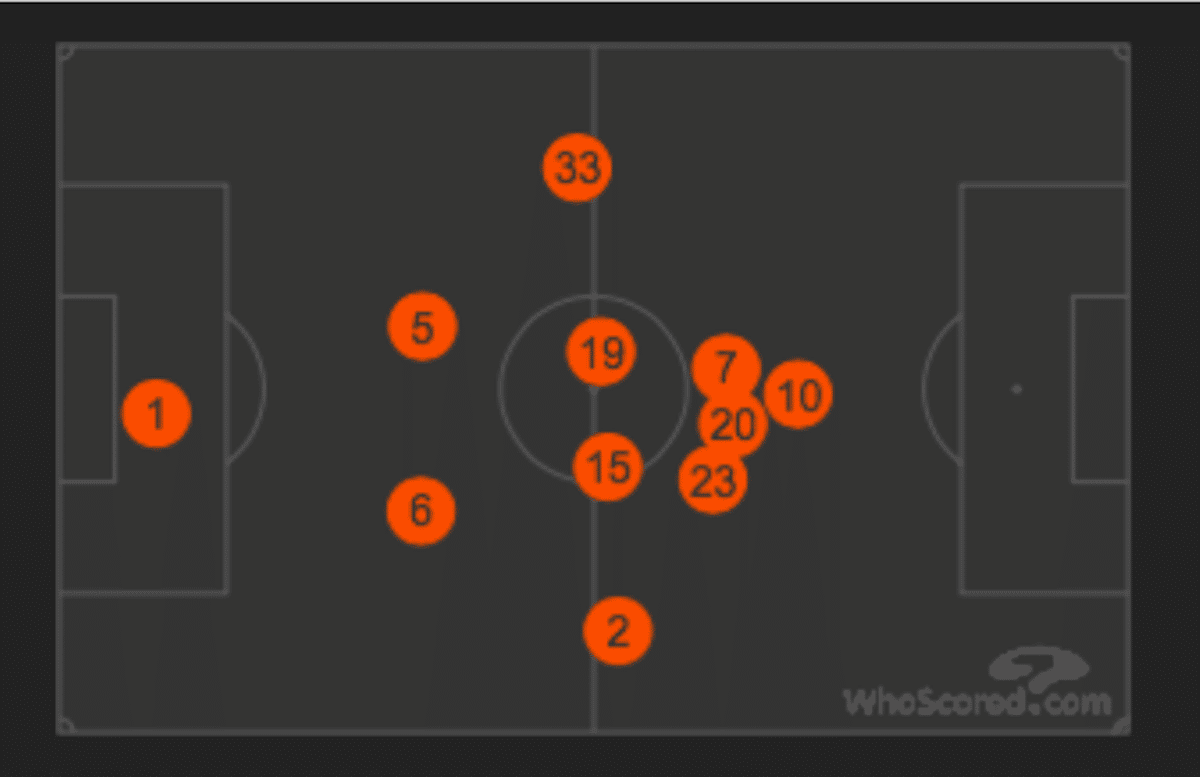 As a consequence, United's double-pivot of Pogba and Nemanja Matić were exposed and overwhelmed, with Spurs constantly cutting through the Red Devils' soft centre.

Mourinho was clearly dissatisfied with tactical discipline Pogba demonstrated, and hauled the Frenchman off after just 63 minutes in an effort of shore up that area of his team.

Although his performance statistics – 84 per cent pass completion with two tackles and an interception – don't indicate a drastic underperformance from Pogba, his positioning was an issue.

The 25-year-old playmaker, who has never been suited to a role in a deep midfield two, especially against high-quality opposition, wandered too far forward too often. This left Matić alone to cover the back four, which proved too tough a task for the Serbian. 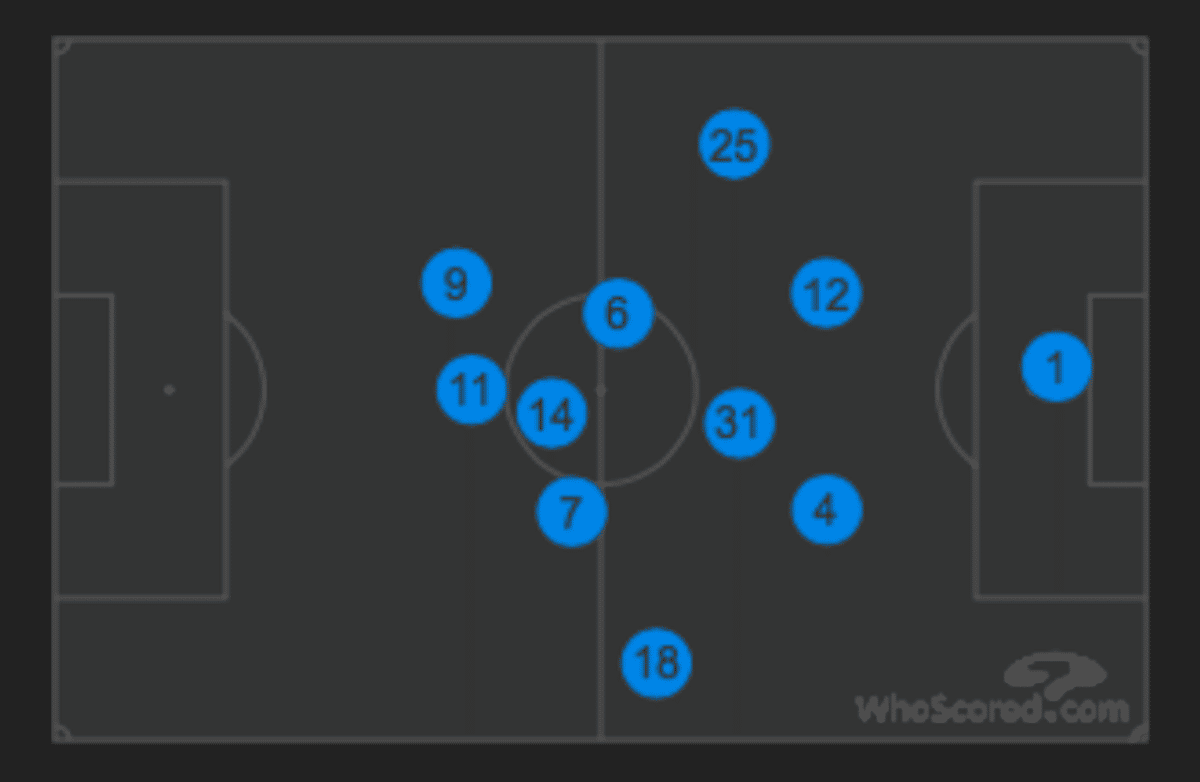 United's average position map for the game shows how Pogba (6), pushed high, effectively hanging Matić (31) out to dry as the Tottenham midfield swarmed.

This is what Mourinho must remedy ahead of Saturday's clash. The former Chelsea and Real Madrid boss has recently moved away from his favoured 4-2-3-1 shape in favour of 4-3-3, allowing Pogba to play in his preferred role on the left of a midfield three.

This also means Matić benefits from the added help of a third man in the middle, with Ander Herrera the most likely to start at Wembley. This term, the Basque midfielder has struggled to replicate the form that made him United's Player of the Year for last season, but his tenacity, comfort in possession and ball-winning ability could be key to disrupting Tottenham's rhythm.

Pochettino's elastic midfield, contracting to limit space without the ball and spreading out to open up the pitch when possession is won, gives Tottenham the flexibility to switch between stifling and dominating approaches, so no change of shape is needed.

The key to this semi-final all centres around how much United and Mourinho have learned from their Wembley defeat in January. Their comfortable 2-0 victory over Bournemouth at the Vitality Stadium on Wednesday night should see confidence restored after a shocking defeat to West Bromwich Albion last weekend, with Paul Pogba looking back to his best and Martial and Marcus Rashford staking claims for inclusion against Spurs.

Manchester City's Premier League triumph means this is the first time in his managerial career Mourinho has failed to land a league title in his second season at a club, so he'll be desperate for FA Cup glory in order to put a positive spin on the campaign, while Pochettino will be intent on claiming his first silverware in order to eliminate the sole caveat that has followed him around to date.

Success for either manager will be determined by the battle for midfield supremacy. Can Mourinho correct his previous tactical errors, or will Pochettino's men run riot again?