“I think it is goodbye.”

Those aren’t the words you want to hear your star player mutter just moments after winning a major final. But that’s exactly what happened after Chelsea’s 4-1 triumph over Arsenal in Wednesday's Europa League showpiece.

Pressed for an answer by the interviewer, Eden Hazard eventually jumped off the fence to confirm his time at Stamford Bridge is almost certainly up. With Real Madrid lurking, it feels more a case of when and not if the Belgian finally gets his dream move.

It leaves Chelsea with a void to fill.  A void Christian Pulisic and Callum Hudson-Odoi can’t fill just yet, though in time they might be able to.

However, in the Premier League, you can’t stand still. With six teams vying for four Champions League spots, teams need to be perpetually improving. Maurizio Sarri and his recruitment team will have to replace Hazard.

According to respected Italian journalists Gianluca di Marzio, Chelsea have lined up a move for Barcelona‘s Philippe Coutinho – if they’re able to get their transfer ban overturned.

In many ways, it’s similar to when the Blues brought Cesc Fàbregas back to the Premier League. He went to Barcelona, labelled as an ideal player for the LaLiga side, but ultimately found it difficult to fit into the team.

Just because Coutinho has failed to really assert his authority in a team dominated by Lionel Messi doesn’t mean he isn’t a quality player. There’s a reason Barcelona agreed a deal worth up to £146million to lure him away from Liverpool in January 2018.

If he can rediscover the form he showed in the 18 months prior to his move to the Camp Nou then the Europa League winners would have one of the best players in the Premier League at their disposal. But that's a big if. 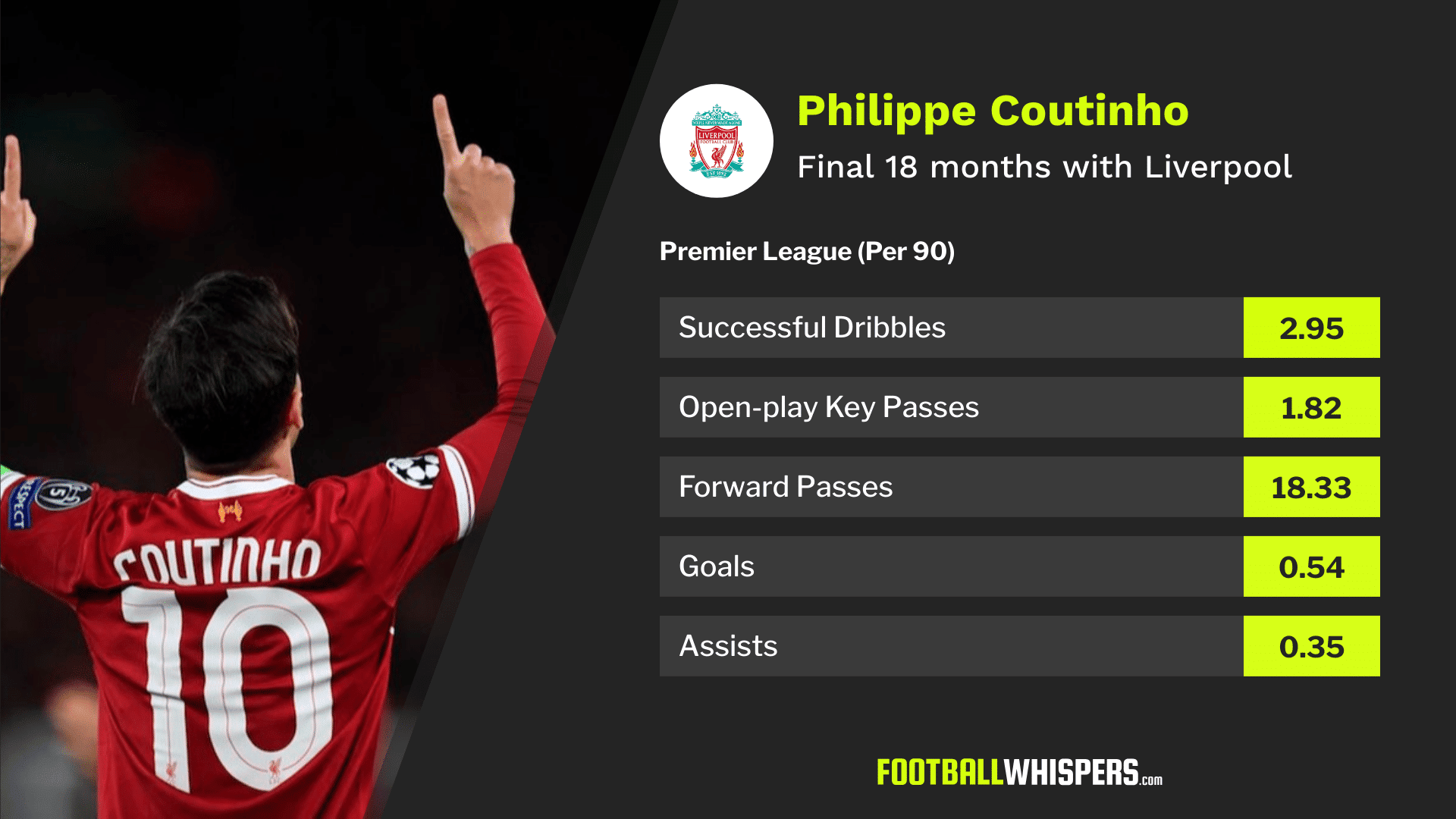 Used on the left of Liverpool's front three, Coutinho found his goalscoring groove with manager Jürgen Klopp adding consistency to his game the Brazilian maestro had previously lacked.

The long-distance shooting for which he was famed was replaced with greater refinement. The Liverpool No.10 still had those 25-yard curlers in his locker but he started to work the ball into the area before unleashing efforts goalwards. Coutinho's output spiked and in the six months prior to his move to LaLiga, he scored seven goals and assisted six more in just 1,116 minutes in the English top flight.

He’s having to tweak his natural game in Spain and, in turn, it’s having an impact on his performances. For a player who is so unpredictable when in possession, he makes things a lot more predictable for this Barcelona team.

Simply put, the Coutinho Barcelona courted for so long isn’t the Coutinho fans are now witnessing on a weekly basis.

But that doesn’t mean that version no longer exists, he just needs to be unleashed again.

There’s also the Messi factor. For Liverpool, the Brazilian would pick the ball up on the left and drift inside to influence proceedings. At Barcelona, he’d be getting in Messi’s way if he tried that.

But at Chelsea, with Hazard on the way out, he'd be the main man again. The creative hub. The difference-maker. A role he thrives in. 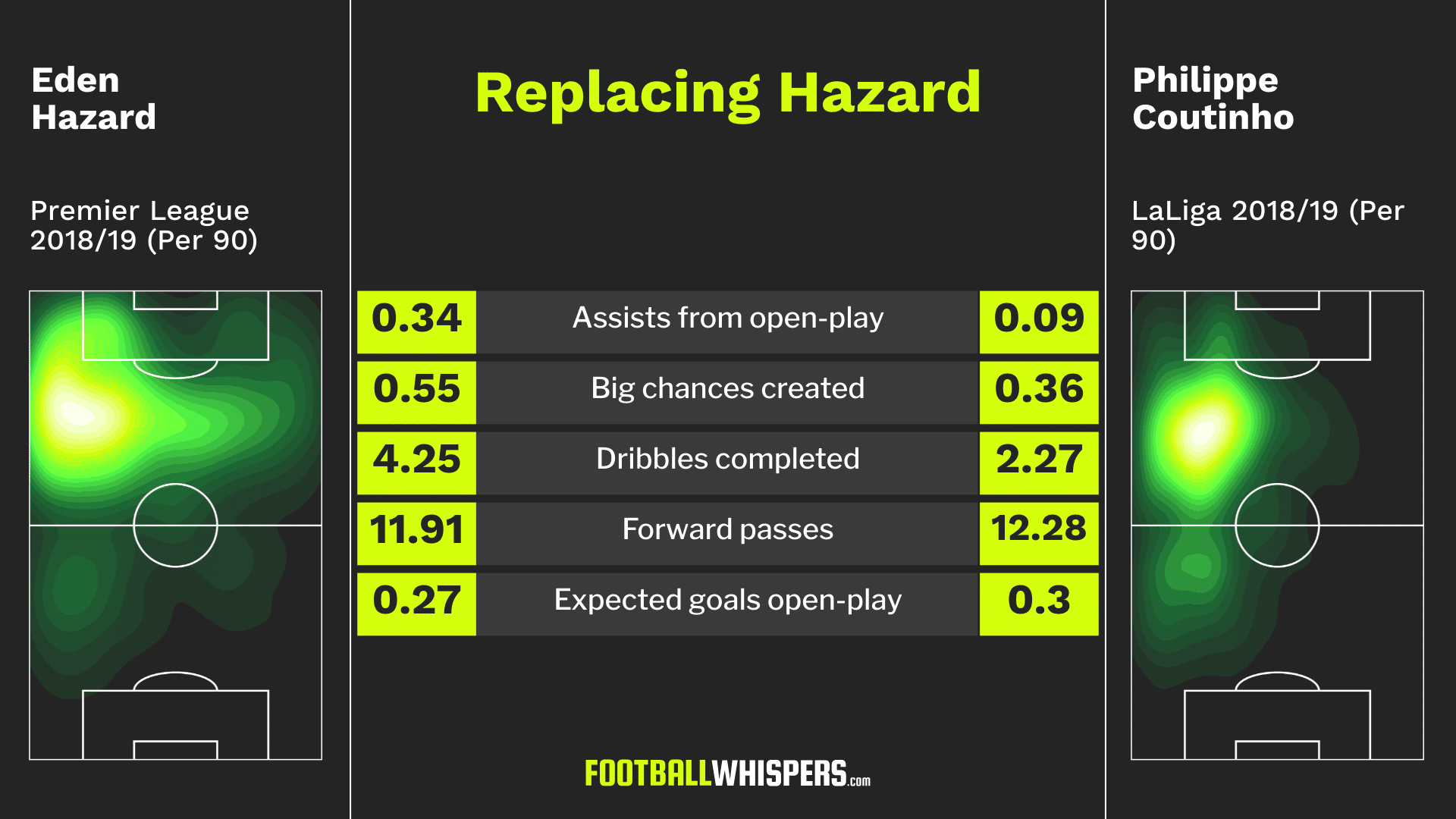 He'd not be a perfect replacement for Hazard. A player like that doesn't exist. But very few can make a claim of being capable of filling the role the Chelsea No.10 will be creating with his departure.

The slaloming runs. The ability to beat a man with a pass as well as a dribble. The vision and the ability to execute some of the more extreme passes between the lines. The goal threat and, perhaps most importantly, the reliability.

Goalscoring wide forwards are hard to come by. Hazard's return of 16 goals and 15 assists in the Premier League is utterly ridiculous. But during 2017/18, Coutinho scored league 21 goals and chipped in with 12 assists for Liverpool and Barcelona. And the Brazilian doesn't take penalties as regularly as the Belgian.

If Hazard does depart, Chelsea need a reliable option in the final third and Coutinho has that in him. The ability to carry the goalscoring burden.

It would be hard to describe as Coutinho as a bargain. Reports claim Barcelona would accept a bid in the region of £80million. Then he'd be just that. A bargain.

Context is necessary, of course. But in the current market, a player with an abundance of Premier League, Champions League and international experience – and one who still has time to improve despite being considered world class already – doesn't move for anything below the £100million. Hazard is reportedly leaving for north of that and has just one year left on his deal.

Coutinho is something of an afterthought these days. His fall from grace has been rapid. However, his return to the top table could be just as quick if he gets his next move right. Taking the role as Chelsea's leading man could go a long way in restoring his stock.