Just days after manager Rafael Benítez voiced his disappointment about the club's summer business so far, Newcastle United are closing in on Stoke City striker Joselu.

Sky Sports sources claim the German-born Spanish striker has completed a medical and agreed personal terms with Newcastle ahead of his £5million move to St James' Park.

The 27-year-old joined Stoke in the summer of 2015 in a deal worth £5.75m from Bundesliga side Hannover but scored just four goals in 27 appearances for Mark Hughes' team. He's the latest forward to be shown the door at the bet365 Stadium as the club look to revamp their attack.

The Chronicle revealed Newcastle had been working on deals for Joselu and Chelsea winger Kenedy for a number of days, and when asked about reinforcements after the 2-0 defeat to Spurs, Benítez said: “The situation is the same as we had before the game, so it doesn’t change too much. We knew what we needed and we know what we need.”

On Monday evening, there was a report in the Telegraph which claimed Benítez was hoping to add five new faces to his squad as he prepares for life in the Premier League.

The report went on to say a left-back, central defender, striker and goalkeeper are all positions that have been identified by Benítez. The club have seemingly acted quickly to appease their manager.

Joselu is not be a household name by any stretch of the imagination but if the former Real Madrid manager is happy with him then fans should be, too. Benítez has a knack for identifying strikers.

He got the best out of Mista at Valencia when he won the La Liga title in 2003/04. Fernando Torres developed into one of the most feared forwards in Europe under the watchful eye of Benítez while at Liverpool. Gonzalo Higuaín matured in the Spaniard's Napoli side.

He repeated the trick for his current club, too. When Newcastle opted to move for Dwight Gayle last summer it raised a few eyebrows but he fired the Magpies back to the Premier League with 23 goals in just 32 matches – comfortably his best return during his career.

If the 57-year-old manager is happy with Joselu leading the line then there's a reason to trust him.

Although it's difficult, it's best not to judge the 27-year-old striker on just his goal return. He's yet to hit double figures in a season but he's much more than goals.

Furthermore, there are signs that, if a team players to his strengths, he can be a goal threat and he has the ability to find the back of the net on a regular basis.

While on loan in La Liga with Deportivo last season he scored five goals in just the 892 minutes of action, notching an assist in the process. He scored in big games, netting three times against Real Madrid and once against Barcelona.

One of the goals against Los Blancos was a stunning left footed drive from just inside the penalty area which kissed the underside of the bar on the way in.

In those matches he never once looked like a player who would struggle to cement a starting position in a Stoke side.

Even though he reportedly struggled while playing under Hughes, he was still involved in a goal every 200 minutes when wearing the red and white of Stoke. It's far from a pitiful return.

As he showed when playing on loan at the Estadio Riazor, his clever movement makes him a goal threat and his physical presence means he should be the exact sort of striker Premier League defenders hate to come up against.

Indeed, five of his last ten goals while playing for Deportivo and Stoke have come from headers. Get the ball into the penalty area and there's always a chance of a goal with Joselu in your XI.

Standing at 6ft3ins, the forward puts his frame to good use but he's far removed from being a target man. His defensive work off of the ball is exceptional, he tracks back and puts himself about for the good of the team.

But it's his movement which makes him an interesting prospect. Many physical strikers tend to position themselves near the back post when the ball is worked into the penalty area, between centre-back and full-back in an attempt to peel away on the latter and nod home.

Joselu doesn't do this, though. He uses intelligent off-the-ball movement to get the better of some of the most imposing defenders in the world, as shown in the pictures below. 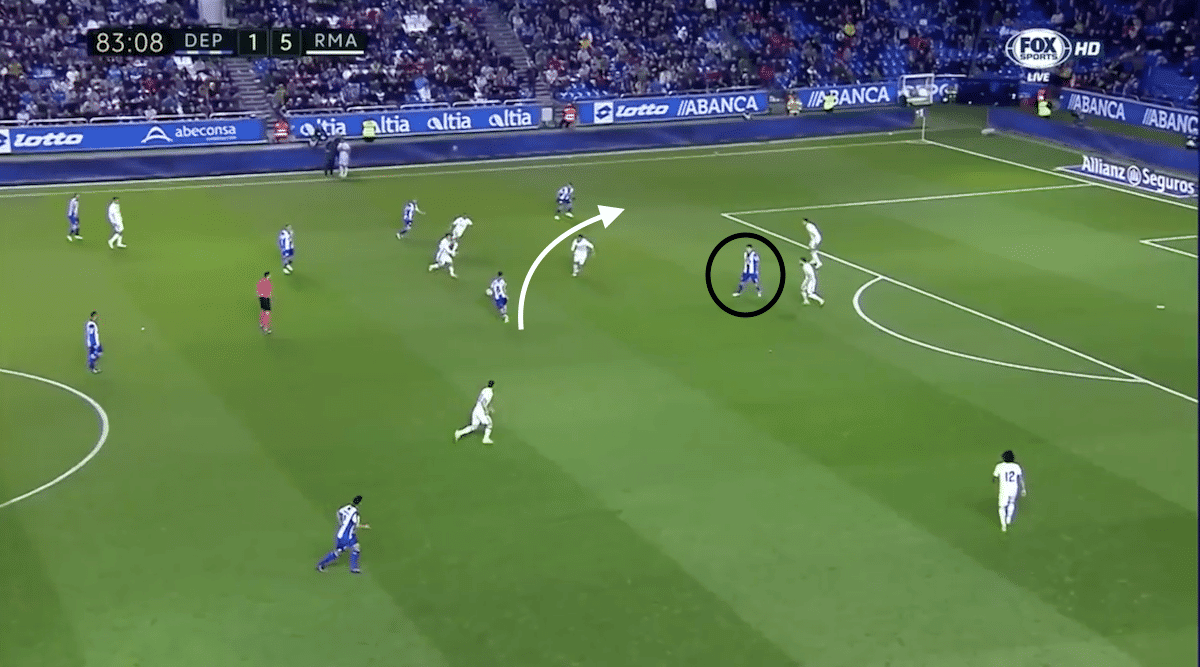 Joselu is circled in black taking up a central position. He drops deep to show for a pass but as soon as the ball is played out wide he's on his bike to get into the penalty area. 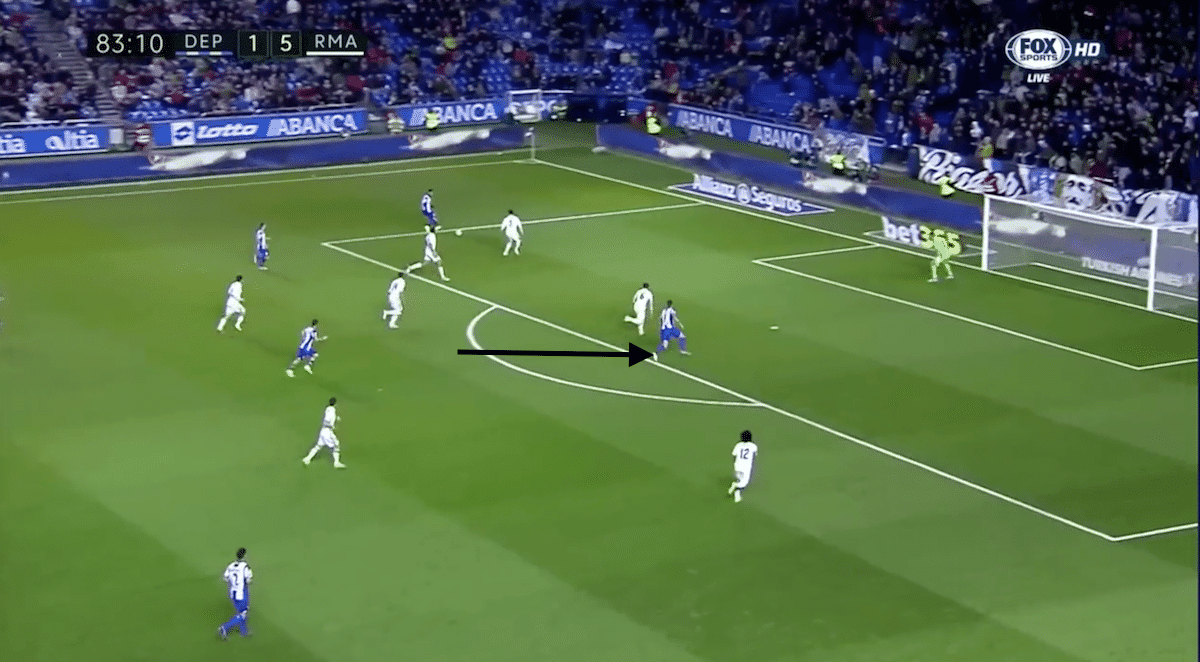 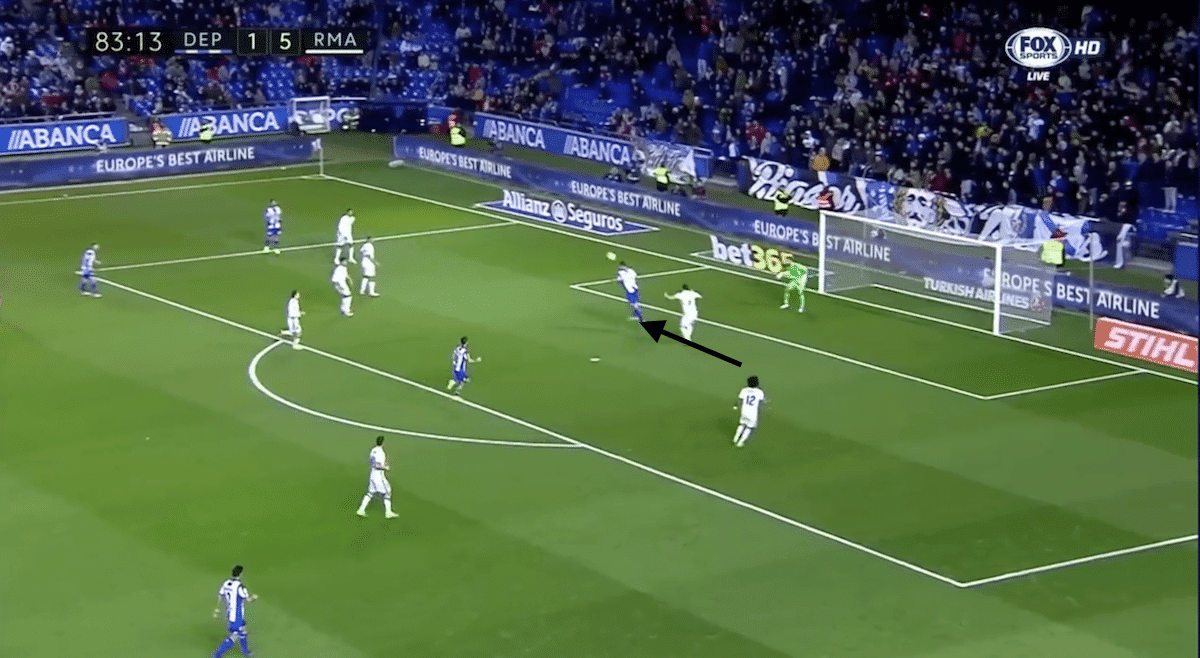 He makes a run to the back post initially before quickly changing direction and cutting across the centre-back to get on the end of the cross to nod home. It's not a goal to remember and it's not one for the record books. But it shows why he's a goal threat. It's the sort of goal which can be replicated time and time again. Clever movement finished off by a desire to beat the centre-back in the air.

Remind you of a certain Newcastle legend?

Joselu could well turn out to be yet another shrewd Benítez signing. He's definitely got the ability to surprise a few Premier League defenders this season.