According to reports in Italy, Arsenal have identified Alexis Sanchez’s replacement. 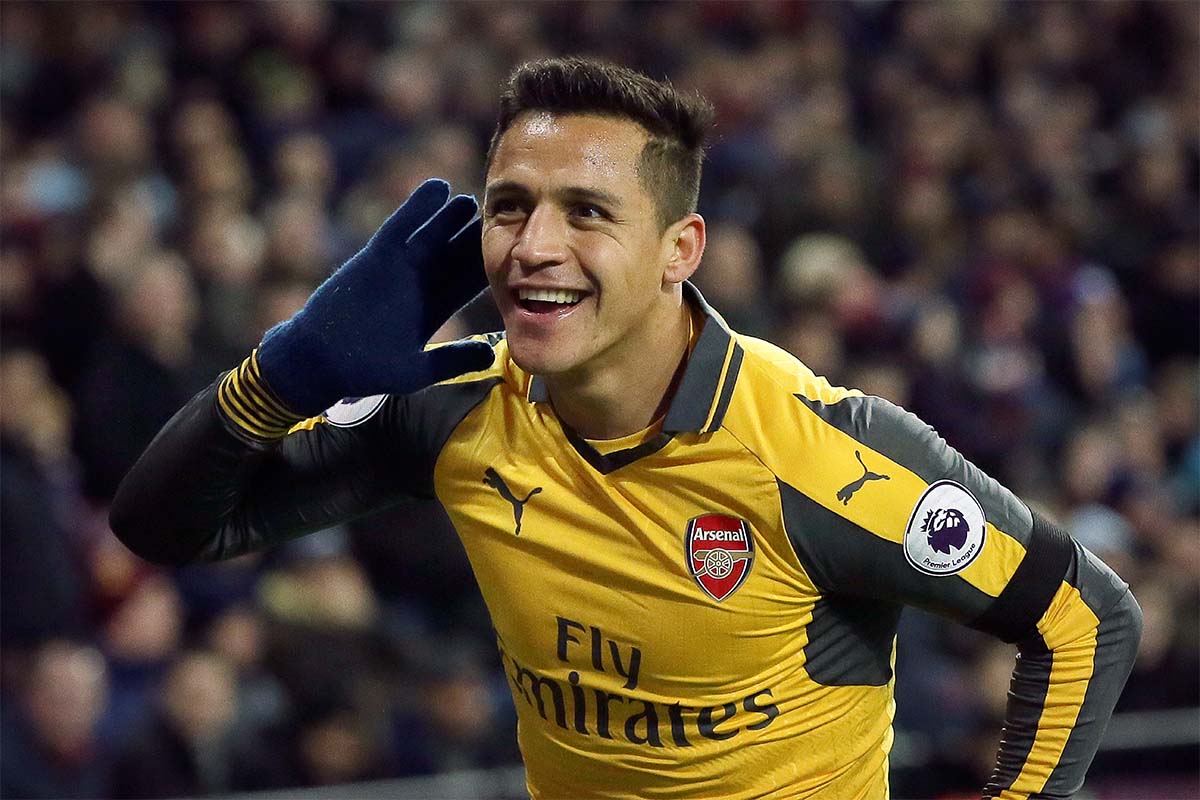 If the contract situation between the Chilean and the club can’t be resolved then the Gunners will turn to 22-year-old AC Milan attacker M’Baye Niang. It’s a move which is rated as a 2.5 on our Index.

It’s a name that Arsenal fans will already be familiar with.

The Frenchman was linked with a move to the club in 2012 after impressing during his debut campaign in Ligue 1 for Caen. Arsene Wenger apparently spoke for hours with the player but ultimately the Italian side acted with great haste to secure the deal. 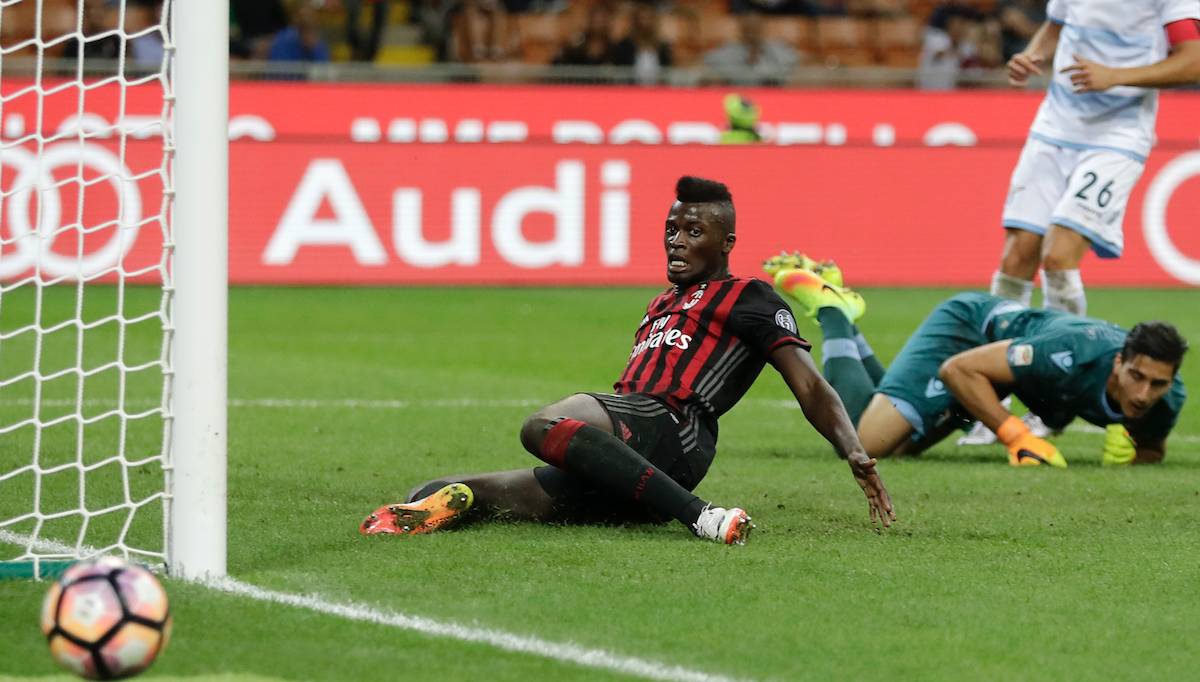 They’ve been tentatively linked with the attacker ever since and his name seems to resurface during every single transfer window.

His career at the San Siro got off to a slow start as expected. The youngster was a long-term investment who wasn’t expected to have an impact from the off. He was loaned to Montpellier in January 2014 and then Genoa in January 2015. He really seemed to find his feet during the latter loan and finished with five goals in just the 14 appearances. Milan rejected a reported £16million offer from Leicester City in January 2016 and under new manager Vincenzo Montella he’s become a first-team starter and has three goals and two assists in 13 Serie A starts.

It can’t be encouraging to hear as a fan that your club is preparing for life without your star player, but at the same time the fact you are reportedly planning for this eventuality should be seen as a positive. Far too many clubs these days appear to be reactive as opposed to proactive. Liverpool’s erratic approach in the market after losing Luis Suarez should be an example to every club on what not to do when your MVP has eyed the door.

Contingency planning is key to success. But it has to be intelligent.

Is Niang really the man to replace Sanchez? 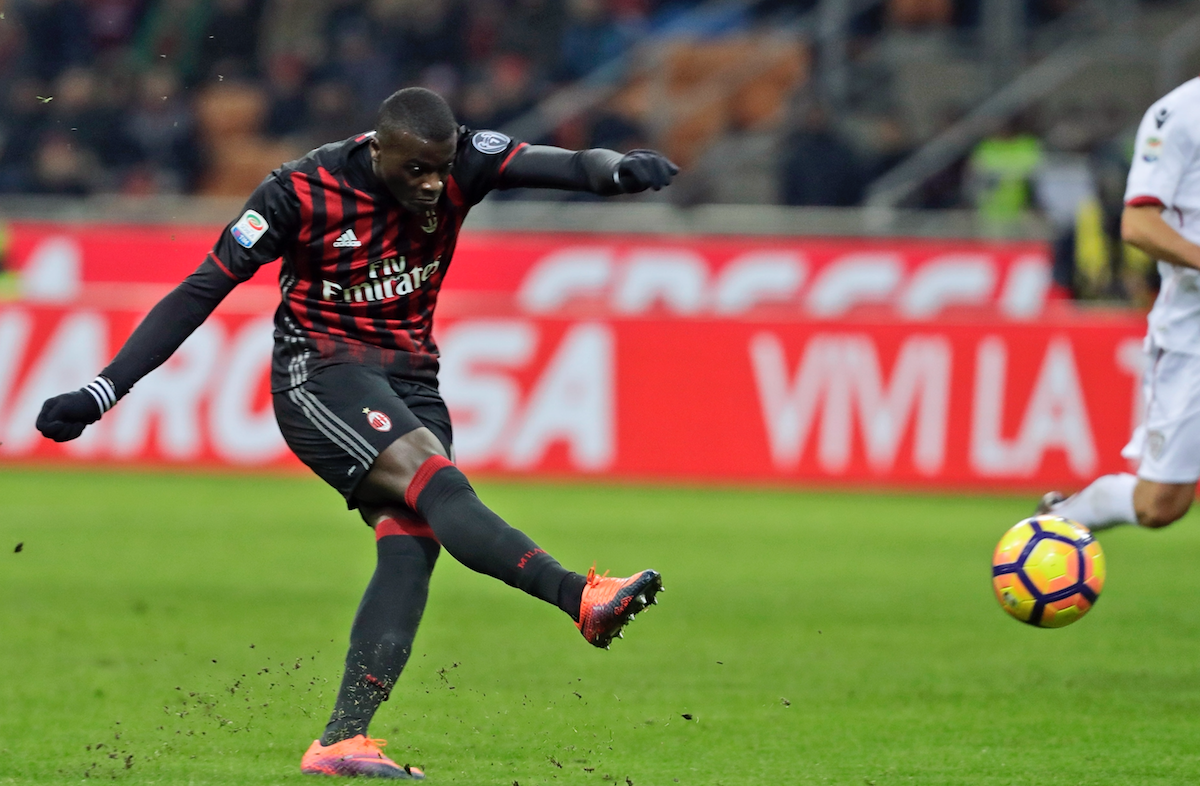 Niang is perfectly suited to the Premier League and the player himself acknowledged it in an interview with Gazetta dello Sport:

“The Premier League could’ve been the right football for me and I hope one day it will be. Playing there is my dream as it suits my style of play.”

The athletic Frenchman is big, powerful, quick and has an abundance of ability. He’s everything a modern day Premier League defender dreads. He’s capable of using either foot meaning defenders never know whether to press him or to stand off of him. This enables him to be deployed anywhere across the front as well as leading the line if required. He uses his strength to keep hold of the ball and he’s always looking to be positive with his play.

He’s direct by default and when he puts the afterburners on there are very few who can keep up with him. 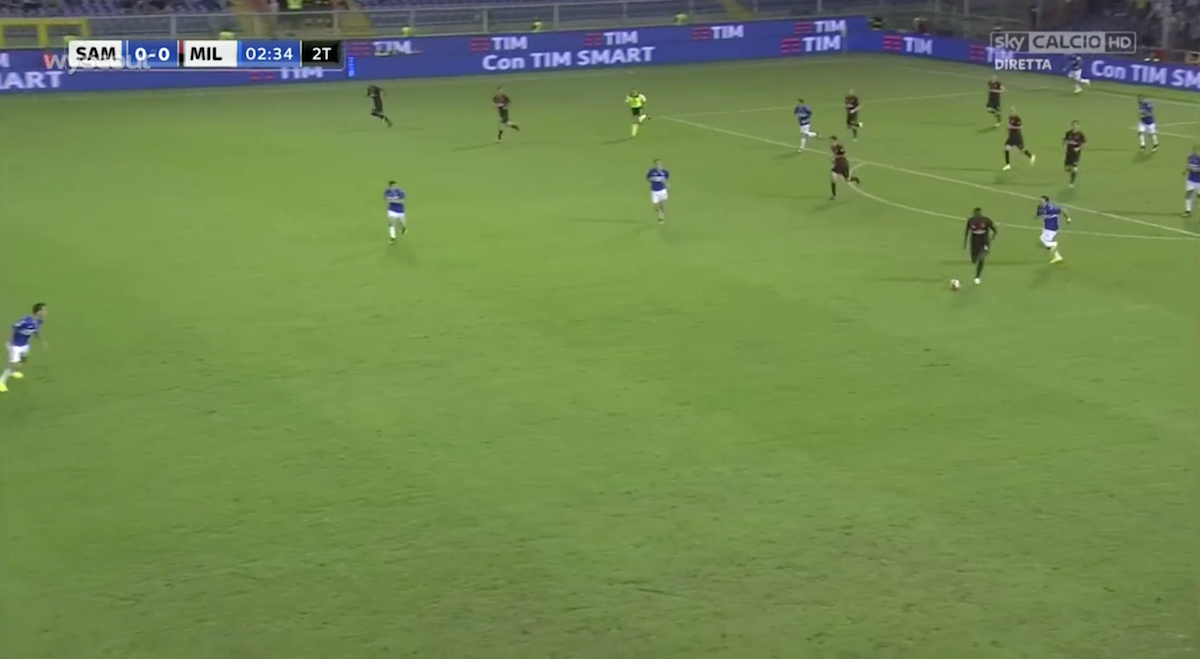 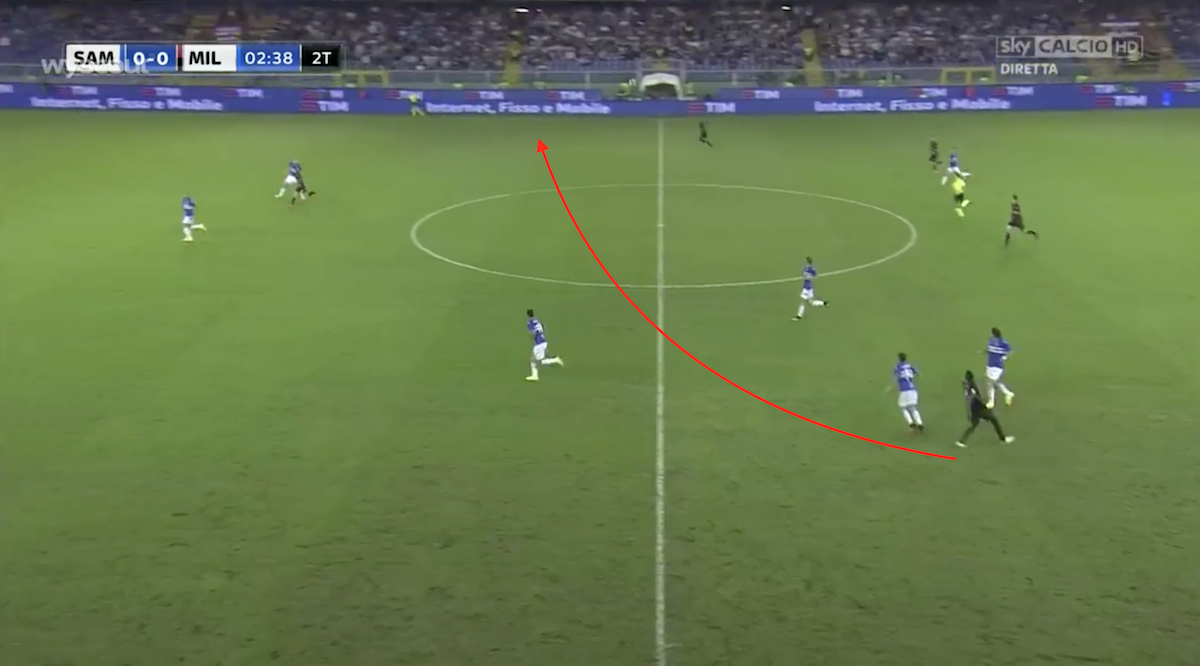 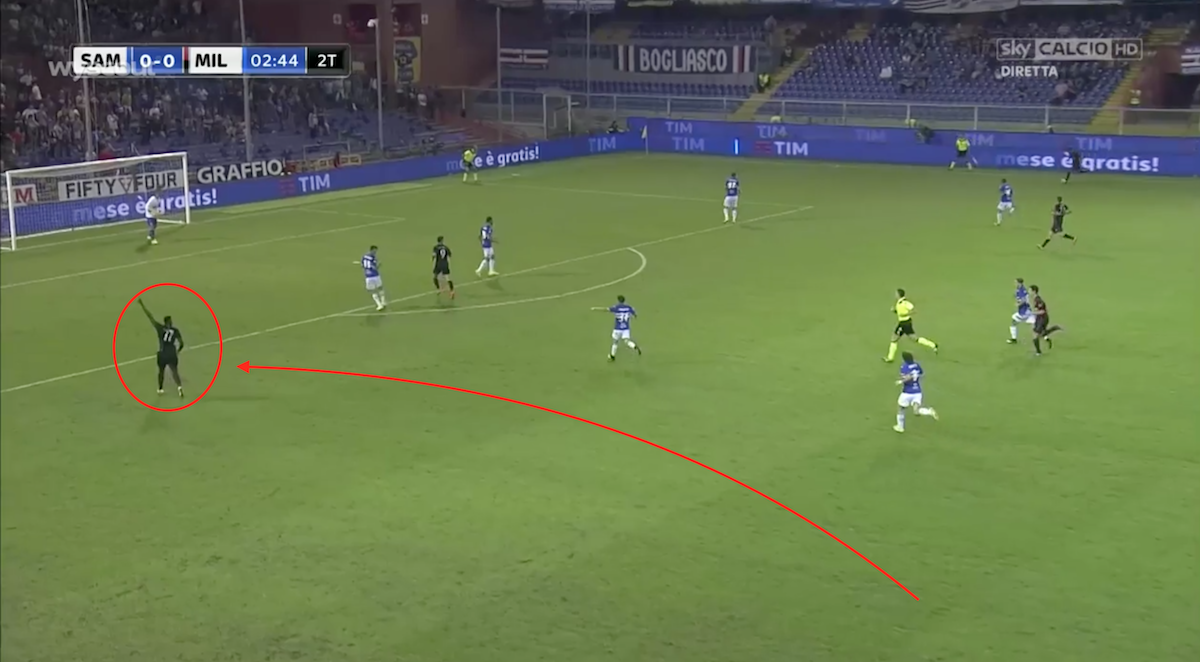 In the three pictures above you get to see a whole host of what Niang has to offer. Milan are initially defending a corner when the ball falls to the player on the edge of the area and he drives forward into space. Four Sampdoria players converge on him but before they are able to dispossess him he switches the ball from the left flank to the right, straight into the path of the Milan player.

He doesn’t just admire the pass though. He continues his run forward at a blistering pace and his gangly legs just eat up the ground effortlessly. Six seconds separate picture two and three. He shows his intelligence by angling his run away from the bodies centrally and into the space on the left of the penalty area. 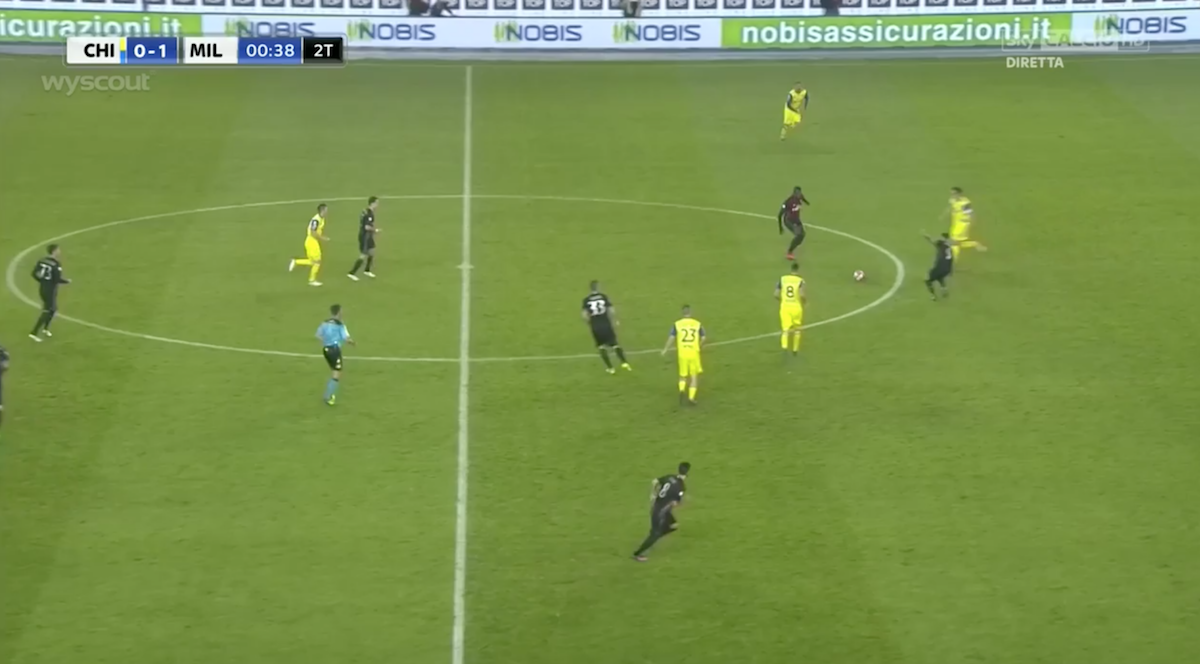 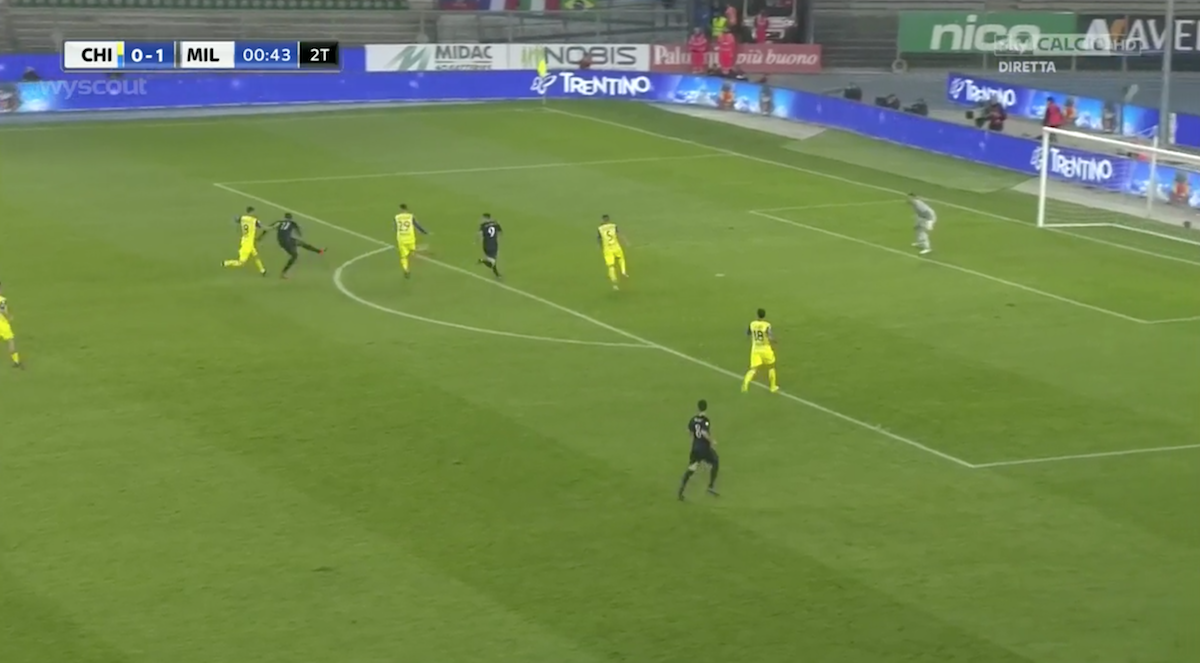 In the above two pictures Niang has drifted centrally from the left-wing position he occupies for Milan normally. He presses the Chievo man and it leads to the home side carelessly giving the ball away. Milan then thread the ball through and it’s one that Carlos Bacca, the more experienced and more established player, could take charge of with a counter attack on the cards. But it’s Niang who brings the ball under his spell and carries it forward before unleashing an unstoppable left footed drive past the hapless ‘keeper.

The obvious one would be his poor finishing and his lack of patience. However, both of those can be worked and are things that come with maturity and experience. For now though they are the issues in his game.

He’s scored just the three goals for Milan this season despite averaging 2.1 shots per 90 minutes. His shot selection is poor and his finishing is erratic. He’s not against lining up a shot from 30-yards plus, which isn’t a negative if you’re accurate from distance but Niang unfortunately isn’t. In a system which relies on patience and intelligent use of the ball, having a player doing that would just frustrate Wenger and the fans.

He’s not prolific but that’s not to say with a bit of refinement he couldn’t be.

He does share a lot of traits with Sanchez and there are similarities but in every area, other than aerials won, Niang is inferior and it would be a downgrade for the Gunners. At least in the short-term. Arsenal have also been linked with Porto’s Andre Silva who may be a better suited replacement.

Arsenal fans shouldn’t be put off the idea of signing Niang. He’s a good player who would suit the team. He’s just not a Sanchez replacement. He’s under contract until 2019 and Milan may want to cash in on him soon before the time remaining on his current deal starts to impact his valuation.

Click here for a fan's view on what transfer business Arsenal should do in January.