Whether Manchester City will be able to match their performances from last season will shape how a lot of the Premier League, at least at the top, looks.

Pep Guardiola was asked, in his pre-Community Shield press conference, whether City could do it again, thereby avoiding the post-title collapses that seem so common nowadays. He didn’t particularly answer the question, but it was an interesting point to raise.

It’s particularly relevant given that City were a side who counter-pressed so much, getting in the opponents’ faces after losing the ball so quickly it made up for the fact that the side were playing four attacking midfielders.

Add to that the fact that the players will now be coming off a World Cup, and the spectre of post-title fatigue is a very real thing to be wary of.

However, the ‘Champions Malaise’ may not be as big a thing as it’s been made out to be. Take out Leicester – whose slingshot back towards mid-table was more dramatic than expected but, nonetheless, expected – and Ferguson-to-Moyes Manchester United, and every Premier League winner of the last decade has finished in at least second… or been Chelsea. 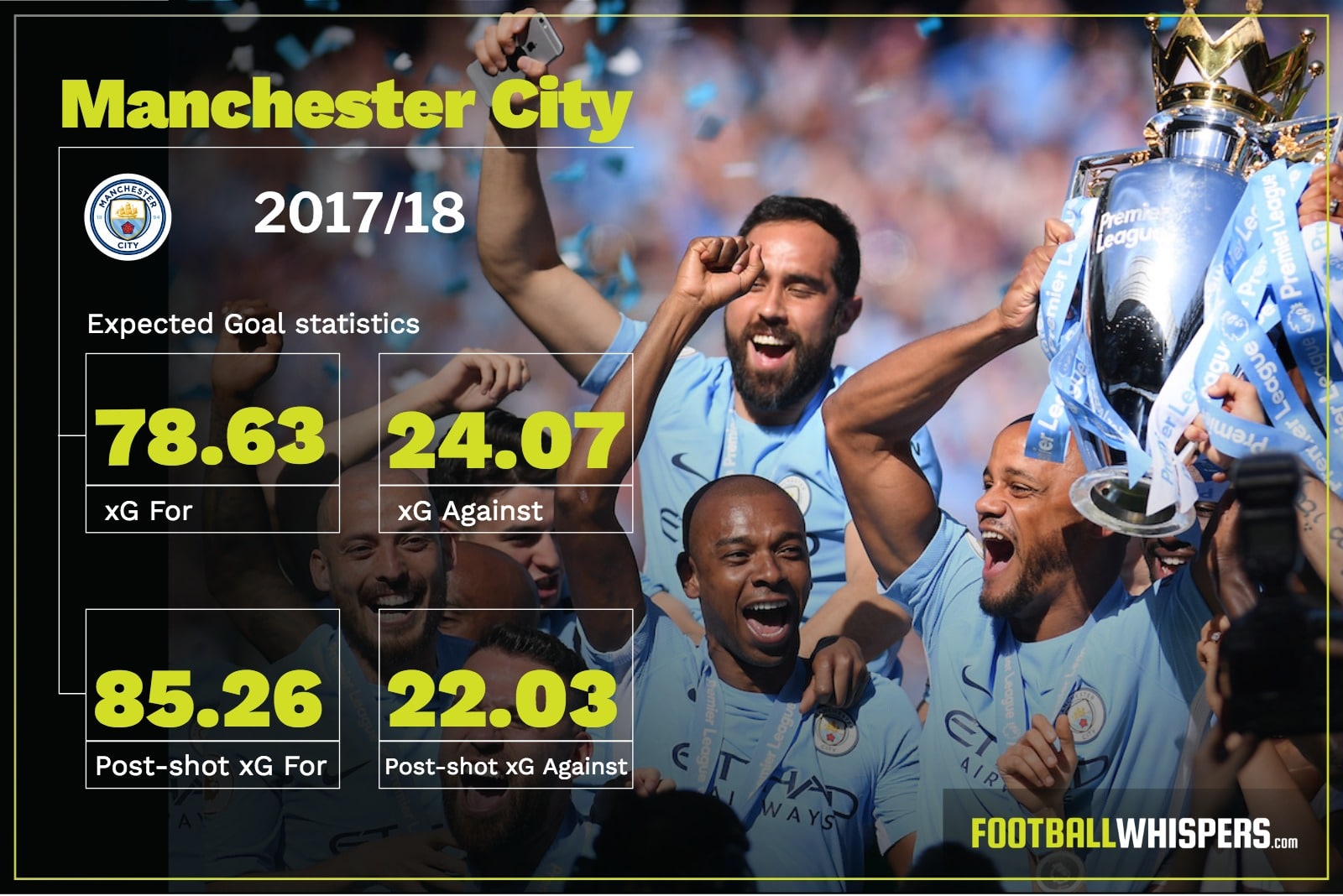 Granted, both of Chelsea’s implosions came within a couple of recent years of each other, in an era where the top of the Premier League is perhaps more competitive and stressful than before. The Blues have always been somewhat volatile, though.

The quality of City’s squad still shines through, to the extent that a summer where they’ve only bought Riyad Mahrez doesn’t look too disappointing. As clichéd as the phrase is, the return of Benjamin Mendy to fitness is kind of like a new signing too, considering how little he was able to play last season.

The scary thing is that there isn’t a part of the team’s performances that looked particularly vulnerable in 2017/18.

They created the most expected goals and conceded the fewest. When taking into account shot placement, their figures improved on both sides of the ball, meaning that there are no longer hints that they’re being caught short at the back and giving up unusually high-quality chances.

Fears about fatigue may even be over-blown. They neither won possession noticeably more in 2017/18 than in 2016/17, nor did they win it further up the pitch (implying a more intense press rather than settling into a nice compact block further down the field). 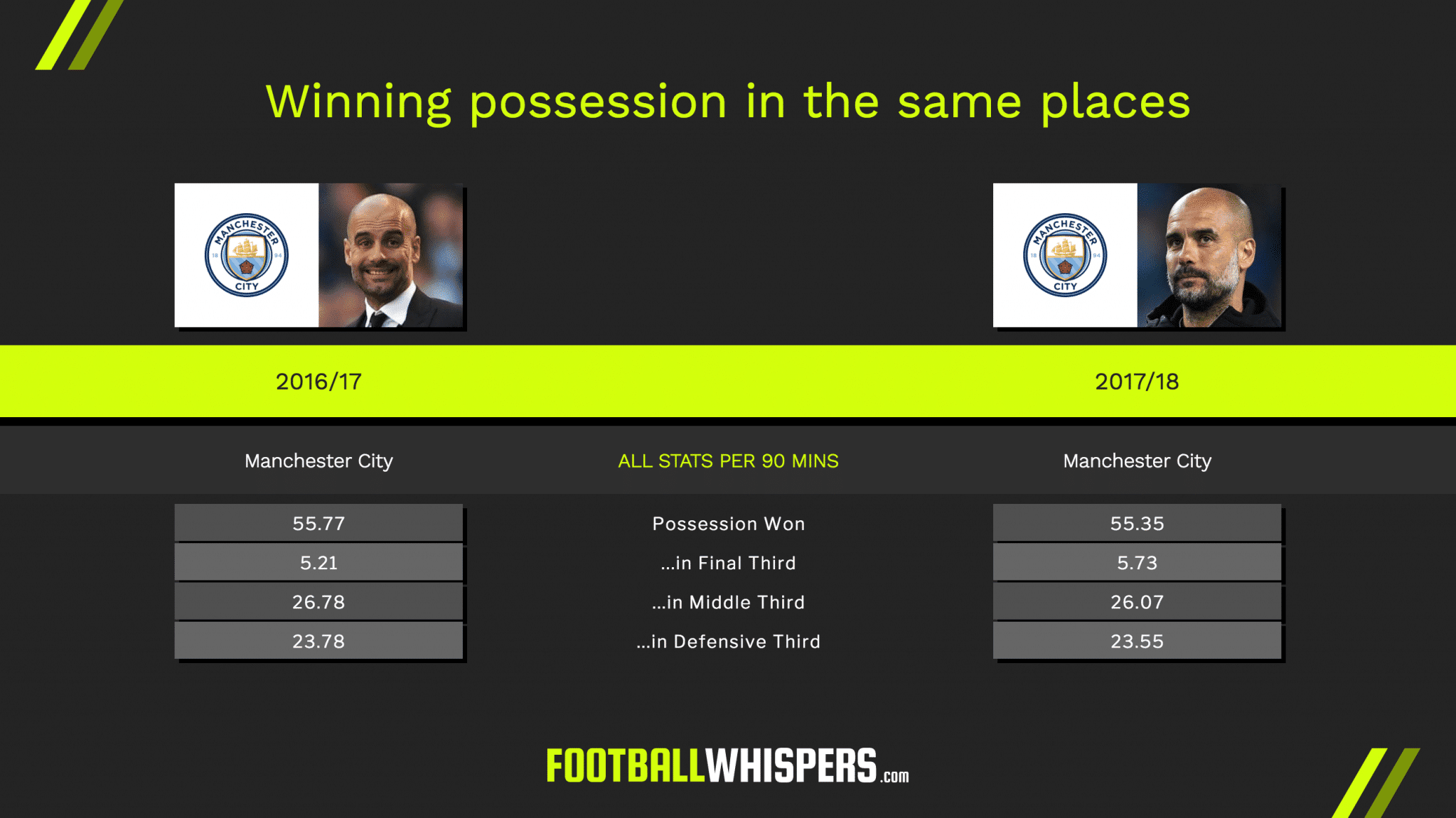 When pressed – as they were by Liverpool, most notably – they looked more human, think Batman vs Superman where Bats brings out the kryptonite and his adversary, finally, bleeds.

But not everyone has that kryptonite available to them (in fact, most teams probably don’t), and just like in the DC film, the effects don’t last forever. Teams who press intensely tend to tire, just as Liverpool’s 4-1 lead in the league in January was almost overturned, finishing 4-3.

By the time the sides met in the Champions League, Jürgen Klopp seemed to have it worked out, but Pep Guardiola will surely have been studying those two legs intensely over the summer to try and make sure that being overturned like that, 5-1 on aggregate, doesn’t happen again.

He may also have spent time working out how to stop City being as vulnerable to a collapse. As this BBC article points out, they conceded three goals in 20 minutes or less three times last season.

These flurries may have come about because of the way City try and press, and that breaking the press can lead to good chances. If you’re pressing badly but keep pressing anyway, you’re likely to give up goals. With extra time with Guardiola under their belt, City’s players will probably be able to navigate these moments better than last season – and even then, they didn’t happen very often.

So can City do it again? The 100 points, probably not. But the convincing title challenge? Almost certainly.