Leicester City are strong favourites to sign Hull City defender Harry Maguire as they look to get back on track following on from a disappointing title defence. The Foxes finished in 12th place but just the four points separated them and 17th-placed Watford.

It took a remarkable turnaround under Craig Shakespeare to ensure they weren’t dragged into a relegation fight less than 12 months after lifting the Premier League title.

Those at the King Power Stadium won’t be dwelling on their league finish. No, instead they’ll be looking at the season ahead and how they can improve on what went wrong during the 2016/17 campaign.

The team conceded 63 goals last term and with both Wes Morgan, a transfer target for Newcastle United, and Robert Huth not getting any younger this is seemingly where they’re starting their systematic upgrade.

This is where Maguire enters the mix. The 24-year-old defender had somewhat of a fairytale season with the Tigers. The former Sheffield United man was used sparingly at the start of the season but really come into his own when Marco Silva took over at the KCOM stadium. 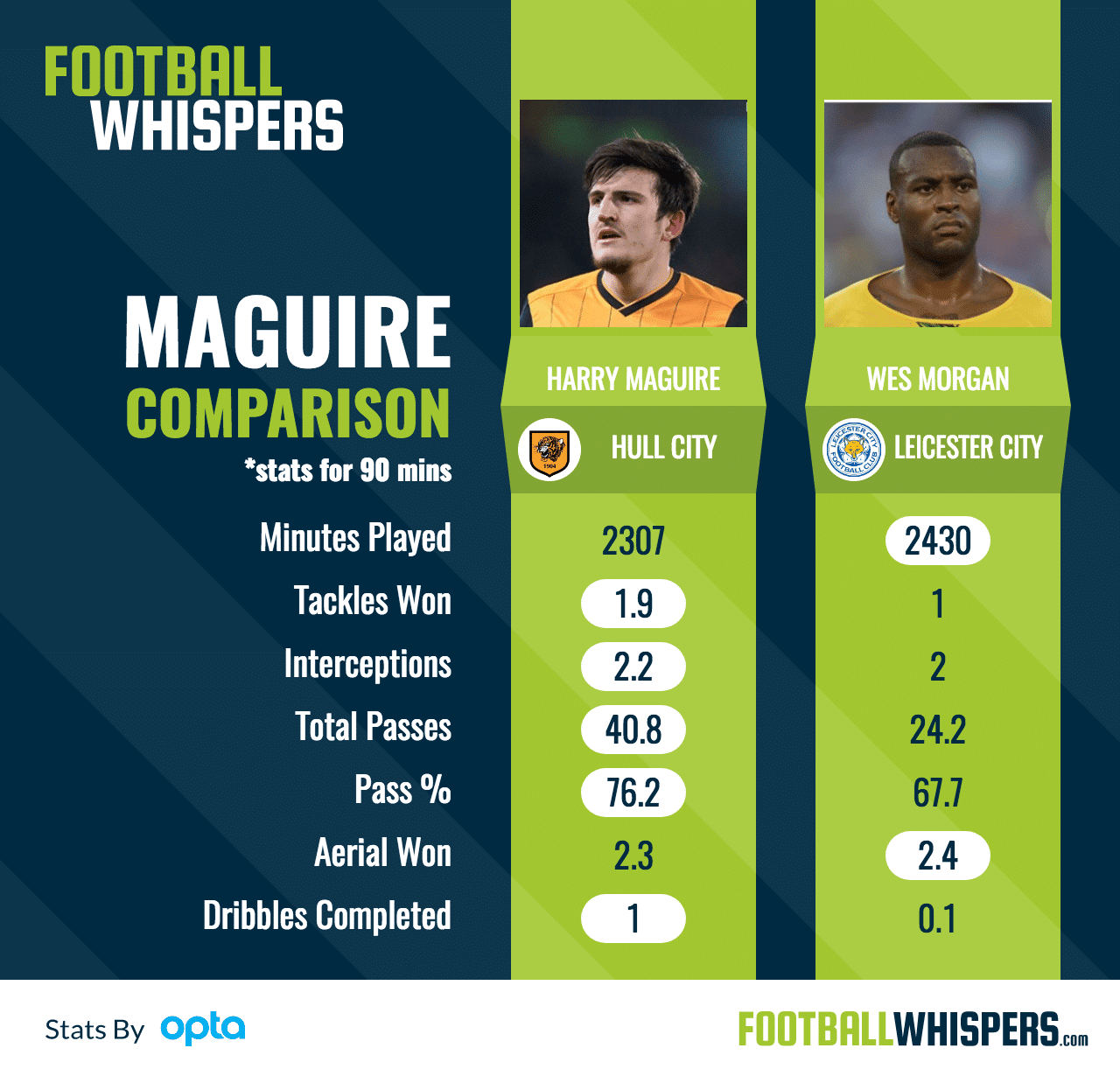 As you can see from the graphic above, Maguire, for the most part, does everything Morgan can – but better. However, context is needed when looking at the stats listed.

More tackles for a centre-back isn't always a positive but it is worth nothing he was playing in a rather open Hull side without protection from the midfield for large spells.

Morgan was afforded protection in the form of Daniel Drinkwater and the impressive Wilfred Ndidi.

The way Leciester play has an impact on Morgan's pass percentage, and would do on Maguire's if he joined. They look to play on the counter to get Jamie Vardy into the game so long balls by the centre-backs are common. They don't come off and the result is a low pass completion.

This differs to the style Silva implemented at Hull. He looked to retain possession and encouraged his centre-backs to be part of the build-up phase. His defenders saw more of the play and played what many would consider to be safer passes.

His marauding runs from a defensive position made him standout with many believing his form warranted a place in Gareth Southgate’s new look England side. In fact, he looked more composed and comfortable on the ball than £50million Manchester City centre-back John Stones.

His contract status – his current deal expires in 2018 – saw the Sheffield-born defender linked to some of the top six clubs in the Premier League. All eagle-eyed looking to land a bargain, Liverpool, Chelsea, Arsenal and Spurs were all reportedly interested.

It was the latter who retained their interest though. Along with newly promoted Newcastle, it's Spurs who are said to be rivals to Leicester for Maguire's signature.

Sky Sports claim bids have been made for the centre-back. The Hull Daily Mail reported at the end of May that it would take a £22 million bid to prise him from the KCOM Stadium this summer. 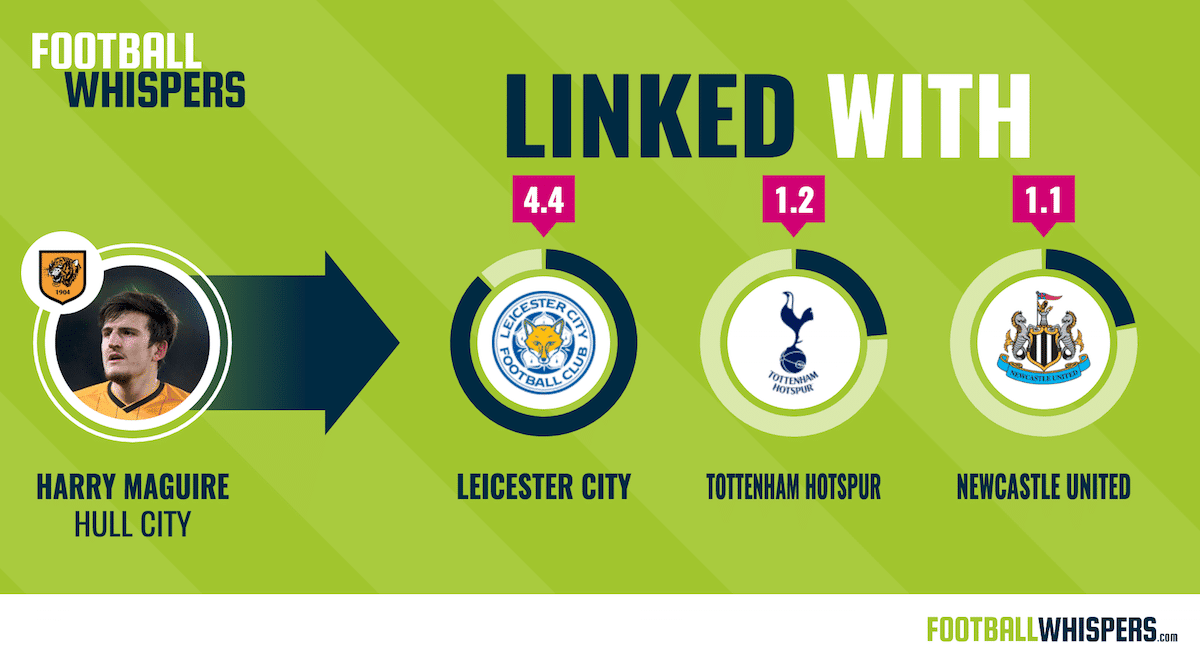 The Foxes supposedly have the money. They were linked with a £30million move for Middlesbrough centre-back Ben Gibson back in May. It's unlikely Spurs would part with that amount for a third-choice centre-back and Rafael Benítez is usually a lot more thrifty in the market giving Leicester a clear run at him.

Maguire all but confirmed his intentions to leave the club when he revealed his aim was to be playing Premier League football.

“Contract talks have been put on hold,” said the former England under-21 international.

“We came to an agreement, that it wasn’t the right time to talk, I’ve still got a year left so we can talk at the end of the season.

“I’ve worked so hard to play in the Premier League, I don’t want to let that go. I’ve been playing week in, week out under Marco who has shown great faith in me. My main aim is to stay in the league.

“There have been a couple of times here where I’ve felt like I might have to leave, because there didn’t seem to be a way into the team. Thankfully I was patient. The speculation about me isn’t a distraction but it’s massive to stay in the Premier League.

“You have to be wary of making the wrong move. You have to make sure you move at the right time, I’m very happy here, but playing in the Premier League is my main aim.”

Watford's new manager, and Maguire's former coach, Silva spoke highly of his centre-back when asked at the end of the season. He knows what he's talking about too.

Leicester fans may not want to hear this but Maguire could use the club as a stepping stone. A series of solid, consistent performances could see him linked with a move to a Champions League club much like was the case with Vardy – linked with Arsenal and Liverpool – and Riyad Mahrez – a rumoured transfer target for Barcelona.

Maguire is a powerful, brutish and commanding centre-back with his best years still ahead of him. If a club below the big six wanted to build a defence around someone then he's a perfect candidate and he's definitely an immediate upgrade on Morgan.