Reports in Spain suggest Barcelona's Lucas Digne could be on his way out of the Nou Camp this summer. Liverpool are in the market for a left-back. Could it be third time lucky for the Reds having missed out on the Frenchman twice before?

Liverpool's interest in Southampton's Virgil van Dijk and Roma's Mohamed Salah has rightly taken centre stage over recent weeks. According to reports the arrival of the latter should be confirmed sometime this week while the Reds remain confident of landing the Dutchman.

It's a positive that Jürgen Klopp and the recruitment team are aggressively pursuing their top targets early on in the summer transfer window. However, what's even more encouraging is to hear that the German manager isn't ignoring the less glamorous roles and wants to bring in a left-back.

At times over recent years Liverpool have neglected certain areas of their team and simply papered over the cracks. Made do with what they've got instead of looking to strengthen.

Paul Joyce revealed that although the Reds have withdrawn their interest in Fulham's Ryan Sessegnon, they are still in the market for a left-back.

Football Whispers exclusively revealed Hull City's Josh Tymon was on the club's radar. Liverpool had previously been linked with moves for Real Madrid bound Theo Hernández, Andrew Robertson, Sead Kolašinac, Ben Chilwell and Jonas Hector as well as the aforementioned Sessegnon but moves have yet to come to fruition.

With that in mind, perhaps it's time for the club to revisit their interest in Digne.

The 23-year-old was again linked with a move to Merseyside last summer before eventually signing for Barcelona in a deal worth close to £17million.

It was part of a youth movement from the Blaugrana recruitment team. Digne joined Samuel Umtiti, Paco Alcácer, Denis Suárez and Andre Gomes – all 22-years-old and under.

It was clear Barcelona had a long-term plan in mind with these signings. However, It can't have been easy seeing his compatriot Umtiti become an influential part of the Los Cules backline while he was nothing more than a squad player.

Digne has taken minutes from highly-rated Jordi Alba at various stages throughout the campaign.

According to reports from Spanish publication Sport, he's open to moving from the Nou Camp this summer in search of first-team football. Lyon have been linked with a move for the former Lille full-back with Maciej Rybus reportedly due to join CSKA Moscow.

However, despite these reports there have been no rumblings from the player or his representatives that this is the case

Would Digne be a good fit for Liverpool?

For starters, he's a genuine real life left-back with a left foot. He immediately adds natural balance to the Liverpool side that they severely lacked last season.

James Milner has done an admirable job as a left-back given it's not his natural position, but the longer the season went on the more abundantly obvious it became that he can't be the long-term answer there.

The former Leeds United player narrows the play due to the fact he has a tendency to cut in onto his favoured right foot. It's even more of an issue because Philippe Coutinho, the left sided attacker, cuts in onto his right foot too.

It enables the opposition to become narrow and compact knowing there's no threat down the left hand side – it leads to the team, and their play, becoming predictable and easy, to an extent, to manage.

Digne's career may have stalled a little since bursting onto the scene with Lille. His stock may have fallen but it is worth noting he's played for two of Europe's best teams.

On paper, he's what many would consider to be the perfect Fenway Sports Group signing. Undervalued with a high ceiling. He wouldn't cost a fortune but could be worth a small fortune if he's able to fulfill his potential. 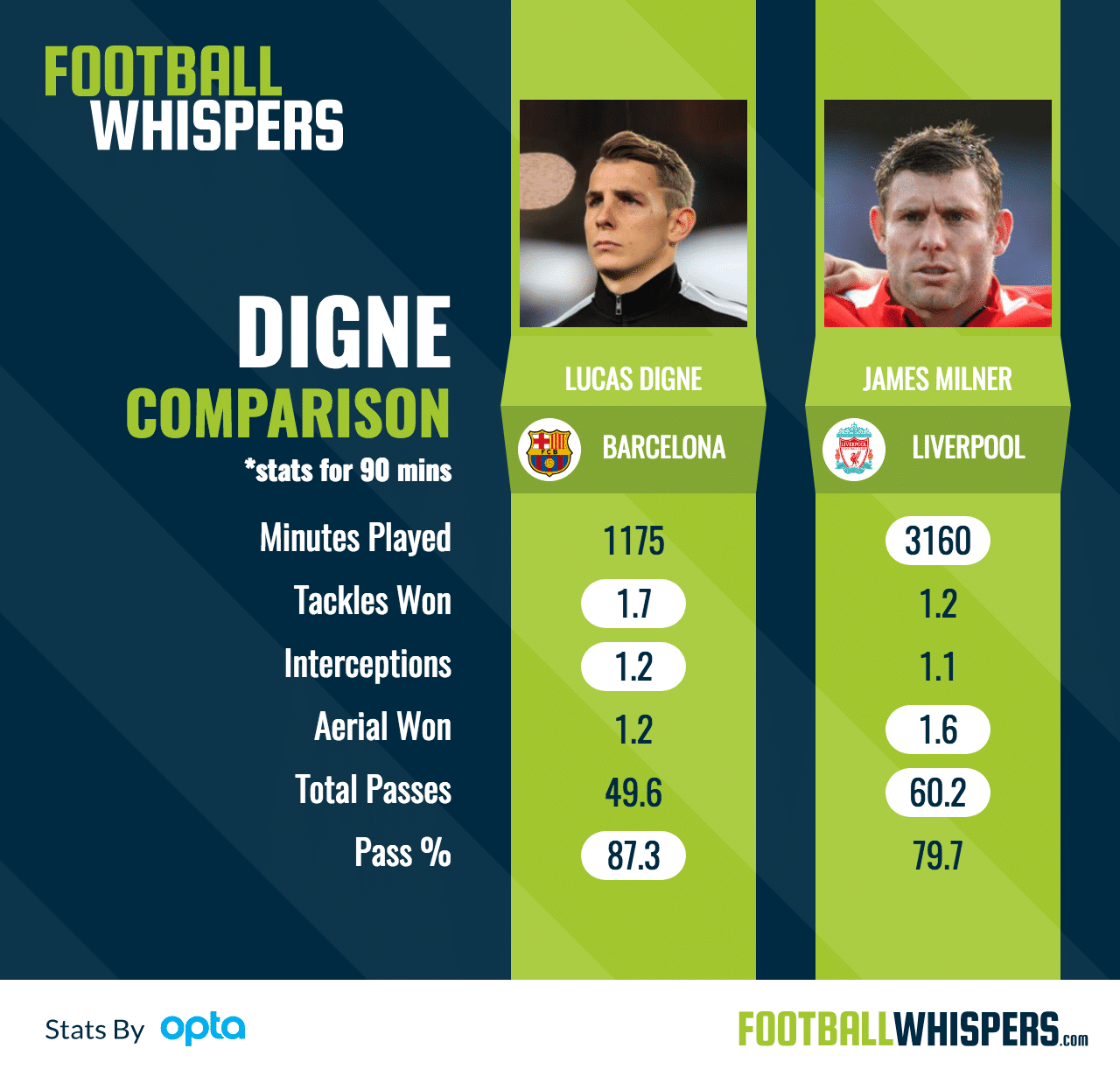 He's used to playing in teams that see a lot of the ball meaning he's confident and competent when in possession. It's something Klopp values, with a lot of Liverpool's play coming down their left flank and Milner averaging the second highest amount of passes, on average, by a full-back in the Premier League.

He's not just an offensive outlet, though, he's also reasonably defensively solid. The opposition dribble past him just the 0.4 times per 90 minutes whereas Milner is beaten 1.3 times.

Digne has experience coming up against deep, compact defensive lines on a regular basis. He knows when to hold his position out wide, when to look to get in behind, when to cross and when to play a more measured pass.

Stylistically he ticks many boxes. He may not have been linked with a move to Merseyside again just yet but an opportunity may present itself. The recruitment team at Anfield are familiar with the player, he fits the profile both on and off of the pitch and he's not going to break the bank.