The Virgil van Dijk transfer saga rumbles on. Southampton’s central defensive star has been persistently linked to Liverpool, as well as a number of other top Premier League sides, but no move has been confirmed as yet. However, despite the prevailing lack of clarity, his departure from St. Mary’s appears inevitable.

The crucial question for the south coast side then will be how they replace the Dutchman. Fortunately, in Jack Stephens they may well already possess the answer.

In January, van Dijk suffered a foot injury that ruled him out for the rest of the campaign. One month later, Southampton announced the signature of experienced Uruguayan centre-back Martin Caceres on a free transfer to provide defensive cover.

However, the former Juventus and Barcelona man failed to assert himself upon the starting line-up, making just one appearance. Instead, Stephens was the player who stepped in to fill the void in the centre of Claude Puel’s back line.

When asked about the 23-year-old filling in, the manager stated: “He's a good player. He is an England Under-21 international and he knows about these important games. He has the quality and I have full confidence with Jack.

“He's a good defender, he's intelligent, he can anticipate the action. [He is] very good technically. With the Under-21s, you saw at home [against Italy at St Mary's], it was a good game, he was the best player on the entire pitch.”

Stephens went on to make 17 league appearances for Southampton last season, all of which came in 2017. And, with momentum and some strong performances behind him, the Englishman will be hoping to cement a regular starting berth in 2017/18.

Stephens: A defender in Southampton's image

Over the last five years, Southampton have found their own niche within the Premier League. Generally opting to play a possession-based game usually reserved for the league’s traditional big hitters, they have also made a wonderful habit of developing their own talent from within.

Stephens, then, is the archetypal Saints centre-back.

He joined the club while still in the formative stages of his career, arriving for £150,000 at the age of 17 after making six appearances for Plymouth Argyle in the English third tier.

While initially he was seen as a budding right-back, the years since have seem him develop into a refined stopper. He possesses the strapping physique of a classic British centre-back, standing at six foot one, however he also has the technique, comfort on the ball and athleticism more often seen in modern full-backs.

Combining the physical with the technical, Stephens has also shown good fundamentals. In his reading of the game, marking and assertiveness, he displays the raw defensive material to handle the tempo of Premier League action.

With sound technique and composure in possession, Stephens is unafraid to step forward with the ball at feet. This is one of the most admirable aspects of his game, as it is something few centre-backs – even many quality ball-playing ones – are capable of doing effectively.

When centre-backs are not able to bring the ball out from the back, this limits their options in build-up and makes it easier for opponents to stifle through marking or force errors through pressing. However, the 23-year-old’s willingness and ability to step forward and drive into the middle third often leads to drawing pressure and creating space for team-mates further forward.

The below still shows just how far forward the 23-year-old is willing to push on to advance possession on his own. Given time and space by the Stoke City defence, he moves deep into opposition territory. He doesn’t stop there however. Once he has played his forward pass, he moves around his marker in the other direction to collect the return. 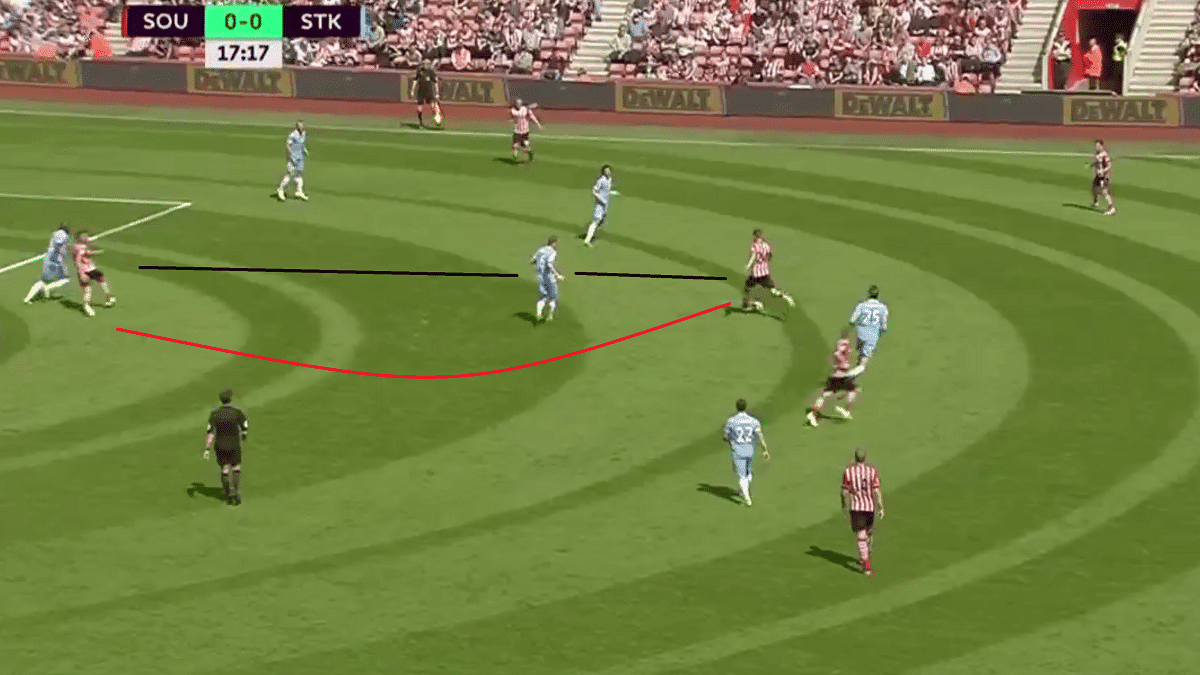 Against higher quality opposition, the prospect of bringing the ball out from the back is, as a central defender, slightly more dangerous. This is not only because the chances of being pressed effectively and harangued or tricked out of possession are higher, but so too are the incisiveness and speed of the resulting counter-attacks.

However, even against Manchester United, Stephens displayed an aptitude in moving forward with the ball at feet. In the below still, he is seen in possession under direct pressure from an attacking opponent. There is also the presence of two other opponents with good access on each side of him, as well as another closing in directly in front of him. 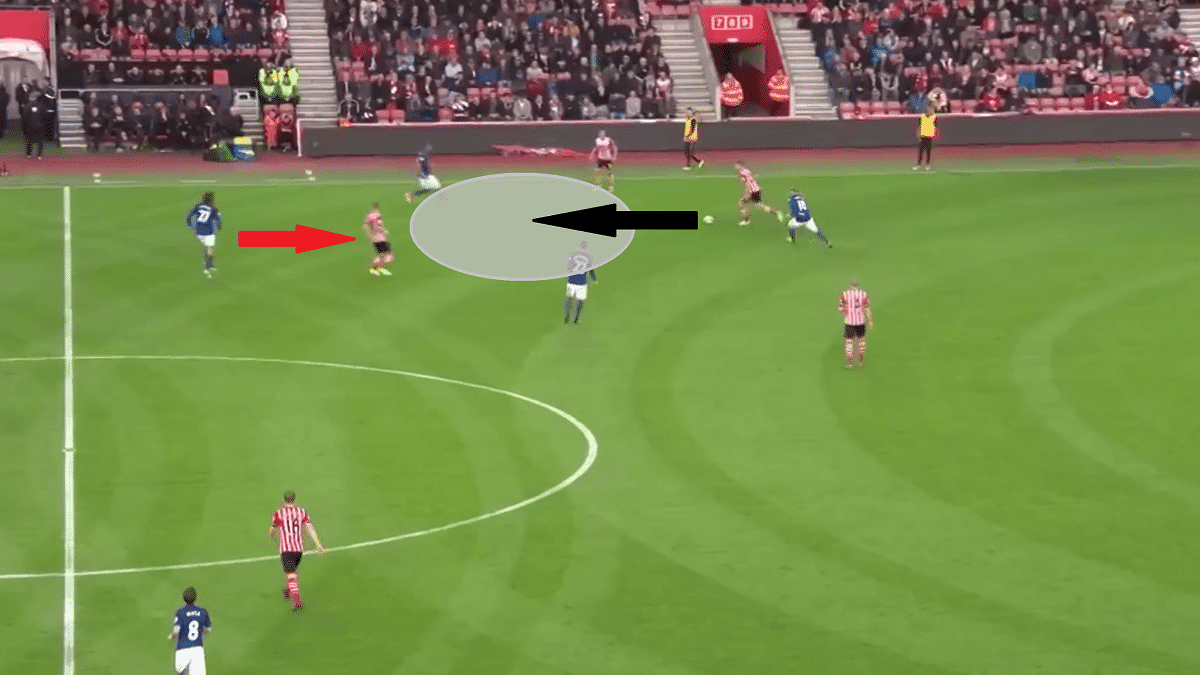 Yet, rather than revert to a simple long ball or sideways pass, the Southampton man drives on into the vacant space, drawing pressure from the oncoming opponent, freeing up space behind the aforementioned opponent, and playing a forward pass through the pressure.

As well as being able to push on alone through dribbles, Stephens is an intelligent ball player who helps to construct effective build-up through passes of varying distances and types. He is also able to penetrate the opposition’s defensive block with vertical forward passes, as seen in the below still. 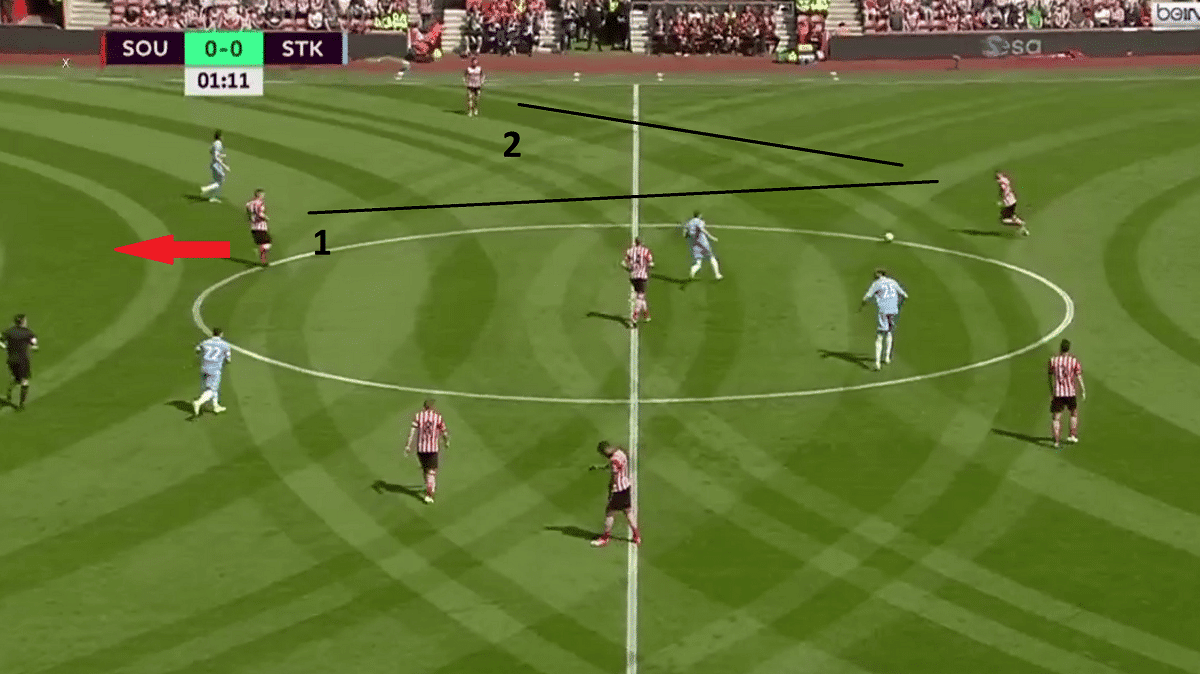 Rather than go for the easier and safer option of a sideways pass out to the right flank (two), he opts for a slightly riskier but more productive option (one). This choice was more productive as playing through the opposition can disjoint their shape, while playing around the opposition allows them to retain their shape fairly easily through simple side-to-side movements.

Stephens is also apt under pressure. In the below stills, an opponent runs toward him to harry him into a mistake or a long ball, in essence trying to force a turnover of possession. However, the youngster instead dummies to go long, deceiving the opponent, before pulling the ball back onto his left foot, creating time and space for himself. 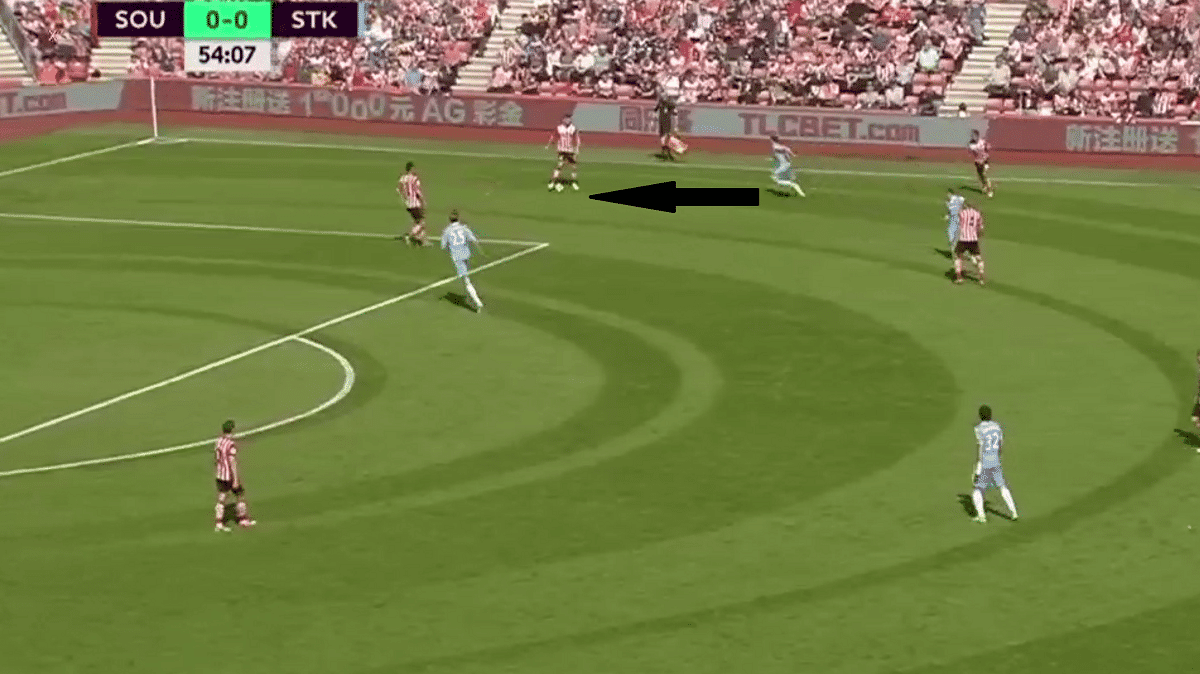 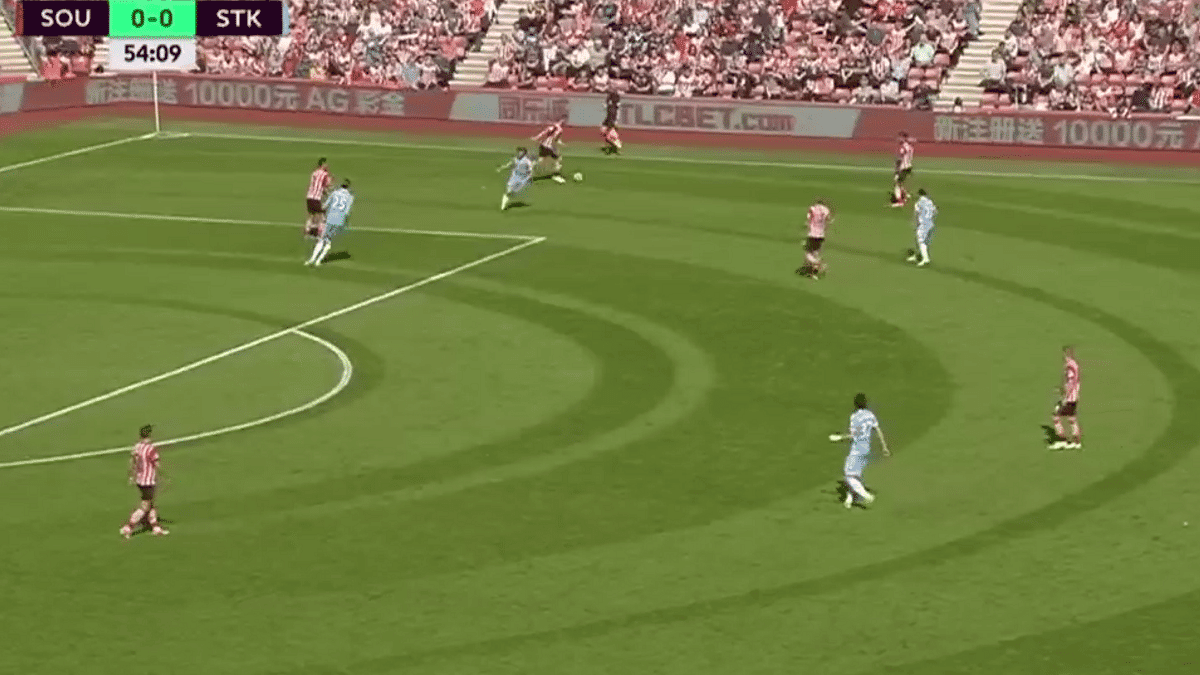 Stephens and van Dijk: The Numbers

On the ball, Stephens is evidently an effective operator and perfect for Southampton’s style of play. This is backed up statistically when compared to his central defensive team-mate.

While he completed slightly fewer passes per 90 minutes than van Dijk, his pass completion rate was equal to the Dutchman’s 84 per cent. He also created just as many chances on average – 0.24 per 90 minutes – as his esteemed colleague. 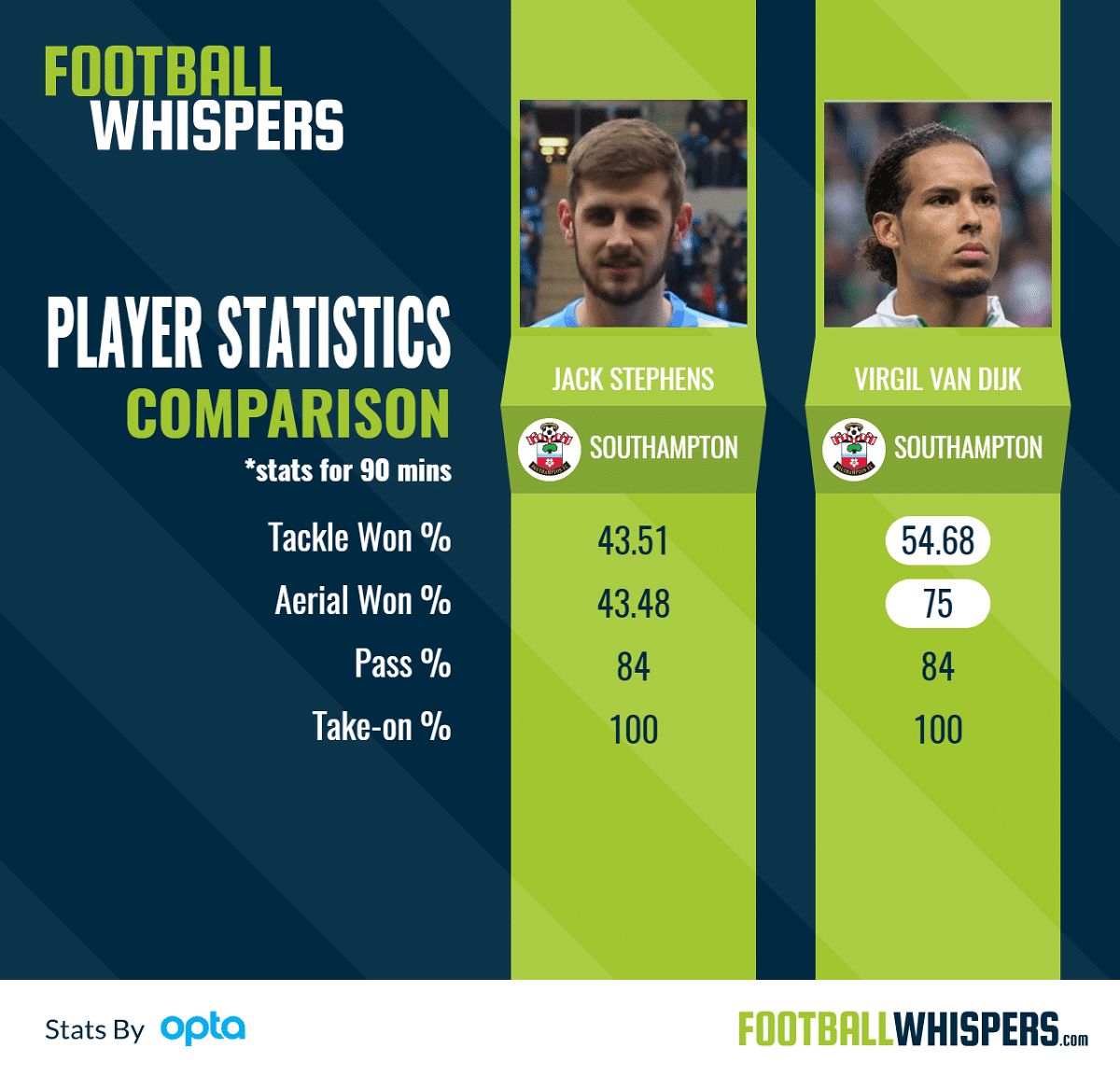 Stephens completed slightly more take-ons per 90 minutes – 0.43 to 0.39 – and did so at an exceptional 100 per cent success rate, which equalled his exit-bound team-mate’s percentage.

However, there is more to a centre-back’s game than their ability in possession.

Stephens not only won fewer tackles on average than van Dijk last term, but he lost more. He also made significantly fewer interceptions, and his aerial duel success rate was over 31 per cent worse comparatively.

While he lacks the commanding presence of van Dijk, Stephens undoubtedly has the technical and mental capacity to fill the void should the Dutchman move on this summer.

Furthermore, at 23 years of age, the Englishman has plenty of time on his side to round out his defensive game, becoming more assertive in the air and more efficient on the ground.