It has been six years since Internazionale sealed a historic treble by defeating Louis van Gaal’s Bayern Munich in that Champions League final at the Santiago Bernabéu.

José Mourinho’s side were at the pinnacle of European football, having won their fifth successive Serie A title (admittedly, one of which was awarded to them thanks to Juventus being stripped of the 2005-06 scudetto for their part in the Calciopoli scandal) and had vanquished Chelsea, Barcelona and Bayern in the Continent’s premier competition.

But they have failed to win a single trophy since their 2011 Coppa Italia triumph and have steadily slipped out of the title reckoning, even finishing as low as ninth in 2012-13.

Last season, under Roberto Mancini, the Nerazzurri finished in fourth place, just one spot below Champions League qualification. But the gap to Roma in third was a staggering 23 points.

This summer, Inter were subject to a takeover by the Suning Group from China. The investment that the new owners were prepared to pump into the first-team squad had fans believing that the glory days could soon be returning to the black and blue side of Milan.

However, worrying signs of discord soon emerged. Less than three weeks before the new Serie A season was due to kick off, Mancini left the club by mutual consent after his relationship with the new owners broke down due to a disagreement over transfer targets.

Mancini’s departure would not have worried Inter supporters too much, as he second spell in charge at the San Siro failed to reach the heights of his first and his overly defensive tactics would not be missed. But the fact that the new owners had already fostered a degree of disharmony was perhaps a bad omen for the season ahead.

Former Ajax coach Frank De Boer was drafted in and Inter began to make some serious plays in the transfer market. 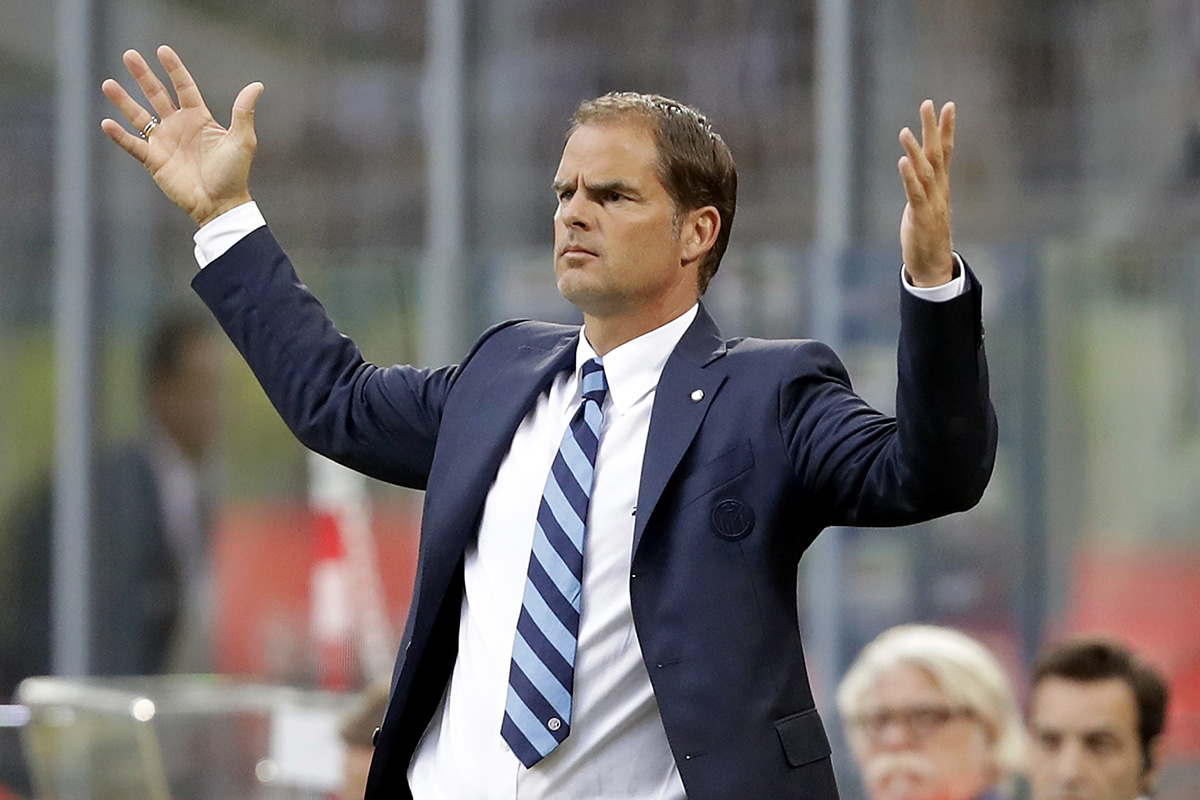 To the tune of around £100 million, the three-time champions of Europe brought in Antonio Candreva from Lazio, Joao Mario from Sporting Club de Portugal, Ever Banega from Europa League winners Sevilla, Gabriel “Gabigol” Barbosa from Santos and Cristian Ansaldi from Genoa.

Loan moves for Stevan Jovetic and Marcelo Brozovic were also made permanent.

But any optimism generated by this spending spree was soon eroded. The season so far has shown that Inter are still plagued by chronic inconsistency.

An opening day defeat to traditional strugglers Chievo was followed by a draw at home to Palermo. The third game of the new campaign saw De Boer’s side earn their first win by way of a 2-1 victory against Pescara, but humiliation soon followed in the Europa League against unfancied Israeli outfit Hapoel Be’er Sheva.

Financial fair play restrictions have meant that Inter are unable to field all of their new recruits in European competition this season, but there can be no excuse for their embarrassing 2-0 defeat on home soil to the champions of Israel.

Then, in their very next match, the Nerazzurri performed superbly to beat reigning Serie A champions Juventus 2-1 at the San Siro. Goals from captain Mauro Icardi and Ivan Perisic saw off the Old Lady. Inter carried this momentum onto their next fixture, dispatching Empoli 2-0.

Had things finally clicked for De Boer? Were we now seeing the real Inter?

Apparently not, as they have not won since. A disappointing draw at home to Bologna came next, then further Europa League dismay was doled out by Sparta Prague. After Roma had seen off Inter, Cagliari rolled into the San Siro last weekend to claim their first away points of the season by frustrating the home side and hitting them on the break to earn a 3-1 win.

Ahead of the visit of Cagliari, Icardi found himself in hot water with the Inter ultras of the Curva Nord. 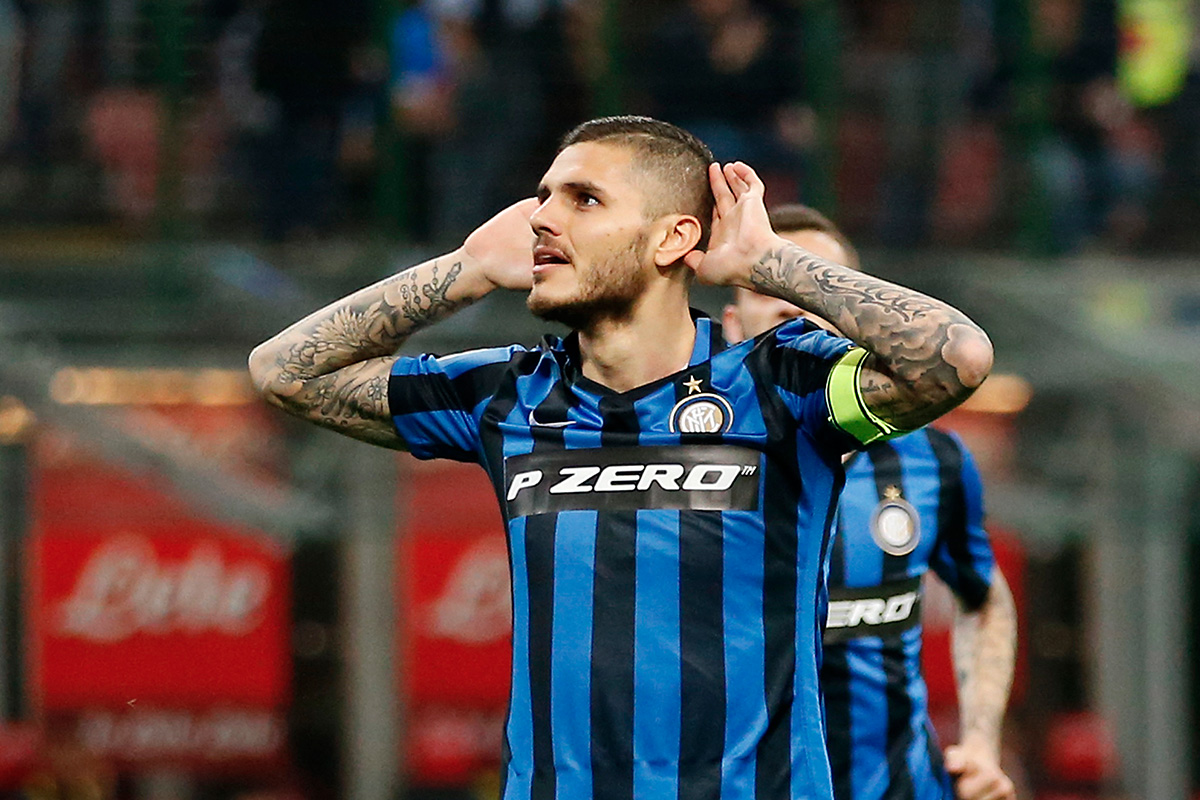 In his recently released autobiography, the Argentinian striker recalled a confrontation with a group of fans following a 3-1 defeat to Sassuolo in 2015. Icardi claims that he handed his shirt to a young supporter, only for one of the ultras to snatch it from the child and throw it back at him.

“This is when I start insulting him,” Icardi writes of his interaction with the angry fan. “Piece of s***, you are acting all arrogant with a little kid to show off to the rest of the curva? Do you think you’re hard?”

After standing his ground in front of the disgruntled supporters, Icardi claims he received a hero’s welcome back in the changing room, where he apparently claimed that, if the Inter ultras wanted to take the conflict further, he could “Bring 100 criminals from Argentina who’ll kill them where they stand.”

Sections of the Inter support were outraged by this passage of Icardi’s book and demanded he be stripped of the captaincy. A banner was hung from the stand for the Cagliari game which read “You use a child to justify yourself and fling mud at us… You’re not a man… You’re not a captain… You are just a vile piece of s***”.

When Icardi missed a penalty with the match goalless, some Inter fans were heard to be cheering.

Icardi has since apologised and Inter have released a statement confirming that the 23-year-old has been sanctioned for his behaviour, though it appears he will continue as captain.

The former Barcelona and Sampdoria man has been Inter’s best performer this season, scoring six goals and providing two assists. He has demonstrated a significant growth in his game of late, too. For years, Icardi was seen as a pure poacher: fantastic at converting chances inside the penalty area but able to contribute little else.

This season he has proven himself able to link play with supporting midfielders and appears to be developing into a much more well-rounded forward.

Icardi will be key to any success Il Biscone might achieve this season but he will not be able to do it all alone. Of the new signings, Joao Mario has been most impressive to date. The Portuguese creator has had to play in a slightly deeper role than his customary position with Sporting and the Portuguese national team, either in a double pivot alongside Gary Medel in De Boer’s 4-2-3-1, or right of the midfield three when the Dutchman has switched to 4-3-3.

De Boer must find the right balance for his side, who need to improve at both ends of the pitch having scored 10 league goals and conceded the same amount so far this season. The Dutch coach needs to settle upon a formation that will provide adequate defensive cover while simultaneously getting the best from the creative talents of Joao Mario and Banega.

Inter currently lie in 11th place in the Serie A table, 10 points behind leaders Juventus. The title dream may be on hold for another year but with the talent in their squad, and with Icardi firing, a few defensive additions in January could see them back in Champions League contention.