It appears Premier League clubs didn’t get the memo at the start of the season which said, due to Jose Mourinho’s appointment and Paul Pogba’s arrival, the Red Devils were back. Coming up to the halfway point of the season, United currently sit 13 points off of league leaders Chelsea and 6 points off of fourth placed Manchester City. Neither are unassailable leads and a good run of form over the festive fixtures could see United gain ground.

The Christmas period really tests the depth of the squads and United are at an advantage having assembled a large first-team squad. There aren’t many teams able to name the likes of Juan Mata, Morgan Schneiderlin, Wayne Rooney, Memphis Depay and Anthony Martial on their bench. Yet, despite such squad depth, United seem a little lite in defence. Mourinho has has to use full-backs at centre-back and wingers as full-backs and although the defence has looked a lot better as of late, Mourinho’s squad could really do with another right-back.

Antonio Valencia, by trade a right-winger, has made the right-back position his own due to the fact Matteo Darmian didn’t adapt to life in England as many had expected. The 27-year-old joined from Torino in a deal worth a reported to close to £13 million in July 2015. He made 28 appearances under Louis Van Gaal during his debut season in England but has played just 514 minutes of Premier League football under Mourinho, with the majority of minutes coming on the left hand side. Ashley Young, another winger turned into a full-back, is Valencia’s understudy. While he does a job, should a Manchester United team include players simply doing a job or should they be excelling in that role? They have the finances to attract players so there’s no excuse. Especially not when the role in question is so important to the United system. 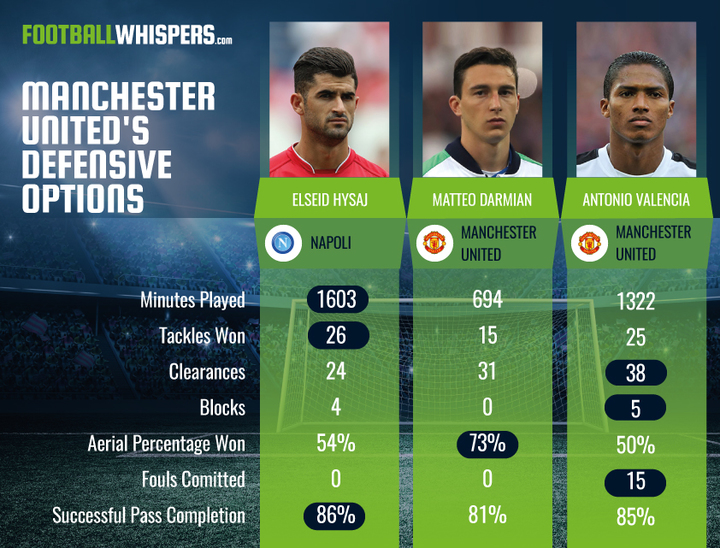 With this in mind, perhaps it’s time the club make a move for long-term rumoured target Elseid Hysaj. The Napoli right-back is reportedly a target for a whole host of clubs and at the age of just 22 is seen as a long-term investment. Both Manchester City and Chelsea are keen on bringing the £20 million rated defender to England but United have reportedly courted the Albanian defender for some time. To appreciate why Hysaj is suited to United you need to understand what demands are placed on the right-back in their system.

Why the right-back role is so important for Manchester United?

Many now associate Manchester United with parking the bus. There is some truth to Mourinho’s side being defensive at times but what goes unnoticed by mainstream media is just how effective the high United press is. Against Manchester City, Liverpool, Everton and Spurs, United pressed high and looked to disrupt their play. The opposition, more often than not, couldn’t build from the back and had to go long. A key part of the press is Antonio Valencia. Henrikh Mkhitaryan and Juan Mata, the two who play the right side of the attack, like to drift in field meaning Valencia is tasked with pressing high up the pitch to cut off the pass out wide. 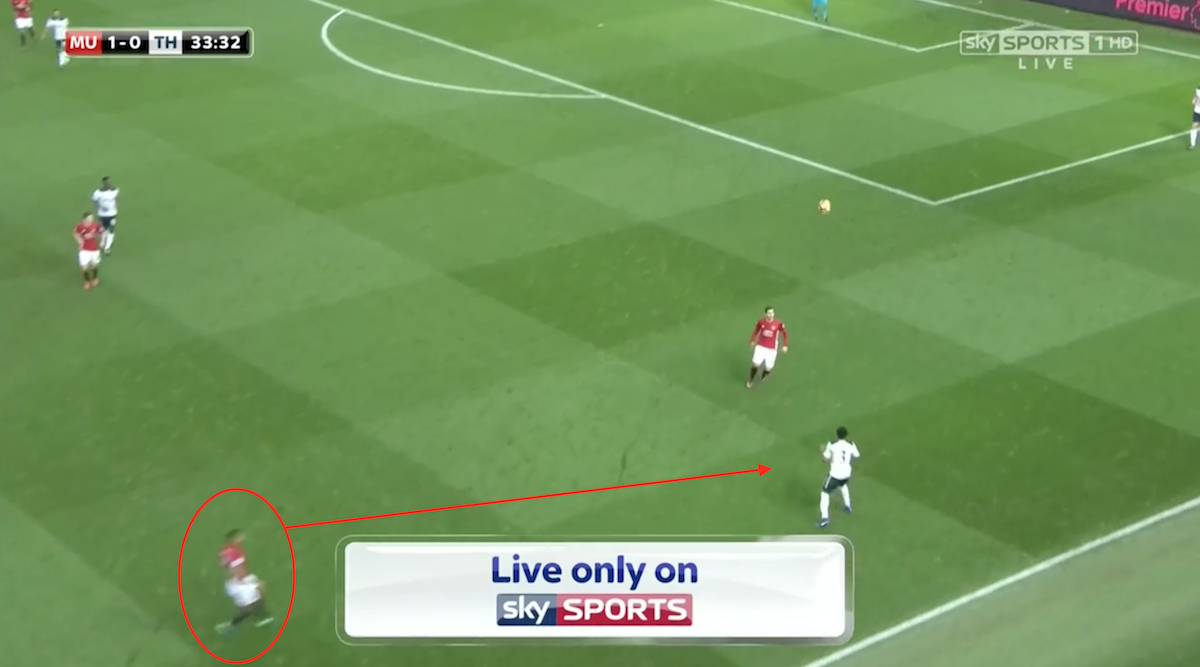 In the three images above, taken during United’s 1-0 win over Spurs, you get to see the influence, the impact and the involvement Valencia has on the United press. Spurs look to play out from the back and the ball is lofted to left-back Danny Rose due to the fact he’s the only unmarked man. However, as soon as the Spurs ‘keeper, Hugo Lloris, looks to play the pass Antonio Valencia sprints forward to put the England International under pressure. Before Rose is even able to set himself in possession Valencia dispossess him and United have the ball in the Spurs final third with an overload on the United right. The Spurs defence is horribly stretched centrally with both Ibrahimovic and Pogba making their way into the area as Valencia bursts into the vacant space down the right.

Mkhitaryan plays the ball to Valencia and the cross comes in before Spurs eventually clear. 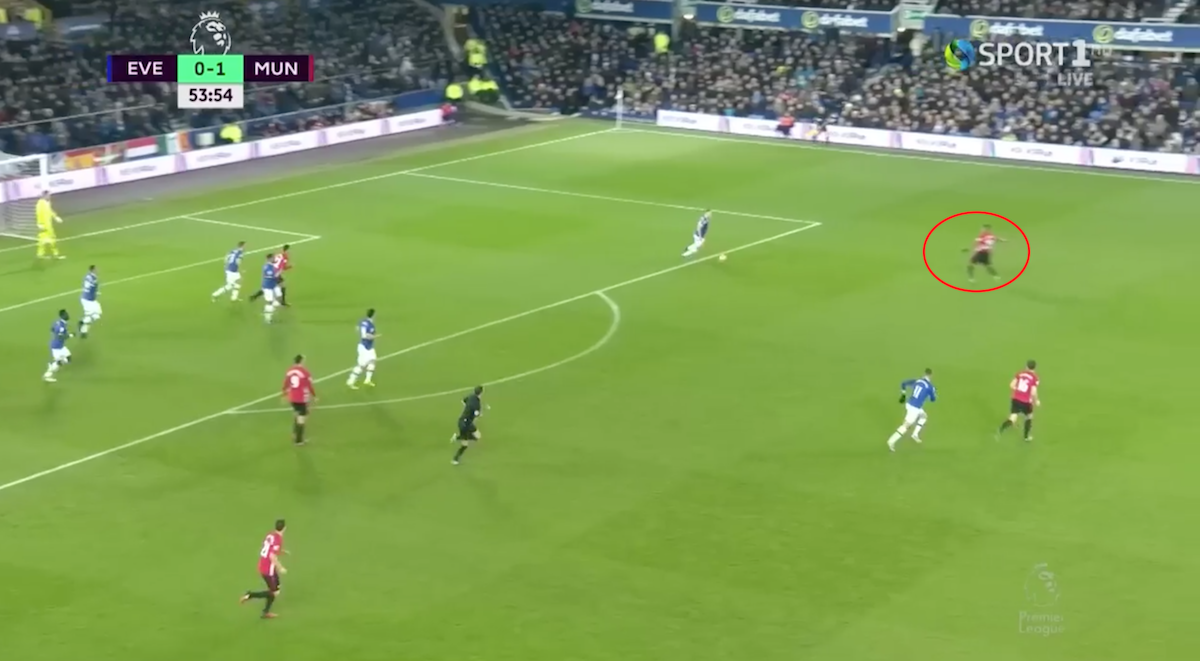 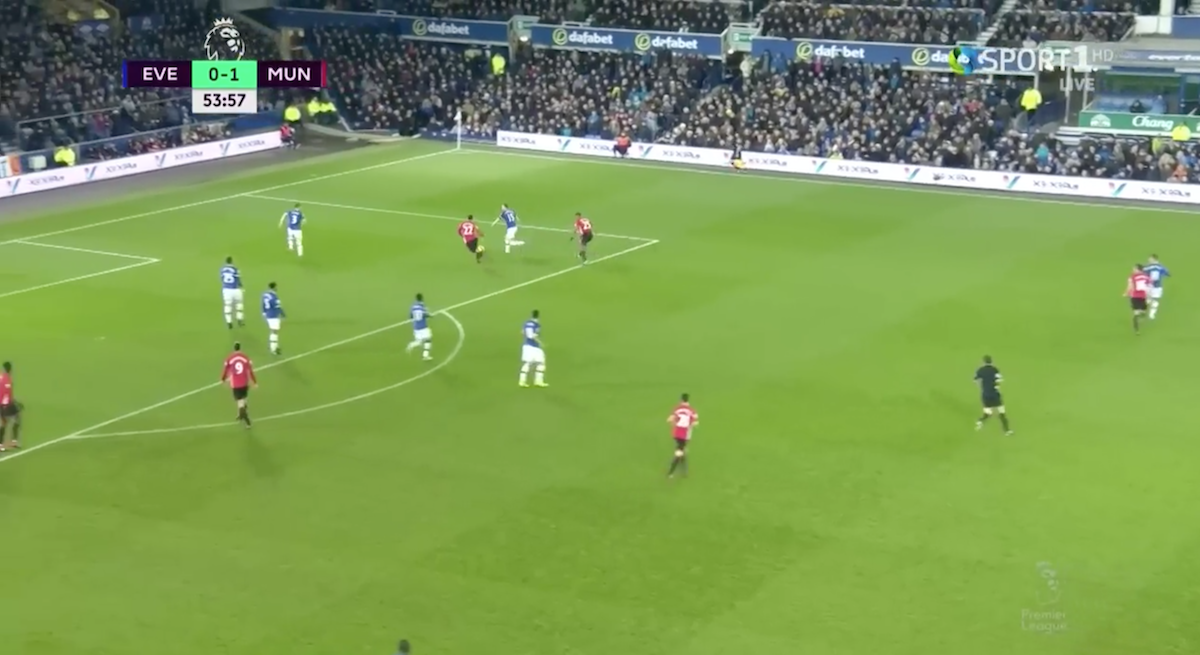 This time it’s against Everton. The home side are in possession and Valencia pushes on in an attempt to stop them from breaking. The man in possession know’s it’s unlikely he’ll beat the United player for pace or power, and there’s no easy pass on so he turns back on himself in an attempt to work an opening but at this stage Mkhitaryan has come over to assist his teammate and United regain possession in the Everton penalty area.

Valencia impresses in his adopted role but at 31-years-old it’s hard to envisage him being the long-term answer at right-back. But what he does show you is the blueprint that United should follow when identifying a potential right-back. They need to be quick, switched on, industrious and have a good delivery on them. The latter is important because United average 25 crosses per 90 minutes, second highest in the league behind Palace (26). If it’s part of your tactic then it needs to be executed properly. He attempts 1.4 crosses and 1.7 long balls per 90 minutes. Hysaj attempts just the 0.6 crosses and 1.3 long balls per 90 minutes but there are signs he has the ability and the quality to deliver dangerous balls into the area on a regular basis if tasked with doing so.

All of the following stats are per 90 minutes. Hysaj attempts 49.5 passes and completes 86% of them. He makes 1.9 tackles and 0.9 interceptions as well as winning 1.3 aerial duels. The opposition dribble past him 0.7 times and Hysaj completes 1.6 dribbles. His Manchester United counterpart, Valencia, wins 2.6 tackles and 2 interceptions. The Ecuadorian wins 1 aerial duel, is dribbled past 0.2 times and completes 1.8 dribbles. Of the 45.2 passes he attempts he completes 84.9% of them.

Hysaj made his debut for Empoli, in the Coppa Italia, aged just 17. He didn’t make his league debut for 11 months after that first appearance for the club. He eventually played his way into the starting XI and by the time he left the club in July 2015, he’d made over 100 appearances for the club. He joined former Empoli manager Maurizio Sarri at Napoli and continued his development in Naples. He’s now arguably one of the best right-backs in Europe and he’s nowhere near his prime. He manages to balance defence and attack which makes him an ideal candidate for the disciplined Mourinho. 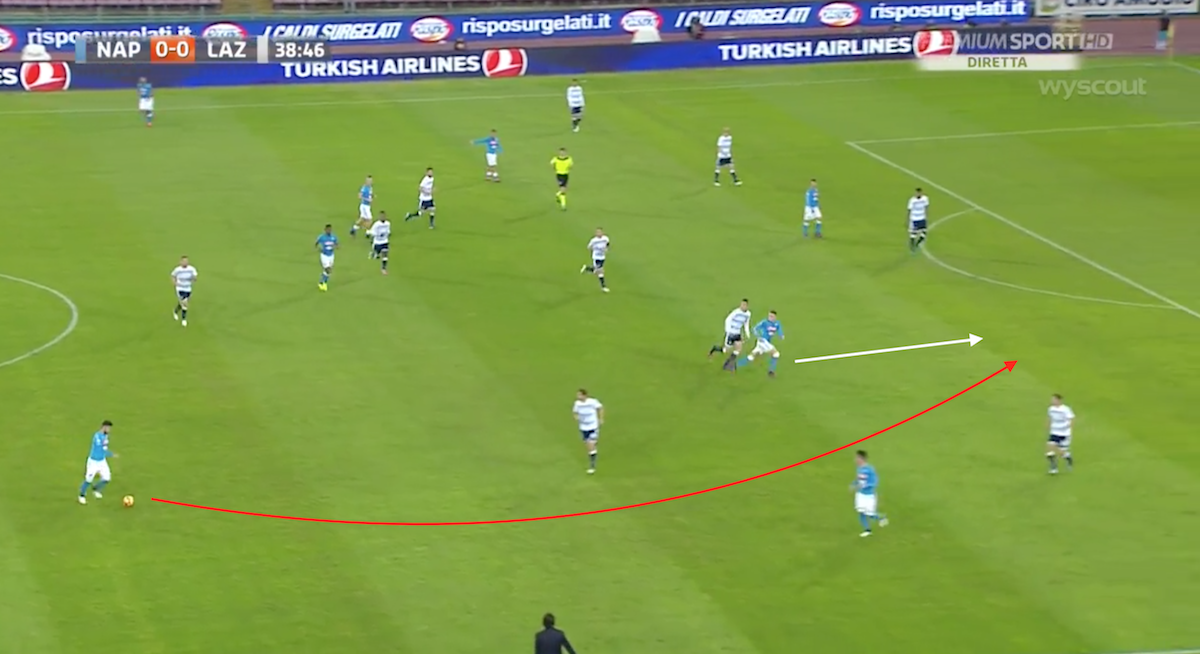 In the two pictures above you see that Hysaj isn’t afraid to get the ball forward from deep areas. Not only that though, both of these scenarios end up in goals for Napoli. He showcases two skills – his vision to see the pass and his ability to execute the pass. It’s rare you’ll see a right-back picking passes out like that. While the Premier League is a different beast to Serie A and it’s unlikely he would be afforded as much time as he was in both pictures above, the fact he has the quality to do so means he could adapt it to suit the English game.

This time around you see Hysaj get beyond the play and overlaps the man in possession. He makes up a lot of ground to stretch the Pescara back four which results in the left-back pushing out to close him down and leaving Napoli 2 v 2 at the back post. Hysaj doesn’t just loft the ball into the area, he whips it across the face of goal and it results in a simple tap in for the man at the back post. It’s the sort of tactic United use with the wide attackers looking to support Zlatan Ibrahimovic centrally. With quality delivery coming in from the wide areas, goal scoring chances will be on offer in abundance.

He’s not just effective going forward. Defensively he’s solid in the air and very confident when defending 1 v 1. In the above two pictures you can see how the Pescara player initially isolates the right-back and he does get away from him. Just as he’s about to put the ball into the penalty area Hysaj recovers. The Napoli defender effortlessly brushes the player off of the ball and calmly plays it out as Napoli look to start another attack. There was no rashness in his game. He didn’t lunge in and when he’d regained possession he didn’t just look to get rid and potentially lose possession. He showcased his intelligence and his composure.

Is £20 million really that much for a player that, if all goes to plan, will be a regular in your starting XI for the next decade?