It was confirmed last week that Bayern Munich had exercised their option to sign on-loan winger Kingsley Coman from Juventus on a permanent basis.

The 20-year-old Frenchman has been on loan at the Allianz Arena from the Italian champions for the past two seasons, so the Bavarians know exactly what they are getting.

“Kingsley Coman is an important building block for the future of our team, so we decided to take the option,” chief executive Karl-Heinz Rummenigge told the club’s website.

“Kingsley is a hopeful player with great potential. We are convinced that he will help us in the coming years.”

The player himself has always been clear about his desire to remain with the Bundesliga champions beyond the period of his loan deal, telling Kicker last year: “I would like to stay. When I arrived, it was my intention to stay for a longer period. Bayern Munich are one of the best teams in the world and I want to play here for many, many years.”

Despite the fact that Bayern have now tied him down, The Times reported last week that Coman remains a Manchester Ciy transfer target. Pep Guardiola, a fan of the player from their time together in Munich, will reportedly sanction a £50million bid for the youngster this summer.

Tempting as that offer may be for Bayern, they would be reluctant to part ways with Coman as the 11-cap France international has been tipped for a bright future at the club.

read more: Philipp Lahm – Farewell to the most intelligent player in the world

An injury picked up while representing France at last summer’s European Championships ruled the youngster out for several months at the beginning of the 2016/17 campaign, and he has largely been confined to a substitute’s role since his return.

However, Coman is unquestionably a gifted player with plenty of potential and room for growth. With long-time occupants of the Bayern wings Franck Ribéry, 34, and Arjen Robben, 33, approaching the twilight of their respective illustrious careers, is the French youngster good enough to step into their boots?

We’ve delved into the statistics to see how Coman compares to his veteran team-mates.

The current Bayern squad is perhaps the most talent-rich in world football. Few teams can boast as many genuine world class players in as many positions as the Bavarian giants. The left and right wings are perhaps the roles that are the most fiercely competed for, with four outstanding flankers who’d get into almost any other side battling for two starting berths.

Ribéry and Robben, though possibly a year or two out of their prime, are still excellent wingers and regular match-winners, as well as being two of the finest wide men of their generation.

Then there is Douglas Costa, a wonderfully skilled Brazilian signed from Shakhtar Donetsk two years ago, who has dazzled fans inside the Allianz Arena with his thrilling dribbles and mesmeric trickery.

So it’s fair to say that, although an incredibly gifted winger in his own right, Coman has his work cut out to crack Carlo Ancelotti’s starting XI on a regular basis. He does, however, have age on his side, six years younger than Costa and more than a decade Ribéry and Robben’s junior. 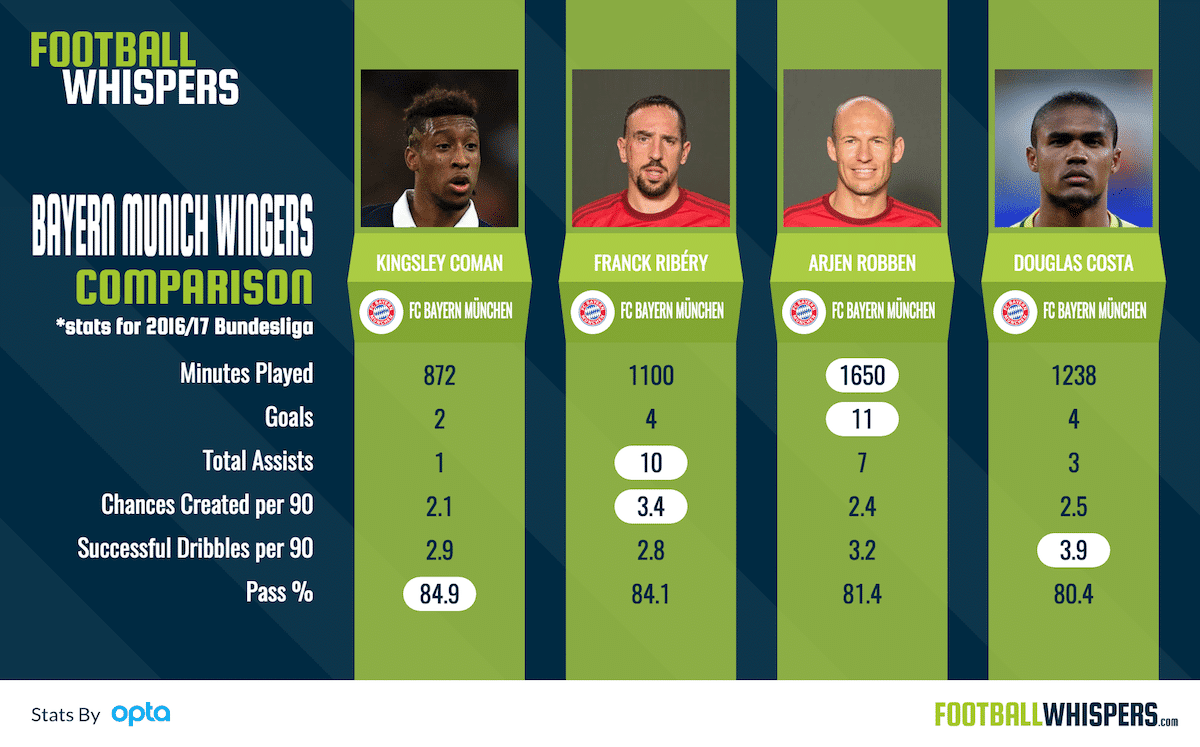 Coman has just two goals to his name so far this season, both of which coming by virtue of a cameo appearances from the bench in the 8-0 thrashing of Hamburg in February. Having played 827 minutes in the Bundesliga from nine starts and nine substitute appearances, that gives the Frenchman a less than flattering return of a goal every 413.5 minutes.

Of the four wingers, Robben is by far the most prolific, adept as he is at coming in from the right flank and bending the ball into the far corner of the goal with his stronger left foot. His return of 11 league goals has come at a rate of one every 150 minutes.

Ribéry and Costa have both found the net four times in the Bundesliga in 2016/17, although the former Marseille star, having played 1100 minutes to the Brazilian’s 1238, has been a little more efficient with a goal every 275 minutes compared to the No.11’s rate of one every 309.5 minutes.

Robben’s return is especially impressive and he has carved out somewhat of a niche for himself as a goal-scoring winger during his time at Bayern. But even when compared to Ribéry and Costa, Coman falls some way short in this department.

When it comes to creating goals for team-mates, Ribéry leads the way with 10 Bundesliga assists to his name at a rate of one every 110 minutes. Robben is next with seven at 309.5 minutes per assist.

Coman’s solitary assist for the campaign so far again sees him trail his positional rivals, as Costa’s four assists, although not hugely productive, makes him a far more regular creator than the 20-year-old.

It’s a similar story when analysing each man’s chances created per 90 minutes stats, too: Ribéry’s 3.4 is the top return and Coman’s 2.1 ranks him last.

With Ribéry and Robben now well into their 30s, Coman is quicker across the turf than the pair, and it would be a close race between him and Costa were they to compete in a sprint. The Brazilian is a more prolific dribbler, however, completing a whopping 3.9 take-ons per 90 minutes – second only to Borussia Dortmund’s Ousmane Dembélé (4.7) in the Bundesliga this season.

All of this goes to show that Coman still has some way to go before he can truly be considered the heir to Robben or Ribéry on the flank at the Allianz Arena. But the former Paris Saint-Germain youngster has the potential to reach that level in the near future.