Reigning champions Juventus, a team whose dominance has broken records, have a squad that is markedly different to the one that sealed a sixth consecutive Scudetto mere months ago.

The departure of central defensive leader Leonardo Bonucci to rivals AC Milan was seen by many as a seismic shifting of the tides.

In selling the player, the titleholders lost an individual representation of their latest, perhaps greatest, era to an opponent historically their equal and currently back on the up.

In truth, the gap between Juventus and the rest had been narrowing anyway.

In Massimiliano Allegri’s first season in charge – 2014/15 – they won Serie A by an eye-watering 17 points. No-one could get near them.

Then, thanks to a Napoli resurgence, the 2015/16 championship came with a nine-point advantage. Last season, however, the Bianconeri finished just four points clear of second-placed Roma.

Juventus’ buying and selling has left them with some important questions to answer: Can Daniele Rugani successfully fill Bonucci’s shoes or will they switch to a back four? Will new arrivals Federico Bernardeschi and Douglas Costa play together? If so, how? And, amid mounting speculation of Barcelona interest, can they keep hold of Paulo Dybala?

What matters at the moment is not necessarily whether or not the champions can answer these questions, but the simple fact the questions are worth asking in the first place.

For the first time in years, their domestic supremacy appears uncertain. Here, we assess four of their primary challengers.

Inter’s 2016/17 campaign was spectacular for all the wrong reasons. Their historic misfortune was almost comically evident throughout, from the Frank de Boer debacle to the Stefano Pioli revival and end-of-season drop-off.

Now, however, they have a head coach to be truly confident in. Luciano Spalletti returned to Roma in January 2016 and proceeded to steady the Giallorossi ship with aplomb.

Constantly overshadowed by the lingering presence of a Francesco Totti nearing the end of his storied career, Spalletti nonetheless managed to implement effective tactics and ensure positive results.

At times the football played during his second spell at the helm was breathtakingly good, and Inter will be hoping his vision and Serie A knowhow will be just the tonic for an underperforming squad.

While rumours continue to abound regarding Manchester United target Ivan Perisic’s future, Spalletti has a strong group of players to work with.

Miranda is a solid, experienced centre-back to build around, while the midfield features plenty of pace and dynamism thanks to Roberto Gagliardini, Antonio Candreva and Joao Mario. Up front, meanwhile, Mauro Icardi is one of the league’s most clinical finishers.

New additions Milan Skriniar and Borja Valero provide solutions in vital areas – the former refreshes an ageing, mistake-prone back-line; the latter brings control and penetration to a midfield lacking creativity. They will improve the team, but a title challenge could be a step too far.

One of the biggest signings of the summer was Roma’s capture of Monchi, Sevilla’s former sporting director and highly respected transfer market specialist. His appointment preceded the arrival of promising young coach and former Roma player Eusebio Di Francesco in the dugout.

This change in direction is unquestionably exciting as far as the long term is concerned. The club’s messy approach to the transfer market should be sorted, while new ideas will be implemented on the pitch.

However, in the short-term there may be a slight decline in the team’s chances of a Scudetto challenge.

Monchi appears intent on copy-and-pasting his Sevilla strategy onto a team that regularly finishes second or third.

This may not work wonders initially, with the loss of talent this summer potentially impossible to deal with – Antonio Rudiger, Mohamed Salah and Wojciech Szczesny are all significant departures.

The signings are intriguing, if not sensational. Gregoire Defrel and Lorenzo Pellegrini follow Di Francesco from Sassuolo and will fit his 4-3-3 system, while Aleksandar Kolarov, Maxime Gonalons and a host of young talent add depth.

For a title challenge to occur in 2017/18, Roma need immediate results. But, ultimately, their project seems more focused on the future.

Milan’s summer transfer window activity has resembled something from the Football Manager series, with top class talent manifesting itself at the club’s headquarters with a consistency that is jarring for those that have watched the team play in recent years. Gone are the days of free transfers and ageing former stars – the Rossoneri are back. 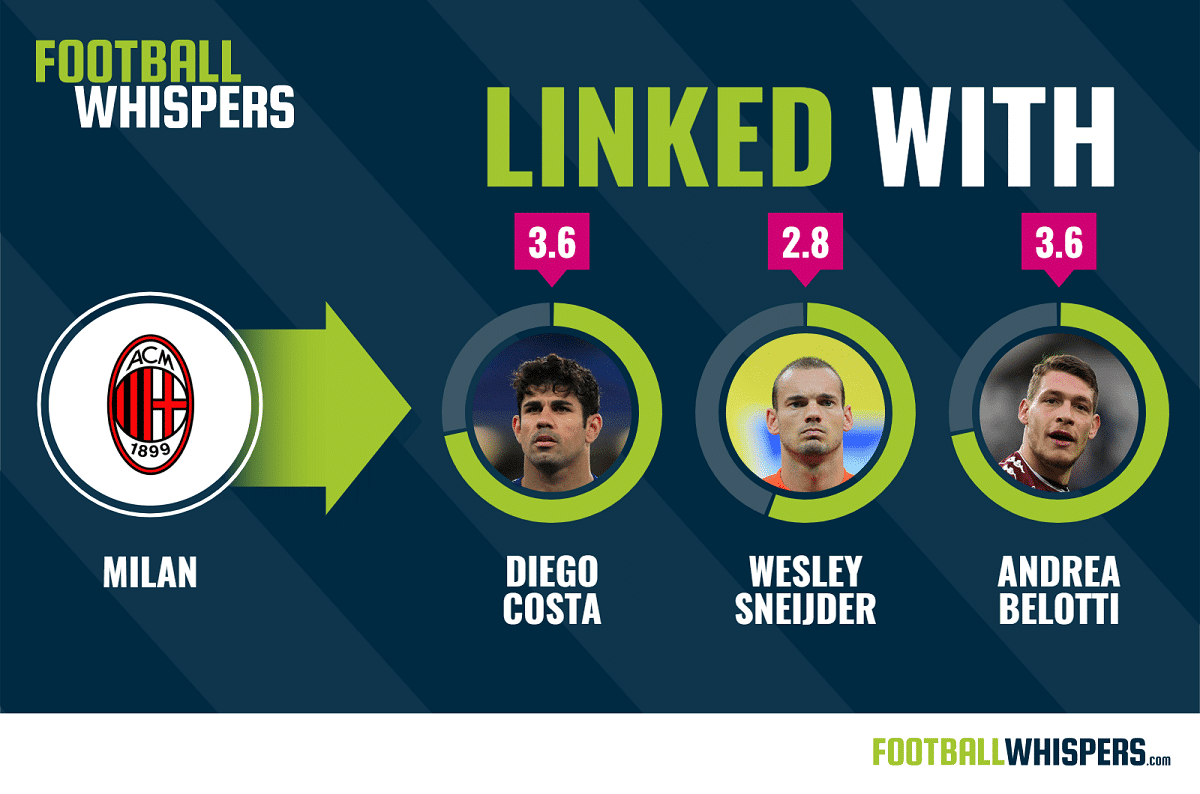 Thanks to a takeover, Milan have had plenty of money to play with and they have wasted no time in spending it.

As if to prove a point to the rest of Serie A, the signings of Franck Kessie, Ricardo Rodriguez and Andre Silva were announced within a ten-day period. They were joined by Mateo Musacchio, Lucas Biglia, Hakan Calhanoglu, Andrea Conti, Fabio Borini and Bonucci.

Vincenzo Montella did a good job on limited resources in his debut season as head coach, making the most out of an exceptional crop of young talent including Gianluigi Donnarumma, Alessio Romagnoli and Tottenham Hotspur target Suso.

Those players, along with Giacomo Bonaventura, should play important roles going forward, but now they form part of an all-star cast.

Now, Milan can choose between back three and back four, a luxury they simply couldn’t consider last term. They must also decide precisely which of their variety of attacking midfielders to play, and in what shape.

They have tactical options, meaning the football should improve both in entertainment and effectiveness. However, while their spending has been remarkable, it could take time for all the new players to adjust to those already present in the squad and vice versa

Change has been afoot at almost every one of Serie A’s top clubs. Milan took one of Juventus’ best players, Roma completely overhauled their strategy, and Inter Milan brought in another new head coach. Napoli, by contrast, have been a picture of serenity amid the overarching chaos.

Maurizio Sarri’s side have been responsible for some of the most sumptuous, aesthetically pleasing football seen in Europe over the last two years.

Their vertical, fast passing, position-rotating style has led to beautiful goals and innumerable highlight clips, but it has also brought them closer to the Scudetto.

The 2017/18 season may see them cash in on their consistent approach both on and off the pitch. Not only do they have a clear, unchanging system and style, but they possess an exceptional squad eager for success.

Captain Marek Hamsik leads from midfield, while a front three of Lorenzo Insigne, Dries Mertens and Jose Callejon is one of the most productive on the continent.

And, with Arkadiusz Milik back to full fitness, their goals total should only increase. At the back, Kalidou Koulibaly’s combination of technical and physical attributes make him one of the finest ball-playing centre-backs around today.

Out of all the contenders to Juventus’ throne, Napoli are the most prepared to challenge in 2017/18.