For their first season back in the Scottish Premier League since demotion to the old Third Division, finishing third and securing a place in next season’s Europa League was a respectable achievement for Rangers.

However, having started the season as (distant) second-favourites for the title behind Celtic Pedro Caixinha's side, they will have been disappointed to finish nine points adrift of Aberdeen, while four defeats in five Old Firm derbies — including two 5-1 reverses — will have particularly stung.

The Gers boss knows he will have to overhaul his squad if they are to launch any sort of challenge to Brendan Rodgers’ side next season, and it looks as though Mexican midfielder Carlos Peña will be one of the first additions this summer.

The 27-year-old is reportedly on his way to Glasgow for talks over a move to Ibrox, with a three-year deal on the table for the Chivas player.

Peña scored two goals on loan at León in this season’s Mexican Premier League, but what would he add to the Scottish club?

Rangers scored 18 fewer goals than second-placed Aberdeen this term – and a whopping 50 fewer than champions Celtic – while only striker Kenny Miller reached double figures in the league. 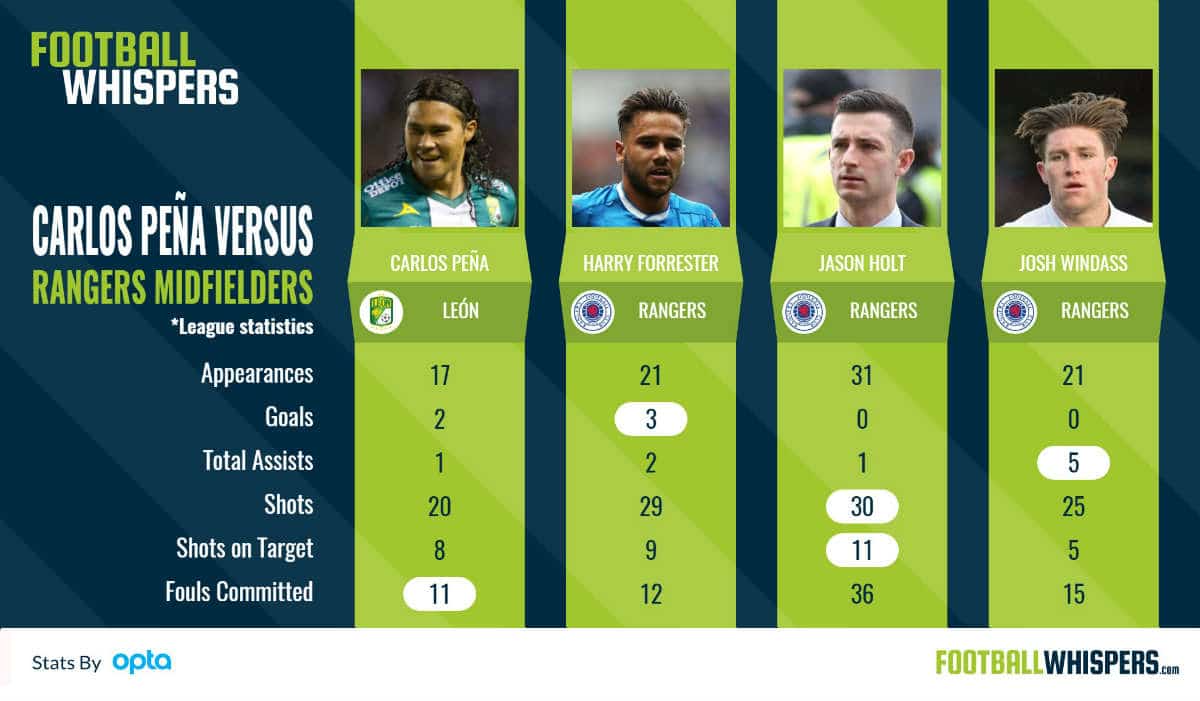 READ MORE: WHAT WOULD BRUNO ALVES BRING TO RANGERS

Carlos Peña’s tally of two goals in 17 appearances for Leon doesn’t suggest Caixinha would be buying a guarantee of goals — even if the midfielder was more prolific for Chivas last year (eight goals in 31 appearances).

Just one assist in that time isn’t a fantastic return either, but the Mexico international unquestionably has an eye for a killer ball that can unlock defences in a single moment.

In the below sequence, Peña receives the ball in the attacking third before delivering a one-touch pass that releases Carlos Guzmán who cooly slots it past the Zacatepec Siglo keeper.

The Siglo defence make it easy for Peña and Guzmán in truth, but this following sequence demonstrates an altogether more impressive pass.

Again, Peña picks up the ball outside the box, in one touch deftly lobbing the Alebrijes de Oaxaca backline to set up his team-mate — who really should do better with the chance.

However, despite an obvious technical ability that has seen him earn 19 caps for his country, all too often those through balls go astray when he tries to thread passes through gaps that simply aren’t there. Additionally, he is far too easily knocked off the ball at times, frequently in dangerous positions that lead to counter-attacks.

The midfielder has also been accused of being too slow to track back, or read the game quick enough to enable him to track back in the first place.

How he’d fare in the faster-paced and more physical SPL should be of concern to Rangers fans. Add this to the fact that Peña is completely untested outside of his native Mexico and his signing begins to look like a curious one.

Known as ‘El Gullit’ in his homeland, though due to his appearance rather than any footballing comparison with the Chelsea and Holland legend, Peña offers a raw talent that one often finds with young players plying their trade in Central or South America. But at 27, his potential might very well already have been met.

His signing might offer depth and occasional creativity to a Rangers side that lacked it at times last season, but if Caixinha wants them to move up a level close to where they used to be, the Portuguese manager should keep shopping.