In a division which contains the might of Newcastle United, Aston Villa, Leeds United, Nottingham Forest, Derby County and Sheffield Wednesday, it was a victory for the underdog on Monday as Brighton & Hove Albion clinched promotion from the Championship.

Chris Hughton's side are the first to secure their place at the top table of English football next season and will rub shoulders with the Premier League's big boys for the first time in their history.

The Seagulls' achievement is all the more impressive given they missed out on promotion last season on goal difference, with Middlesbrough clinching second spot by two goals.

When Hughton succeeded Sami Hyypiä on New Year's Eve 2014 Albion were perched precariously above the drop zone. He kept them up, finishing 20th, and remodelled the squad that summer.

The big question now is how will they fare in the Premier League?

The most impressive thing about this Brighton side is that it is greater than the sum of its parts. There are not many household names in Hughton's squad but the former Newcastle boss has constructed a humble, hard-working and attractive side and seen his approach justified.

However, the one exception is Championship Player of the Year Anthony Knockaert. The 25-year-old hails from Roubaix, famed for the Paris-Roubaix bike race which finishes on the French-Belgian border, and Knockaert's career has been every bit as bumpy.

Brought to England from Guingamp in 2012 he spent three years at Leicester City and helped the Foxes into the top flight. But after just three starts and a negligible impact he was sold to Standard Liege by Nigel Pearson.

However, Hughton saw the ability the wideman possessed and brought him back to England in January 2016. Newcastle United were reportedly keen to sign him last summer but the Seagulls stood firm and Knockaert duly responded with 15 goals and a starring role en-route to promotion. 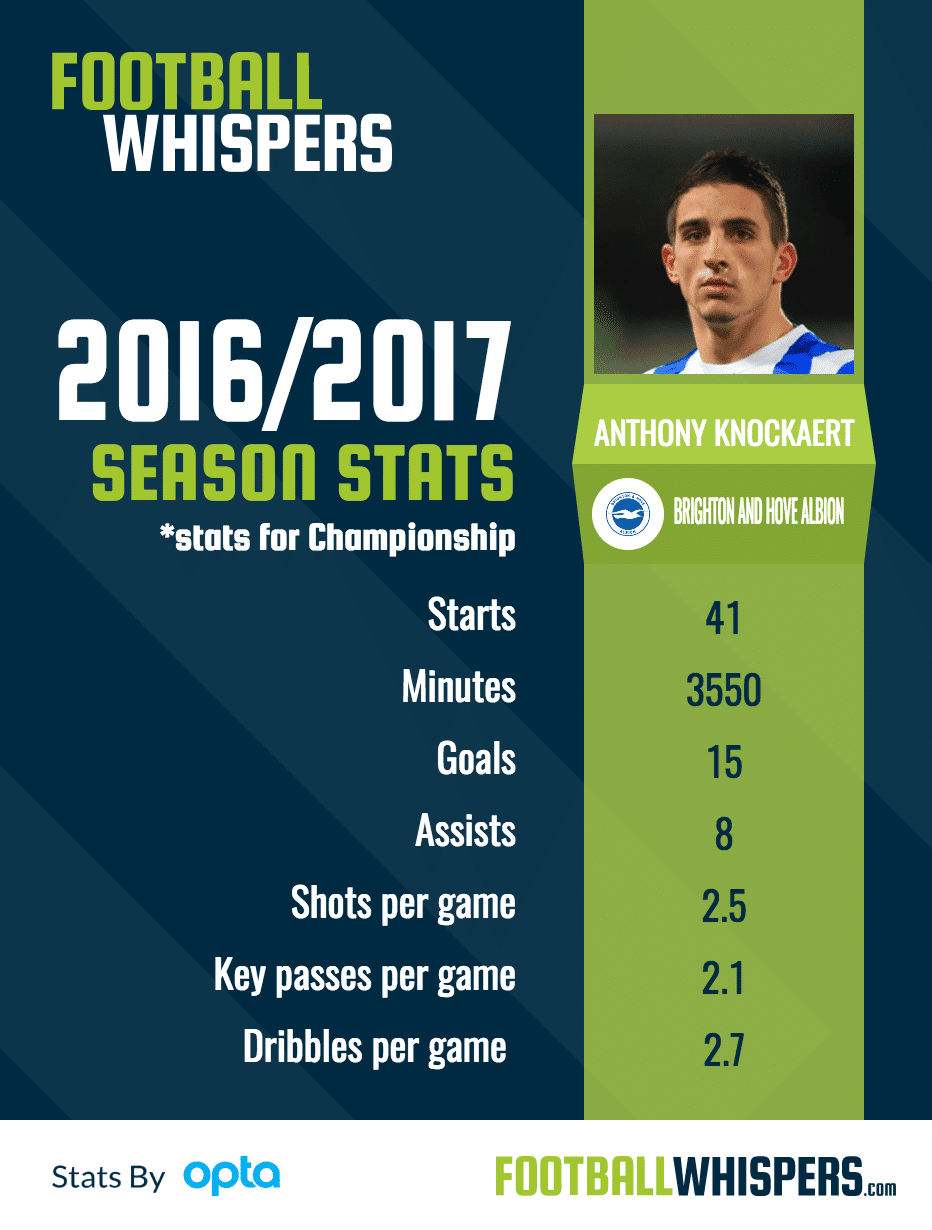 The Frenchman comes out on top at the AmEx Stadium in all of the above statistics, even taking more shots than 22-goal top scorer Glenn Murray. However, what is more impressive is the level of improvement since his last season in the Championship with Leicester. 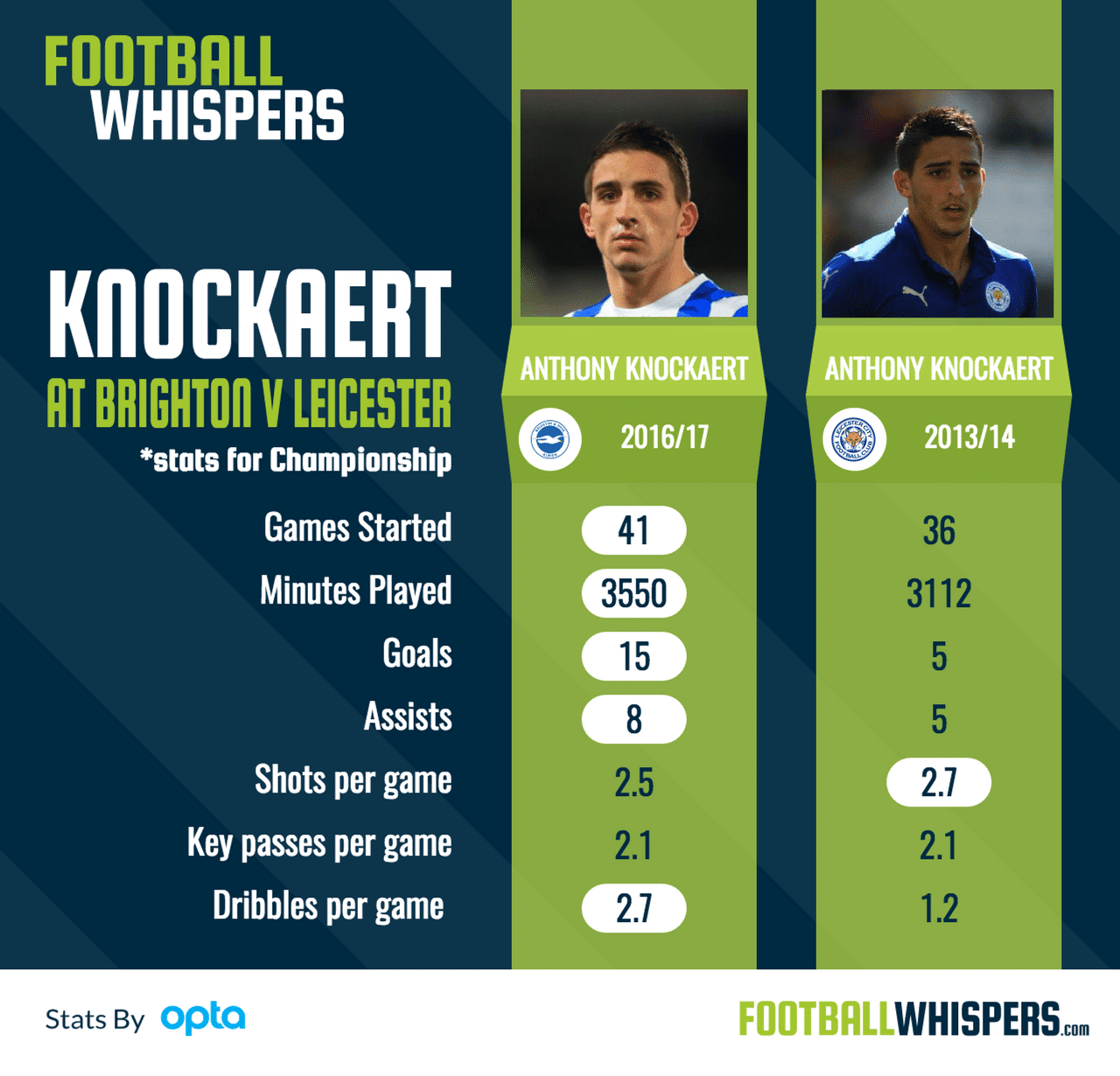 A lot of that success has been down to the belief and support of his manager. It has not been an easy season for Knockaert. His father, Patrick, died aged just 63 in November following illness. That the forward has produced the best season of his career despite that tragedy is, in no small part, down to the environment at Brighton.

Hughton took his squad to France for the funeral of the winger's father, a touch of class which Knockaert appreciated immensely.

“If I was playing for any other club in the world I don’t think they would have done that,” Knockaert told the Daily Mail. ‘Coming all the way was something I will never forget.

“I still don’t know how to say thank you to them. Now, for me they are not just team-mates but friends for ever and this football club, I owe them a lot.

“That's why I give every single bit of my life on the pitch and they deserve it because this club is something special and you cannot see that in any club in the world.”

Knockaert's challenge now will be to replicate his stunning form in the Premier League. He was afforded just 330 minutes of league action with Leicester three years ago but has matured and improved since. Much of Brighton's hope rests on his shoulders.

As Middlesbrough have proven this season – by their failure to do so – one of the most important ingredients in the top flight is scoring goals. Keeping clean sheets alone is not enough.

On top of Knockaert (15) and Murray (22), Albion have two further players, Tomer Hemed (11) and Sam Baldock (11), who have reached double figures this season. They are the division's third-highest scorers with 72 goals and have 12 different scorers in their squad.

For Hemed and Baldock the Premier League is uncharted territory. While Knockaert (0) and Murray (11) have struggled to replicate their success of the second tier after promotion.

Murray, 33, rejoined Brighton on loan this season after five years away at Crystal Palace, Reading and Bournemouth. The forward is not the prettiest on the eye but he has scored goals wherever he has been.

Despite limited chances in the top flight he has managed a goal every 186.9 minutes. Roughly a goal every other game – not a bad record for a player who has never been first choice in the Premier League and has played for clubs battling to avoid the drop. 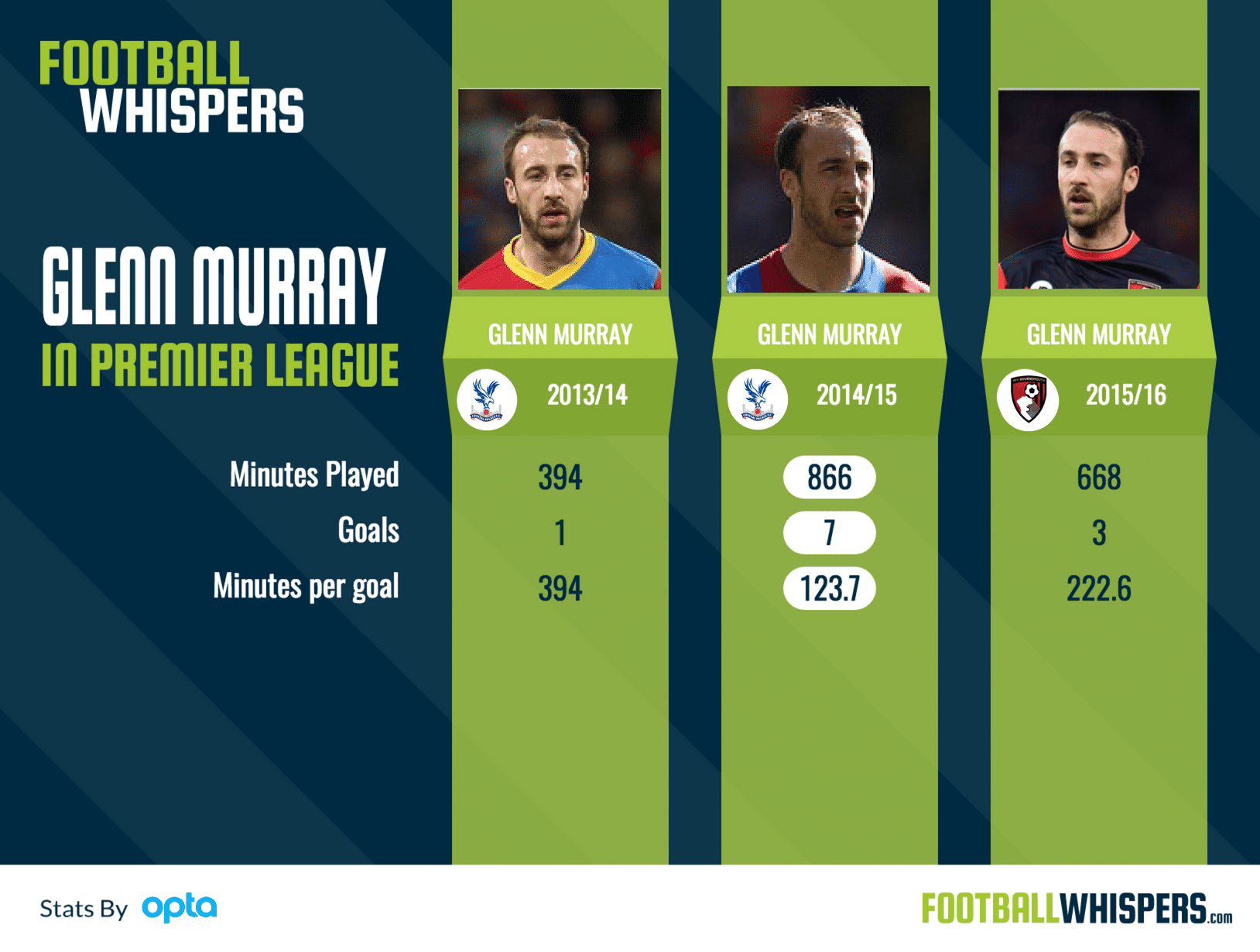 READ MORE: 5 MUSTS FOR NEWCASTLE UNITED IF THEY WON PROMOTION

However, a new striker to supplement Murray's goals will be high on Hughton's shopping list this summer. The Maryport-born hitman's statistics in the Premier League suggest he has never been a regular scorer.

His size and strength mean Murray can hold the ball up and bring others into play but whether the Seagulls will persist with two up front next season remains to be seen.

Brighton's attacking instincts have not left them open at the back, however. With just 36 goals conceded in 42 games the Sussex side have the meanest defence in the Championship. Much of that is down to the consistency with which Hughton has been able to select his first-choice back four.

Dunk has long been touted as one of the best centre-backs outside the Premier League. The 25-year-old's partnership with £4.5million summer signing Shane Duffy has been integral to Brighton's watertight defence. 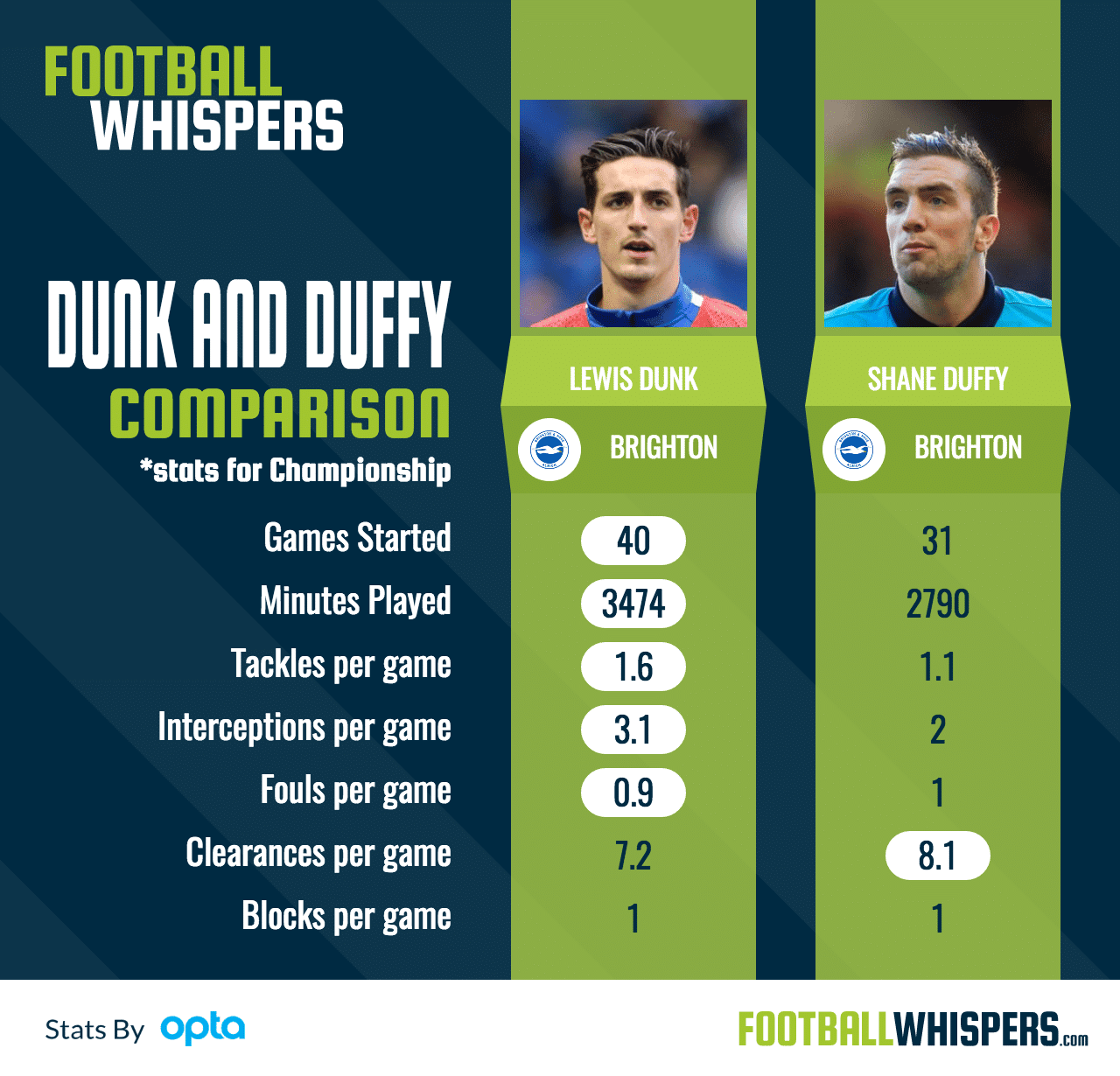 The duo come out on top for blocks per game (1) at Brighton while Duffy's 8.1 clearances are the most of any Seagulls player. Dunk (7.2) is just behind and is also second for interceptions with (3.1).

Behind the back four Brighton have the best goalkeeper in the division. David Stockdale has faced 120 shots in 42 games this season, saving 86. That gives the former Fulham youngster a save percentage of 71.6 – more than any other Championship keeper to have made more than 25 appearances. 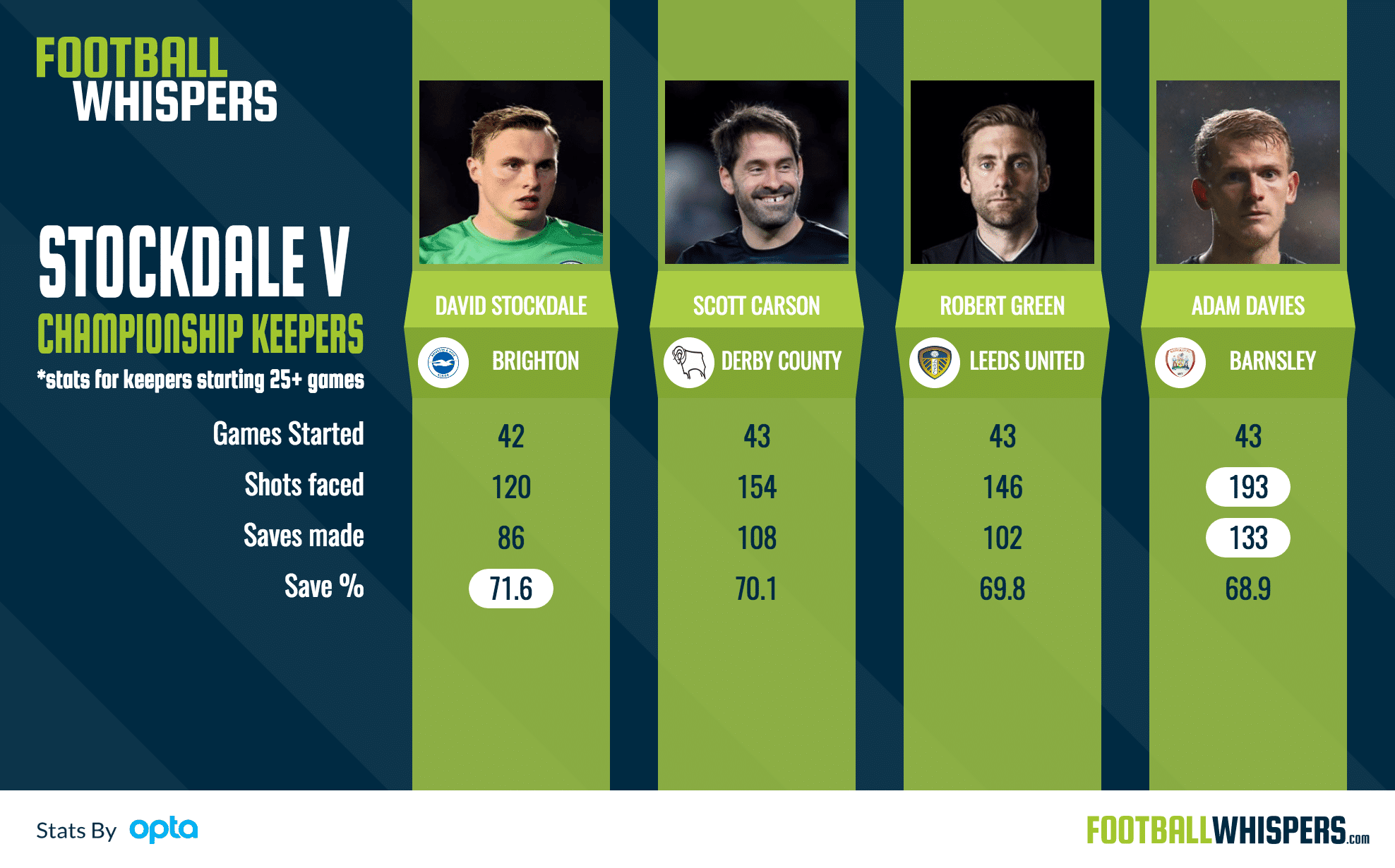 Discarded by the Cottagers in 2014, the Leeds-born stopper has flourished at Brighton where he has been the Seagulls' first choice ever since. Like the rest of his Brighton team-mates he has proven himself to be too good for the Championship and will relish another crack at the top flight.

Hughton's side are solid defensively, effective going forward and have several excellent individuals throughout the spine of the team – which is the strongest aspect.

Naturally, there will need to be some summer additions and certain players will not be of the calibre required to continue the journey. But Hughton has proven himself in the transfer market in constructing much of this squad.

Throw in his organisational, tactical and motivational skills and the Seagulls could sore in the Premier League.