Barnet have been one of football’s yo-yo clubs in recent years – a dominant force in the National League but unable to kick on and make their mark when competing at League Two level.

Now back in the fifth tier following a final-day relegation at the end of 2017/18, can the Bees bounce straight back to the Football League at the first time of asking?

Bees fans were left reeling from manager Martin Allen’s departure to Chesterfield in the summer – the man who led Barnet to the National League title in 2014/15 almost pulled off an improbable great escape from relegation last season, only to be denied by other results going against them on the final day of the campaign.

Allen announced Barnet’s retained list in June, hinting that he may extend his fifth spell at the club, only to depart for the Spireites a matter of days later.

Barnet supporters needn’t have worried. Chairman Tony Kleanthous acted quickly to replace Allen with a man who has enjoyed even greater success at this level, in the form of 68-year-old coach John Still.

The vastly experienced manager had previously enjoyed a fruitful stint with the Bees from 1997–2000, leading them to the League Two play-offs on two occasions. The majority of his achievements have come at National League level though, winning the title on three occasions, with Maidstone United, Dagenham & Redbridge and Luton Town.

Still also took the Daggers into League One for the first time in their history, after beating Rotherham United in the play-off final at Wembley in 2010 – perhaps the crowning glory in an impressive 42-year managerial career. The Bees faithful will be hoping that there’s room for one more trophy in Still’s cabinet, in what could be his final coaching role before retirement. 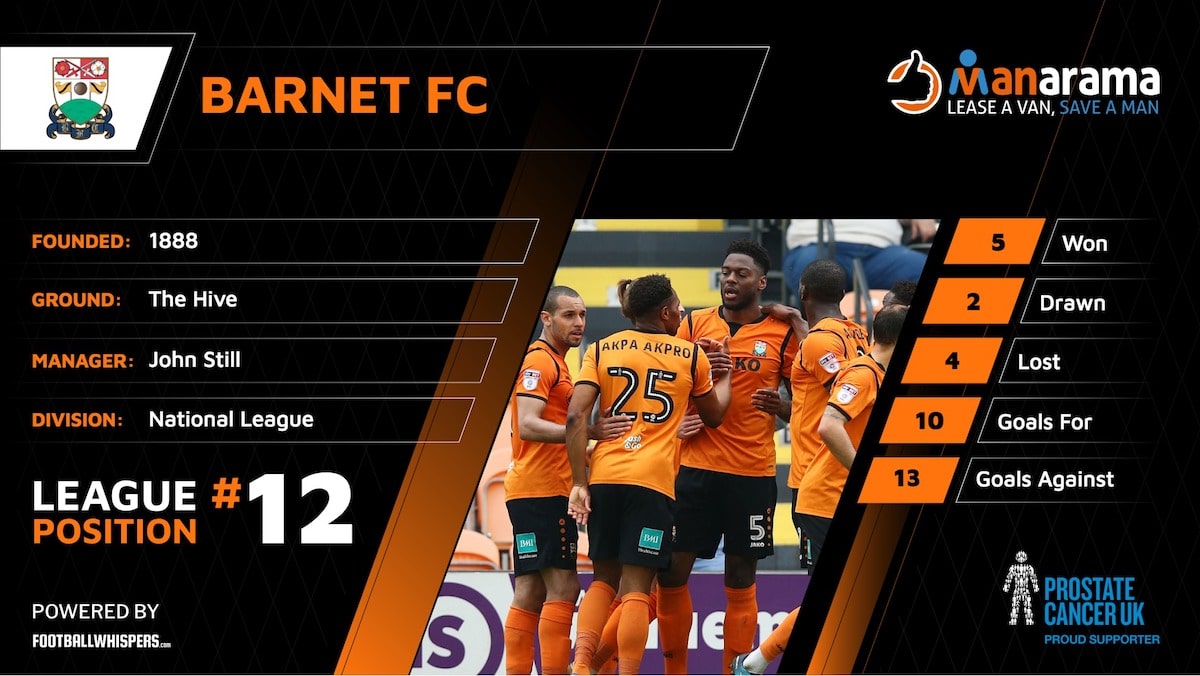 Talismanic striker John Akinde departed The Hive following last season’s relegation, joining Lincoln City for a rumoured six-figure fee. While the powerful forward’s goals – 90 in 177 matches – will undoubtedly be missed, the club brought in 12 new recruits to strengthen the squad for the current campaign.

Five of those additions have arrived from Still’s former club Dagenham & Redbridge, as Barnet capitalised on the Daggers’ financial issues to poach some of their brightest stars. Goalkeeper Mark Cousins was last season’s Player of the Year at Victoria Road and has looked an assured presence between the sticks so far this season, while central defender and former Dagenham captain Craig Robson has slotted seamlessly into the Bees’ backline.

Byron Harrison is Barnet’s new No.9, having joined from fellow fifth-tier side Barrow – the striker scored an impressive 32 goals in 67 games for the Bluebirds, and compliments a squad that is packed full of talent for National League level.

The issue for Barnet has been getting all of that quality on the pitch at any one time. The Bees have endured a horrendous run of injuries dating back to the beginning of the last campaign, when 11 first-team players were out of action for a match against Coventry City in October 2017.

Luck has continued to desert the north Londoners this season, with star winger Mauro Vilhete, forward Simeon Akinola and defensive colossus Ricardo Santos all out of action until some time around December.

New recruits Andre Boucaud and Mark Reynolds have yet to start a competitive game for Barnet due to injury, while the prolific former Maidenhead United striker Dave Tarpey has been out with a cruciate ligament injury since September last year. The Bees certainly have a squad capable of achieving promotion if they can keep those players off the treatment table for the second half of the campaign.

John Still is renowned for discovering talent that is hiding in the depths of the non-league game, having unearthed the likes of Marlon King, Dwight Gayle, Craig Mackail-Smith and Paul Benson during his previous spell at Barnet and three stints at Dagenham and Redbridge.

His latest protégés are Jack Barham – a striker who scored 37 goals at Greenwich Borough last season – and forward Josh Walker, who found the back of the net 17 times for Hendon in 2017/18. Both players have already broken into the first team at The Hive, scoring four goals between them in the opening 11 matches.

Barnet’s academy is also in great shape, with a whole host of youth-team graduates making first-team appearances since the 2015/16 campaign.

The Bees’ matchday squad for their recent London derby against Leyton Orient only included one player over the age of 30, with six academy graduates making it on to the field at various stages of the match. Midfielders Jack Taylor and Wesley Fonguck are two of the club’s hottest prospects, while 16-year-old full-back Martyn Box is one to watch after making his first-team debut earlier this month.

The Bees’ endured a disastrous start to this season, as their newly assembled team struggled to gel and were hampered by a host of injuries to key personnel.

But after amassing just two points from their opening five matches, things have started to turn around for John Still’s men. A sequence of five consecutive wins has pushed Barnet up the table, only for that run to be halted by high-flying Leyton Orient in their most recent outing.

If the Bees can keep their best players fit then the club’s fortunes can only improve, and a return to League Two at the first time of asking is a distinct possibility.

But the National League is a highly competitive division with more settled teams than the north Londoners – a playoff place might be a more realistic expectation this season, ahead of a title challenge next time around.