Cambridge will host Southampton on Tuesday, August 23rd, in the next round of League Cup. If you want to know more about this game, check our preview of the match and our free betting tips.

Our favourite betting picks and predictions for Cambridge vs Southampton

If you are not sure what is the best bet for Cambridge vs Southampton, check our top betting tips for this duel right here:

Clearly, the guests are the favourites, but we would avoid betting on the winner here and focus on goals since we expect to see at least three goals in this game. After all, Southampton averaged 4.00 goals per game so far in Premier League, while Cambridge averaged 2.40 goals per game in League One this season.

Since we can see three or more goals being scored in this match, we can also see both teams scoring. Southampton's defense is pretty vulnerable and with them likely making many changes to the starting lineup, we don't see why the home team can't score here.

After all, both teams scored in all games that Southampton played in Premier League so far, while the same thing happened in three of the five League One games played by Cambridge until now.

Before these two teams meet on Tuesday, let's take a better look at them and their recent form, news, and other important things:

With two wins, one draw, and two losses in the first five games of the new season, Cambridge is currently in the tenth place in League One standings with seven points. That is a solid start for the team, whose ambitions are pretty much ending the season in the middle of the table in the third rank of English football.

Meanwhile, the team will be without Fejiri Ohenabirhie through injury, but the rest of the squad is ready to go.

After another quiet transfer window, the expectations are pretty low for Southampton in Premier League and many see them fighting for survival. However, the team had a solid start of the new season with one win, one draw, and one loss in the first three rounds, including the exciting turnaround against Leicester over the weekend.

In addition to likely changes to the starting lineup to give some rest to the key players, Southampton will also miss injured Tino Livramento and Romain Perraud.

The latest odds and stats for Cambridge vs Southampton

If you are looking for the top Cambridge vs Southampton odds, take a look at our list of odds taken from the main UK bookies:

Frequent questions for Cambridge vs Southampton 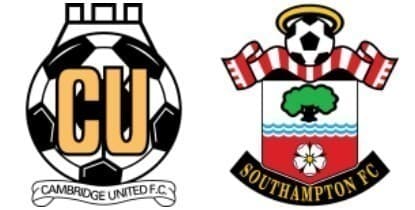