Cambridge pulled off the shock of the round last time out as they beat Newcastle 1-0. Can they progress beyond another team from a higher league? Find out with our Cambridge vs Luton match preview with free tips, predictions and odds mentioned along the way.

Cambridge's win over Newcastle in the previous round triggered some momentum in their League One campaign as they won four on the spin. Unfortunately, they've played an extra three games since then and have won none of them with their last match seeing them comfortably beaten by Bolton. Luton meanwhile arrive having taken 10 points from the last 15 available in the Championship and on a three game unbeaten run. What's more, with Luton not realistically challenging for promotion to the Premier League they have little reason to rest and rotate. Combine that with the fact that hosting Luton is a real step down from the Newcastle win and it feels very much like Cambridge's story has already been written – for this season, at least.

We might be backing Luton to progress as the higher ranked side of the two but that doesn't mean we believe it will be a countryside stroll for the Hatters; it won't be. Cambridge have home advantage and showed in the last round how resilient they can be; that's exactly how they'll approach this match too. On top of that, form shows under 2.5 goals is a reasonable shout as well. Three of Cambridge's last four have come up short of the 2.5 mark with four of Luton's last five also failing to reach three goals. Three of the last five meetings between these sides have come up south of 2.5 goals as well!

Check out the key stats & form for Cambridge vs Luton

Cambridge vs Luton is a game that's been played in the lower leagues more often than not over recent history. Not this time though with at least one of the duo putting their hat in the ring for a potential money spinning FA Cup tie against a big boy in the next round.

Cambridge earned a lot of fans for their win up at St James' Park in the previous round for a) the result but, more importantly, b) their performance. They'll need to deliver a display with the exact same endeavour here and, even then, they'll need lady luck on their side too.

Luton cannot go anywhere of note in respect of their league this season – not realistically at least. With that in mind, the Hatters should be approaching this game with every intention of taking the game to Cambridge. They should set up to win the game and then rest players once the hard yards are run. Will they?

A brief FAQ ahead of Cambridge vs Luton 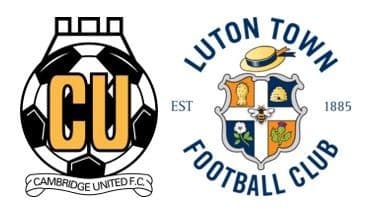