He's been strongly linked with a move to AFC Bournemouth, but Everton's Dominic Calvert-Lewin is only just getting started at Goodison Park.

It was just two years ago he left Sheffield United for the Premier League, having earned his crust in the lower divisions of League One and Two on loan. Fast-forward to 2018 and Calvert-Lewin has accelerated and established himself as a top-flight player. Given the chance, he has big potential to be a star at Everton – if they don't sell him.

He doesn't just score goals, he does a lot of work off the ball and moves into spaces in the final third, dragging defenders out of position and looking to also gain an assist.

Calvert-Lewin has recently turned 21 and it seems he has a good future ahead of him. Here, Football Whispers explains why Everton must keep hold of him and give him a chance to progress further next season.

Last season, Calvert-Lewin was given the chance to show what he could do on a regular basis. The Sheffield-born man featured a total of 44 times in all competitions, netting eight goals.

The versatile forward outperformed his expected goals (xG) by 1.26 goals over the entire season and he was an invaluable asset to both Ronald Koeman and Sam Allardyce.

With Wayne Rooney heavily linked with a move to Major League Soccer, Everton should be in no rush to sell Calvert-Lewin.

Cenk Tosun took time to adjust to English football and finally showed what he's capable of last season with five goals – the same as Calvert-Lewin in Premier League matches.

For a start, the 21-year-old fared a lot better aerially than many expected despite his slight frame, winning more battles than Rooney and Tosun, with 6.16 per 90 minutes. In fact, he was ranked inside the top ten in the Premier League. It's not the first thing that springs to mind when thinking about Calvert-Lewin but it shows he has a lot of strings to his bow. 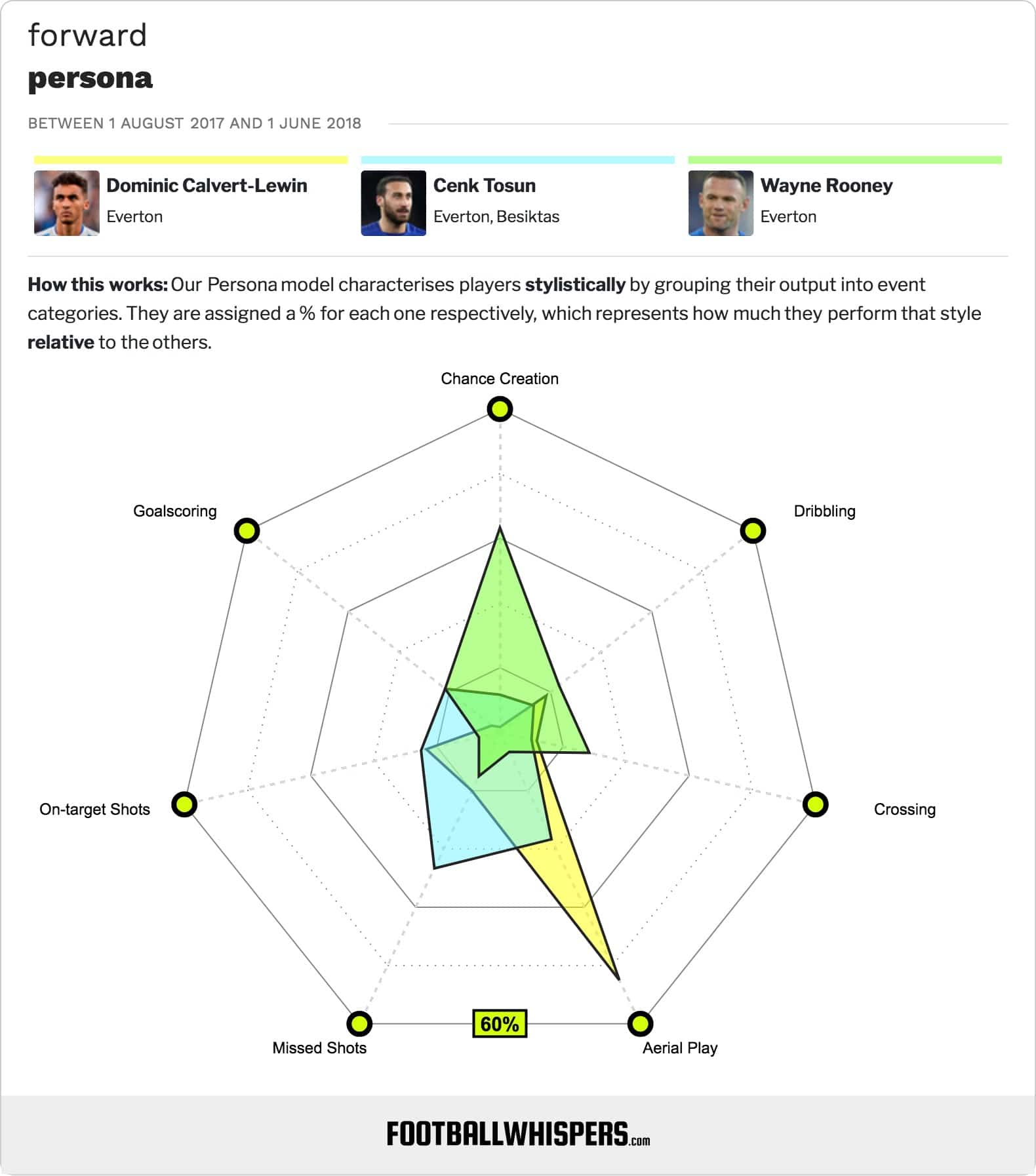 The signs closer to goal are favourable for Calvert-Lewin, too. Last season, he had 2.02 goal-scoring chances per 90 minutes and 4.05 touches in the opposition box per game. That shows his willingness to get himself into good positions and compared to Tosun in particular, who had 1.72 chances to score per 90 and 3.26 touches in the box. He's a danger.

Yes, Rooney played in a deeper role last season but you sense that a Calvert-Lewin and Tosun partnership has big potential if Everton want to play with two up front next season.

Above, we mentioned the 21-year-old's ability to bring others into play and not just find the back of the net but also have a hand in them. And he trounced Tosun and Rooney when it came to assists. Per 90 minutes he had 0.24 – six overall – compared to Rooney's 0.7 per 90. Tosun didn't get any.

It doesn't stop there, either, as Calvert-Lewin was superior when it came to successful take-ons, completing 0.93 per 90 minutes, while Rooney's was 0.43 and Tosun's was 0.36.

Indeed, the statistics certainly show Calvert-Lewin was Everton's all-round, better forward last season. Rooney may have grabbed ten goals, but he's been doing it in the Premier League for the last 15 years and so the potential signs Calvert-Lewin brings is impressive early in his top-flight career.

Aerially, Calvert-Lewin recorded better than AFC Bournemouth's Josh King (2.49 per 90 minutes), Callum Wilson (0.72 per 90) and Jermain Defoe (0.16 per 90), so he would certainly make a difference in that department.

All three, however, evidently had more prowess with their touches in the opposition box, ranked inside the top 30 players, compared to Calvert-Lewin in 58th position.

Of course, goals are a key statistic when looking at comparing and suggesting whether Calvert-Lewin would be a good fit on the south coast. King scored 0.29 times per 90 minutes, Wilson 0.37 per 90 and Defoe 0.33 per 90, compared to Calvert-Lewin's 0.2 per Premier League match.

So, perhaps you could argue that Bournemouth don't need Calvert-Lewin unless they're looking for someone to replace Defoe, with King and Wilson proving more accomplished finding the back of the net. It would still be a shrewd signing, however.

Calvert-Lewin will want to prove himself to new boss Marco Silva this summer, and based on last season's findings, Everton would be silly to dispense of his services and potential so soon.

There's more to come, that's for sure, and Everton perhaps need him more than Bournemouth.