One of Everton’s transfer policies in recent seasons has been to sign the best young English talent from other clubs, and slowly introduce them into the first team at Goodison Park.

The strategy has worked to some extent, with Holgate and Lookman showing great promise, the latter especially during his time on loan in the Bundesliga at RB Leipzig.

Holgate has been a useful squad player thanks to his ability to cover various positions in the backline, but this has often been out of necessity rather than the deliberate and careful blooding of a young defender.

Of these players, Calvert-Lewin has played the most minutes, and the Under-20 World Cup winner played a vital, if not always entirely effective, role in the Everton side during a difficult period.

When Sam Allardyce took over at the club, the transfer window was closed, and Calvert-Lewin offered himself up to do a job for the team he might not particularly have wanted to do.

He was an outlet in the air, and on the ground, but mainly in the air as the data shows.

In the win at home to Huddersfield Town towards the end of 2017, he won an impressive 13 aerial duels, scoring one and assisting another.

His overall aerial success was mixed, and though he was up there with the best in the league in terms of amount of duels won, he was also high up on the aerial duels lost chart.

His totals compared with some other British target men are shown in the graphic below and indicate that he was willing, if not always able. However, sometimes all that is needed is the distraction up front, regardless of how many duels the players is adjudged to have won. 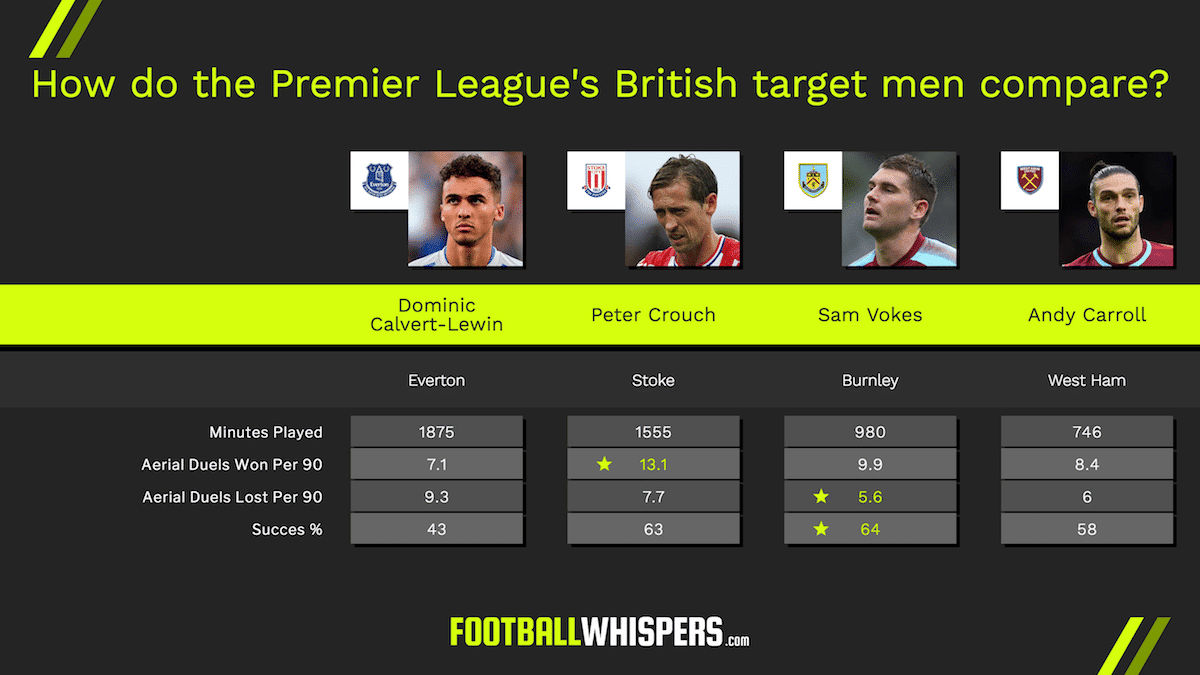 His time under Allardyce will serve him well for the future, and wasn’t entirely unsuccessful despite the unconvincing results shown in the data. He was very much a temporary option in this role, and a new manager – most likely Marco Silva – will do well to use him as an all-rounder, rather than just a target man.

He has shown he can play in any of the three forward positions, able to perform in wide positions as well as through the middle, and could be a useful squad player for the new manager.