The Belgian may have been a divisive player, with fans often questioning his work rate and fitness, but he was a reliable and regular goal threat. During his two years at Old Trafford, no player could match the 42 goals he managed across all competitions.

It was viewed as a risk not to replace him and those concerns appear to have been vindicated early in the new campaign. We may only be five games into the season but United's return of eight goals (four of which arrived in the season opener against Chelsea) mean they're already eight behind Manchester City and trail leaders Liverpool by seven. 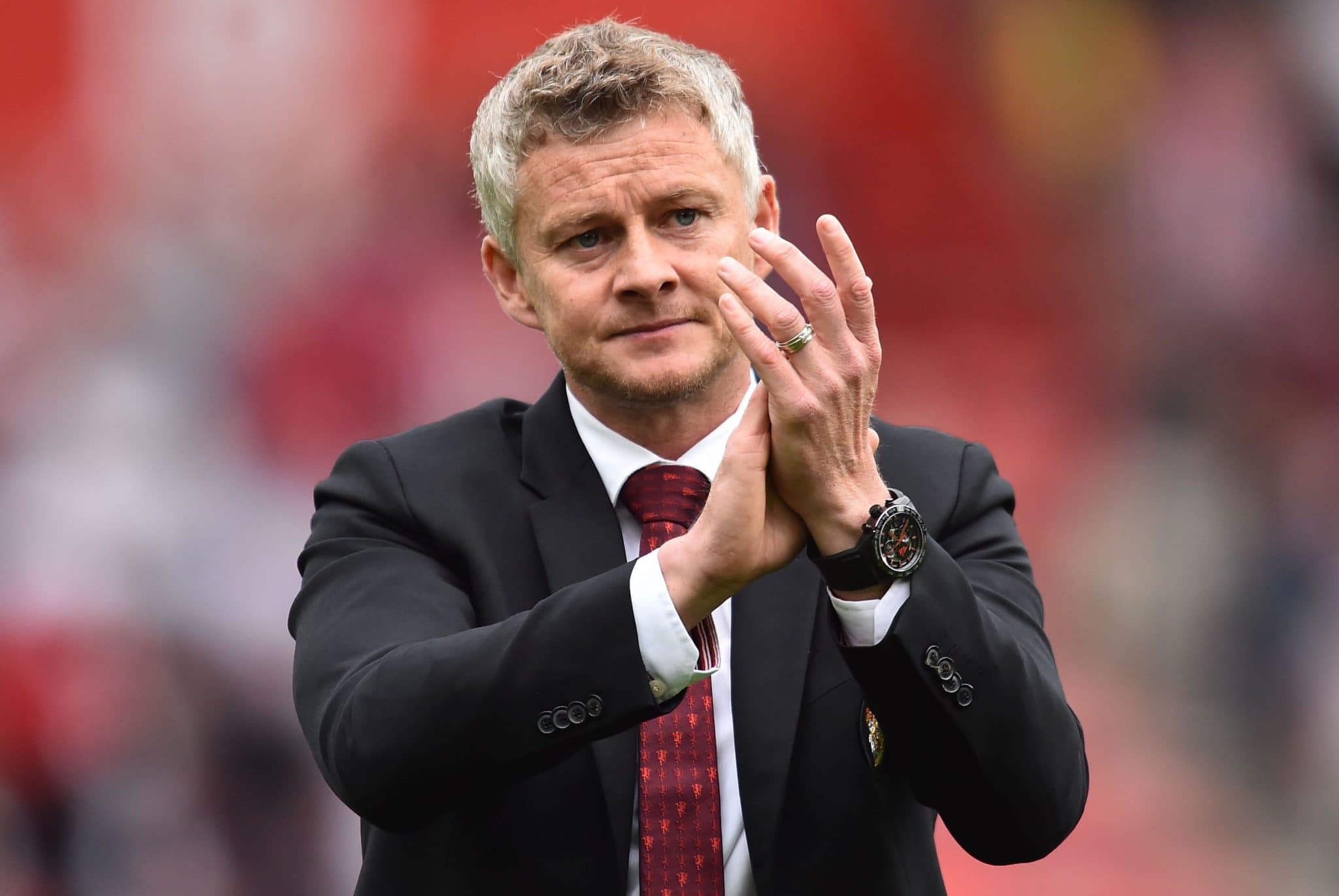 An average of a goal per game since the destruction of Chelsea isn't good enough for a team looking to challenge for a place in the top four, especially when you consider the quality of the opposition Ole Gunnar Solskjær's men have faced.

It was only going to be a matter of time before the Red Devils were linked with a forward or two. The big surprise, however, is the player reportedly on their radar.

Bournemouth's Callum Wilson is on the club's wishlist according to reports in the MEN. The Daily Mail claim Chelsea are also in the mix for the England international but that the Cherries would want at least £75million to part with the 27-year-old.

At first glance, it appears to be an eye-watering fee and one Bournemouth can't hope to receive. Wilson's current deal lasts until 2023 and the South Coast side do not need to sell. It would have to be an offer they simply cannot refuse.

United have money in the bank after the sale of Lukaku. But they'd have to be sure Wilson was the right man if they were to sign off on such a deal. On paper at least, the Bournemouth No.13 ticks a lot of boxes. 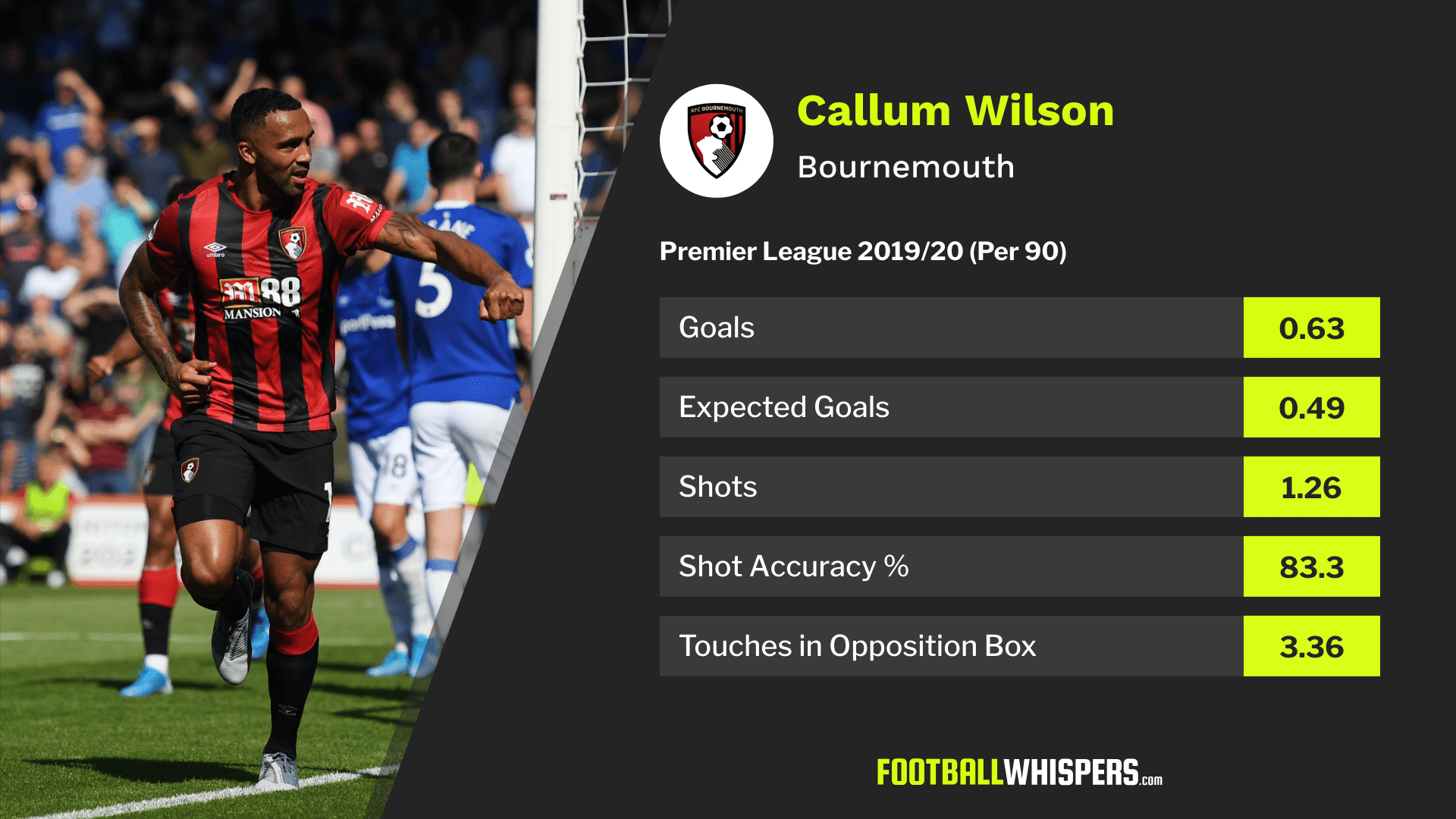 He's already been involved in four goals this term, netting three times and assisting once, and he looks set to better his return of 14 goals and nine assists last year.

One notable thing from his hot start to the new season is his shot accuracy. Landing more than 80 per cent of his efforts on target just isn't sustainable and this will likely trend downwards towards the 43 per cent of last season.

During the 2018/19 campaign, Wilson slightly underperformed his expected goals average of 0.52 but that isn’t anything to be alarmed by. He regularly finds himself in good positions and he is, by definition, a goal-getter.

However, Wilson is an all-rounder. He likes to drop deep and link play and he's comfortable running the channels to create space for others. The former Coventry City striker is not a pure poacher who sets up camp in the penalty area. That's exactly the sort of striker United need with their current attacking system very fluid and the players extremely interchangeable. 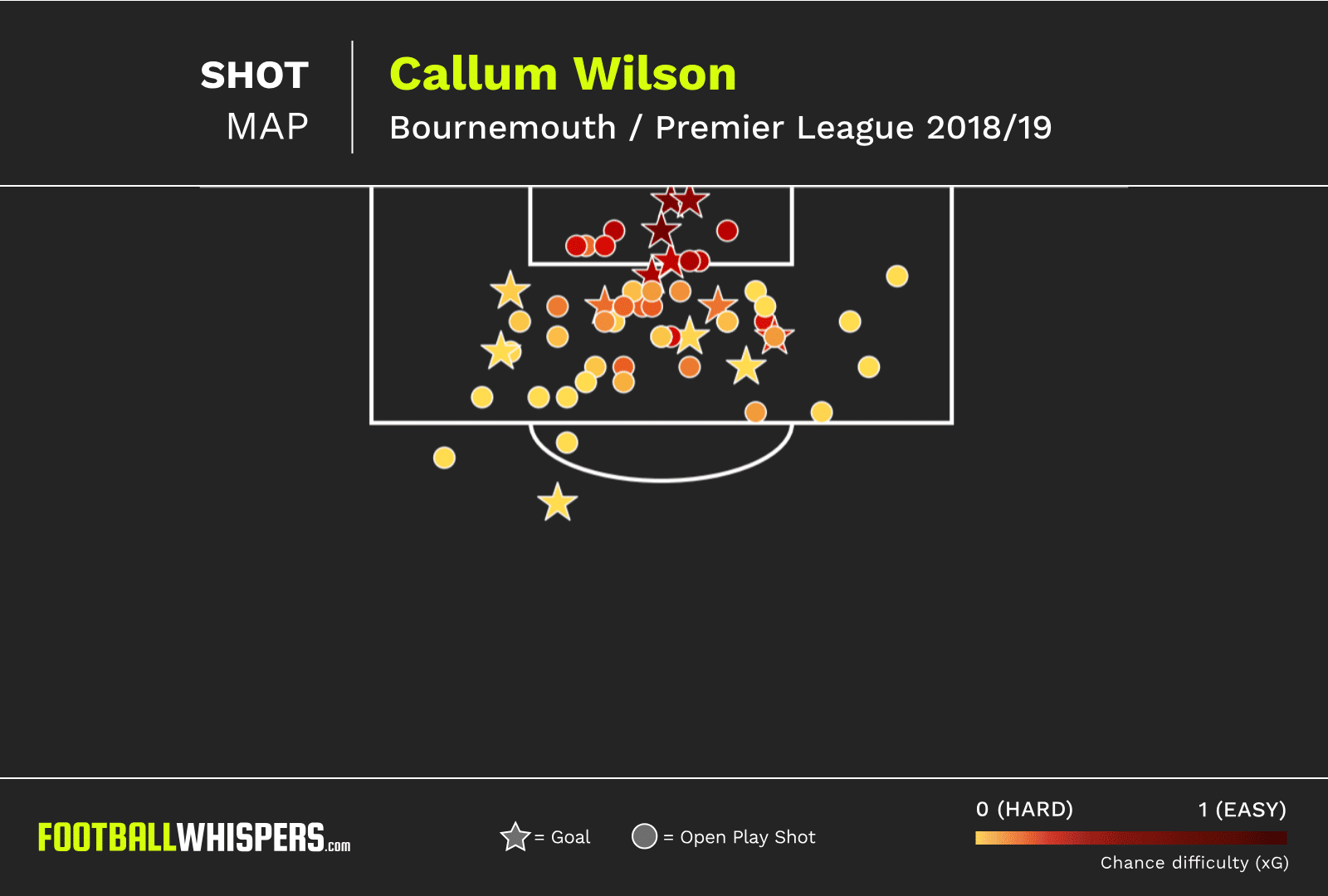 However, perhaps his biggest selling point is just how predictable he is. His shot map from the 2018/19 season (above) could be used to define the Bournemouth man as a player.

He takes very few low-value efforts, with just three shots all season coming from outside the area. Those taken inside the box were all fairly central with a high percentage of them coming in or around the six-yard box. Wilson gets himself into dangerous, high-quality positions on a regular basis.

The 27-year-old has done it for three successive seasons now and there’s no reason this shouldn’t continue. If anything, Wilson’s output is likely to improve if he’s alongside better players.

Given United are in the market for a player who scores scruffy goals, according to reports a couple of weeks back, the Bournemouth forward does possess that trait of being in the right place at the right time to score the simple efforts. It's something the Red Devils currently lack and a wrong they're trying to right.

Bringing Wilson to Old Trafford would be expensive but he could be the difference between a top-four finish and playing Europa League football. He would be worth every penny.