For months Chelsea fans waited patiently. Countless newspaper reports claimed Callum Hudson-Odoi had agreed a new contract with the club he joined as an eight-year-old, but there was nothing official.

Until this week. On Thursday night Chelsea announced the 18-year-old winger, who had been courted by Bayern Munich in January, had signed a new five-year deal with the Blues.

“It’s been a long wait but it’s done now and I’m really happy about that,” Hudson-Odoi told the club's official website after the contract was announced.

“I’ve been a Chelsea player since I was eight and this is the right club for me to be at. I’m delighted everything has been agreed and now I’m just looking forward to properly getting back.’

Hudson-Odoi's new deal will, according to The Telegraph, see the teenager earn around £120,00 a week. It is a big contract to hand out to a player with just 12 Premier League appearances to his name yet one which reflects his status as one of Europe's most promising young players.

Such a salary does, however, come with expectation. While many players his age are given time to feel their way into the senior game, Hudson-Odoi will need to produce when he returns from injury.

He will have to consistently affect the big games, ensure he impresses against the toughest of opponents both domestically and in Europe. It will not be easy – especially after such a lengthy injury – but Hudson-Odoi's talent is without question.

Nor is his application. When the youngster hobbled off the pitch in April having ruptured his Achilles against Burnley, he was expected to miss at least six months of football. Yet he could make his first-team return against Liverpool this afternoon, a recovery time of exactly five months.

His age – it's rare for teenagers to suffer Achilles injuries – has helped but it's a testament to the winger's work ethic and mental fortitude that he has recovered so quickly.

Hudson-Odoi is a young player in a hurry; one who knows how to maximise his talent and reach the top of the European game. He proved as much last season under Maurizio Sarri.

The Italian coach stifled the youngster in the early months of the season, especially when it came to Premier League football. Hudson-Odoi didn't make an appearance in the top-flight until Boxing Day and started just the four games before his season was ended early.

It was in the Europa League, though, where Hudson-Odoi built his reputation. He made nine appearances, scored four goals and claimed two assists. The quality of opposition may not have always been elite level, but it was obvious the teenager was ready for more. 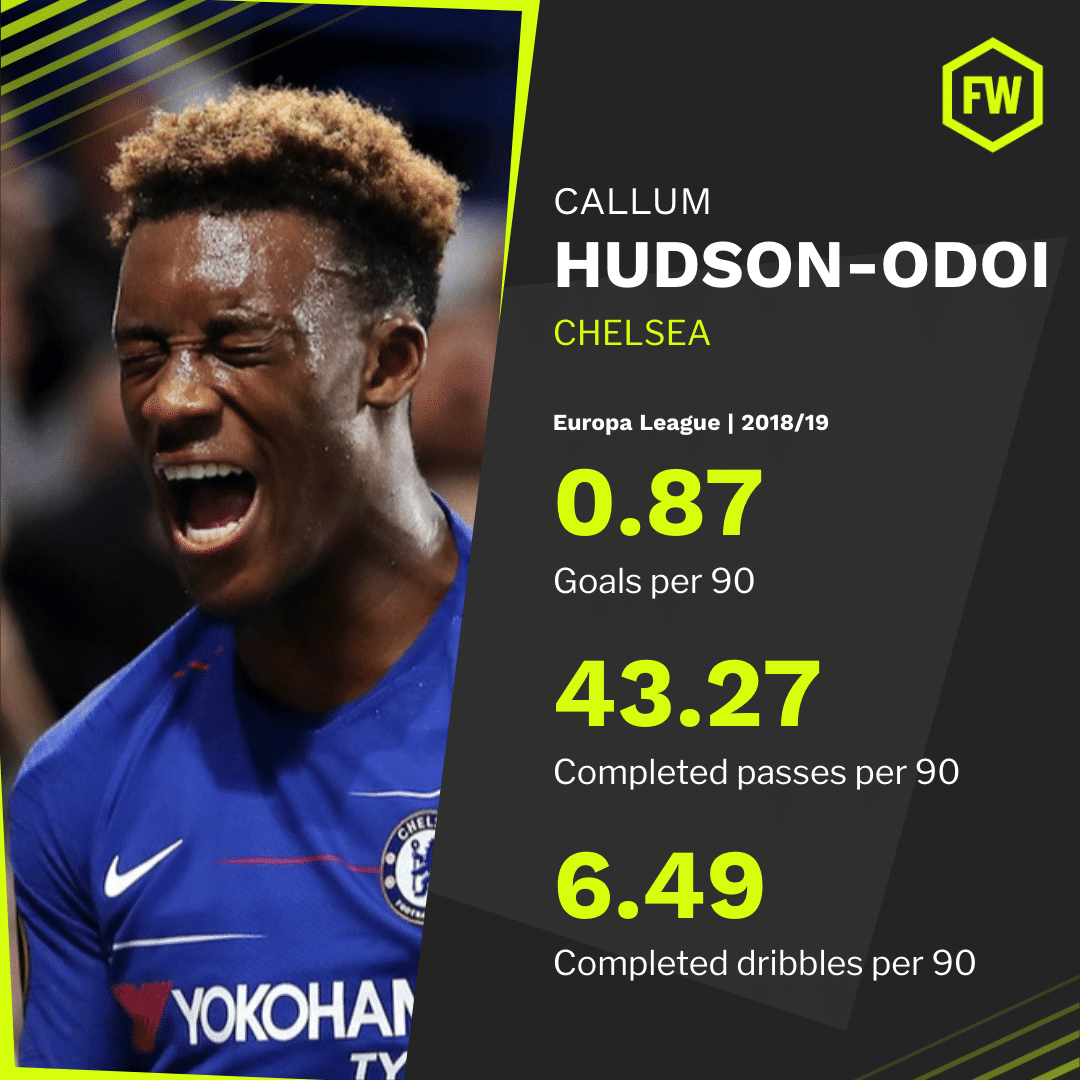 Among attackers in last season's Europa League – which included the likes of Pierre-Emerick Aubameyang, Luka Jović and Dries Mertens – Chelsea's young star was second for shot assists per 90 (2.59) and dribbles completed per 90 (6.49).

Quite simply, despite his inexperience, Hudson-Odoi was one of the competition's best players. His form resulted in an England call-up in March and he became the second-youngest player to make a competitive appearance for the Three Lions.

Hudson-Odoi rode the crest of a wave last season. Momentum carried him from milestone to milestone, achievement to achievement. He might not find it so easy this term, having not undergone pre-season training and having to adapt to a new head coach.

However, Frank Lampard's confidence in the club's No.20 is absolute. “I am not going to say things that are pie in the sky but, with his talent, Callum can be central to this team and he can be central to England,” said the Blues boss in July.

“He can show, right here at Chelsea, the team he came through the academy at, that he is going to be a world-class player. I truly believe that.”

There is an open spot for Hudson-Odoi in this Chelsea team. Mason Mount has locked down one of the attacking positions but the other is very much up for grabs.

Willian, Pedro and Christian Pulisic have all failed to cement their spot in the side. The homegrown winger can take advantage and establish himself as the fourth academy graduate to become a first-team regular under Lampard.

Hudson-Odoi's new contract ensures he comes with a big billing. But he showcased last season he can live up to the hype. It's time to prove himself all over again.